The title just about says it all really: Wells Fargo (WFC) stock looks pretty darn cheap right now. The San Francisco-based bank has lost over 50% of its value since the start of the year. Truth be told, I actually thought that it was a bargain back then too! Anyway, the S&P 500 is now only down around 11% in 2020 – just to put Wells’ struggle into some context.

The bank obviously faces a litany of issues, of which the coronavirus downturn is front and center. It recorded a $4,000m provision expense for bad debt in 1Q20, up around $3,200m on last year. Net charge-offs in the quarter came in at $940m, up $245m on last year. That pretty much tells you what you need to know. The bank – like all of its peers – is setting aside a lot of money for bad debt ($3,100m in 1Q20 alone, above and beyond its actual net charge-offs).

What else has gone wrong here? Well, interest rates heading south again is having an impact. It has other revenue sources, though clearly it makes a chunk of its money from net interest income. Suffice to say, that will come under pressure from lower rates. The other thing I’d touch on again briefly is the bank’s legal woes. I covered that a few months back so won’t rehash it. However, the associated costs as well as the asset cap have clearly weighed on profit here.

For the most part, the above issues are not confined to Wells Fargo. They are simply a feature of being a bank, and we know banks are cyclical beasts. On that basis, I’d ask two questions of a potential investment in Wells Fargo stock right now.

First and foremost, how well placed is the bank to weather the storm? On that one, I think Wells gets a solid pass. Bear in mind, this thing generated around $4,700m in pre-prevision income last quarter. It actually reported a very slight net profit in the quarter, so it has scope to absorb its provision charges.

On that basis, I think Wells is actually in pretty good shape, all things considered. Its share repurchase program is obviously on hold, and that will help its capital ratios as we navigate the worst quarters. It has room to absorb more losses and still come out comfortably on the other side.

The second question I’d ask: how cheap is the stock? Well, the opening paragraph tells you my view. Granted, earnings will take a big hit here this year, but it’s the same story everywhere in the banking sector. I want to know how much the bank will make in more mild economic conditions.

In the years preceding the current crisis, earnings power was somewhere just above the $20,000m per annum mark here. Wells has done a pretty good job annihilating its share count in recent years, so we could actually see that figure drop a fair bit without hitting the per-share numbers. Obviously it then had its legal issues – costing it a few billion dollars so far – and now the current downturn. 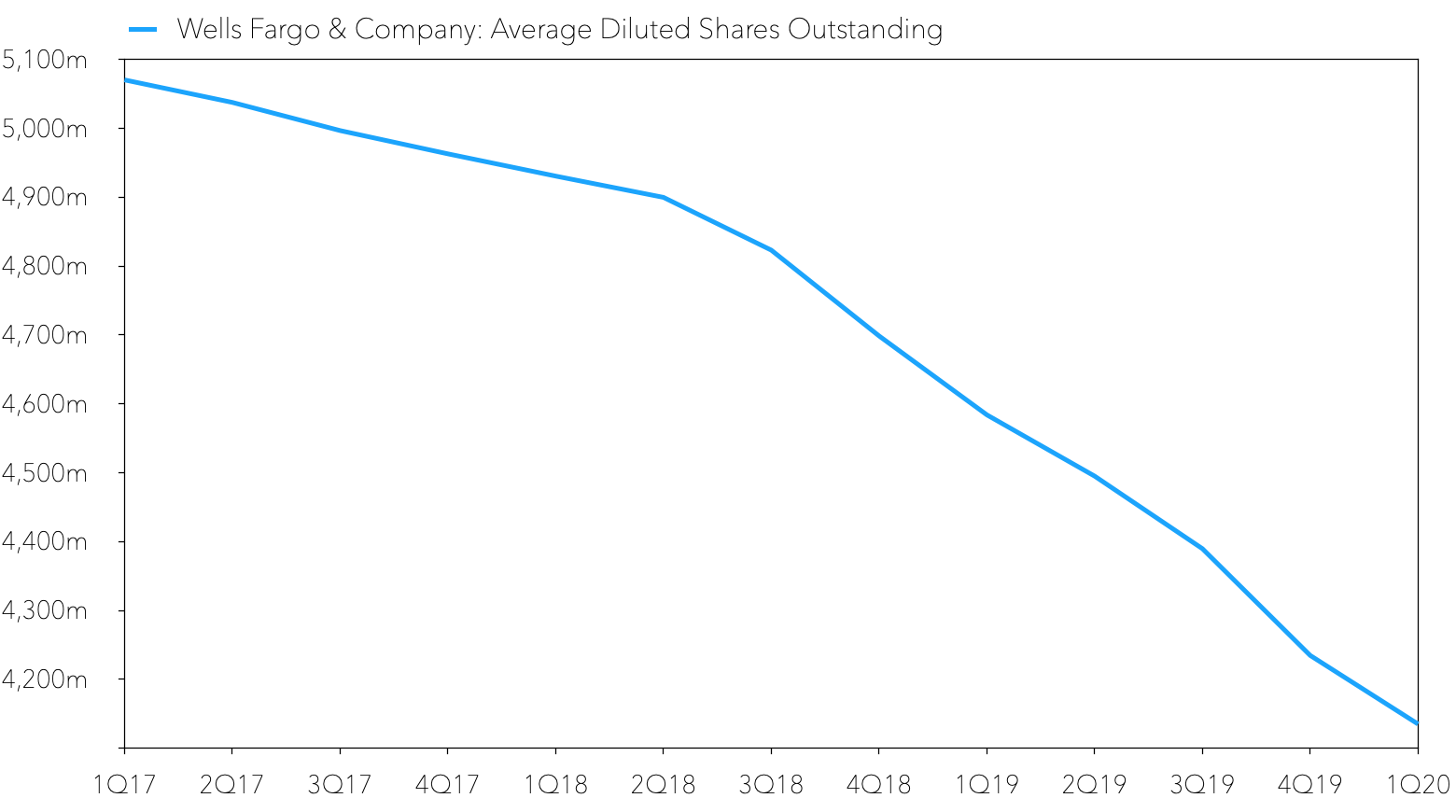 Anyway, let’s err on the side of caution and go with a figure of $15,000m. The bank’s current market capitalization stands at around $105,000m. Even if we write off 2020 (which we should) and 2021, that strikes me as unduly cheap. I mean, it puts the stock at a forward earnings yield of around 14%. Even if that only applied for 2022, it still strikes me as very attractive.

As for its dividend, well, it currently runs at an annualized rate of $2.04 per share. I don’t really care if the bank cuts it this year. I mean, banks take on more regulatory pressure compared to other sectors of the economy. Here in the UK, banks were essentially ordered not to pay out dividends. I believe the situation is similar across the Channel in Europe.

The way I see it, if Wells were to cut its dividend unnecessarily, then it simply stores up capital it will release later on. If it does need to preserve capital, well, that means a cut is necessary in any case, with or without an order coming from above.

If you take a ten-year look at things, it seems likely to me that Wells Fargo will pay out a substantial chunk of its current stock price by way of cash distributions. Heck, it may even return more than its current share price that way. Suffice to say, that is a very attractive place to be in. If this thing simply returns to a 5% dividend yield, then we are back to a $40 stock once again. The current share price is a shade under $25.40. Whichever way you slice it, Wells just looks incredibly cheap right now.

I like WFC at this price and just added few days ago a $26.7.
will add few more.

Banks is a good business, if they don’t do dumb things…..