The Story Of Agnes Plumb

We are starting to build up a little library of dividend millionaire case studies on the site. The ones I find most interesting cover folks from the lower and middle-income brackets. I’m talking about the likes of Margaret Dickson, Paul Navone, Ronald Read and Anne Scheiber. The latest one – the story of Agnes Plumb – is slightly different, but let’s start with some background before getting on to that. Plumb passed away in October of 1995 at the age of 88. If my math is correct then that puts her date of birth at some point in 1907. Like many of our millionaire investors, Agnes Plump never married or had any children. She also lived in the same house in Studio City, California for almost sixty years.

There are two things that make Agnes Plumb’s case special. The first is that we are dealing with intergenerational wealth creation. The folks I’ve mentioned before literally started with nothing: the portfolios they amassed were built up during the course of single, albeit fairly long, lifetimes. In this case, our millionaire actually inherited assets from her father. If you’ve ever wondered about passing stock down – to a child, grandchild, niece/nephew, whoever, then read on to see how crazy it could get.

The second point is really staggering: it looks like we are dealing with a single equity investment and nothing else. In the previous cases we would often see dozens of assets in their portfolios. Not just stocks either, but bonds and other asset classes as well. In Plumb’s case we apparently have one single stock and that’s pretty much it it. As for the identity of this stock, it is stodgy old Kellogg Company (NYSE: K). 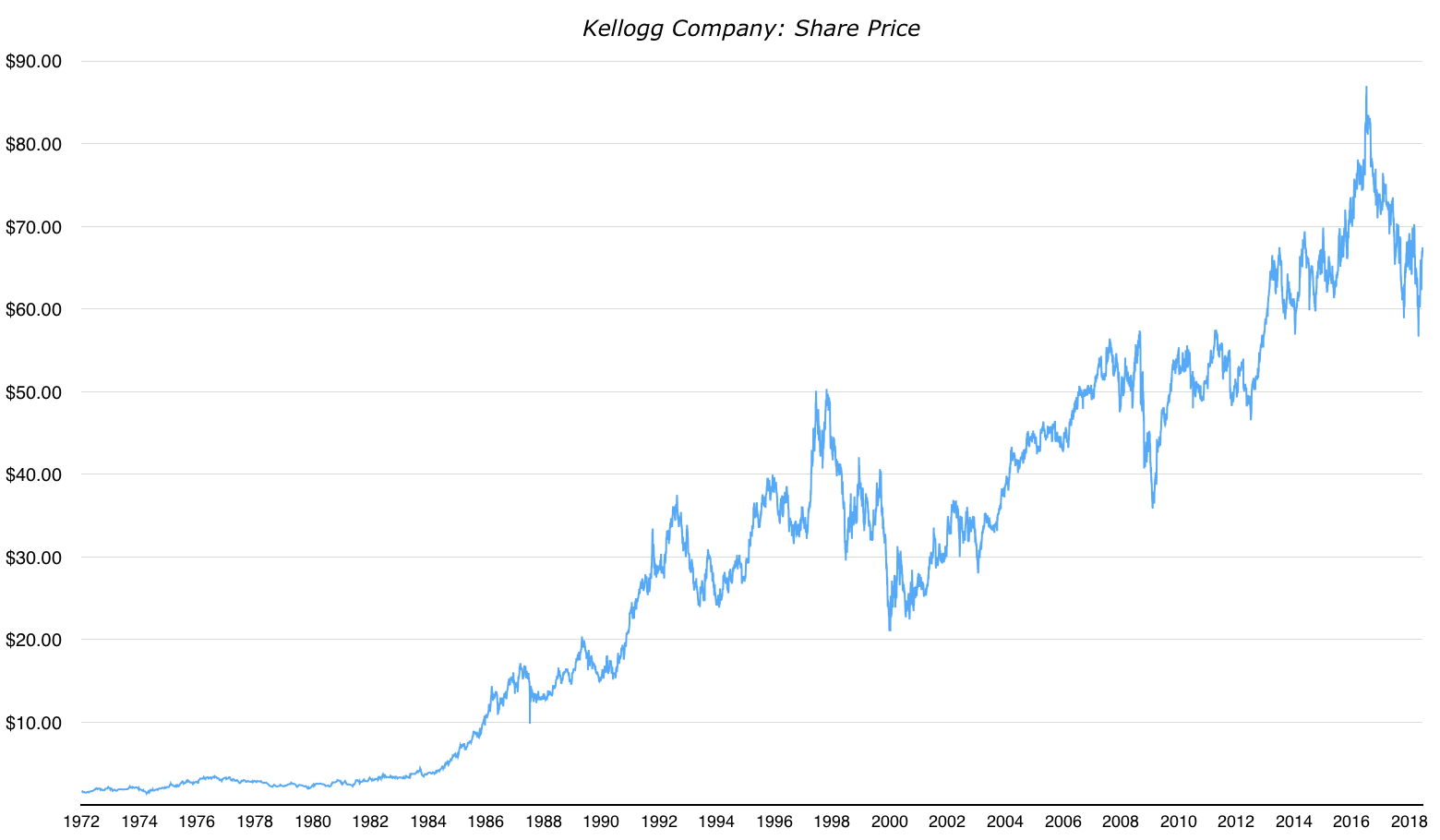 Now, the background of how Plumb’s father acquired his Kellogg stock is a bit hazy. According to one article he actually knew the founder, Will Keith Kellogg, in a personal capacity. Kellogg implored Plumb to invest in his venture, which he did to dramatic effect. Given the company’s founding in 1906 (with Agnes born in 1907) that at least makes some chronological sense.

Unfortunately there’s no indication as to how long he held his Kellogg stock. In any case Agnes Plumb certainly held it for four or five decades. The end result is orders of magnitude higher than the cases we have seen before. At the time of her death Agnes had amassed roughly 1.3 million shares of Kellogg stock. That was in 1995, two years before the company last split its shares two-for-one. In today’s terms that therefore means roughly 2.6 million shares of Kellogg stock. On the day she died, Kellogg was trading at around $37.50 per share after adjusting for that 1997 stock split. She was sitting on a near $100 million fortune consisting almost entirely of Kellogg shares.

I had a quick look at Kellogg’s dividend history before starting this piece. It turns out that when she died Kellogg’s annual dividend was running at seventy-five cents per share (split adjusted). Call that 19 cents per share each quarter. Now, since Agnes actually held the physical Kellogg paper certificates this almost certainly meant that she was also being mailed physical dividend checks. Imagine opening your mailbox to find a check worth nearly $500,000 with your name on it. That was happening to Agnes Plumb every three months and hardly anybody even knew about it.

As with nearly all of these cases the entire estate was passed on to good causes. In this case the Crippled Children’s Society, the Orthopaedic Hospital in Los Angeles, UCLA School of Medicine and the St. Jude Children’s Research Hospital in Memphis each got $22.50 million. Let’s imagine for a moment that these four beneficiaries didn’t cash in their shares. They each just sit on their respective quarter of Agnes’s 2.6 million split-adjusted shares. Today, each Kellogg share pays a quarterly dividend of fifty-four cents per share. On that basis each beneficiary would be sitting on a total pile of shares pumping out $350,000 in quarterly dividend cash. Their respective quarter of Agnes’s original $100 million fortune would be worth roughly $45 million.

Unfortunately I’m not sure when the Plumb family first acquired their Kellogg stock. What I do know is that since 1950 Kellogg has increased its annual dividend by 9% per annum on average. Since 1960, the comparable figure is 8.5%. Since 1970 it is 8%. I’m sure you can see the trend here. The point is not that Kellogg will repeat this remarkable story of wealth creation, but as Phil Fisher remarked: “If the job has been correctly done when a common stock is purchased, the time to sell it is – almost never”.