A couple of things might strike you as counter intuitive about investing in the stock market. One is that groundbreaking new industries don’t necessarily equate to high shareholder returns. Another is that vastly different outcomes can occur from notionally very similar investments. Take Coca-Cola stock as an example of the latter. Back in the late-1990s there was a bit of a bubble in Coke stock, enough to send it to about 34x earnings. Given its growth outlook and prevailing interest rates, that was clearly a frothy valuation.

Let’s say you invested at the worst possible moment of Coke-mania. That probably occurred sometime in July, 1998. The stock traded at a split-adjusted price of $43 back then, almost exactly where it trades today. That’s the level of capital impairment we are talking about. Now imagine the same person waited just a couple of months instead and bought in at the beginning of October. In that case, they paid just $28 per share. The difference between those two investments, July versus October, is huge in terms of returns. We are talking around 1.5 percentage points per annum. That might not sound great, but on a $20,000 investment it adds up to an extra $10,000 or so. Coke the company hadn’t changed at all; Coke the stock had changed a lot.

The point about those vastly different returns is that they force you to think about expected value. In other words, what’s the best that could happen, and what’s the worst that could happen? Best case scenario for Coca-Cola stock in July of 1998 wasn’t that good – mediocre returns as earnings grew to fit a bloated valuation. The worst case scenario was years of dead money. By October, even though you’re only talking three months, you see a better “best case” scenario and a not-so-bad “worst case” scenario.

Let’s imagine investing around the time of the Wall Street Crash. With hindsight we know that this was probably the worst time that you could possibly have chosen, with the aftermath producing an epic market crash and ensuing economic catastrophe. Consider an investment in the market at its peak in September, 1929. Average stock prices were approximately 30x earnings at this point, and average price-to-book ratios were around the 3x mark.

Given these are average figures, they tend to mask the euphoria going on in certain areas of the market. Bank stocks, for instance, had reached truly stratospheric valuations. National Bank of New York traded at 13x its book value with an average price-to-earnings ratio of 120x, just to give you some context. The Dow Jones Industrial Average (DJIA) had spent the last decade compounding at a rate of about 25% a year. Then the crash happens, and leading stocks trade within wild ranges on an intra-day basis. Standard Oil of New Jersey (later becoming Exxon Mobil) went from a closing price of $73 per share on the Wednesday, to a low of $61 per share on the Thursday, and then back up to $68 per share by that day’s closing bell.

By the end of 1930, the DJIA was down nearly 60% from its prior-year peak. What’s worse is that this was just a sideshow to wider problems in the economy and for corporate America. Corporate earnings totalled $9B in 1929; the following year they came in at $3B. The unemployment rate hit 24% by 1933, exploding by a factor of nine in the space of four years. Real GDP collapsed some 30% from peak to trough. It surely goes down as the worst catastrophe in modern economic history.

Let’s concentrate on stock returns over the period. Given the horrible declines in GDP and corporate earnings, you are not really expecting very good returns in the subsequent few years. In fact, you are probably assuming a total disaster. Even more so considering you put your money in during the 1929 peak. Consider some earnings-per-share data during the early years. For instance, Coca-Cola stock traded between 13x and 19x annual profit in the year of the crash. It traded at about 8x annual earnings four years later. Profit fell from $10.25 per share, to $8.82 per share in that timeframe, though the business held up quite well overall. 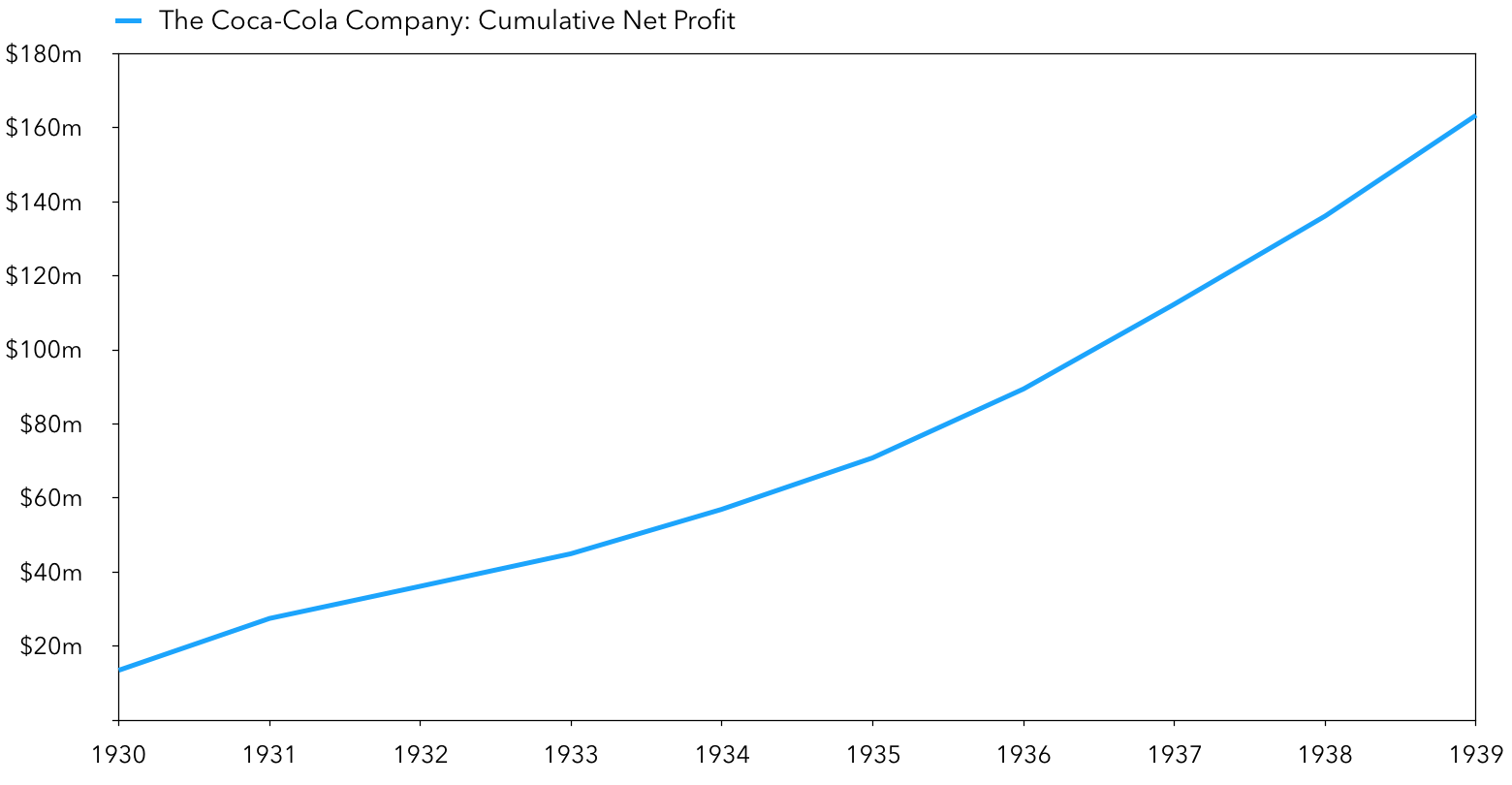 How about some more household names? General Mills saw its profit per share fall over 25% between 1929 and 1933. IBM saw a very similar drop in its earnings. General Electric, which had earned $2.40 per share in 1929, saw profit collapse to $0.38 per share four years later. Gillette saw its earnings per share drop by about 80%. And so it goes on. These were some of the stronger performers too.

The pattern of falling earnings, to be expected in such a savage economic environment, obviously caused havoc with stock returns and dividends. A holder of Gillette stock would have seen an 80% collapse in the share price over that timeframe. They could have picked up more stock for just 7x earnings at the low point in 1933. Colgate-Palmolive, a company that is today responsible for 40% of the world’s toothpaste by market share, saw earnings wiped out and the dividend slashed. Investors holding Procter & Gamble saw their company’s earnings cut in half and the dividend by a quarter. All-in-all, there were very few stocks left unaffected.

How quickly would you have made your money back from the Wall Street Crash? It is quite likely that the figure you will see quoted in most articles is something like twenty-five years. That is, if you put money in at the peak of the market, it would have taken twenty-five years for you to break even again. Now, twenty-five years represents a good chunk of an investing “lifetime”, probably even more so back then when life expectancies would have been lower, so it sounds like a terrible figure. You basically spend all that time with no returns to show for it.

The thing is, the effect of reinvesting dividends totally blows that figure away. It would have taken twenty-five years in one particular scenario – the one where you don’t factor in reinvested dividends. If you do include them, it would have taken you only seven years. Despite the awful economic climate, the return accelerator that you experience with reinvesting dividends at low valuations slashes the time it takes to get back to breakeven. Thirty years of doing that from the market top in 1929 would have delivered returns of about 7.5% per annum up to 1960. No matter how bad things get, taking the long approach has nearly always made it salvageable.