Citigroup: The Next Decade

For a lot of folks, the experience of Citigroup (C) during the global financial crisis is enough to automatically disqualify the bank as a serious long-term investment proposition. Unfortunately, it is just the nature of things that buying bank stocks means accepting that it is easier for a management team to blow up a Citigroup than it is to blow up a Coca-Cola. Prior to 2008, Citi had not cut its dividend since 1990. That 18-year streak was undone by a few years of risky behavior.

Anyway, before the financial crisis you had to part with around $500 just to own one share of Citi stock. Today, ten years into an equity bull market and economic recovery, you can buy the same share for under $80. At the risk of making a prediction I may later regret, we could well be into permanent capital impairment territory. I’m guessing that most of you know the story here. Citi shareholders were basically diluted to kingdom come in return for tens of billions of dollars of TARP funding.

Before the crisis, ownership of the bank’s common stock was split into roughly 4,985m shares. These days the figure is somewhere around the 2,115m mark. Now, what that comparison misses out is the massive reverse stock split in 2011. Under the terms of that split, Citi exchanged every ten existing shares for one fresh share. Or put another way, the 2,115m share count you see today is really 21,150m to the pre-financial crisis shareholder. (The cruel irony is that Citigroup made almost the same net profit last year as it did in the mid-2000s).

The situation with Citi reminds me of a quote from the founder of a California-based financial services firm. I’m definitely paraphrasing a bit here, but essentially he said that when it comes to financial crises most folks are driving while watching the rear-view mirror. Expressed a bit more succinctly, the next crisis won’t be the same as the last one. 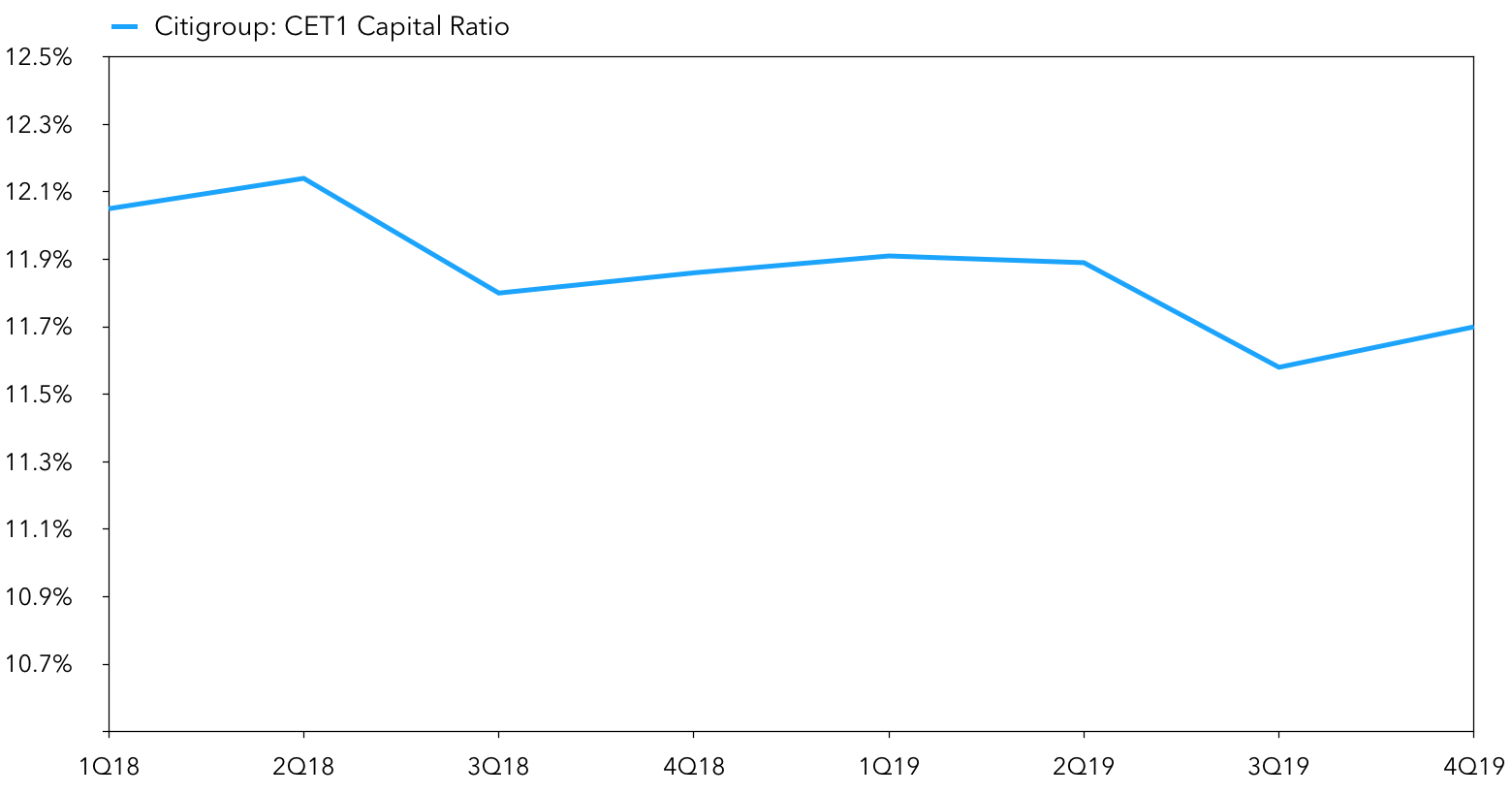 I think you could probably apply a similar sentiment to large US bank stocks. A lot of folks refuse to touch them because of what happened just over a decade ago, even though all of them are in much stronger shape these days. For instance, Citigroup currently sports a CET1 Capital Ratio above 11.5% and a leverage ratio of circa 15-to-1. It is in much more conservative shape than the years preceding the financial crisis. Back then, its Tier 1 Capital Ratio hovered in the 7.5% region and overall leverage was more like 25-to-1. In layman’s terms this means the bank has far more space in which to absorb potential losses these days.

Here’s where it gets interesting for current and prospective Citigroup stockholders. At the moment the bank is throwing off annual net profit in the $17,500m region against a current market capitalization of less than $170,000m. (Expressed in ‘per-share’ terms we are looking at around $8.50 in net profit against a current share price of around $78). Quick math puts Citi stock at just a shade over 9x annual earnings as things stand right now.

The above sets up the interesting prospect of double-digit annual returns, even ignoring any kind of organic growth. Or put another way, dividends and stock buybacks could well do the trick here. Actually I say ‘could’, but in reality the process looks like it is well under way: Citi returned over $22,000m to shareholders through buybacks and dividends last year. Going back a little further, and assuming my math is correct, the bank has returned just over $60,000m to its shareholders since the start of 2017. 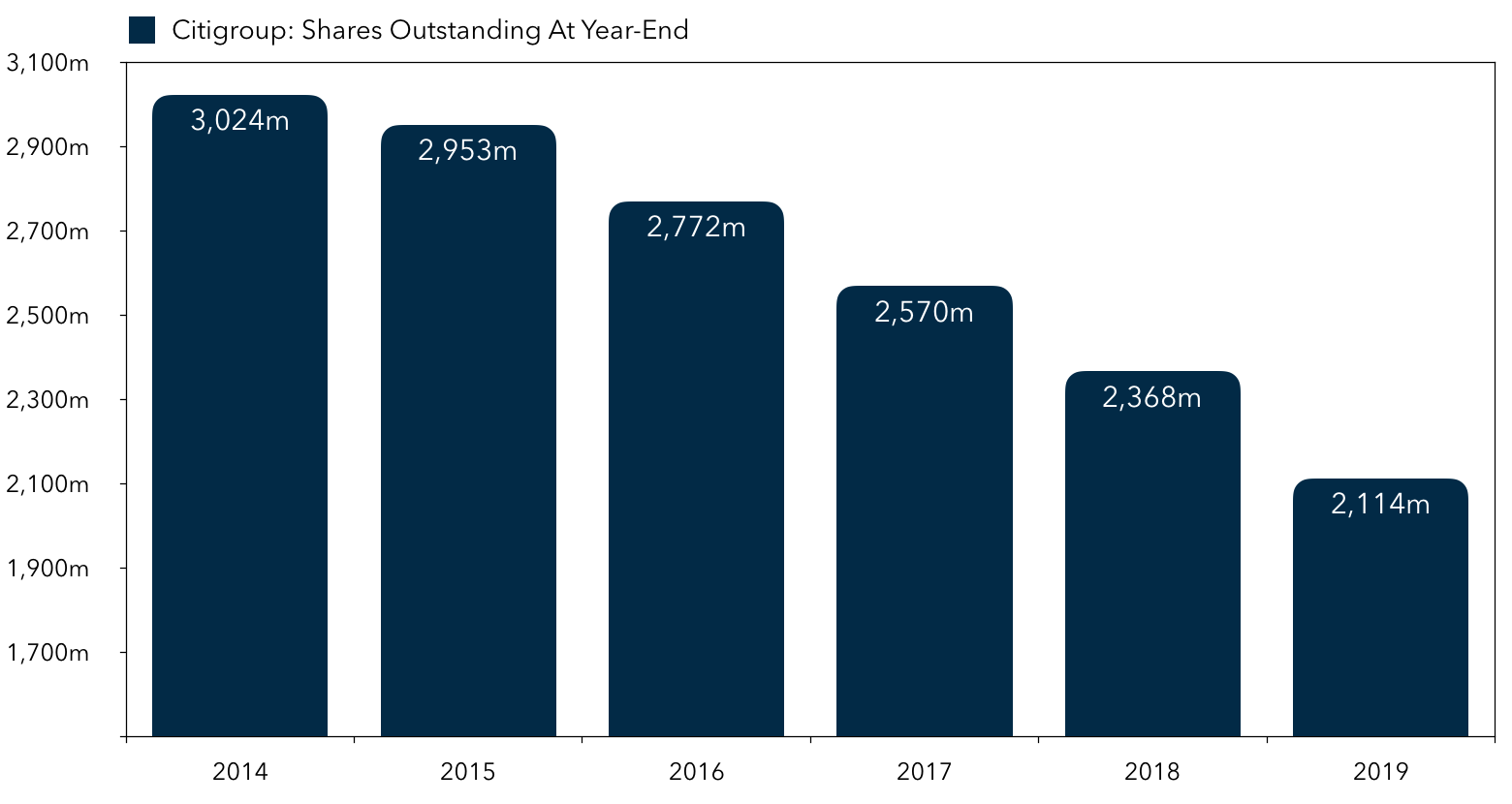 The net impact of this has been quite significant. For instance, ownership of Citigroup common stock was split into just over 2,770m shares at the start of 2017. As I mentioned right at the top of the article, that figure currently stands at around 2,115m. Citi has essentially retired around 25% of its share count in the past three years alone. The stock price is up almost 40% in that time (perhaps as a result). If you throw cash dividends into the equation, total shareholder returns over that period clock in at around 13% per annum.

Although lower interest rates will prove a headwind to the bank’s profits, my guess is that over the next decade there is a good chance that Citi will continue to post high earnings-per-share growth. I base that statement on the impact of large-scale share repurchases with some underlying profit growth too. I expect per-share dividend growth to follow a similar trajectory for the same reasons.

The final piece of the equation is the valuation multiple. As mentioned above, the stock trades on a 9x profit tag. It really doesn’t seem too much of a stretch to imagine a scenario in which that becomes 11x or 12x profit under the right conditions. Although many readers would not dare touch Citi stock, it would not surprise me to see double-digit stockholder returns here over the next decade.