Brown-Forman (BFB), the owner of the Jack Daniel’s brand of whiskey, has been a ludicrous wealth creating machine over the years. We are talking well into the double-digits in terms of average annual returns for decades now. The Brown family aside, I imagine that this thing has made a lot of ordinary shareholders very rich indeed.

Intuitively, most people recognize that Jack Daniel’s has been a marketing masterclass. I mean, think of things like the cooking sauces in grocery stores that have licensed its name and recipe. Heck, what about the people with its logo splashed on their clothing? They have paid to walk around and advertise this company’s product.

Speaking of advertising, I like consumer companies that take it very seriously. I think of Nike and its ‘Demand Creation Expense’, or Coca-Cola which, during the depths of the Great Depression, consciously chose to increase its advertising budget.

On that note, Brown-Forman is no slouch either. It has racked up $1,200m in cumulative advertising spending over the past three years. That figure is three times more than it allocated toward capital spending (in a period of high capital expenditure too). Its brands are so powerful that, in just three years or so, it will earn an amount equivalent to the cumulative value of its entire tangible asset base (the distilleries and so on).

A few years back, I had a copy of a journal detailing Warren Buffett’s purchase of Guinness stock back in the early-1990s. Now, Buffett being Buffett, he spotted that Guiness was quite similar to Coca-Cola. It earned a lot of its profit abroad, with a deceptively long runway for future growth. Unsurprisingly, the same could easily have been applied to Brown-Forman back then too. 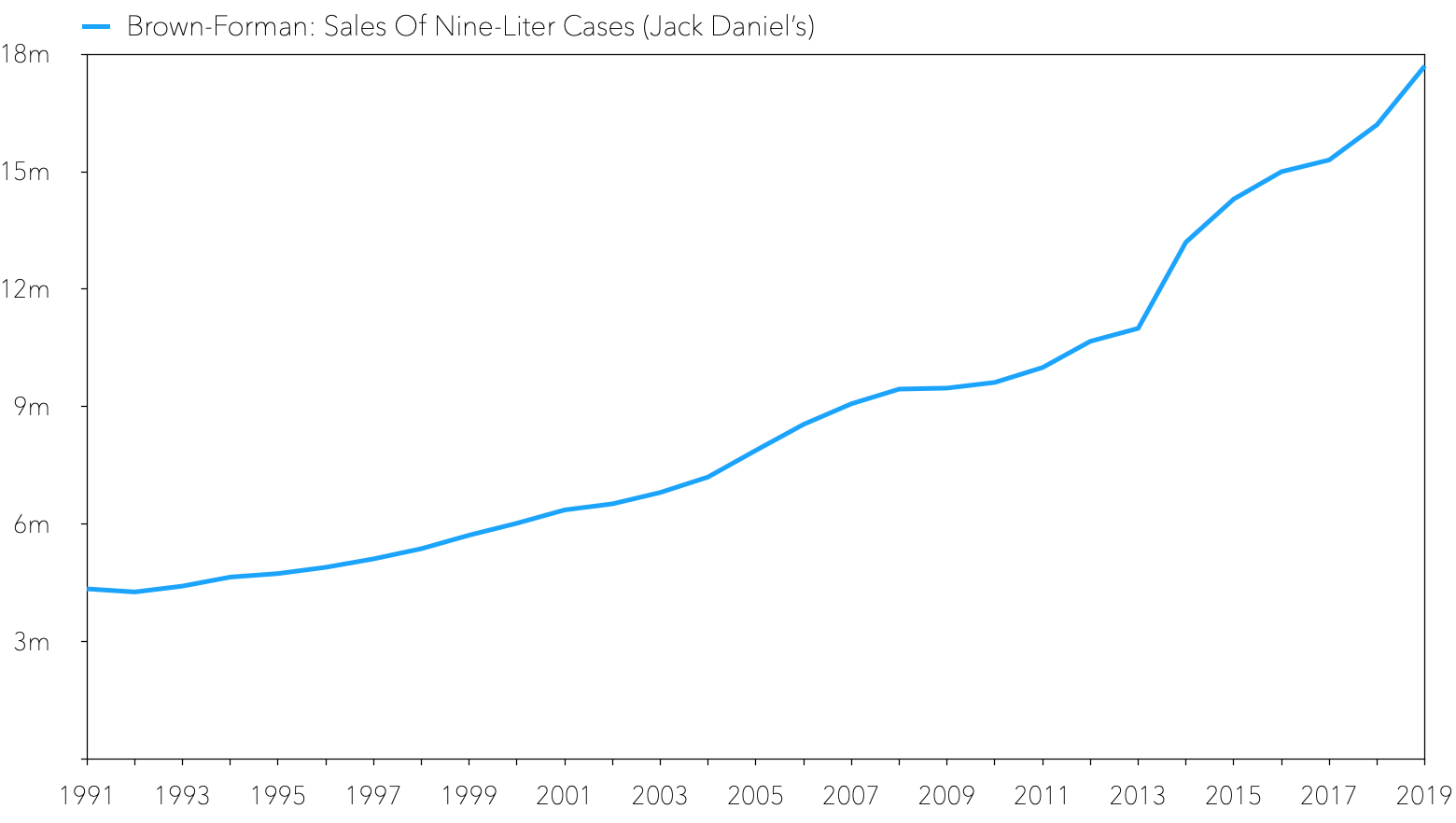 Anyway, this journal article looked at the valuations of various alcohol stocks at the time, including Brown-Forman. I believe early-1990s valuations were in the high-single digit earnings yield range – it seems crazy by today’s standards, but it was a different universe back then with regards to interest rates and so on. Suffice to say, all of this represented the perfect recipe for long-term wealth creation.

In 1990, the year I was born, the company sold just over 4m nine-liter cases of Jack Daniel’s whiskey. Last year, it sold over 17m nine-liter cases of Jack Daniel’s branded whiskey. Over the same timeframe, the company’s overall net profit has increased by a factor of six, as have cash dividends paid out to stockholders. Those are not per-share figures either, which must be higher due to the cumulative impact of stock buybacks.

That brings us nicely to the current problem with Brown-Forman stock: its valuation. Because interest rates and bond yields are so absurdly low, it is right that we give stocks a decent premium too. Anybody waiting for those high-single digit earnings yields to return has largely been disappointed in recent years.

Brown-Forman stretches that principle to the limit. I mean, the shares closed the week at just over $61 apiece. The company’s earnings power is somewhere in the $850m per annum area, so call it $1.80 on a per-share basis. That works out to an earnings yield of just 2.95%.

Now, I am quite bullish on Brown’s long-term growth prospects. It generated around half of its sales in the United States last year, with less than one-fifth coming from emerging markets. Furthermore, it pays out less than half of its profit by way of cash dividends. It can therefore use a big slug of retained earnings to power investment and growth in existing and new brands, as well as stock buybacks and so on. 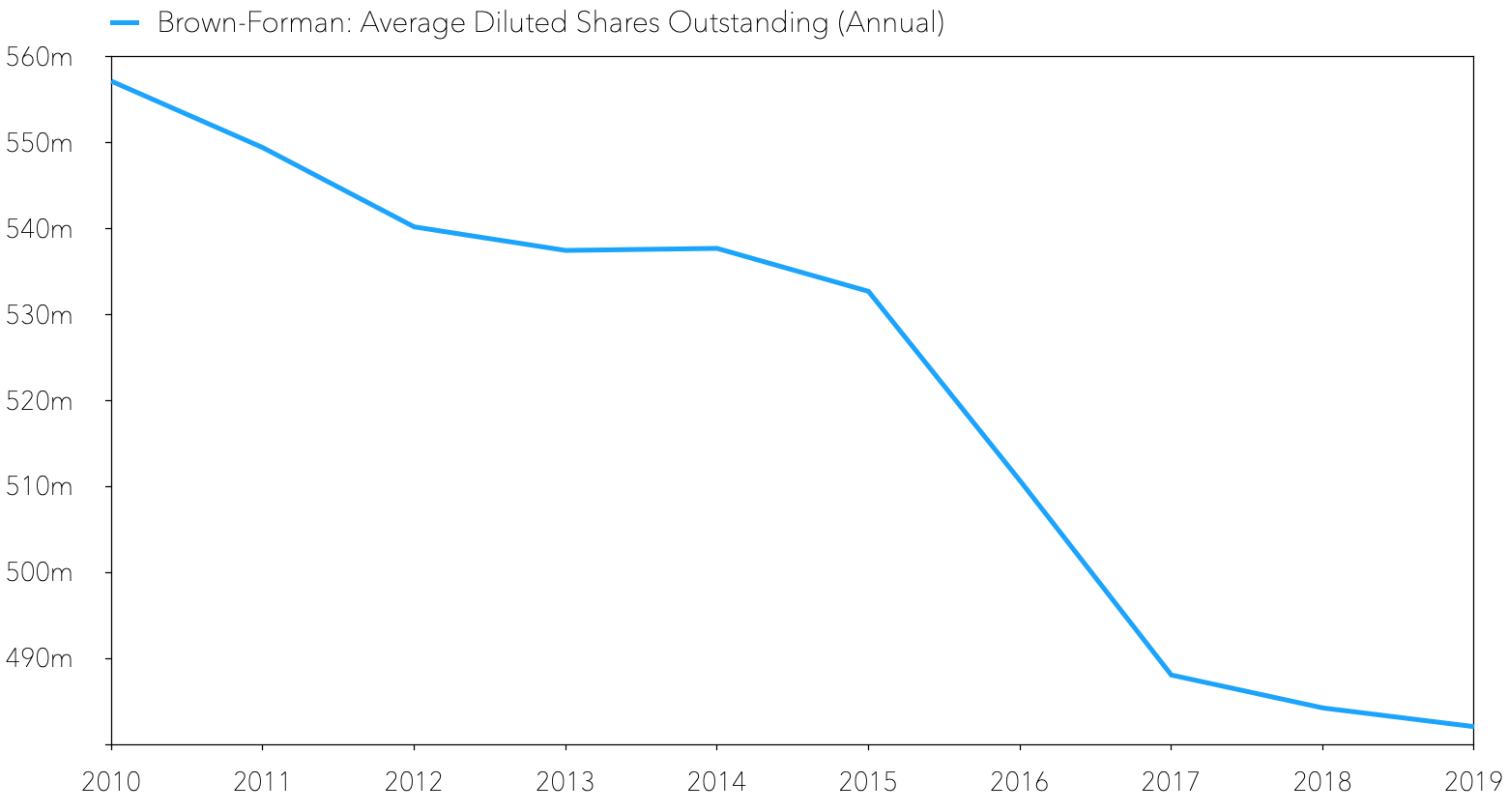 On that basis, I think it has plenty of growth ahead of it. There have been some issues with tariffs in recent years, with American whiskey being a casualty in the global trade spats, though the figures don’t seem huge to me. We are talking 6¢ or so to Brown’s annual earnings per share number from what I can tell.

Anyway, let’s assume Brown-Forman can grow its annual profit at an 8% per annum clip over the next decade. Let’s also say that its dividend grows at roughly the same rate. That would mean the company reports earnings per share of circa $3.90 ten years from now. What worries me about that is, if the earnings yield were to increase to just 5%, the share price would sit at around $78 ten years from now. Okay, let’s add $11.50 in cumulative dividend cash on top. That gets us up to $90 per share or so.

Personally, I can’t see how that is all that attractive. I mean, you could go out and buy Diageo at more than twice the dividend yield right now. Its growth prospects may be lower, but not enough to justify the size of the valuation gap in my view. That’s a shame, because Brown-Forman remains a superb business.