AT&T (T) stock looks totally hated by the market. It still trades sub-$30 per share, not even 10% higher than its lows back in March. Indeed, it has significantly underperformed the wider market this year. The S&P 500 is now only down around 10% thus far in 2020 – not too bad, all things considered. Good old AT&T stock is down more than twice that amount.

Since I last covered the stock, we obviously have a tiny bit more information on how badly the current situation is hitting it. For instance, that post mentioned how WarnerMedia looked destined to take a chunky hit given the disappearance of live sport. The company’s 1Q20 numbers – released a couple of weeks ago – confirm that. Overall segmental revenue clocked in at $7,400m, down just over 12% versus 1Q19. Operating profit dropped by a quarter.

The Entertainment business unit, which houses its troubled pay-TV operations, also fared poorly. Revenue for the period came in at $10,500m, around 7% lower than at the same point last year. The company lost just over a million video subscribers in the quarter – not unexpected, but not good either. Operating profit clocked in at $1,300m, around 10% lower than this point last year. The company estimated that the pandemic cost it circa $600m in the first quarter all together.

Coronavirus aside, there is a wider issue at work here. Put simply, a lot of folks really don’t like management here. If you share that view, then focusing on debt reduction and dividends makes sense. I say that because I’m assuming you would not trust them to do anything else with your money! Regardless of that, my view for some time now has been that the stock is so cheap that this strategy can yield good long-term investment returns. Indeed, I have made the same argument countless times now for this ticker.

To pin some more numbers on all of this let’s just think about the debt load. In gross terms, it stood at circa $164,000m at the end of last quarter. It costs the company somewhere in the region of 4.4% to service it annually, as per its most recent 10-K. Here’s the thing. Normalized earnings power ordinarily clocks in at somewhere around the $25,000m per annum mark. Its current level of quarterly distributions – $0.52 per share at last payment – costs it $14,800m on an annual basis. That notionally leaves around $10,000m left over for other purposes. 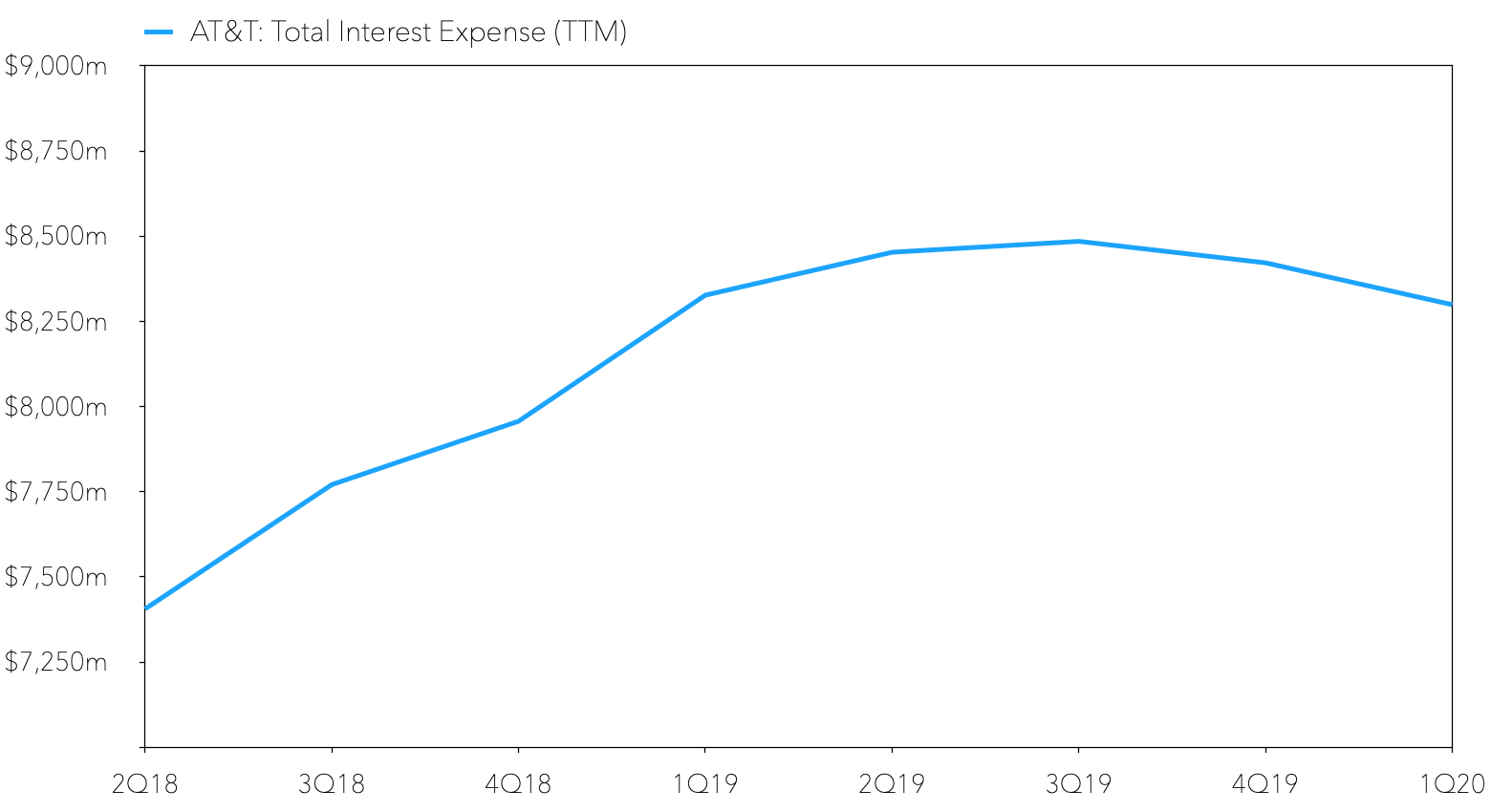 Imagine the company did nothing but spend the balance on debt reduction for the next five years. If it reduced its debt load by circa $50,000m, then it saves around $2,200m in recurring annual interest expense. That sum is then free to flow down to the pre-tax profit line. Assuming circa 20% tax, we are talking around $1,700m left over for shareholders. Call it 25¢ per share based on 7,125m shares outstanding.

In a nutshell, that sums up why I think AT&T stock is so cheap right now. If it does absolutely nothing except the above, then it reports around $3.75 per share in underlying net income five years from now. That requires it to hold its current underlying earnings power steady, though it actually means slipping quite a bit in inflation-adjusted terms. Or put another way, this scenario represents a pretty poor performance.

The stock currently trades at an EV/EBITDA ratio of circa 6.7. Imagine that valuation remains constant over the next five years. Because the company has $50,000m less debt under this scenario, its stock price would need to rise in order to maintain the same enterprise value. Quick math puts the value at around $36.20 per share, while the current share price is around $29.30. That works out to around 25% worth of share price appreciation. Not great, as I make that equivalent to just 4.4% per annum on a compound average basis. 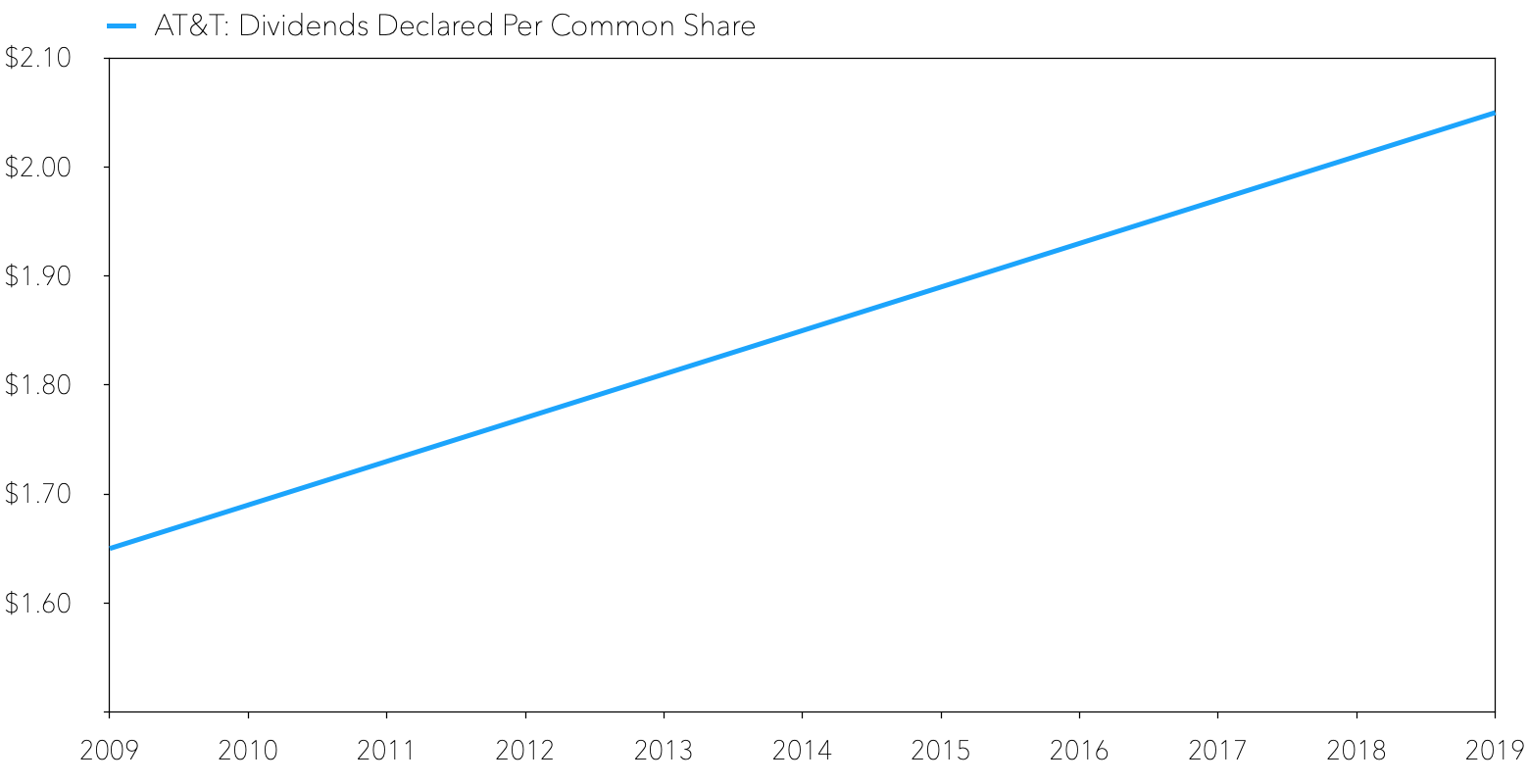 However, we also expect the company to carry on pumping out dividends to stockholders. Now, its annual dividend raise has worked out to exactly a penny per share per quarter for some time now. Let’s assume this carries on for the foreseeable future. I make that worth an extra $3,500m in total out to 2025, which the company covers via its cumulative saved interest expense. If you bought the stock right now, then cumulative dividend cash over the next five years would amount to around $11 per share on that basis.

If we add that cash pile to our future share price, then we end up north of $47 per share. Some more quick math puts that as equivalent to 10% annual returns from today’s stock price. Note, this does not even include the effect of reinvested dividends.

Granted, this is all hypothetical, but I think it demonstrates how cheap the stock is right now. It assumes the lowest returning endeavor – debt reduction, with zero profit growth except via saved interest expense. It says nothing about stock buybacks (i.e. the company’s actual capital allocation plan), and only assumes earnings power remains stable in nominal terms. All-in-all, I still think the stock represents a good value pick below $30.

Amazing piece! How do you calculate “normalized earnings power”?

Thanks! It’s not much of a calculation: just a rough, sustainable level of underlying net profit. It’s around $25B without COVID-19 here.

Thank you for the answer!

Can you explain how you came to this number of sustainable net profit? I mean, after reading your article i went to google to learn how to calculate that and…wow, this is really complex to do.

I’m thinking if i using median operating profit (EBIT) for the last 10 years will do the job.

Why not use adjusted earnings, as reported by the company?