There are a handful of stocks I follow that are almost impossible to justify in terms of valuation. Think York Water Company for instance – a regional utility stock that has the distinction of racking up over two hundred years of consecutive dividend payments. It trades for 45x net earnings! Another company that looks like it qualifies for that basket is well known hamburger chain Wendy’s (WEN).

Ever wondered why so many celebrity sports stars and pop singers wind up buying Burger King franchises? Three reasons. First, the business is simple to understand. Second, you get guaranteed customers. Third, the ‘buy what you know’ mantra has an intrinsic appeal to it. If you’re somebody who spends twenty dollars at Wendy’s every month then there’s a natural attraction to the idea of buying yourself a tiny slice of the business.

That said I can’t fathom paying the current price to own Wendy’s stock. I mean right now the company has a total market capitalization of just over $5,000m. As far as I can see the underlying profit engine pumps out somewhere in the region of $145m after-tax. To buy shares of Wendy’s stock you must be willing to part with around thirty-five dollars for every dollar of net profit it earns. That just looks way too high to me.

So, what’s going on here? In a word, buybacks. I have the cumulative total spent on stock buybacks at around $2,000m since the start of 2014. On top of that, Wendy’s has shipped off an additional $430m in the form of cash dividends over the same timeframe. 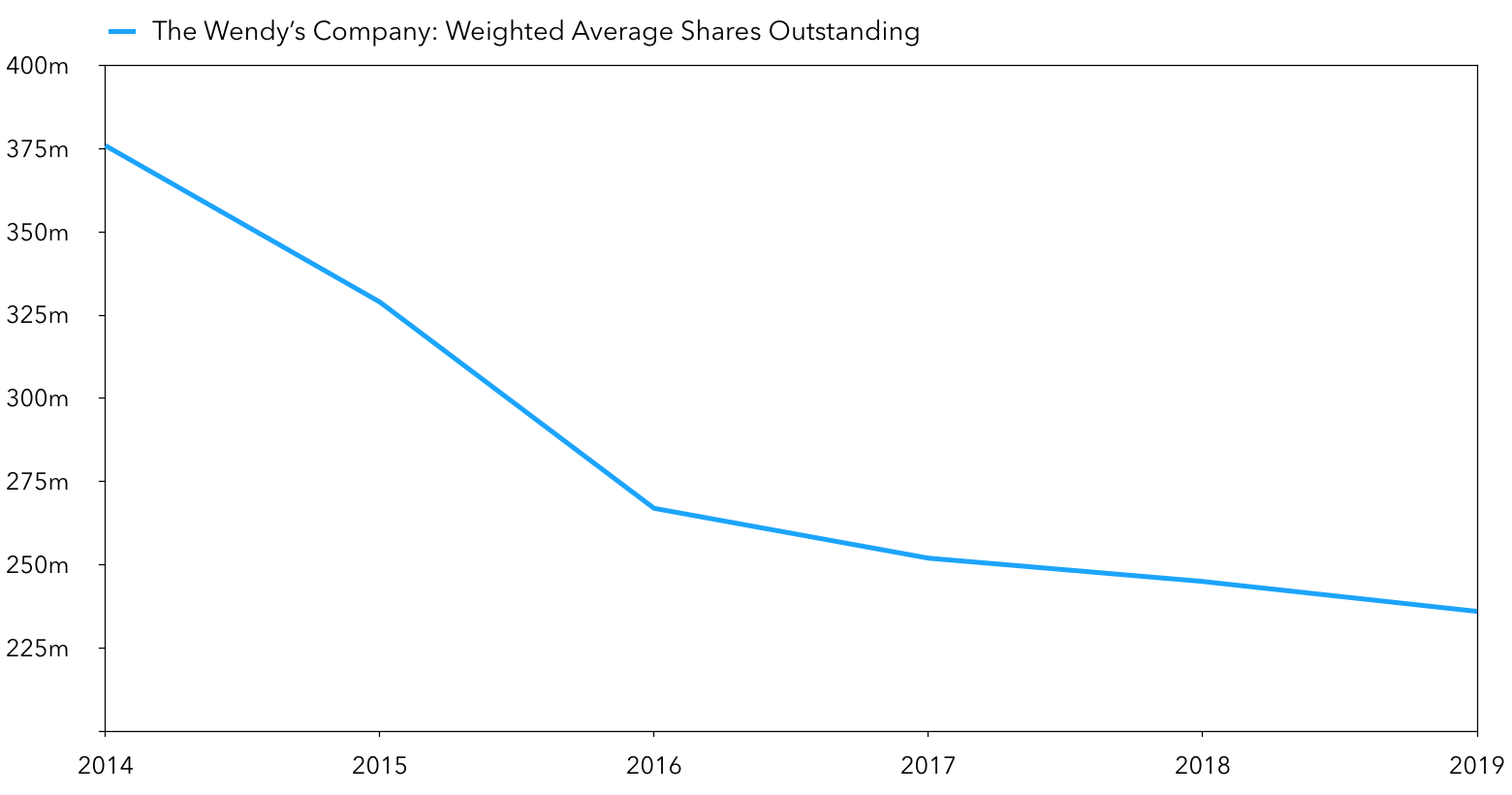 How the heck can a company that makes around $145m in profit each year afford that, I hear you ask. Good question, because since the start of 2014 Wendy’s has only generated circa $350m worth of cumulative free cash flow (it will generate more going forward after transferring many of its company operated stores to franchisees). The bulk of the shortfall has come from debt. To put a precise figure to that statement, Wendy’s has taken on around $1,000m in additional net financial debt since the end of 2013. It also received $450m in 2018 from the sale of its investment in Inspire Brands (owner of Arby’s and Buffalo Wild Wings among others).

Now, the net effect of this capital return program has been crazy. Six years ago there were 366,161,754 shares of Wendy’s common stock outstanding. Right now, the figure is somewhere in the region of 235,000,000. Back of the envelope math puts the compound average share count reduction at circa 7% per year, which has clearly been a great boost to Wendy’s per-share profit growth figures.

This is where it gets tricky for current and prospective Wendy’s stockholders. At the risk of stating the obvious, a valuation of 35x profit is going to require a high rate of earnings-per-share growth to justify. On that front Wendy’s management sees the company growing the current $10,000m in annual systemwide sales (i.e. the sum of all the dollars spent on burgers, fries, and so on in all of Wendy’s 6,750 establishments) by around 5% per annum. Management sees that driving profit growth in the high single-digit per annum region. 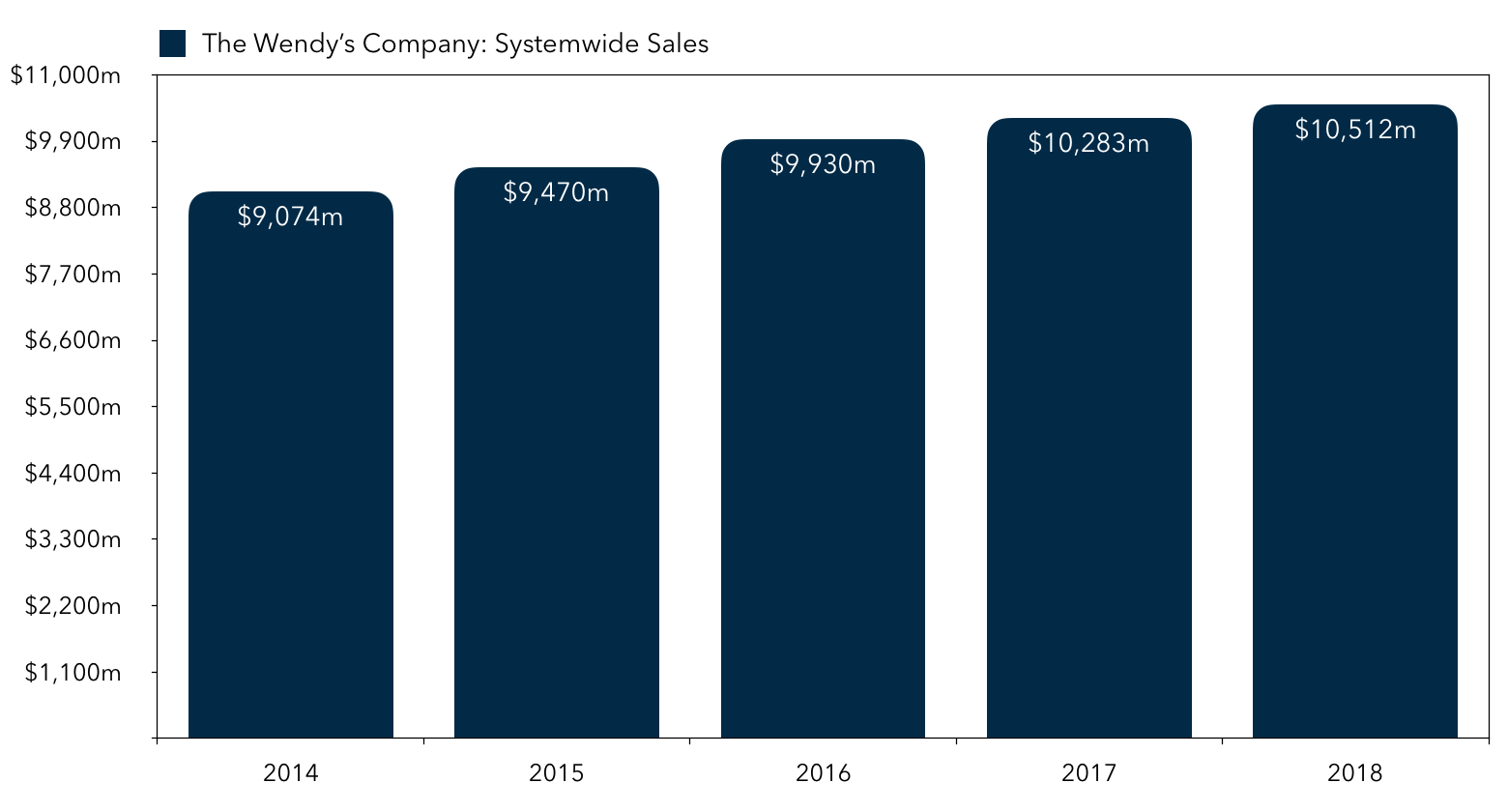 At 35x earnings I don’t think that makes sense for three reasons. Firstly, take a look at that relative to McDonald’s – the crème de la crème of restaurant stocks. Right now, management over at McDonald’s have pretty much the exact same long-term growth target as Wendy’s. The stock trades at around 27x earnings – a big discount to where Wendy’s shares are at right now. On that basis, I’m not sure why anybody would plump for the latter over the former.

The second reason is debt. Put simply, Wendy’s carries a lot of it relative to its profit generation. The cash dividend takes up around $90m per year based on roughly 235m shares outstanding and a 10¢ per share quarterly dividend. I estimate that leaves Wendy’s somewhere in the region of $60m each year in surplus cash. It carries around 30x that figure – around $1,800m – in net financial debt on its balance sheet. (Furthermore, the roughly $7.50 per share in net debt makes the $22 share price even more expensive relative to net profit).

The final reason is just straightforward math. A high single-digit earnings growth rate, plus the current 2% dividend yield, implies long-term returns of around 10% per annum. Obviously that assumes the 35x annual profit tag holds up. Anybody buying Wendy’s stock right now has to be comfortable making that bet, because even a move back down to the 25x profit range would prove a significant headwind to shareholder returns.

Disclosure: I do not currently own shares of Wendy’s stock.

Citigroup Stock Over The Next Decade

Wells Fargo Stock In A 2008 Scenario