The founder of the ‘Dogs of the Dow’ value investing strategy posited that the reason the strategy works is because stodgy blue chips have more room to navigate their issues compared to smaller peers. In the meantime, you typically get to pick up a higher than usual dividend yield as the shares cratered. Eventually, many of these businesses go on to recover and you end up generating solid shareholder returns.

I mention all this as it pretty much typifies where I think we are at with Wells Fargo (WFC) stock right now. (Granted, Wells is not in the Dow Jones Industrial Average but with a $200 billion market-cap it is pretty big). Now, as far as I can see the San Francisco based bank faces three issues right now; two self-inflicted, the third not so much.

The first is an account fraud scandal which has dragged on for a while now. Essentially bank employees were opening fictitious accounts without customers’ knowledge, thereby giving the appearance of increased cross-selling of financial products and thereby boosting their own sales figures. Unfortunately these kinds of corporate culture scandals seem to typify large bank stocks and pop up periodically.

Anyway, this has so far cost the bank a few billion dollars in legal fees and fines, not to mention the former CEO’s resignation. Indeed total litigation costs of $1,500m in 4Q19 helped drag quarterly earnings down to the $2,800m mark (circa 60¢ per share). Not good.

The second issue concerns its balance sheet. Right now the bank has total assets of around $1,900,000m recorded on it. No, that’s not a typo – Wells Fargo has $1.9 trillion in assets. Why exactly is this an issue? Well, at the moment Wells has to operate under a Federal Reserve imposed asset cap of $2 trillion until the bank has satisfied regulators’ concerns regarding compliance. 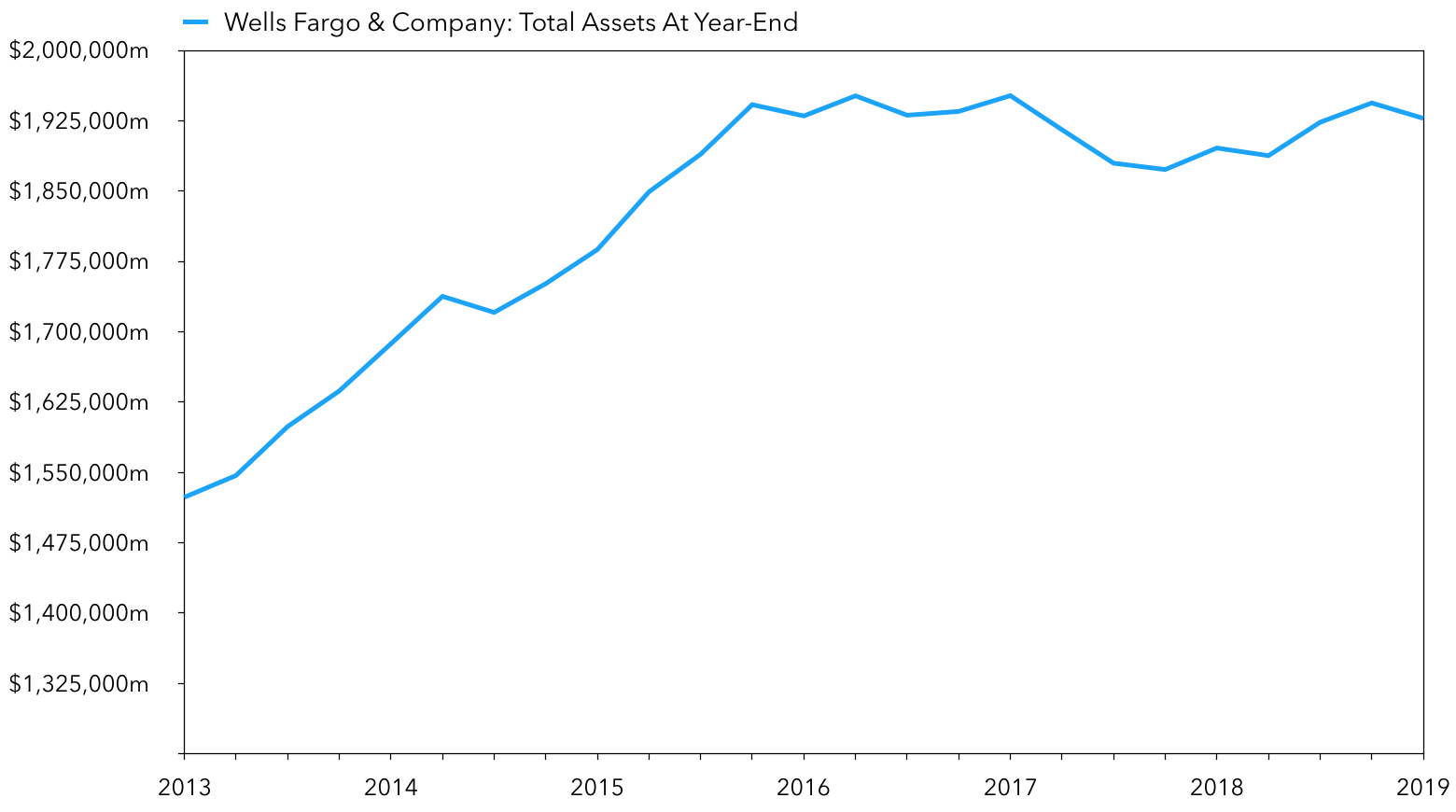 Now, in order to grow organically you’d ordinarily expect a bank to grow its assets (e.g. by writing new loans). For the time being Wells can’t do this due to its past bad behavior. Nobody tells Colgate-Palmolive that it can’t sell more toothpaste each year, despite its massive 40% market share. Nobody tells Coca-Cola that it can’t sell more syrup to bottlers, despite ultimately being responsible for 3% of all beverages consumed globally each day. But big banks? Yes, they can periodically have their wings clipped owing to their somewhat unique role in the economy. Even so this issue will be solved sooner rather than later.

The third issue concerns interest rates. Last year the Federal Reserve cut interest rates three times in total, bringing the benchmark rate down to around 1.75%. As you’d expect, that had the knock on effect of lowering the interest income that banks like Wells Fargo generated from their assets.

The good news is twofold as far as I can see. Firstly, none of these issues look insurmountable. In fact, Wells still posted net profit of around $18,000m last year for the holders of its common stock (despite the above issues). Granted, that’s down a bit from the $23,000m it was making a few years back, but the bank is still an absolute profit spinner.

That brings us nicely onto the second point: Wells Fargo stock is cheap. By my count, that $18,000m in annual net profit is worth just over $4 per share. Wells Fargo shares change hands for around $48.50 per share at time of writing. Or put another way, and despite the issues affecting the bank’s profit, you can buy it for just 12x annual profit. 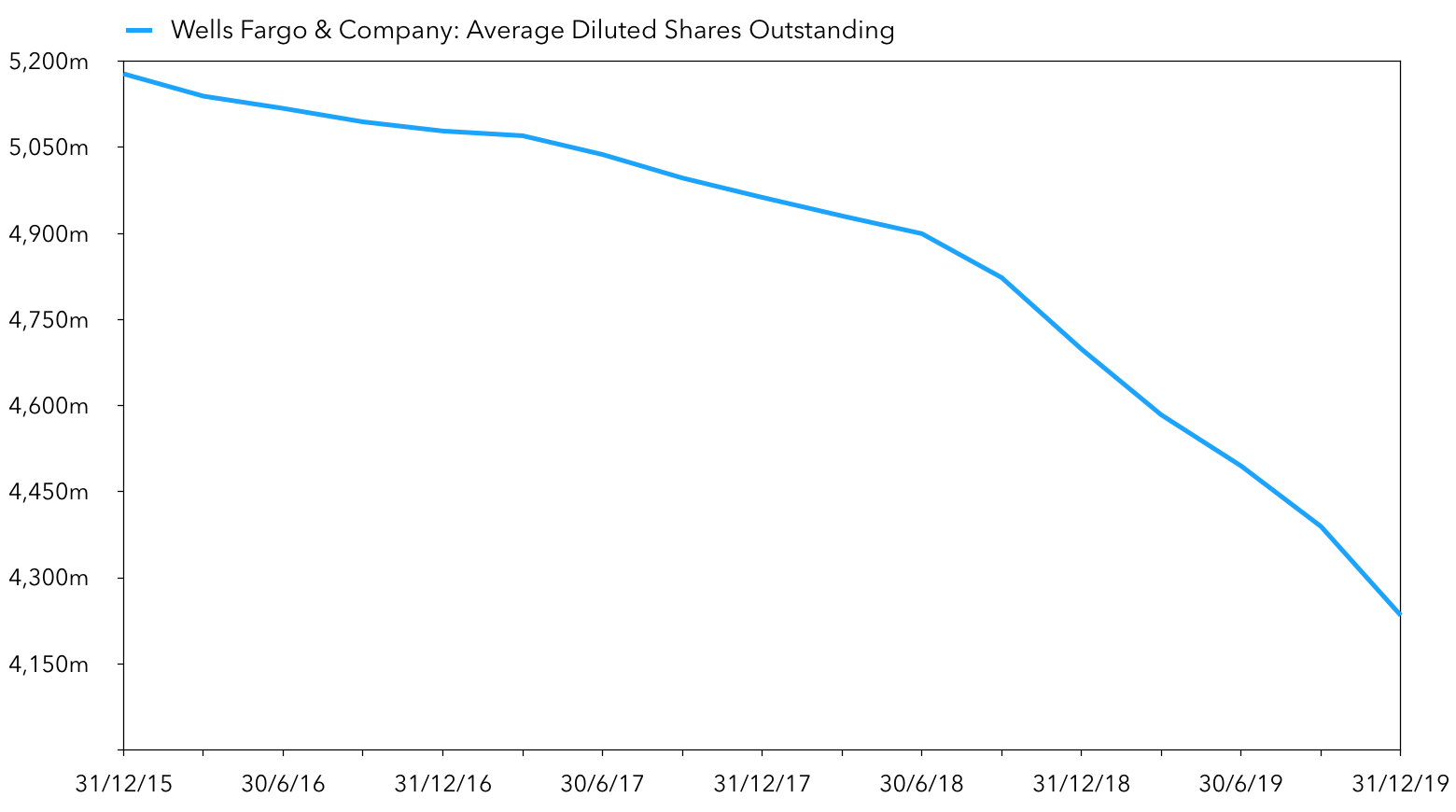 That strikes me as a good deal for long-term investors. At some point the underlying profit machine will ratchet up simply as a result of cost cutting. A natural reduction in legal fees will do much of the work on that front. When it does, you’ll be looking at a bank pumping out over $20,000m in recurring annual net profit. At the moment, Wells pays out less than half of that by way of cash dividends. Even so, that is enough for a 4% dividend yield based on the current stock price. Heck even the anti-dilutive effect of stock buybacks could propel significant shareholder returns from these levels. I note that Wells reduced its share count by around 10% last year.

Speaking to CNBC back in 2Q18, Warren Buffett reckoned Wells Fargo would outperform most of its competitors when viewed over the period of a decade. Okay, he would say that given Berkshire owns a big slug of Wells stock. However based on the above I find it hard to disagree with that statement.

Citigroup: The Next Decade