There is a great chapter in Of Permanent Value: The Story Of Warren Buffett that touches on his experience with McDonald’s (MCD). I don’t want to lift too much from the book, though suffice to say it is a wonderful little story that starts out with Buffett, Bill Gates and a McDonald’s outlet in Hong Kong of all places.

This slightly surreal encounter occurred in late-1995, and by the end of the following year Buffett’s Berkshire Hathaway owned just over thirty million shares of McDonald’s stock. There was a two-for-one stock split a few years after that, so we’re actually talking more like sixty million shares in today’s terms. In any case it doesn’t matter much because by the end of 1998 the position had largely been sold off.

I find it interesting that Buffett chose to dispose of his McDonald’s stock so quickly. In some respects I guess it made sense. I mean look what happened to the stock’s price-to-earnings ratio between 1995 and 1998. At the end ’95 it was 23.25, and by the end of ’98 it had ballooned to somewhere in the region of 35x earnings. I guess that ‘free lunch’ was just too tempting to ignore.

Anyway, contrast that attitude with Buffett’s long-term position in Coca-Cola common stock (which also went through a similar phase of huge valuation multiple expansion in the late 1990s). Granted, there were probably very significant tax implications driving these decisions, but it is still interesting given that McDonald’s is a very ‘Coke like’ company in a lot of respects. 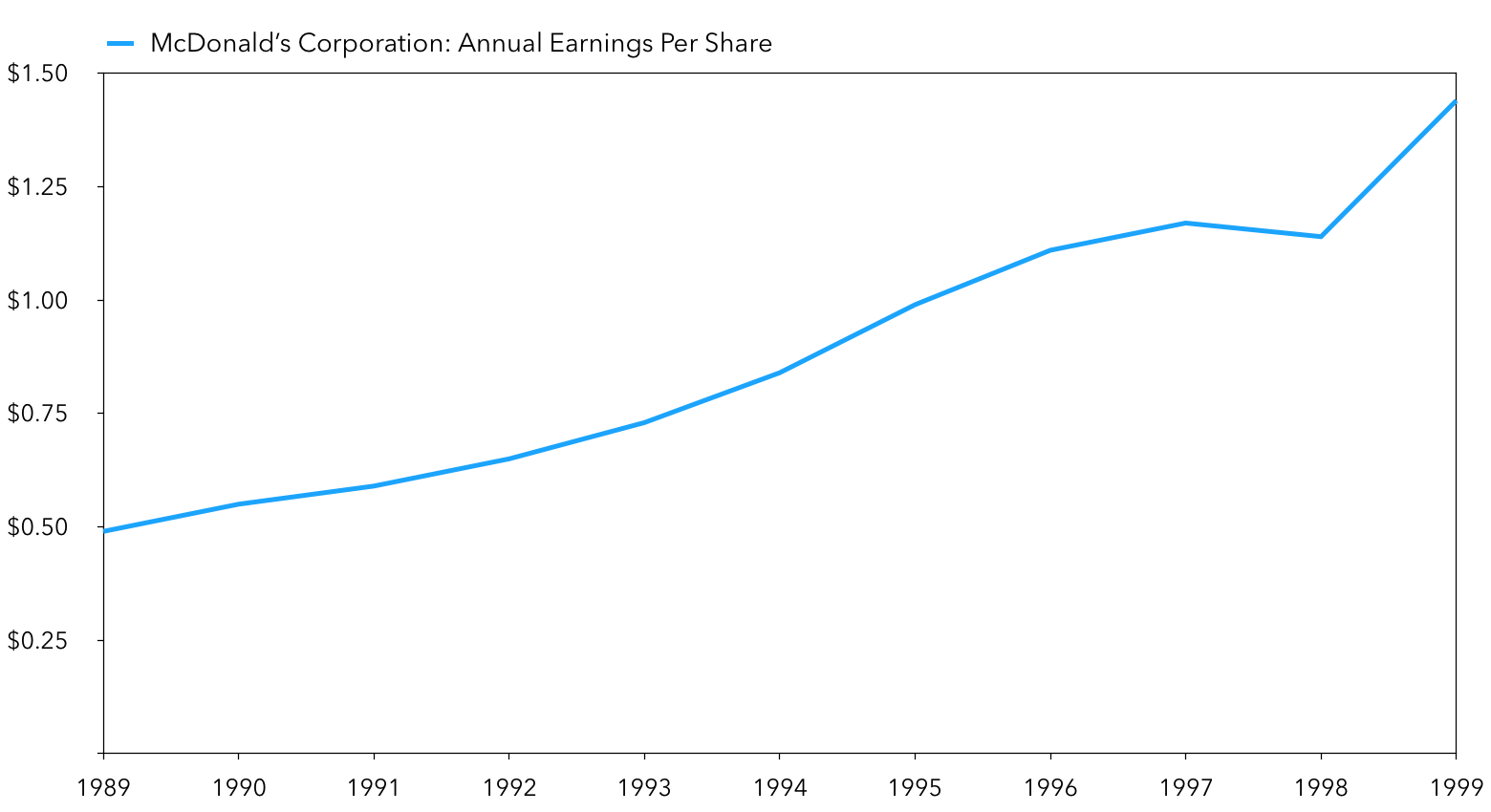 In any case let’s take a look at the opportunity cost of that decision. McDonald’s has posted average annual earnings-per-share growth of around 9.5% between 1995 and 2018, and share price appreciation has averaged around the same rate. In terms of total returns, the headline number works out to around 10% per annum. That figures assumes the cash dividends just piled up someplace and didn’t do anything.

The dividend yield on cost data is pretty cool as well. Let’s say you bought stock at the end of ’95 when the prevailing share price was around $22.50. The current trailing-twelve-month dividend is $3.90 per share, so we would be looking at a yield on cost of 17%. Those sixty million shares would be throwing off around $225m per annum in annual dividend cash for Berkshire. Not too shabby!

Now, in the mid-90s the average cost of Berkshire’s McDonald’s position was around twenty-two bucks per share. Call that $1,300m worth of stock based on sixty million split-adjusted shares. What would that be worth today? The answer is around $9,500m based on the current $157 share price.

Two things are really cool about that. The first is the sheer scale of real-terms wealth creation. Every dollar invested in McDonald’s stock at the end of 1995 is now worth well over four dollars after inflation. The second is that this entirely ignores the huge pile of dividend cash pumped out in the intervening period. In per-share terms McDonald’s has paid out around $36 in that time, more than enough to cover the original investment. 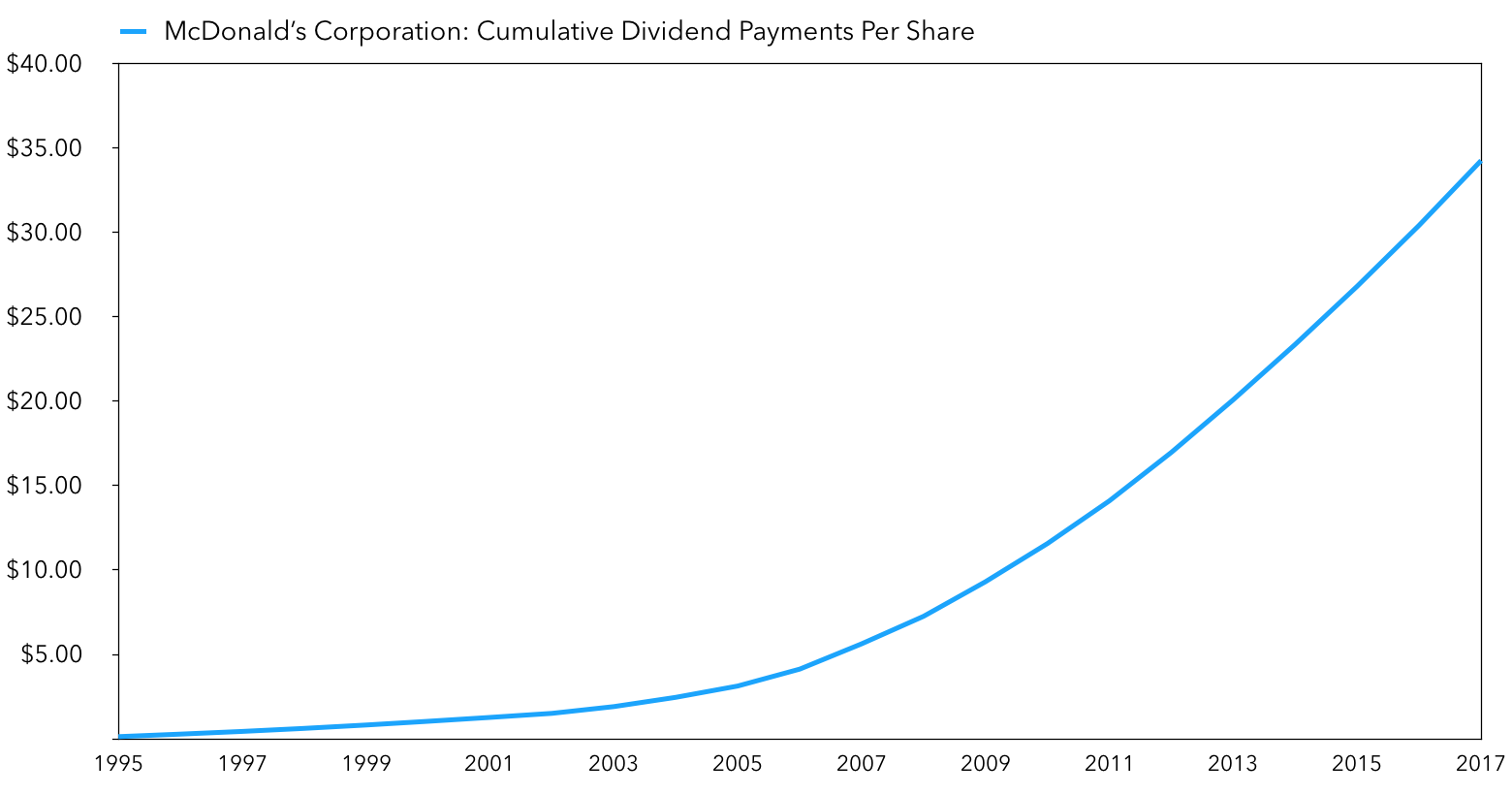 Funnily enough Berkshire stock has performed just about the same. Between year-end 1995 and today it has returned somewhere in the region of 10.25% per annum. Perhaps it would have been easier if it just held McDonald’s stock all the way through!

The Story Of Agnes Plumb