I recently came across a funny little Warren Buffett quote from Berkshire’s 1991 annual report. It relates to the acquisition of Coca-Cola (KO) stock a few years prior: “In 1989 when I – a happy consumer of five cans of Cherry Coke daily – announced our purchase of $1 billion worth of Coca-Cola stock, I described the move as a rather extreme example of putting our money where my mouth was.”

Let’s leave aside the strong degree of product loyalty that leads somebody to consuming 1,825 cans of Cherry Coke per annum! In his mind, one of the great advantages that Coke had was that it earned a lot of its money abroad. There was plenty of scope for the company to increase the per-capita consumption of its products overseas, just as it had done in the United States for decades.

Buffett clearly felt that the above was not adequately reflected in Coca-Cola’s valuation at the time. The Atlanta-based giant traded for around 16x its prior-year income when Berkshire completed its first $1,000m investment in early-1989. It kind of goes without saying, but he was proved right in the years that followed.

I mean, just think about Coca-Cola back in the late-1980s for a moment. It had spent the decade compounding away at circa 12% per annum on average. The underlying earnings quality was exceptionally strong, with net profit margins consistently in the 10% area. Oh, and the firm also had a consistent track record of capital light operations. That meant plenty of surplus cash generation each year.

Now, the company retired 11% of its total shares outstanding between 1983 and 1988. In addition, it had continued its traditional policy of steadily increasing annual payouts. Coca-Cola raised its dividend by an average of around 9.4% per annum between 1970 and 1988. Its annual distribution started the 1970s at around $0.24 per share, growing to $1.20 by 1988. (Figures adjusted for stock splits up to and including the 3-for-1 split in 1986). 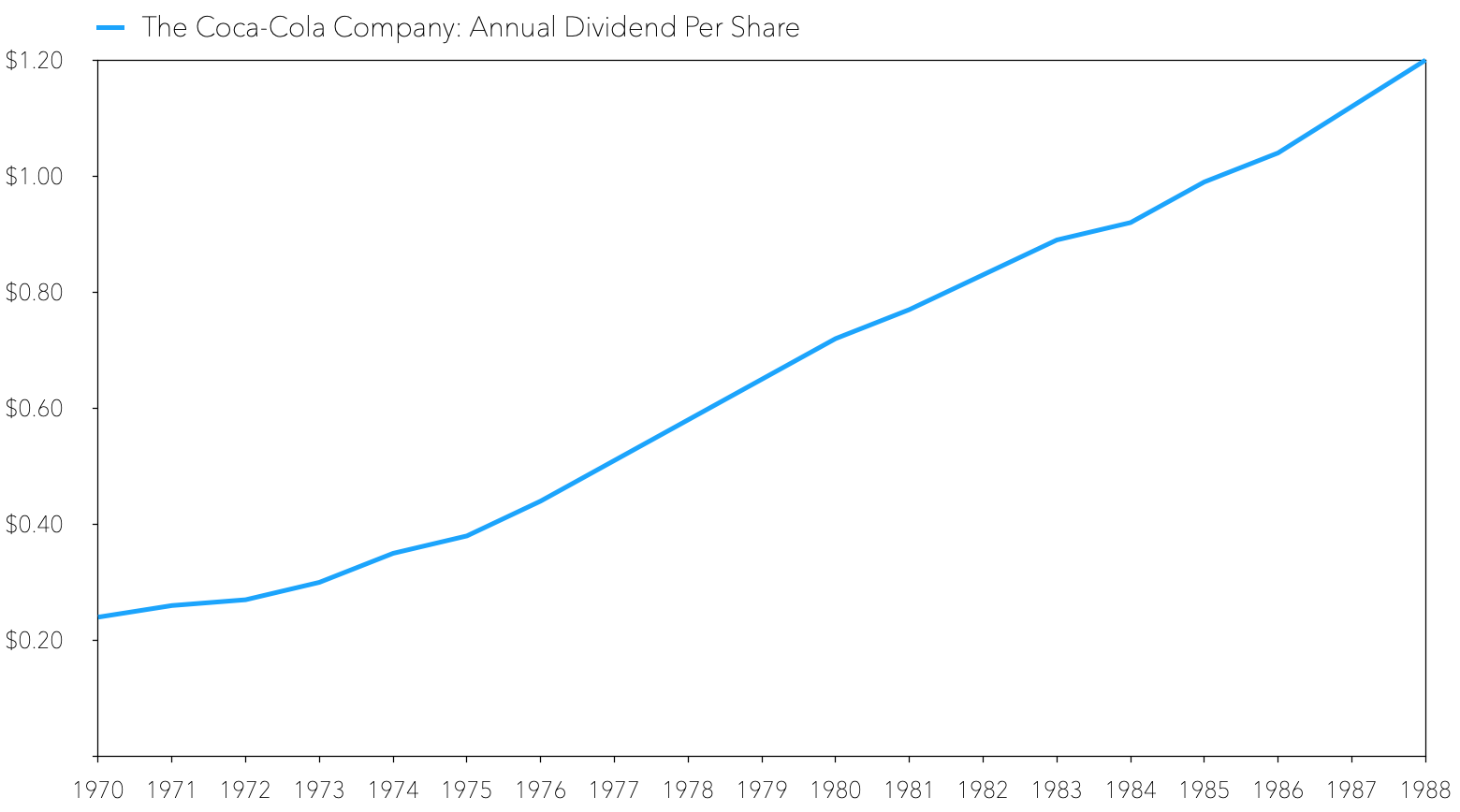 That set the scene for a compelling long-term investment case, and it was one which saw Coca-Cola make up about one-third of Berkshire’s common stock holding at the time. Hindsight is a wonderful thing: it looks obvious to anyone reading Buffett’s thoughts from back then that this was a no-brainer.

I mean, what’s not to like? You get a great company with a mega-brand and good growth prospects. You get a capital light operation which is inherently cash generative. Oh, and a large portion of that cash goes directly into shareholders’ pockets. The company had even dumped Colombia Pictures to focus on the core drinks business.

The final piece of the equation: you got it all at a fair price too. All the figures above were known to investors at the time. Copies of annual reports that set out Coke’s per-capita and nominal volume increases each year were also freely available. Pour over those reports and shareholder letters from the 1970s and 1980s and you’ll see the same hallmarks that you would expect to see in a report today. For example, here’s the opening paragraph from the 1988 annual report:

The Coca-Cola Company’s two unique and invaluable assets – our trademarks and our worldwide system – make us the world’s only truly global soft drink’s company. In 1988, more than 200 billion servings of our soft drinks were sold worldwide. No other company sold even half as much.

There are probably many ordinary investors out there who did what Buffett did. Granted, not with 6% of Coke stock and a billion bucks! But putting a good chunk of cash to work, knowing that that their investment would be worth significantly more in two or three decades’ time. 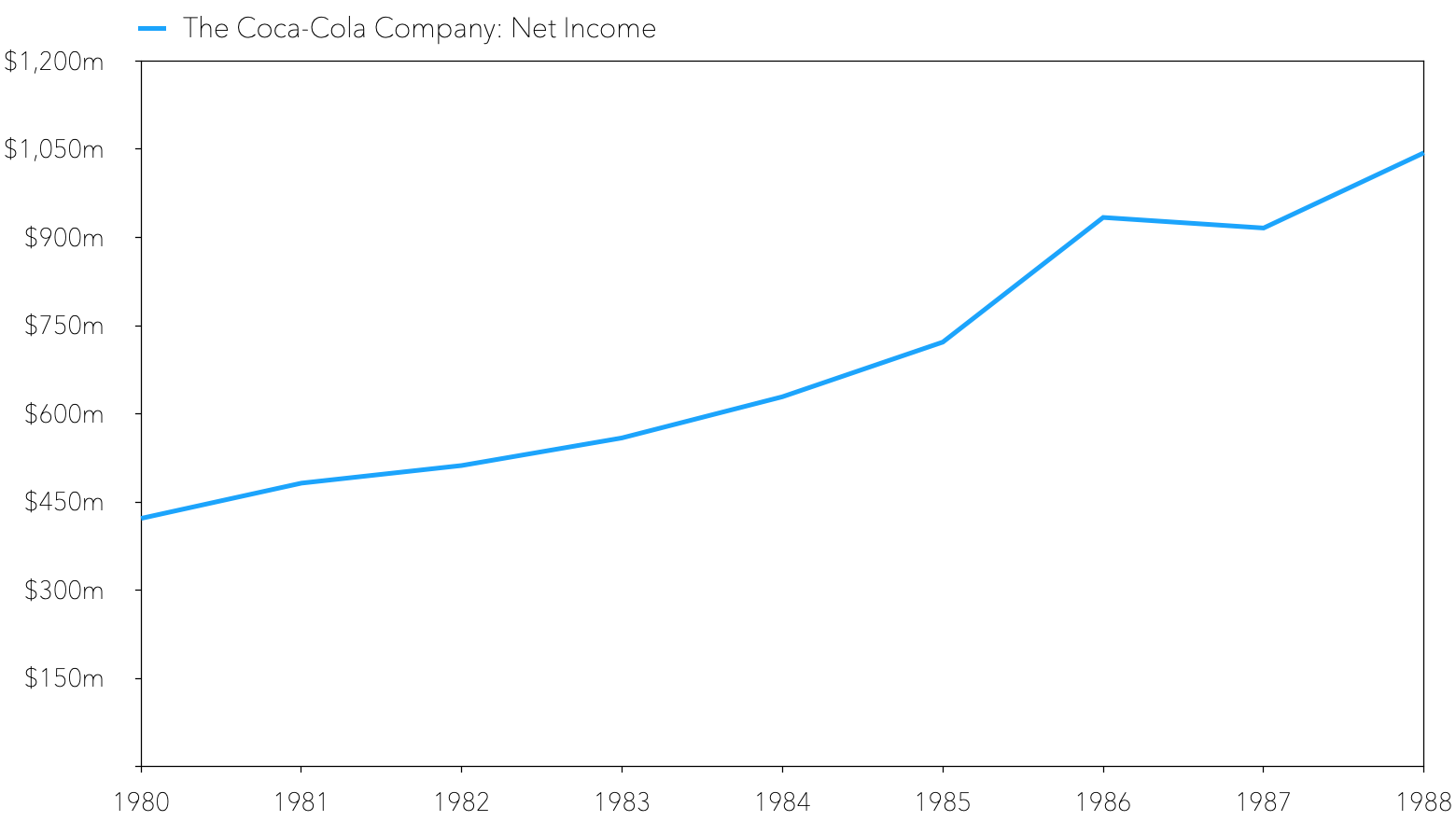 As for that initial purchase by Berkshire, what is it worth today? Well, let’s start with the stats for a simple $1,000 investment. First and foremost, the firm has paid out about $5,250 to stockholders in dividend cash since then. The associated yield on cost would be around 50% today.

In addition, every $1,000 invested in Coca-Cola stock back then would be worth around $15,500 today. I make that equivalent to a total return of 11.90% per annum, and over a nearly thirty-year stretch to boot. Oh, and that’s not including the effect of reinvesting those dividends into more shares. In any case, it represents a remarkable performance for a fairly un-remarkable investment in the world’s largest soft drink’s company.