Warren Buffett’s early involvement with Disney (DIS) is probably one of investing’s greatest ‘what could have been’ stories. Back in the mid-1960s Disney was worth roughly $85 million with a pristine balance sheet sporting a net cash position. It had recently released Mary Poppins, which netted it $31 million in North American rentals off a $4 million budget. The company had also generated pre-tax income of around $21 million in the previous year. Disney would use the profit to help fund the purchase and construction of Walt Disney World in Florida, and had also sunk around $17 million into its new ride at Disneyland, California: Pirates Of The Caribbean.

Spotting this potential bargain, the young Buffett flew out to California to meet with the head honcho himself, Walt Disney. At 5x the cost of the ride (not to mention the legacy film library), and 4x pre-tax income, Buffett bought roughly 5% of the company for $4 million. The company was undoubtedly cheap, but profits were probably lumpier back then compared to today. The next year he sold the stake for $6 million, netting him what must have seemed a nice 50% profit.

Hindsight is a wonderful thing. Even without much investigation it is clear that had Buffett held on to Disney stock for fifty years he would have made an absolute fortune. How much exactly? Well, accounts differ depending on the source and how they calculate it. If you type the story into a search engine you will find that most results give you a figure based on a constant 5% ownership.

My calculation differs slightly and is based on information from the man himself. In his 1995 letter to Berkshire Hathaway shareholders Buffett recounted the story of his first Disney investment in 1966. (Note: Berkshire acquired Disney stock for a second time in 1996 after Disney acquired Capital Cities in a stock/cash deal). In that letter, Buffett mentions paying 31¢ per split-adjusted share for Disney stock and selling for 48¢ per share a year later.

Now, as far as I can see Disney has split its shares once more since then – that was a 3-for-1 split back in 1998. On that basis, the young Buffett paid just 10¢ per split-adjusted Disney share back in 1966. On a $4 million outlay that would have netted him around 40 million shares (split-adjusted). Disney stock changes hands at about the $150 per share mark as I type. Back of the envelope math therefore suggests that Buffett’s stake would currently be worth in the region of $6 billion had he held on. 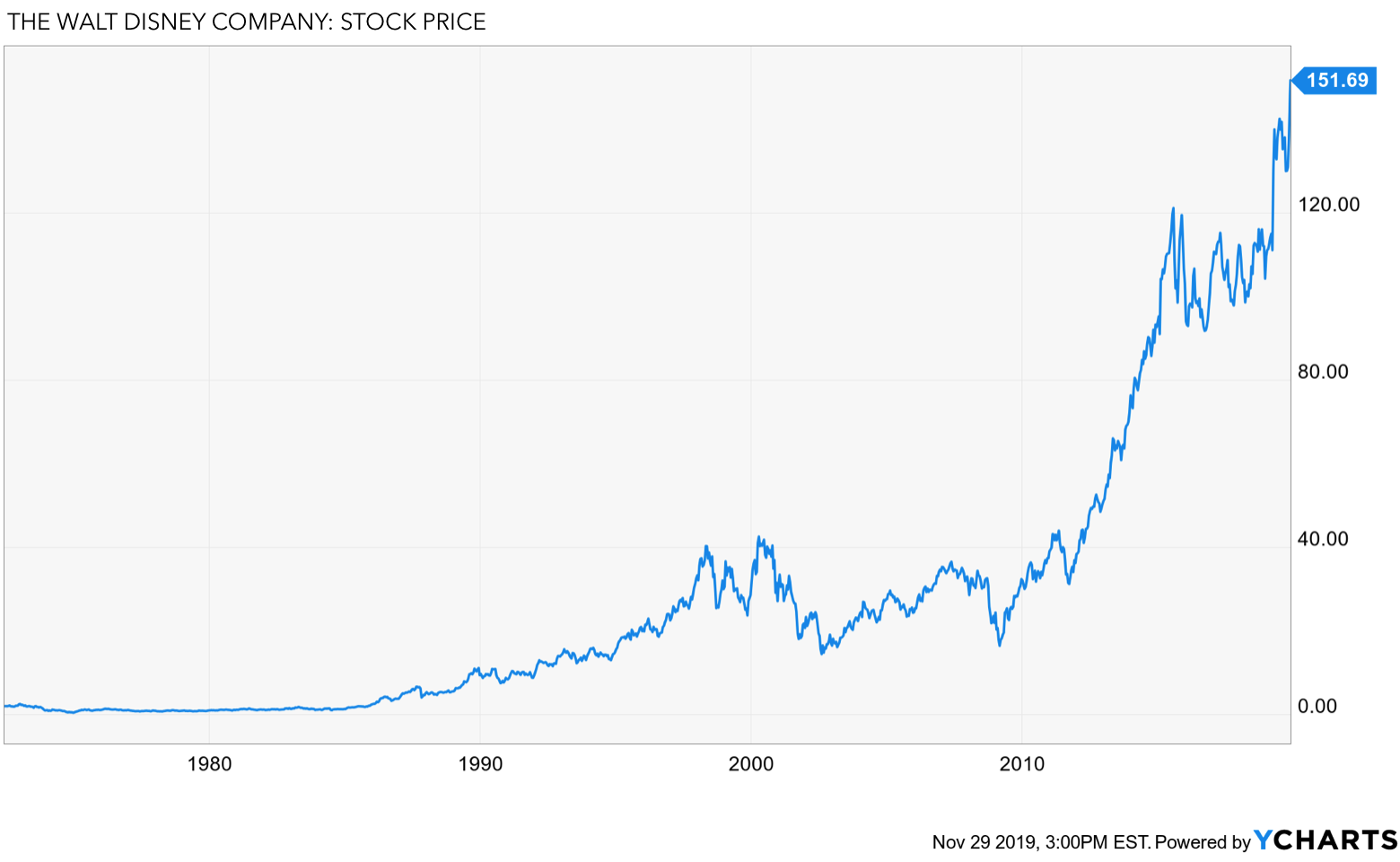 Bear in mind this is still a very simplistic analysis. Most obviously it ignores all the dividend cash paid out by Disney in the intervening period. That adds up to a lot, and even more if you assume it would have been reinvested somewhere. I don’t have company sourced data for a complete dividend history, but I do have third-party data going back to 1966. Taking that at face value suggests $13 per split-adjusted share paid out by Disney in dividend cash. Back of the envelope math puts that at circa $500 million on the basis of 40 million split-adjusted shares.

So, in the simplest terms I make Buffett’s Disney position worth at least $6.5 billion had he held since 1966. In reality it would likely be worth much more for two reasons. First, I just assumed the cash dividends piled up in a checking account earning 0% interest. Unlikely. This being Buffett I imagine that cash would have compounded away in other productive investments. Second, Disney has spun off a couple of businesses over the years that I have ignored for simplicity. (Note: A great example of how this can enrich long-term investors would be the history of Altria/Philip Morris).

There is one more piece to the puzzle: inflation. Needless to say $4 million in 1966 was worth a heck of a lot more than $4 million is today. To be a bit more precise I make every dollar in 1966 as being worth just under eight dollars in 2019. On that basis, let’s call Buffett’s $4 million outlay in 1966 as being worth the equivalent of roughly $32 million in today’s currency. Crunch the numbers on that and I make Disney returns since 1966 as being around 10.5% per annum at an absolute minimum after inflation. (Note: due to the conservative assumptions made in my methodology the ‘real life’ figure would be even higher).

Finally, the secret behind those incredible returns? Disney’s earnings growth has been unbelievably impressive for an incredibly long period of time. According to the company’s 1999 annual report it grew earnings by 16% per year on average between 1945 and 1999. (Note: Disney only IPO’d in 1957 – and even then it traded over the counter – so it is unlikely that anyone could capture the entirety of this performance).

Since 1999 I have earnings per share growth at around 11.5% per annum on average. Or put another way, Disney has been a double-digit compounder for nearly seventy-five years! Could anybody have foreseen that in the late 1950s and throughout the 1960s? It would be naive to assume so. I can only hope that the next seven decades prove just as fruitful!