As much as I’d like to talk about blue chips stocks, it isn’t easy right now. None of the go-to names, save a few exceptions such as Exxon Mobil, trade for particularly attractive prices at the moment. Perhaps we will still revisit the lows of last month, or maybe that was it. Either way, it is hard to get too excited with the likes of Coca-Cola, Colgate Palmolive, Procter & Gamble and so on at current stock prices. Heck, even McDonald’s trades in excess of 20x last year’s earnings. It maintains that valuation despite the monumental disruption to its systemwide sales figures.

On that note let’s talk about Visa (V) stock. The last time I covered Visa was back toward the end of 2018. Its shares changed hands for around $140 apiece, and expectations at the time pointed to FY19 net profit in the $5.30 per share region. I made the case that the circa 26.5x forward earnings tag represented pretty good value, even though it looked expensive. Sixteen months on, not much has changed. Okay, much has changed, but not to the mid-to-long-term investment case here.

Unsurprisingly, much of what I recently wrote about Mastercard applies to Visa. For the most part these two will be like peas in a pod. On that note let’s stick with the similarities. Firstly, its profitability. Visa is a money making machine that requires very little by way of capital spending. As a consequence, it lavishes its stockholders with cash. The cumulative total spent on stocks buybacks alone stands at over $45,000m since 2010. 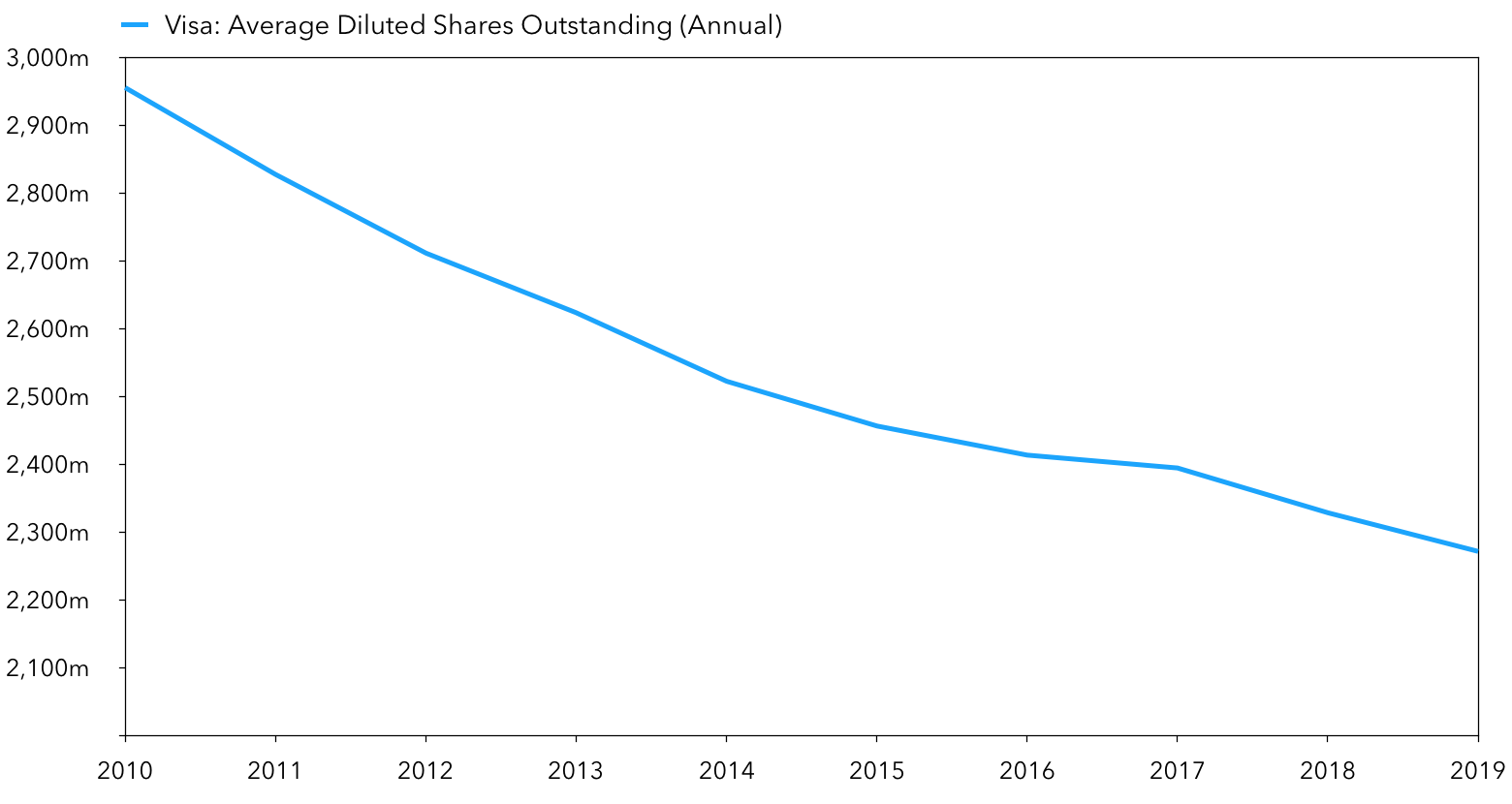 On that note, we get to the second similarity: a strong balance sheet. Despite spending huge sums on shareholder returns, Visa carried just $16,700m in debt at the end of last year. Net of $8,800m worth of cash, plus a further $3,900m in short-term investments, the figure stands at just $4,000m. To put that figure into some context, it represents less than six months’ worth of retained profit. Or put another way, Visa could eliminate its entire net debt position in under six months even after meeting its dividend obligation to shareholders.

That statement is obviously based on last year’s profit situation. As bad as COVID-19 may be for the economy, it will not hurt Visa all that much in my view. To understand why, just consider the nature of its business. For use of its network to facilitate transactions between your bank and the merchant’s bank, Visa takes a tiny cut. That means its revenue stream is linked to the total volume of payments that it handles.

In practical terms that also means Visa will still make a huge amount of underlying profit this year. For instance, the company reported total payments volume of circa $8,800,000m last year. The comparable figure came in at $7,400,000m two years earlier. Visa made over $8,800m in net profit that year, while its current dividend obligation is just 30% of that figure. Or put another way, the business will generate huge amounts of retained profit even if payments volume drops significantly due to a horrid economy. If we do revisit the lows of last month, I’d go crazy with the stock buybacks if I was management.

The third and final similarity: double-digit annual growth. The payment processors have been one heck of a growth story. Back in the mid-1990s, Visa registered around 500m cards and payments volume of circa $600,000m. Last year, the comparable figures came in at 3,400m and $8,800,000m respectively. Heck, Visa now registers around 1,000m cards in North America alone. What’s more, it still has years of that secular tailwind left to run.

Visa stock trades at an earnings yield of circa 3.15% based on FY19 profit. It pays less than a quarter of that figure out by way of cash dividends, for a current dividend yield of 0.70%. It plans to return the excess via stock buybacks, and we can reasonably expect the underlying income stream to grow at a double-digit annual clip for many years to come. Bear that in mind when folks complain about Visa being expensively valued. It is arguably much better value than many traditional blue chip stocks right now. 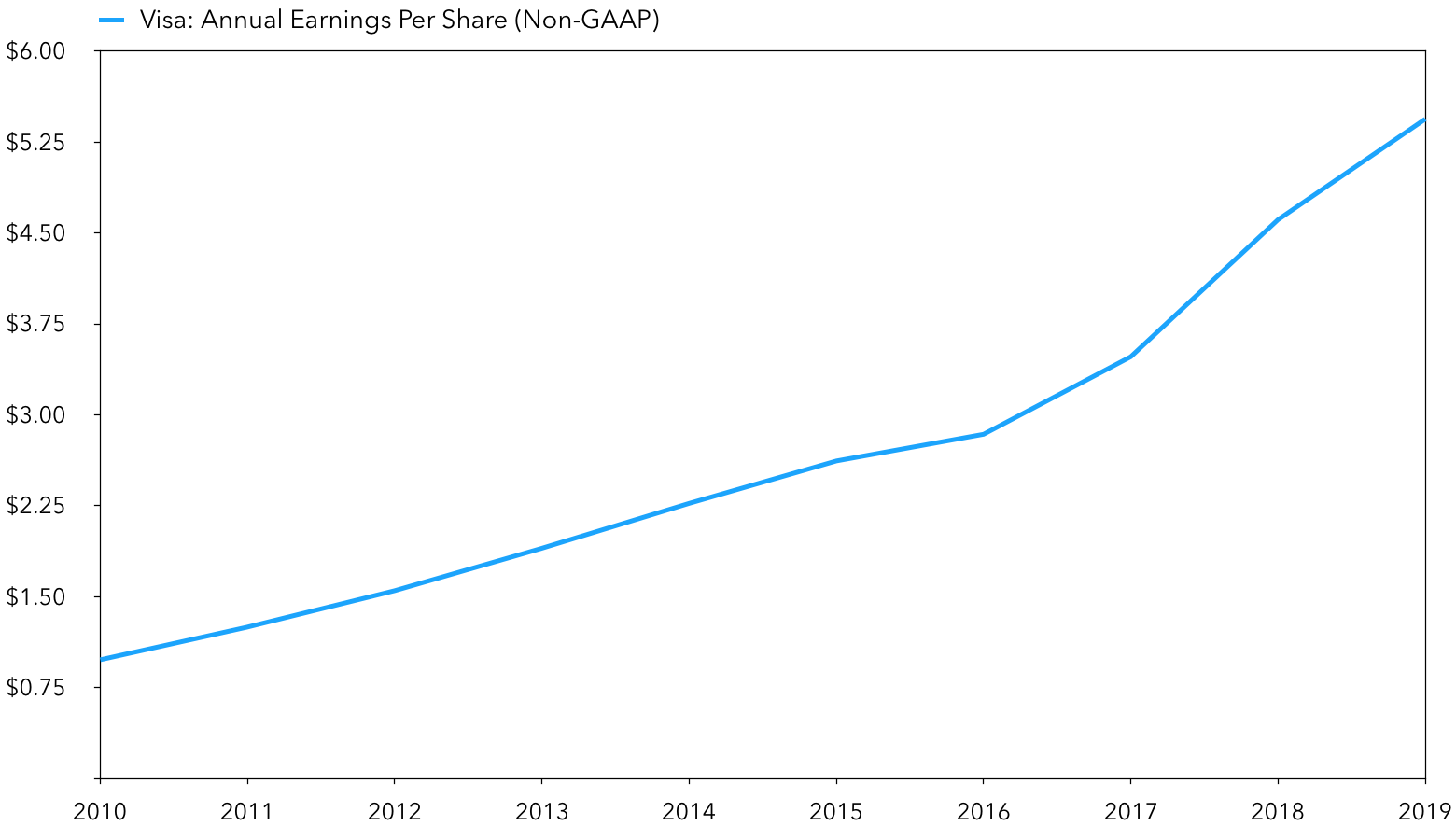 Anyway, the company had expected profit to land in the $6.20 per share range this year before COVID-19 reared its head. I will not dwell on the impact of the virus too much because it goes without saying that previous guidance may no longer be appropriate. You can apply that sentiment to most of the stock market. That said, we can realistically expect the company to return to this level of profit generation within the next few quarters.

Here’s why buying at $135 per share just a few weeks back was such as a good deal. In ten years’ time, Visa could easily earn north of $20 per share in annualized net profit. We are also looking at tens upon tens of billions of dollars in post-dividend retained profit in the intervening period. Speaking of dividends, I expect the company to pump somewhere in the region of $30.00 per share by way of cash distributions during that time. Overall, that translates into double-digit annual shareholder returns absent a massive shock from legal or technological issues.