Media firm ViacomCBS (VIAC), the owner of assets such as Paramount Pictures, CBS and Nickelodeon, is one in a long line of stocks that are now priced for destruction. It trades for 3x estimated 2020 underlying earnings of around $5.30 per share (pre-COVID-19). That isn’t a typo by the way; the company’s stock has lost over 60% of its value since the turn of the year. Heck the merger between Viacom and CBS only completed last December, though that seems like a lifetime away now. 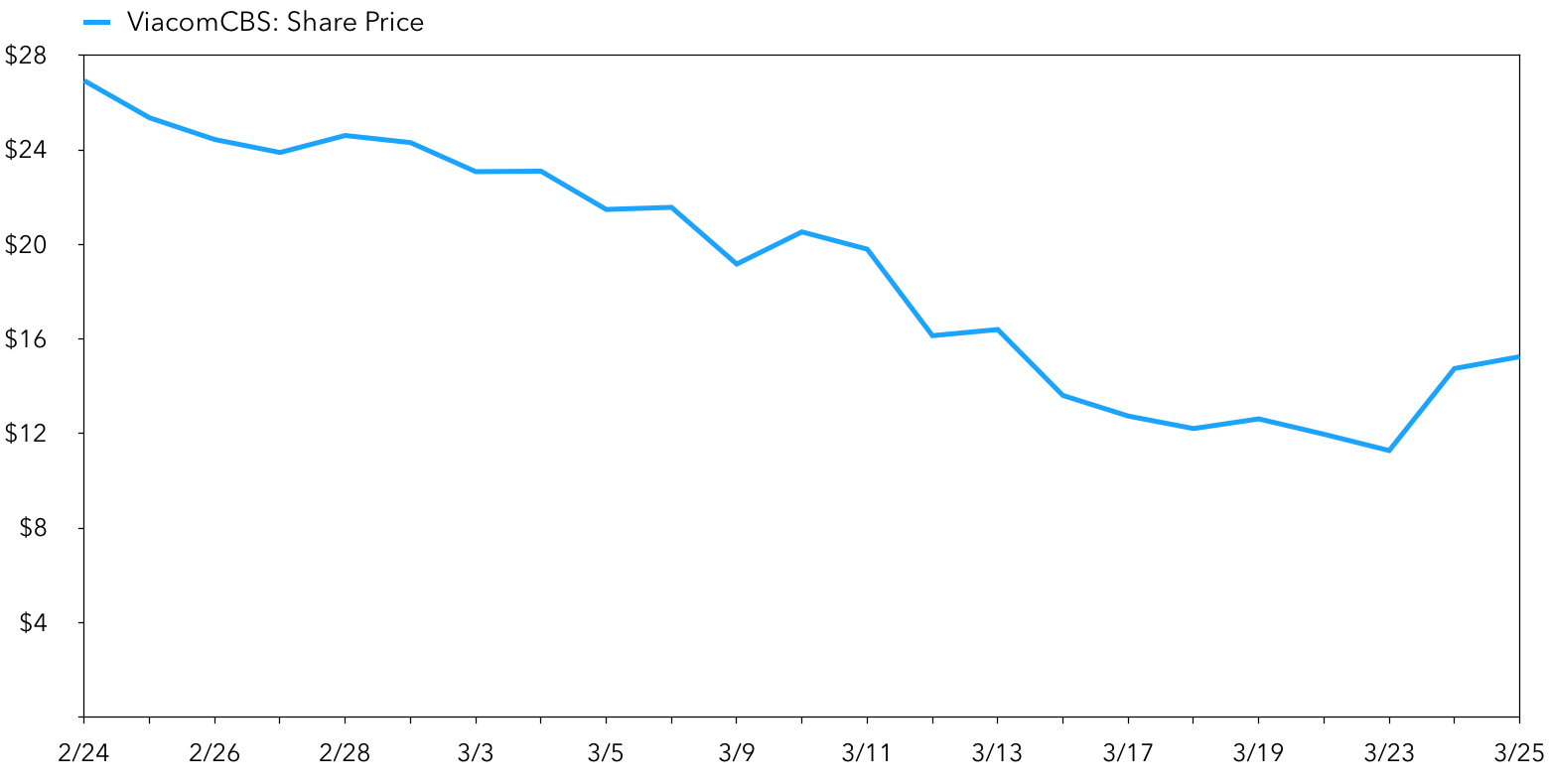 On the face of it, it’s not hard to see why this one has been hit hard: it has clear exposure to severely disrupted sectors of the economy. Take live sports for instance, much of which is now cancelled. The loss of the NCAA men’s basketball tournament, to take just one example, is estimated to cost CBS $350m in advertising revenue.

The motion picture industry is another one. Paramount Pictures, though not a huge source of overall company profit, will surely take a hit given movie theaters all over the world are closing their doors. Indeed the release of A Quiet Place Part II has already been moved to later in the year.

That said, not all of the company’s assets have exposure to the current situation. Children’s pay-TV channel Nickelodeon seems like a good example of that. In fact the entire Cable Networks segment – that’s the one holding assets like Nickelodeon, MTV, Comedy Central and Showtime – generated over half of company-wide operating profit last year. I’d expect that segment to hold up relatively well.

I base that last statement on Viacom’s performance in the last global financial crisis. Advertising revenue dropped a bit, as you’d expect, though the company-wide headline figures held up well. Furthermore, we are still in an election year here. That means political advertising dollars will hopefully provide a positive bump to revenue.

The other big issue facing the company right now is the $18,000m net debt load. It cost the company around $930m in interest payments last year so getting it down is a worthy endeavor in its own right. Anyway, the good news is that only $717m is due this year. The company expected circa $1,800m worth of underlying free cash flow over 2020, though that was obviously before the coronavirus really took off. The dividend – now yielding around 6.5% – costs the company around $600m per annum.

On the face of it those figures make Viacom’s finances look at bit precarious. On the plus side, it has a $3,500m untapped credit facility that doesn’t mature until 2025. Now, this credit facility requires ViacomCBS’s net debt-to-EBITDA ratio to clock in at less than 4.5x over a trailing twelve month period. Quick math puts EBITDA at around the $5,000m last year, so the company has plenty of headroom on that basis.

This is where is gets really interesting. Right now the stock trades at an absurd 3x forward profit estimates. Now, that valuation obviously doesn’t take into account two things. Most obviously the COVID-19 situation puts most of corporate America’s earnings estimates into the dustbin. Secondly, the price-to-earnings valuation ignores the aforementioned debt situation.

On the first point, COVID-19, there’s not much to say except that it will pass eventually. By its nature, I don’t see how it can have an impact, as bad as it may well be, for more than a few quarters. When it does pass, you have a business pumping out over five bucks a share in profit versus a current share price of around $16.

As for the debt load, it clearly makes the true valuation somewhat more expensive. The current enterprise value stands at around $27,000m. Call that an EV-to-EBITDA ratio of around 5.5x. That’s still pretty cheap in my book. Not only that, but the company has the cash flow means to hammer debt down to its target of around 2.75x OIBDA.

Here’s the thing – the stock was over $35 per share just a month ago. At the start of the year it was over the $42. Right now? It trades for around $16, actually up 45% compared to two days ago. It closed at just over $11 per share on Monday. Although it may prove a volatile journey, my guess is that ViacomCBS stock sees its earlier-2020 levels again in the relatively near future.