Around three months ago I briefly profiled Vanguard’s High Dividend Yield ETF. As a reminder, this is basically a domestic large-cap value fund that aims to track the FTSE High Dividend Yield Index. It takes the broader index, eliminates REITs and non-dividend paying stocks, then ranks what’s left in order of dividend yield. It then goes down this list until half the total market-cap of eligible securities is reached.

This creates something that is not quite the crude dividend strategy that its name suggests. Indeed, despite nominally being a ‘high yield’ fund, it is more like a blue chip value fund. If you like the larger dividend paying stocks, then VYM seems like a solid asset with which to accumulate long-term wealth.

At this point, I’d like to introduce its much smaller sister fund: Vanguard’s International High Dividend Yield ETF (VYMI). It only has circa $1,400m in net assets versus over $33,000m for VYM. Anyway, the clue as to the main difference between these two is obviously in the name. Whereas VYM focuses solely on domestic stocks, VYMI does the exact opposite. Own them both, and you are essentially running a very simple global large-cap value strategy.

You can imagine the kinds of names that dominate the fund’s holdings. Whereas VYM has big chunks of Exxon Mobil and Chevron, VYMI owns large blocks of Royal Dutch Shell and BP. Whereas VYM counts Pfizer and Merck in its top-ten, VYMI counts GlaxoSmithKline and Sanofi. Procter & Gamble? Unilever. Intel? Taiwan Semiconductor. I’m sure you get the picture – we are talking stodgy foreign-listed blue chip stocks that typically offer fatter dividend yields than the average.

Here are some of the things I like about VYMI. For one, you get your fill of foreign blue chip stocks in one simple asset. As per Vanguard, just under half of the fund’s portfolio contains European-listed equities, and just over a fifth apiece comes from the Pacific-area and emerging markets. Canada takes up most of the rest. Simple, with no need to deal with multiple different foreign stock exchanges. It represents a solid ‘sleep well at night’ solution to that particular issue.

Second, at 0.27% per annum, the expense ratio strikes me as quite reasonable (it recently came from down 0.32% per annum). It’s obviously higher than VYM – which at six basis points is dirt cheap – but the costs involved for the fund are also higher I’d imagine. It is also cheaper than its international-focused high yield peers, as far as I can tell anyhow. Also, and just as with VYM, it should sport a lower turnover ratio compared to its peers. I generally think that is a good thing.

One other thing to maybe bear in mind. This is a very passive vehicle. It doesn’t employ any additional screens, and neither does VYM for that matter. We can expect more volatile dividends on that basis – the 1Q20 drop was already pretty savage. If that is a deal breaker for you, then maybe better to think about something like the iShares Core High Dividend ETF.

I think this is probably the most interesting aspect to VYMI right now. According to Vanguard, the portfolio’s weighted average P/E ratio currently stands at circa 10.5x earnings. That figure is obviously based on last year’s profit figures, not the looming disaster of 2020. Weighted annual earnings per share growth has clocked in at 6.3% on average over the past five years. Finally, the fund’s trailing-twelve-month dividend yield stands at around 5.3%. 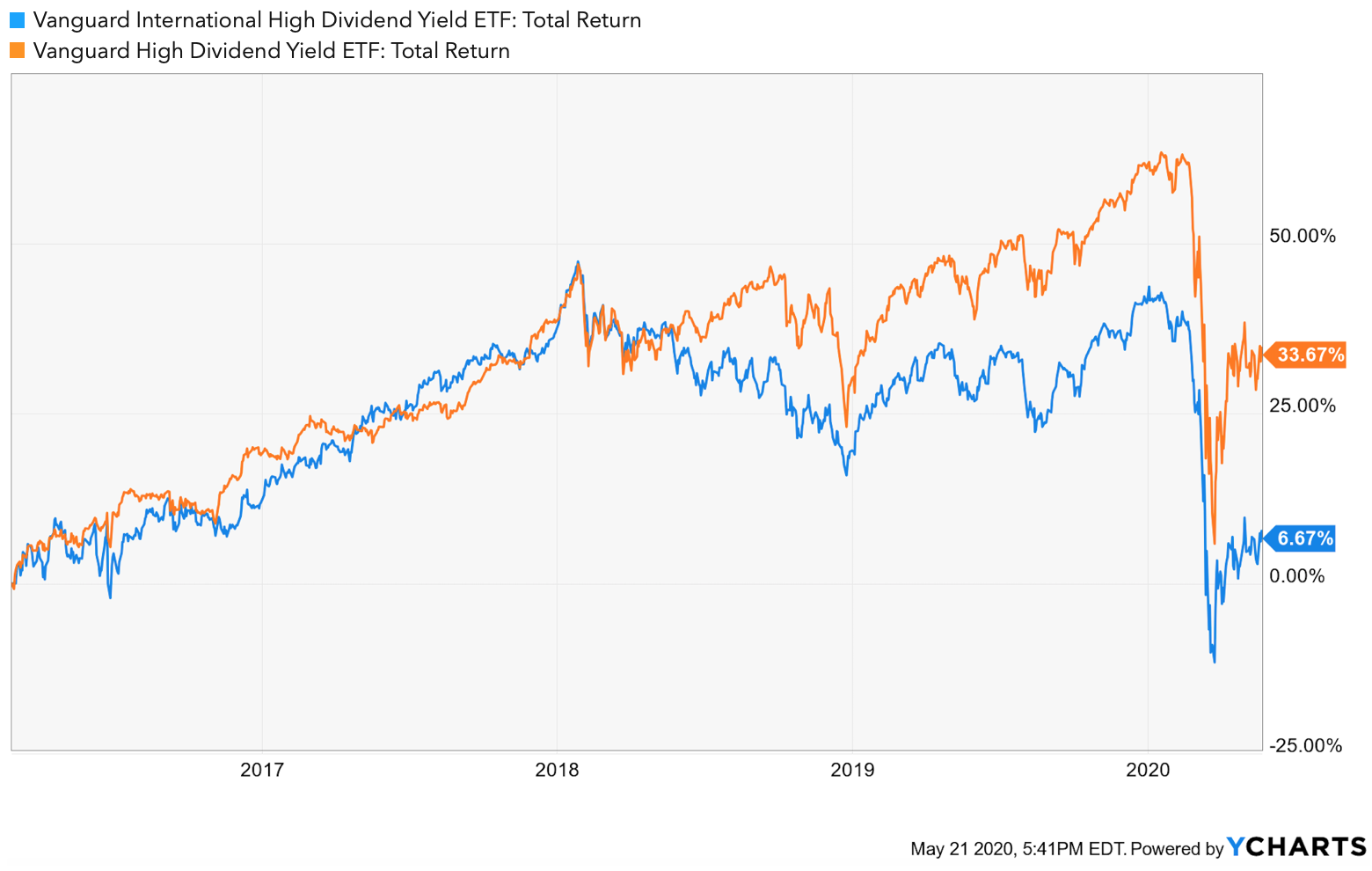 The fund hasn’t been around all that long – it only just turned four last quarter – so there isn’t much to go on by way of historical comparison. If you bought VYMI at inception, it has returned pretty much zero by way of capital appreciation. The $8.90 or so per unit paid out in cumulative dividend cash brings things into slightly positive territory. In contrast, VYM has done quite a bit better on the total return front.

Anyway, the above numbers strike me as reasonably attractive in terms of long-term wealth creation here. Just by way of comparison, VYM trades at a P/E ratio of 16x earnings, with weighted annual earnings per share growth clocking in at 6.5% on average over the past five years. VYM’s trailing-twelve-month dividend yield stands at circa 3.6%. On the face of it, international blue chips look quite attractively valued versus their American counterparts. Time will tell if that proves to be the case.

Hershey: It’s Been A While