The Incredible Consistency Of PepsiCo

On the face of it PepsiCo stock’s recent performance has been very similar to that of other consumer defensives. That is to say that earnings growth has been fairly subdued with shareholder returns primarily a result of certain ‘unsustainable’ measures. What do I mean by this? Well, the most common criticisms include dividend increases in excess of earnings growth, debt funded stock buybacks, and market exuberance leading to undeserved valuation expansion.

At first glance the headline numbers seem to support that thesis. For example back in 2012 the company posted total revenue of $65.5 billion. By the end of 2018 that figure had actually decreased slightly to $64.6 billion. The earnings numbers look a bit better but are nothing to really shout home about. In 2012 the company made a net profit of around $3.90 per share. By the end of 2018 that figure was up to around $5.25 per share – equivalent to average annual growth of about 4.9%. 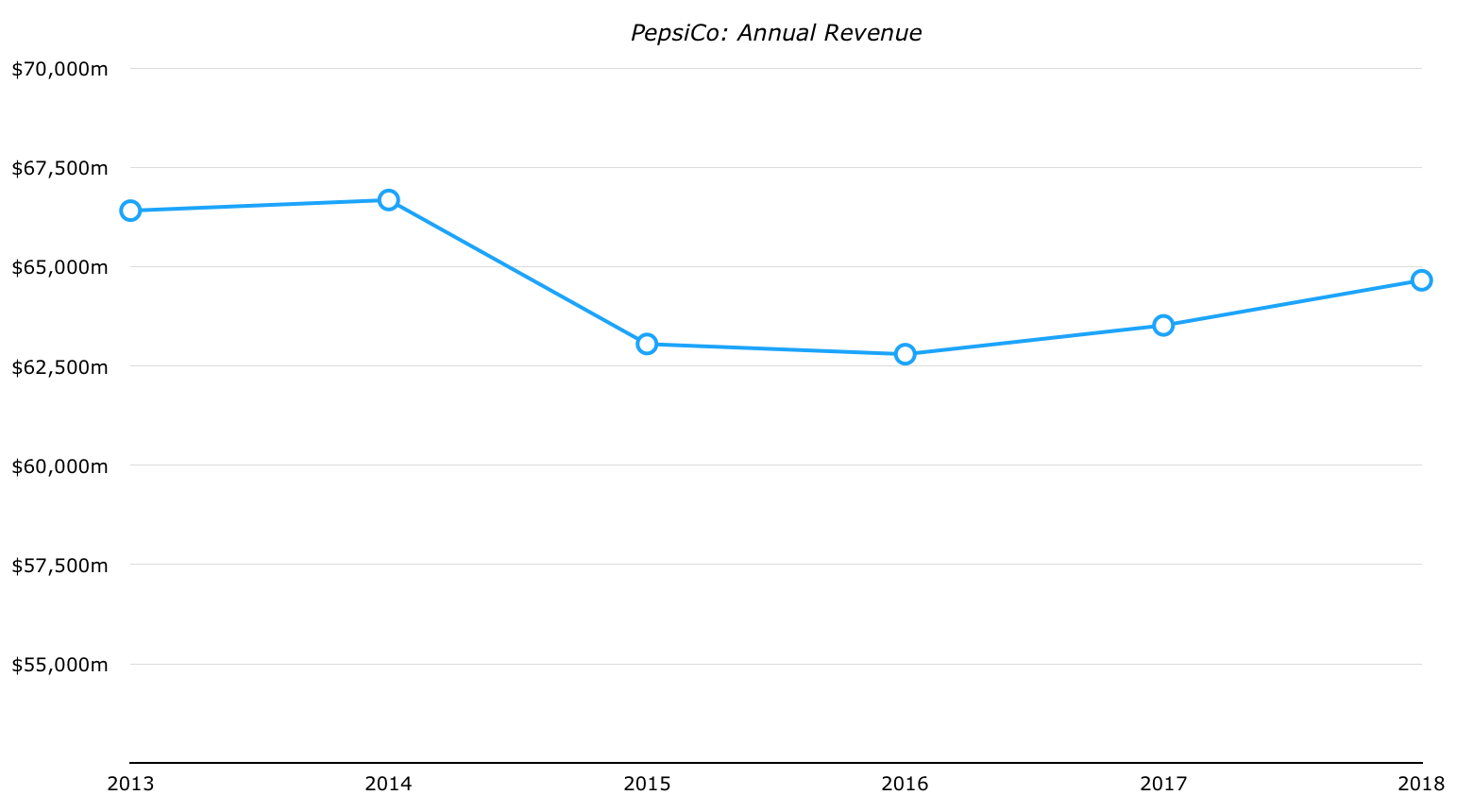 Meanwhile shareholder returns have decisively beat those headline business numbers. At the start of 2012 you could purchase the stock for around $69.15 on the New York Stock Exchange. By the end of last year that number had risen to around $110. On top of that the company paid out cash dividends worth around $17.25 per share. If you let those distributions pile up in a bank account somewhere you would have generated a total return of 95%. Reinvesting them into more stock made you an extra ten percentage points on top.

When dealing with company figures the overriding temptation is to simply pull them from any old data provider. Though it’s tempting to take this easy way out – and I’m guilty of it all the time – it’s good to surround yourself with a stack of annual reports and dig deeper from time to time.

The good thing about PepsiCo is that management breaks down its results in quite a bit of detail. For instance check out what happened in 2015. The headline number that ends up being quoted shows normalized earnings per share of $4.57, down a disappointing 1.3% on 2014 earnings of $4.63 per share. At first glance it looks like the company is going into reverse gear. Remember these figures represent normalized profit – that means we can’t even blame certain one-off hits such as the impairment to the Venezuelan business.

However what these dollar dominated numbers don’t represent are foreign currency movements. These cost PepsiCo a massive eleven percentage point hit to the per-share net income figure that year. In other words, solely due to the fact that the company’s publishes its accounts in US dollars did it report a per-share profit drop of 1% rather than growth of 10%.

In some places these swings can reach absurd levels. For example check out what was going on in the Europe Sub-Saharan African segment that year. It reported segmental net revenue of $10.5 billion – down over 20% on its 2014 level. Operating profit for the segment fell by the exact same amount. This isn’t some trivial part of the company’s business we are taking about here either. Europe is a big market for PepsiCo, with the segment as a whole accounting for one out of every five dollars the company generates in sales.

Now, to the shareholder based at home in the USA that performance looks utterly awful. The company must really have sold way fewer bottles of Pepsi and bags of Lay’s chips right? Perhaps management slashed prices in order to entice consumers? Maybe even a combination of both of those things? Nope. In reality it was entirely down to unfavorable currency movements. In fact to the PepsiCo executives stationed on the ground in Europe and Africa business probably looked fairly good. The company actually sold both more sodas and more snacks in the region that year than it did in the year before. In currencies such as the British Pound, Polish Zloty and South African Rand the results would have looked fine. 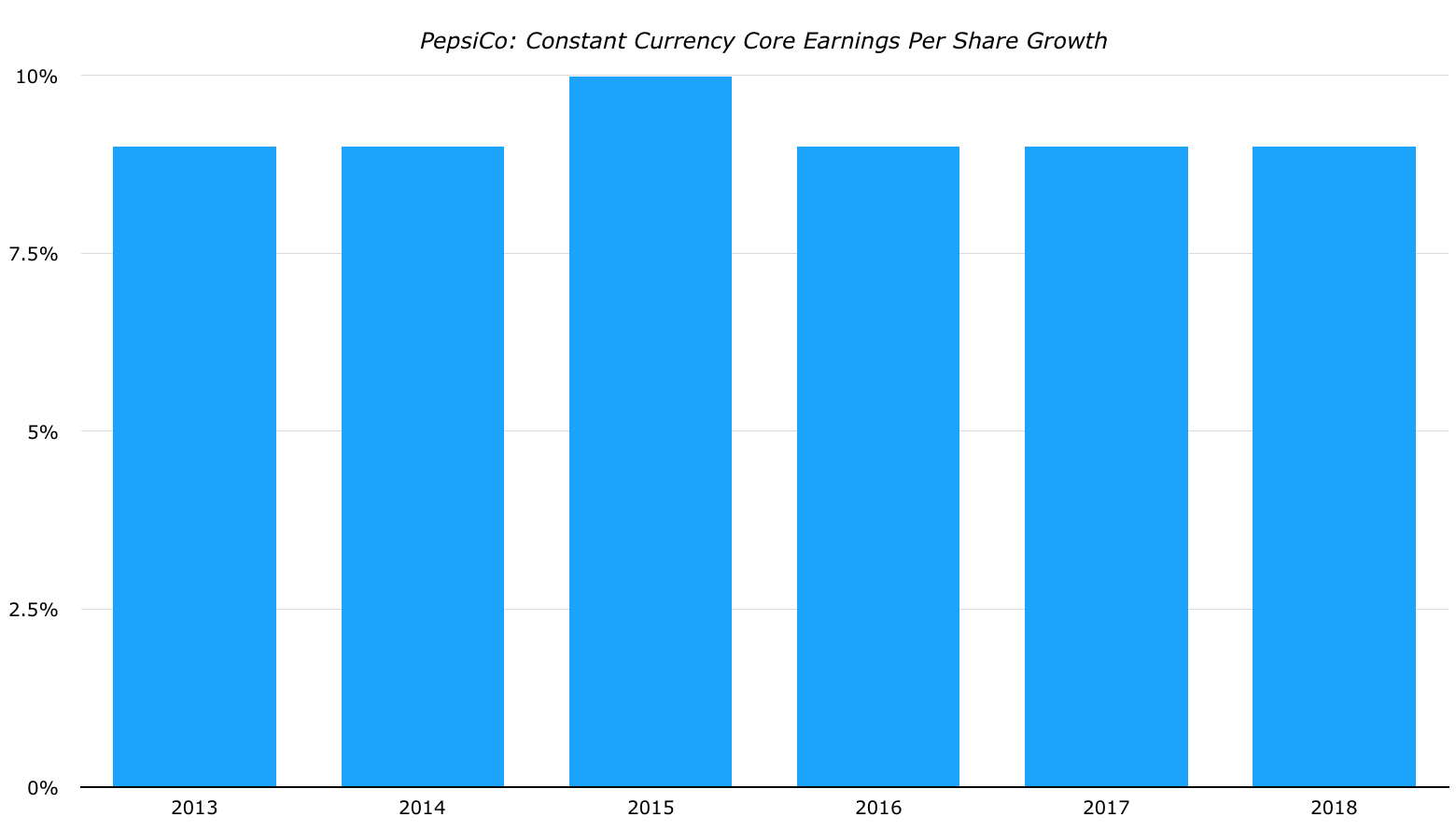 When you digest all of these currency movements and back out non-recurring expenses a few things become apparent. First of all it’s incredible how stable the company’s underlying business has been. Over the past five years it has hummed along generating core profit growth in the 9% per annum range. The second thing you probably noticed is that this figure exactly matches PepsiCo’s dividend growth rate over the same period. I’m sure this isn’t a coincidence given management has a full view of the big picture. Far from being a result of undeserved exuberance, PepsiCo’s returns look justified by the company’s operating results.