A lot of ink has been spilled on the malaise afflicting Kraft Heinz stock. Broadly speaking there seem to be four key points of concern. Firstly, the lingering issue of debt vis-a-vis earnings and cashflow. Secondly, the pressing need of the company to invest in its brands and stabilize operations. Thirdly, the $15 billion impairment change which included hits to the Kraft and Oscar Mayer brands. Finally, accounting issues regarding procurement practices delayed the release of last year’s results until early last month. On that final point I don’t think too much needs to be said. The financial impact arising from these issues is pretty minor relative to the size of the business. In the grand scheme of things it is points one, two, three and four that are the most concerning.

Let’s start with Kraft Heinz’s debt load. As things stood at the end of last year it had total outstanding net debt of around $30 billion. The business pumps out EBITDA in the $6.5 billion per annum range, while net profit is currently running around $3-$3.5 billion. Between cash from its day-to-day operations and a mooted program of non-core brand divestments there’s probably enough to make meaningful inroads in getting leverage down to a lower level. Indeed the company recently closed the sale of its Canadian cheese business for around $1.25 billion. That said don’t be surprised if the $1.60 per share annual dividend – worth around $2 billion per year in cash terms – sees another cut. 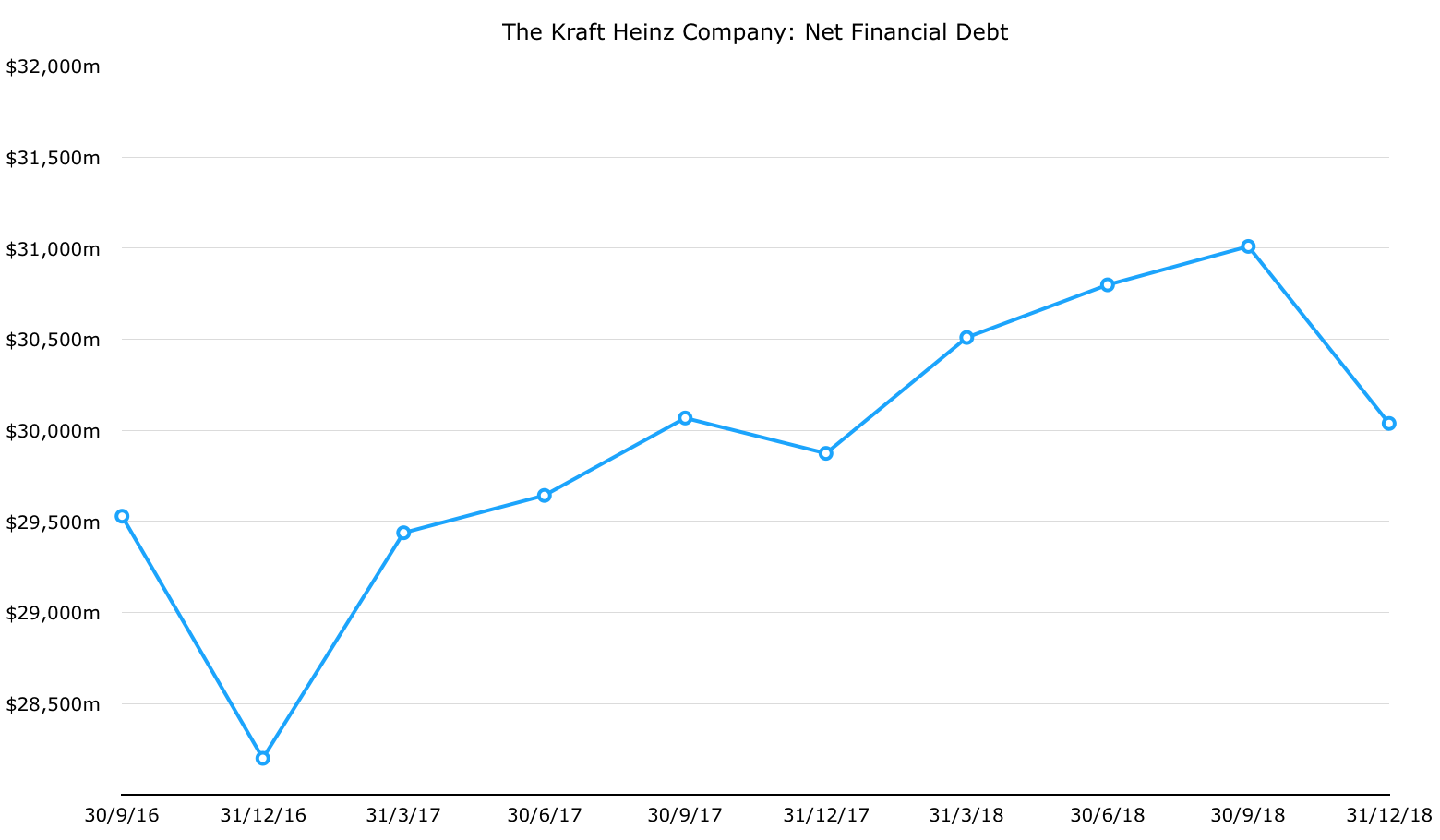 Regular readers know that I tend to focus a lot on debt reduction. I was pounding the table for a dividend cut here before Kraft announced the 90 cents reduction last year. One of the reasons for that is pretty straightforward: at a depressed equity valuation (half of Kraft Heinz’s enterprise value is made up of debt) it is easy to generate decent shareholder returns simply through deleveraging. For instance last year the company currently paid around $1.05 per share in interest to service said debt. If Kraft Heinz went from carrying a debt load of 4.5x EBITDA, which is where it is now, to 2.5x EBITDA, it would save around 45 cents per share in annual interest. That alone is worth around 15% of current annual net profit per share. Achieve that over say five years, and all of a sudden it has ‘created’ 3% per annum earnings growth.

Aside from diverting cash from bondholders to the bottom line there is another good reason for a distribution cut. The company needs the spare cash to invest in its brands, and that brings us neatly on to points two and three. The thing with Kraft Heinz is that not all of its brands are of equal quality. Heinz Ketchup, for example, is probably still on the gold standard and well in the first tier of global consumer brands. It is the number one ketchup brand in seven of the the ten largest global ketchup markets, including the largest – the USA. Not only is it utterly dominant – US market share is around 60%, while in the UK it is closer to 80% – but the global ketchup market is growing at around 5% per annum.

Unfortunately many of its brands are much weaker. The $15 billion write-down, which included hits to the Kraft, Oscar Mayer, Philadelphia and Velveeta brands, is a case in point. The temptation here is to view this as a lessor issue since it isn’t actually a cash loss. I mean it isn’t like that money literally disappeared from a Kraft bank account after they announced it. So what does it mean? Put simply: cashflows from these brands will be lower in the future.

According to management this is due to a number of reasons including higher interest rates and supply chain issues. They also mention lower future net sales growth and profit margin downgrades. Those latter two reasons are the ones to concentrate on. A more conservative take is that these brands are proving much more susceptible to the two commonly cited threats to fast moving consumer goods: competition from store owned discount brands and changing consumer trends.

If that proves to be the case then the risk to the overall business is quite clear. In 2017 total group EBITDA was around $7.8 billion. This year management have guided for annual EBITDA of around $6.4 billion. You can see the direction of travel, and it isn’t good. On top of that, management have told us that future growth and margins will be lower on a big chunk of sales. That is why the write-down is of major importance. 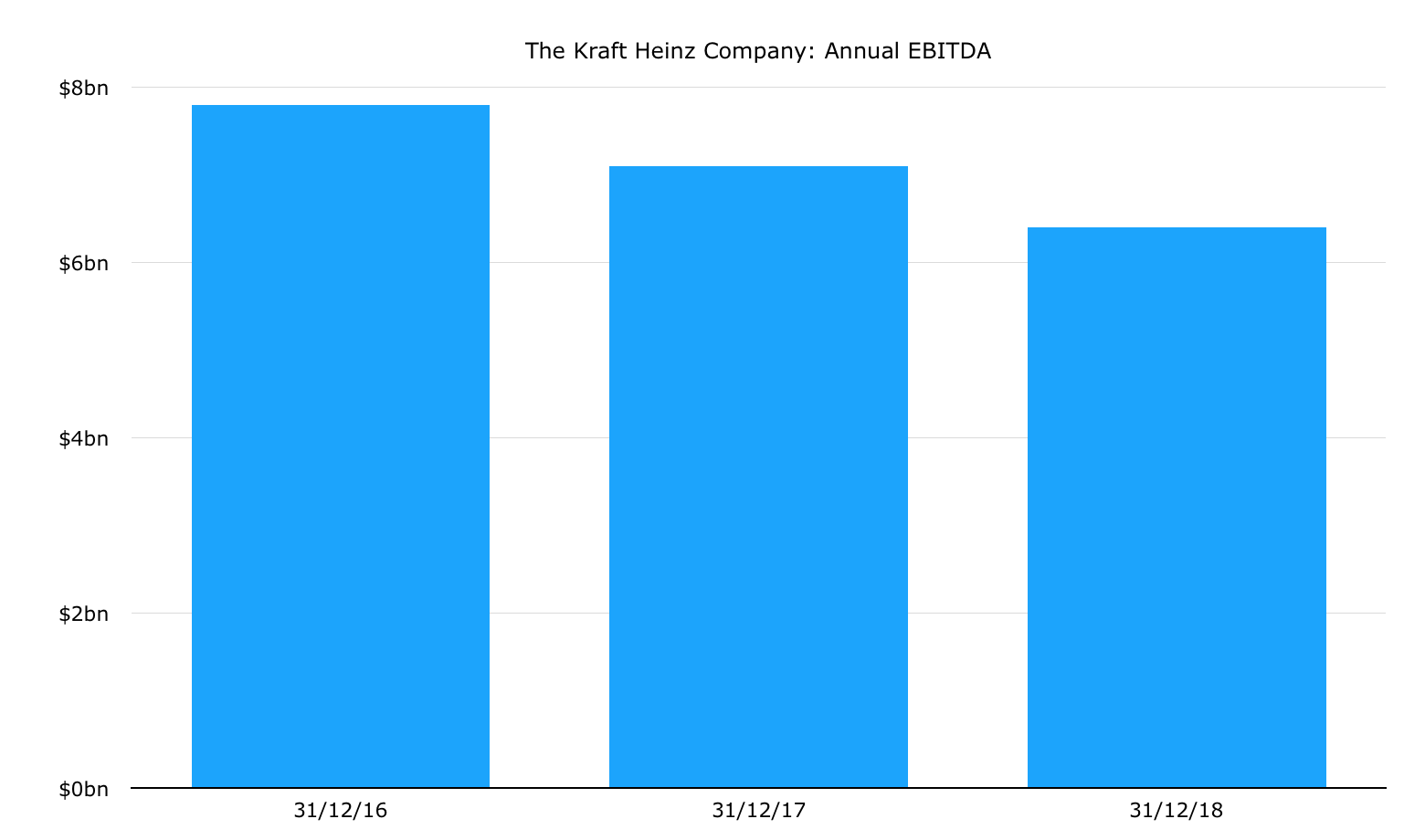 The one final point worth talking about is valuation. Fortunately this is where we finally reach something of a positive point because Kraft Heinz stock is reasonably cheap. The current earnings yield is around the 10% mark. It can grind out earnings growth on top of that simply by reducing its debt burden. This base case only really depends on one thing: profits not falling off a cliff. What if the company returns to organic growth one day? What if the earnings multiple expands from 10x to 15x on the back of stable operations and a lower debt load? You’d be looking at double digit returns pretty quickly. In terms of risk/reward that strikes me as a reasonable proposition.