Comcast (CMCSA) stock strikes me as reasonably priced right now. As it stands, shares in the Philly-based media/cable giant trade for around $42.20 apiece. I make that equivalent to a price-to-earnings ratio of circa 13.5 based on expected FY19 net income of $3.10 per share. To provide some additional context to that figure, analysts see growth coming at around 11% next year. Put another way, there is a decent chance that Comcast stock will trade under 12.5x earnings in 2020, all other things being equal.

So what gives here? A solid blue chip stock going for around 12x forward earnings in this market seems odd. Doubly so given Comcast has grown net income at a double-digit clip over the past decade. My gut instinct says three things, which I will address in turn below.

Firstly, the absolute level of debt looks pretty high here. The company reported total debt of circa $97,000m net of cash at the end of 3Q19, primarily a result of its acquisition of UK media and pay-TV company Sky. That is equivalent to an extra $21 per share, while the 13.5x price-to-earnings ratio quoted above is more like 20 in debt-adjusted terms. Needless to say, that looks quite a lot less cheap, though still reasonable given double-digit profit growth. 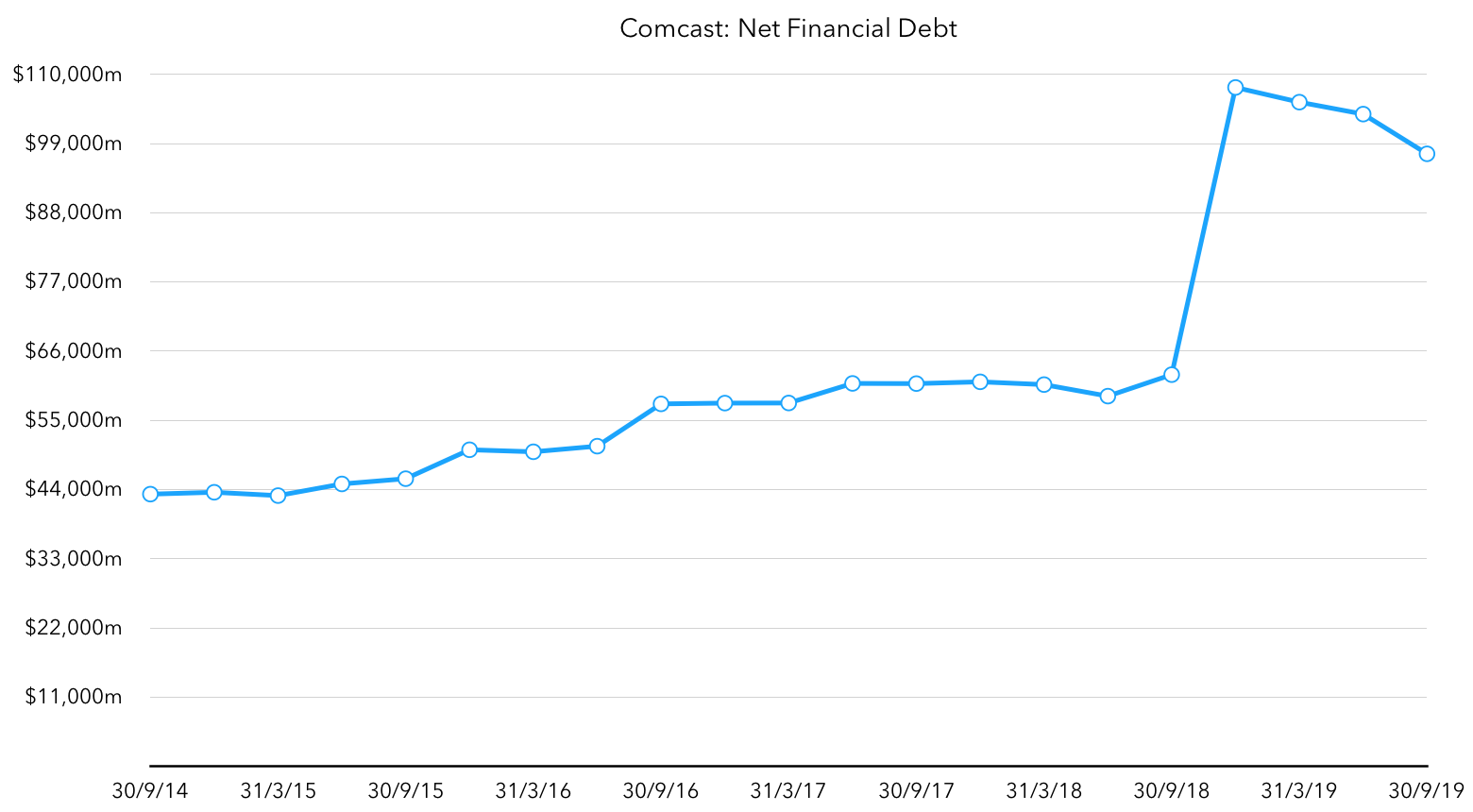 Second, some commentators worry about the company’s cable-TV business. In the era of Netflix and streaming, you have to wonder how long the legacy pay-TV models will hold up. Why pay one hundred bucks per month on cable when Netflix only sets you back a fraction of that? Even if you threw in Disney+ and something else, you’d be looking at significant recurring monthly savings. This is increasingly becoming a no-brainer for folks that don’t need live sports.

Third, there is some concern that politicians will crack open the internet service provider market on antitrust grounds. Presidential candidate Bernie Sanders, for instance, recently unveiled such a plan. Profit margins at Comcast’s Cable Communications segment (which houses 28m high-speed internet customers) would surely take a hit. The same plan would also ban service providers from owning media content. Given Comcast owns NBCUniversal, one of the biggest media companies on Earth, then its business would surely be broken up under those particular proposals.

I’ll address each of these three points in turn, starting with the debt load. Nearly $100,000m in reported net debt is a large figure, no doubt about that. On the flip side, Comcast is also a massive cash generating machine. It generated circa $25,800m in EBITDA during the first nine months of the year, while free cash flow clocked in at a shade under $11,000m in that time. I reckon the business should pump out around $10,000m in excess cash this year after meeting its dividend commitments. That would give the company ample room to reduce debt at a healthy rate. 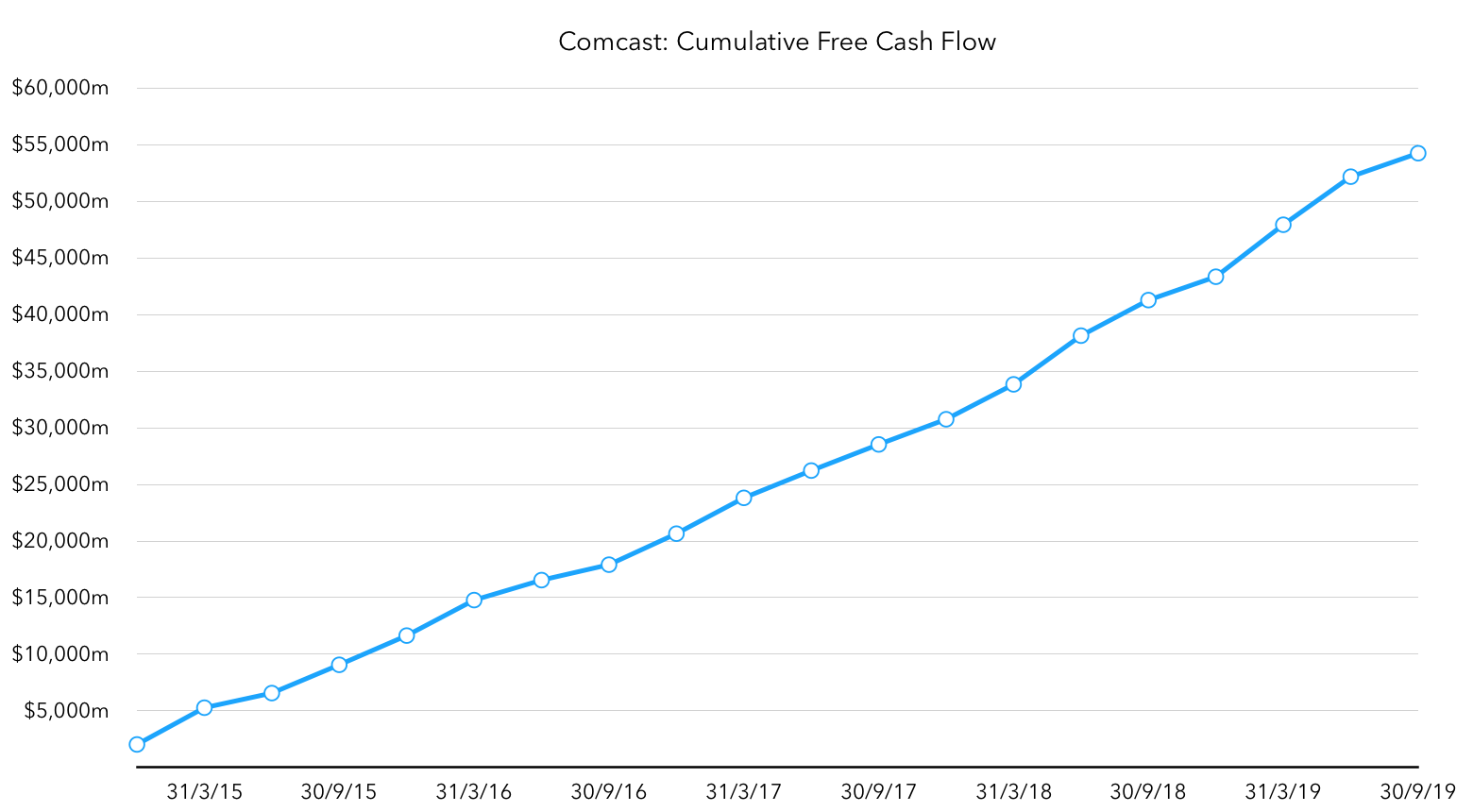 The second point also looks valid, at least at first glance. I mean, the company reported a 3Q19 net loss of circa 220,000 residential cable-TV subscribers in the United States compared to 3Q18. That was the tenth quarter in a row of net residential video customer losses, and leaves Comcast with around 20.4m remaining residential cable customers in the US. By way of comparison, the company had one million more domestic cable-TV customers just two years ago.

That is clearly having an impact on overall group finances. Comcast generated circa $16,700m from its cable-TV operations in the United States over the first nine months of FY19. The comparable figure back in FY17 was $17,400m. The situation looks similar with Sky in Europe. The satellite-TV company lost around 99,000 customers in the third quarter.

The good news is that the company is making this up elsewhere. For instance, its high speed internet business posted 9M19 revenue of $13,900m. The comparable figure at the same point in FY17 was $11,000m. In fact, and taking into account the internet usage requirements for streaming content, you could even argue that folks dumping cable-TV en masse would, at worst, be neutral for Comcast’s overall business.

That leaves point three, the antitrust issues. On that particular issue I’d offer two counter points. First, it’s worth bearing in mind that Comcast’s business is pretty diverse. I’ve barely even mentioned the assets inside its NBCUniversal subsidiary. Those include its theme parks, which pulled in around $1,800m in EBITDA over the first nine months of 2019; the film studio – which house franchises such as the Jurassic Park film series; and cable networks such as Golf Channel, CNBC and MSNBC. The cable networks alone generated circa $3,400m in EBITDA in 9M19 from affiliate fees and advertising.

The second counter point is a note from history. Forced break-ups, though not sounding particularly welcome, don’t necessarily work out badly in the long run. Imagine your ancestor owning the original Standard Oil monopoly back when it was broken up in 1911. Assuming the resultant companies were passed on, that means you would own the likes of Exxon Mobil, Chevron and BP today. A more recent example would be the Bell System, owned by AT&T until its breakup in the early 1980s. Holding the resultant “Baby Bells” up to the present day would give you ownership of assets such as the modern day AT&T (which itself now includes the likes of Warner Media and DirecTV) and Verizon, amongst others.

On that basis, I’m not overly concerned. At the stock’s current earnings yield of circa 8% (25% of which is paid out as cash dividends) and earnings growth estimates of 10%, it does not seem a stretch to imagine Comcast returning double-digit annual returns here on out.