Occasionally I get asked why I don’t write about indexing on The Compound Investor. Actually I may do going forward, but probably only in the scope of fixed income and foreign (i.e. non-US) equities. Anyway, it’s a good question. I mean two of the most popular assets in 401(k) retirement plans are the Fidelity 500 Index Fund (FXAIX) and the Vanguard 500 Index Fund (VFIAX). There are tens of thousands of individual accounts out there that have $1m-plus stashed in these things.

The reason I don’t really write about domestic index trackers is because I don’t think I’d ever subject myself to the methodology that underpins, say, the S&P 500. Personally, I’d rather pick a few dozen of the best businesses, buy them and then make new purchases (with dividend cash and fresh capital) on a value basis. Absolutely no selling, with rebalancing not involved. All you really need are accounts at Computershare and Equiniti, plus a dedicated checking account (or easy-access savings account) to hold dividend cash.

Now don’t get me wrong here, if you aren’t a stock nerd like me (and let’s face it most folks aren’t) then go ahead and stuff your retirement and tax-sheltered accounts full of something like FXAIX. Relative to the amount of additional legwork required (i.e. zero beyond getting the cash in the first place) you will, in all likelihood, compound ahead of inflation and create yourself real tangible wealth.

Considering the expense ratio for FXAIX is like 0.015% per annum, that is a pretty good deal. Oh, and you’ll still end up with constant economic ownership of some of the best businesses known to man. Although the weightings may change pretty often, the likes of Disney, PepsiCo, McDonald’s, Coca-Cola and so on will always be there. Heck between them those four have well over two-hundred years of unbroken S&P 500 membership.

Anyway, the question of indexing got me thinking about the Voya Corporate Leaders Trust Fund (LEXCX), previously known as the Lexington Corporate Leaders Trust. Although the name sounds as dry as anything, the story here is one of the most interesting you’ll come across. It was founded back in 1935 with the simplest mandate in the world: buy, and then hold. That’s literally it. No purchases of additional stocks allowed. No constant rebalancing all the time. Heck Union Pacific stock makes up like 35% of the fund’s assets.

Obviously the initial purchases were informed by the experience of folks in the Great Depression. Banks were not included for example. The initial constituents – thirty in total – were seen as bluey blue chips at the time. Original names in the portfolio include Procter & Gamble and General Electric.

Here’s the funny thing. Today, the fund holds around twenty names all together. A handful of the original constituents went bust over the 85-year stretch – understandable given the timeframe involved. The stock count has also reduced as a result of merger and acquisition activity. For instance you’ll see that Berkshire Hathaway is actually in the fund despite not being an original constituent. That is because it acquired BNSF Railway Company, which itself had merged with the Atchison, Topeka and Santa Fe Railway, one of the fund’s original constituents, back in the mid-1990s. 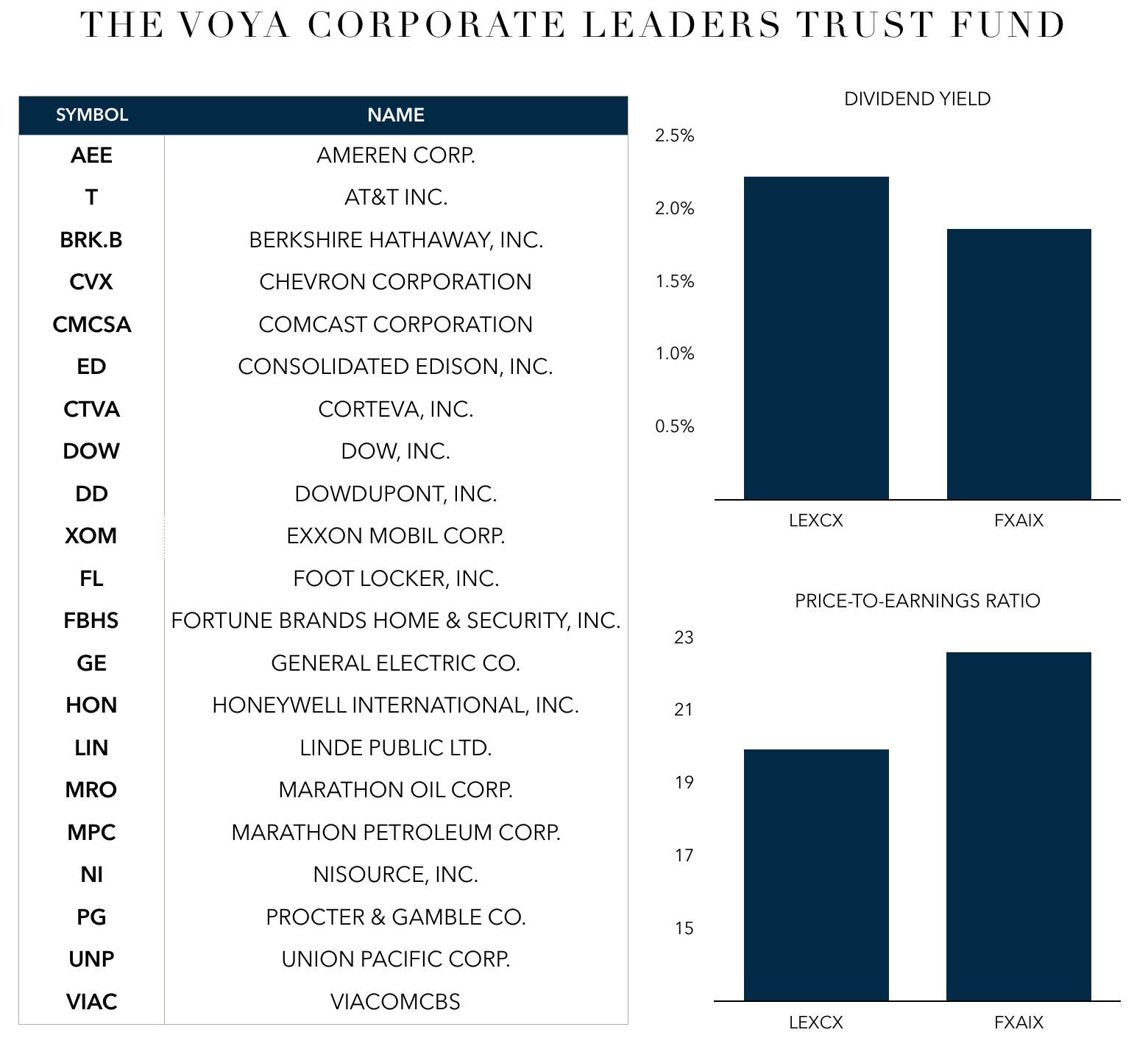 Other names that stand out on that basis include Comcast, Chevron, Exxon Mobil and ViacomCBS. The two oil giants trace their history all the way back to Standard Oil Company of New Jersey and Standard Oil Company of California. Comcast, despite only existing since the 1960s, can trace its membership back to American Telephone & Telegraph (the original AT&T). The current incarnation of AT&T – a favorite of contemporary dividend investors – also makes the present list of holdings. ViacomCBS has literally only existed for a couple of months in its current incarnation, however it traces its inclusion all the way back to Westinghouse Electric Company (an original fund constituent) which purchased CBS back in the mid-1990s.

You could actually go on like this for hours. And that’s before breaking those companies down into their constituent parts. I mean AT&T owns the likes of CNN, HBO and Warner Brothers. Exxon Mobil is also one of the world’s largest chemical companies. Berkshire Hathaway is a sprawling conglomerate that owns chunks of Coca-Cola and Wells Fargo, as well as wholly-owned subsidiaries like GEICO. And so it goes on.

Now, at this point you are going to expect a big number in terms of the fund’s overall return. We’re talking about 85-years of compounding here. I’m not sure if there’s data going all the way back to 1935, but according to the trust’s 2018 Form S-6, $10,000 invested in 1941 would have been worth around $21,500,000 at the end of 2018 (assumes dividends and capital distributions were reinvested). It has, over very long timeframes, outperformed the S&P 500. 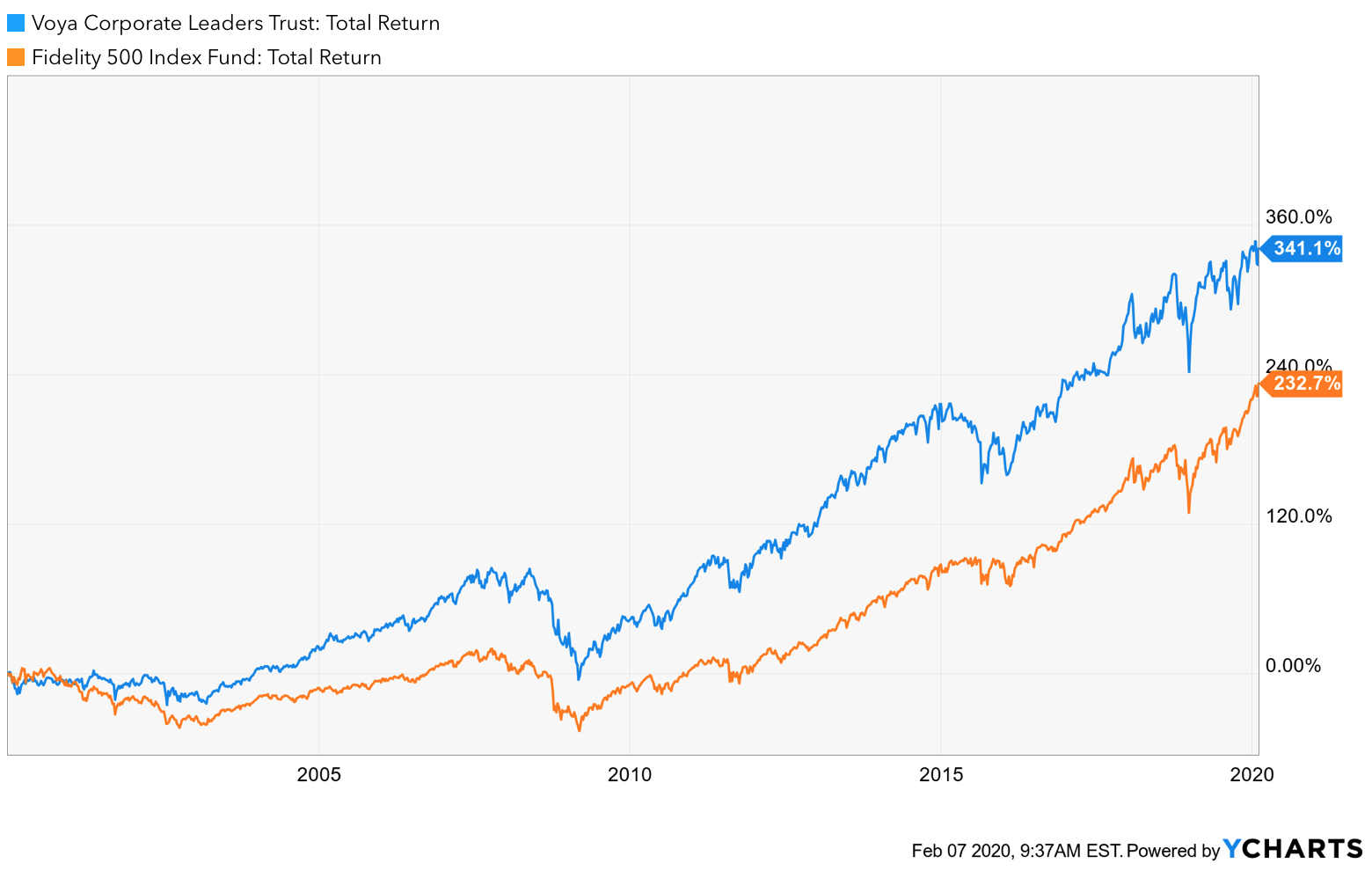 Just think about how counterintuitive this all is. No Amazon, Apple, Microsoft or Alphabet stock to juice returns. Heck there are no technology stocks period. Yet none of it mattered one bit: the Voya Corporate Leaders Trust Fund has still outperformed the benchmarks. Now, at this point I have to be a bit careful because we’re obviously picking up on a winner here. Extrapolating this and making a ‘thing’ out of it runs the risk of falling for survivorship bias. Or put another way, how many funds constructed like LEXCX didn’t survive?

Research from Dr. Jeremy Siegel showed that a portfolio containing just the original S&P 500 constituents outperformed the index when measured over a long enough timeframe. I’m not sure when his work was last updated, but my understanding is that other studies have shown the same thing. That is to say that tinkering is detrimental to long-term returns.