Turn the clock back twenty years to the mid-1990s. Coca-Cola (KO) was dominating the world of soft drinks and had done for years. The business was in great shape and the stock had delivered phenomenal returns over the past several decades. Such a business would surely go on to produce good returns going forward, right? Nope, in fact the stock went on to have an exceptionally poor run by historical standards.

Let’s look at what a $10,000 investment in Coke stock actually generated in terms of shareholder returns. Firstly, the rather easy consideration of the share price performance. An investor would have had to pay a split-adjusted price of $20.80 to own one share of Coke stock at this point in 1996. Armed with his $10,000 capital, our investor therefore picks up a total of 480 shares.

Twenty years on, those shares have a current market value of about $22,500. That works out to average annual share price growth of circa 4.15% if my math is right. By way of comparison, the S&P 500 has delivered returns of just over 6% per annum over the same period. Okay, so that might look a little bit disappointing to our investor.

On the plus side, Coca-Cola remained an absolute profit machine. Indeed, it has been for many, many years. The company has survived wars, recessions, depressions and pretty much everything else that has happened since it went public in 1919. I mean, just check out the performance of the business in the early-1990s. Average revenue growth clocked in at circa 9% per year during that period. Net income grew at a double-digit annual clip. Profit-per-share had almost quadrupled since the late 1980s and the dividend distribution had more than trebled. By any reasonable metric Coca-Cola was firing on all cylinders. 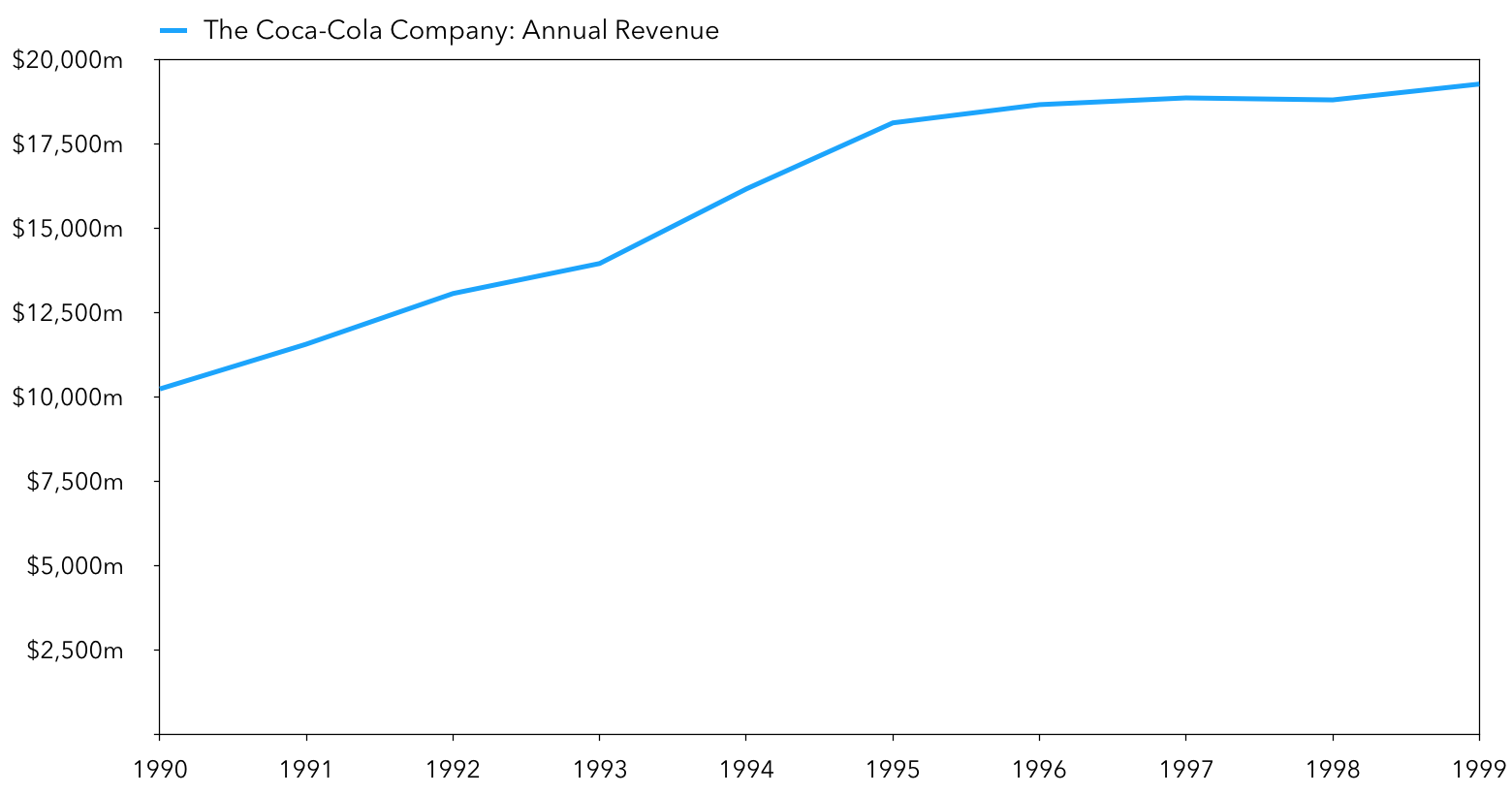 As we know, the reason for our investor’s disappointment was his lack of appreciation for the stock’s valuation in 1996. Let’s say he scanned the price-to-earnings ratio just after his purchase of Coke stock. Had he done so, he would have seen the shares trading at 34x prior year earnings. It represented an incredibly rich valuation given interest rates at the time, not to mention the growth required to justify it. Today, the stock trades somewhere in the region of 23x earnings; still somewhat expensive in historical terms, but way down on the 34x multiple it had in 1996. This is what has eaten into our investor’s capital appreciation.

Of course, the above is presenting only part of the story when it comes to Coca-Cola’s shareholder returns. After all, the dividend machine remained in full and increasing cash spewing mode over that period. So, let’s run the second scenario. Let’s assume our investor lost the password to his broker account and the dividends just kept on accumulating. That cash ended up sitting in his account, not being reinvested into more Coke stock (or anything else either). Had that scenario unfolded, our investor’s broker account would currently hold around $6,410 worth of Coca-Cola dividend cash. 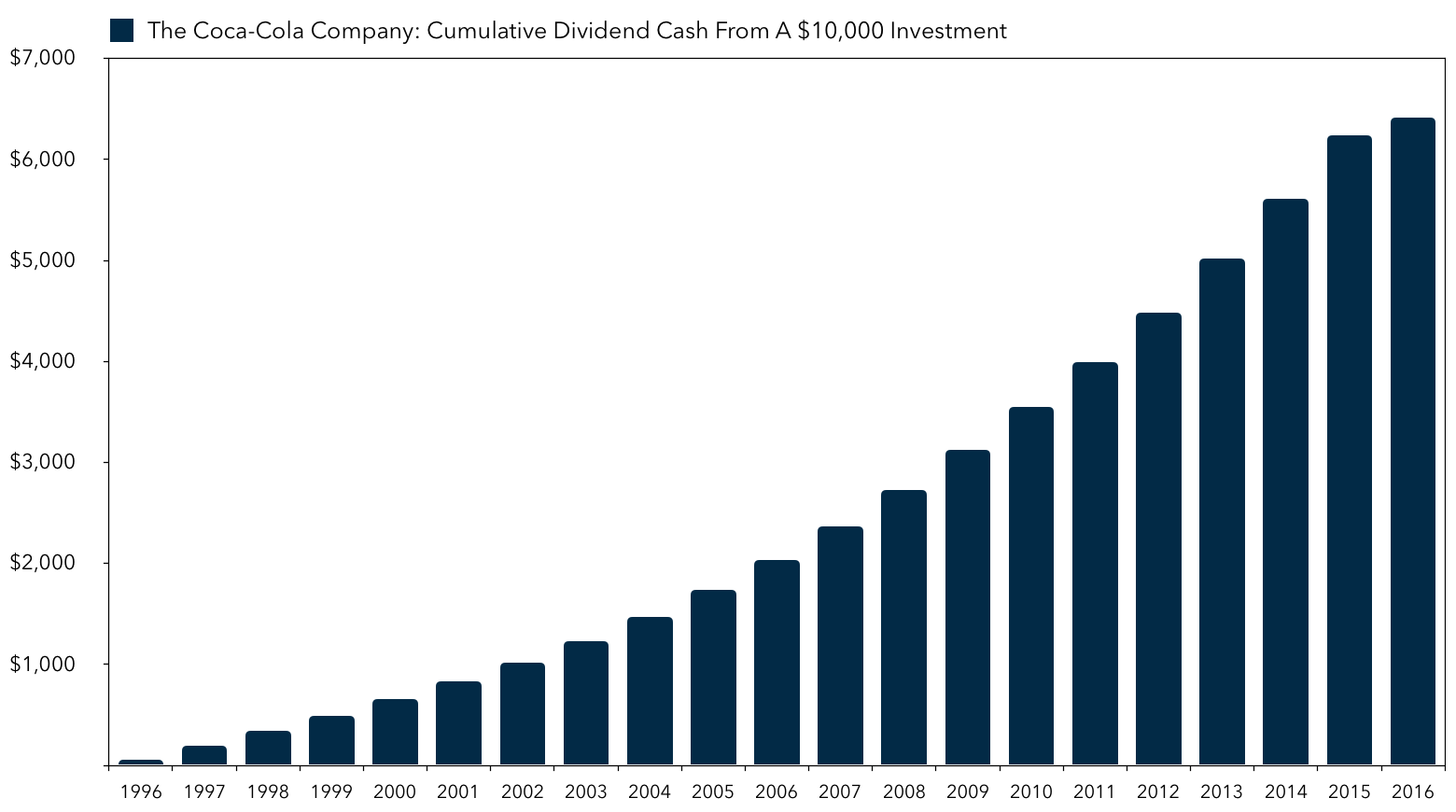 So, to sum up: we have $22,250 in Coca-Cola stock, plus an additional $6,410 in cash. By my count that makes for a total return of $28,660 on the initial $10,000 capital outlay. On a compound average basis, that works out to annual returns of around 5.4%. Now it starts to look a tiny bit better for our investor (even though in hindsight he picked a pretty poor starting point in which to invest a lump sum).

The final scenario is to assume that before our investor forgot his account password, he at least managed to change the settings to automatically reinvest any dividends back into more Coke stock. In this case, the total return amounts to $35,250 worth of Coca-Cola shares. Quick math puts that at around 6.5% in terms of annual returns (and a one percentage point per year increase compared to just letting the dividends accumulate).

That performance doesn’t look too bad overall. I mean, it certainly isn’t great. It underperformed the 8% annual returns (including dividends) of the S&P 500 over the same period. That said, there are a couple of additional points to consider here. First, the starting value of the stock was insanely expensive relative to the future growth potential of the company. Indeed, the stock actually only topped out two years later. That meant dividends were being reinvested into even more overvalued stock for a whole two years.

Secondly, the share price didn’t actually hit rock bottom until five years after that. Or put another way, our investor was actually looking at seven years before the stock even started to approach an attractive valuation. That’s a good chunk of the twenty-year timeframe just spent in the wilderness of dead money territory.

It might seem painful at the time, but putting money to work – even if it is just reinvesting dividends when the share price is going sideways – can have a huge impact on returns down the line. All things considered, beating inflation by three percentage points every year isn’t such a bad outcome after all. And that was made possible because the underlying business continued to be the profit machine that it had been historically.

Exxon Mobil: The Past Twenty Years