As its name suggests, Shell Midstream Partners (SHLX) is a dropdown MLP consisting of midstream oil & gas assets initially spun out of Royal Dutch Shell. We are basically talking about things like oil pipelines and terminals here. In return for transporting and storing oil, gas and refined products, the partnership realizes a cut based on the volume being shipped. Think of it as the energy equivalent to operating a toll booth; a great asset to own if you want reliable income.

That is the theory anyway. In practice, things are a bit more complex. For instance, oil pipelines and terminals don’t just spring out of thin air. This is an incredibly capital intensive industry and that kind of infrastructure costs a lot to build out. Furthermore, the inherent nature of oil & gas production means that crude product pipelines aren’t going to be in demand for ever. Shell Midstream, for example, is heavily exposed to offshore production in the Gulf of Mexico. (Total offshore throughput volume is around 1.9 million barrels per day and accounts for a huge chunk of the partnership’s net income). 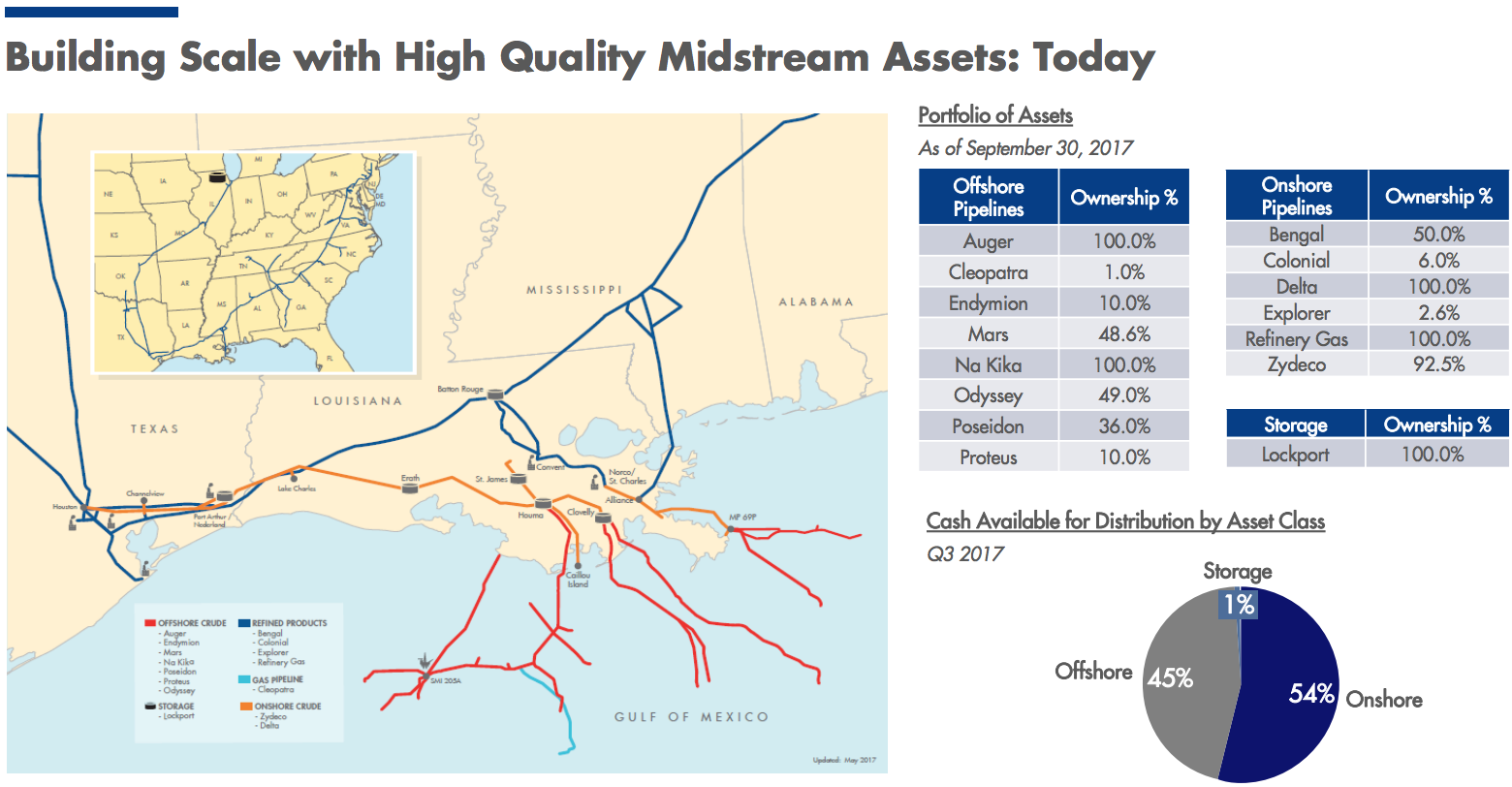 On the plus side, a toll booth business model is less susceptible to the kind of volatility that producers or refiners experience as result of commodity price changes. For instance, check out the Bengal pipeline system, which Shell Midstream has an interest in via a 50% stake in the Bengal Pipeline Company LLC. Bengal is a refined products pipeline system that connects a handful of refineries in southern Louisiana to various other longer-haul pipelines.

Throughput at Bengal has averaged around 500,000 barrels per day over the past few years. In 2018, Shell Midstream’s cut came to around 34¢ per barrel. In the year before that, revenue per barrel was also 34¢. You can probably guess what it was in 2016. Granted, not all of Shell Midstream’s assets report numbers as tidy as that, though average them out and you find group revenue is quite stable for a commodity company.

A couple of other points put Shell Midstream at the better end of the MLP spectrum. Firstly, it tends not to build the infrastructure itself, rather they “drop down” from the parent company (i.e. Royal Dutch Shell). Of course, this doesn’t happen free of charge. The partnership has taken on around $2,000m worth of debt and issued an extra 150m units since IPO. But getting assets that already exist and collect revenue is less risky than planning and building them from scratch. 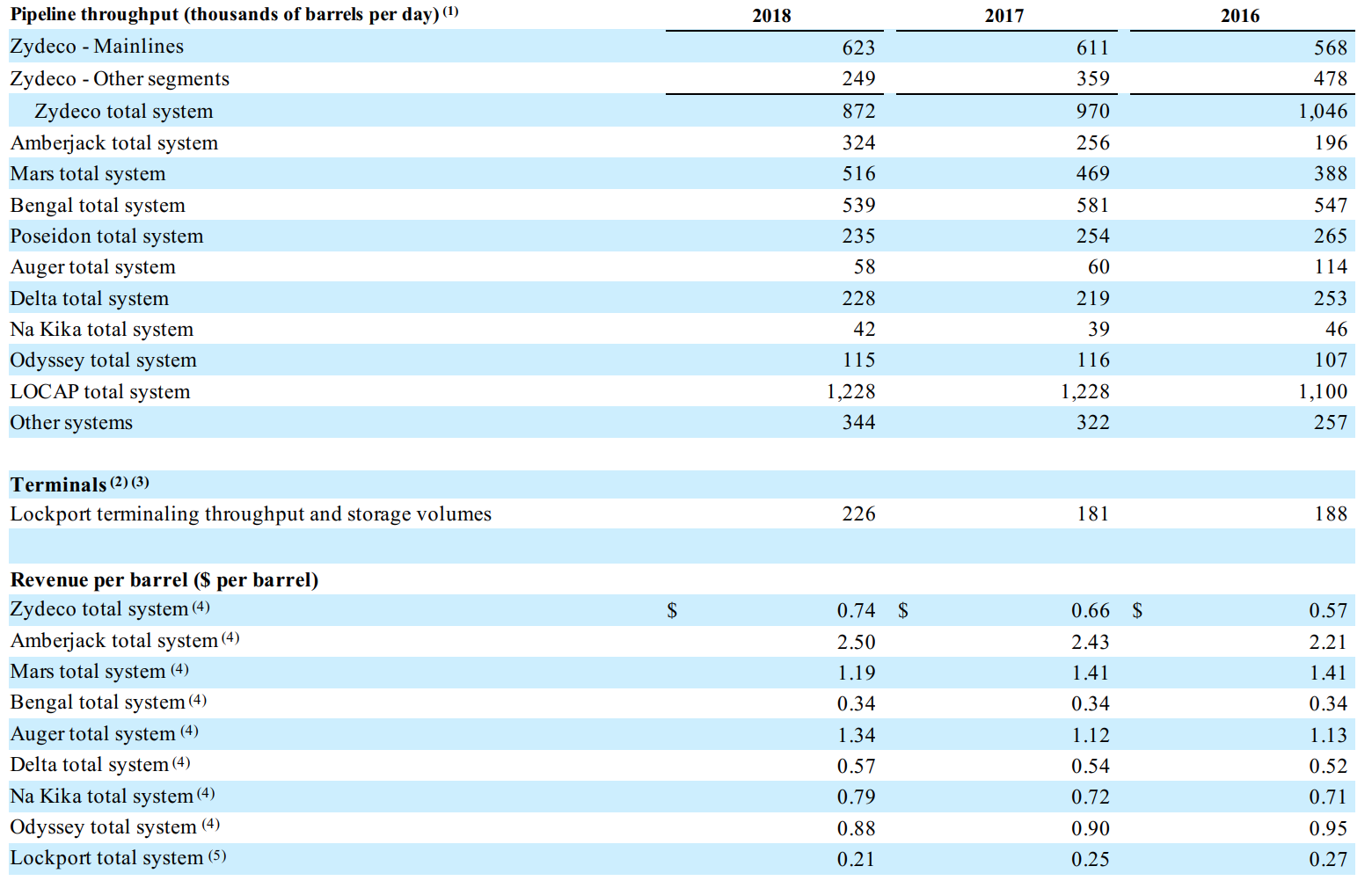 Secondly, and as far as MLPs go, Shell Midstream has numerous growth drivers. The most obvious one is the parent company itself. It still has numerous assets it can dropdown to the partnership, and more are currently under construction. Indeed, Shell Midstream has just acquired interests in two refined products pipelines from Royal Dutch Shell. Production in the regions served by the company’s assets has also been steadily rising. For instance, overall production in the Gulf of Mexico is forecast to reach 2.1m barrels in 2020. That represents circa 50% growth on 2015 production levels.

This all feeds through to Shell Midstream’s operational performance. After all, more volume equals more cash. Over the three months ended December 31st, 2017, Shell Midstream reported distributable cash flow (DCF) of around $95m. That figure had jumped to around $150m in the equivalent period last year. Even after taking into account unit dilution, that is an impressive performance. (DCF basically equals EBITDA less interest payments, taxes and maintenance capital expenditures).

The rapid growth in cash flow has translated into healthy per-unit distribution growth. In its first full calendar year as an independent entity Shell Midstream paid a total distribution of around 67¢ per unit. It paid $1.43 per unit in total last year, and it is on course to pay around $1.70 in 2019. Finally, the balance sheet is in decent condition. Total debt currently stands at around $1,900m net of cash against roughly $620m in annual EBITDA. With an annual interest bill of around $65m, servicing its debt obligations shouldn’t be an issue either.

The bad news is that the units have been a dud for a while now. As it stands they trade for around $20.50 apiece on the New York Stock Exchange, around 50% lower than their 2015 highs. The good news is that we are now heading deeper into value territory. If the distribution is frozen at the current quarterly level of 41.5¢, then we would still be left with a yield north of 8%. We are then very quickly hitting the 10% yield mark assuming growth carries on as forecast. The prospect of getting your investment paid off within a decade strikes me as a good one overall.