written by The Compound Investor September 6, 2018

The “dividend millionaire” stories are by far the most popular type of content on the site. Month after month it seems to rank number one in the list of search engine terms that bring folks here. The prospect of earning tens of thousands of dollars a month in passive income is obviously a big draw! Hopefully I can keep serving them up.

On that note the story of Russ Gremel is one that caught my eye recently. I first discovered it in 2017 and it resurfaced a few months back when news broke that he had died. As young boy Russ Gremel saw his life tipped upside down by the Great Depression. His father had been a speculator and lost everything in the preceding stock market crash. In Gremel’s own words they went from “comparable wealth to abject poverty in twenty-four hours”. He credited the experience as a motivating factor for his buy-and-hold style.

As far as I can tell Gremel’s investing story began in around 1947/48. That was the moment he invested the quite significant sum of $1,000 (roughly $11,000 in today’s terms) into shares of Walgreens stock. His reasoning for picking Walgreens? Folks will always need medicine and women will always buy makeup. And that’s it. His story literally is as simple as that one single investment (as far as reports go anyway).

As you’d expect the returns were fairly spectacular. That $1,000 initially sunk into Walgreens stock seventy years ago was worth around $2 million dollars by the time Gremel donated it to the Illinois Audubon Society last year. If my math is correct that means his initial investment compounded at an average rate of 11.5% per annum.

There are a couple of things that make the Gremel story stand out. Firstly, it is rare that we get a story that deals with a one-off investment. Most folks tend to save along the way for obvious reasons. In Gremel’s case the severe length of time his investment had to compound made up for the lack of regular saving.

Just to put things into context let’s imagine that Russ Gremel was a bit late to the investing game. Rather than starting out at the age of 27/28 in the late-1940s imagine that he made that Walgreen’s investment two decades later instead. The net effect of having around 30% less time in the market means he would have needed eight-and-a-half times the initial investment in order to make that $2 million donation in 2017. 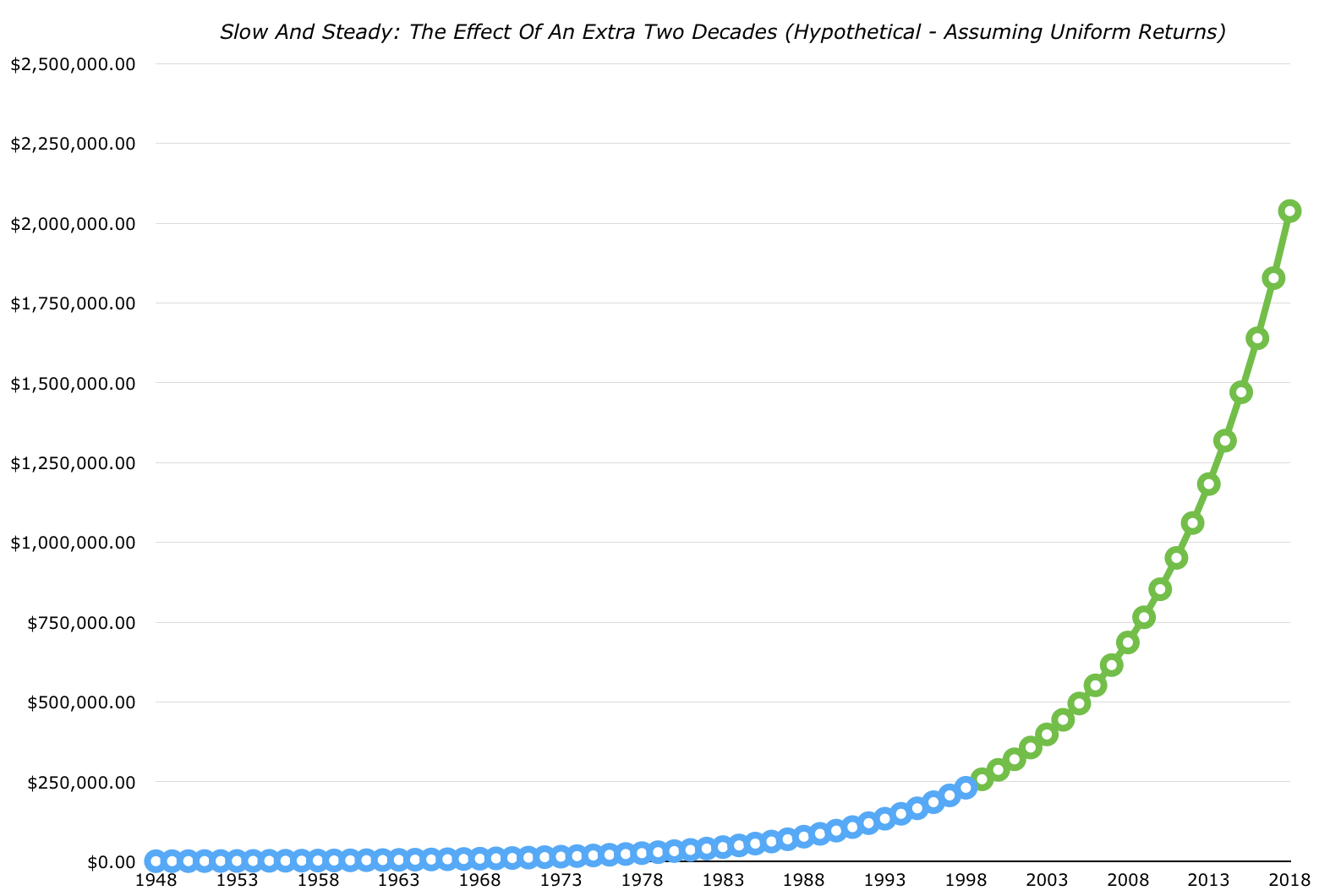 Secondly Gremel’s personal circumstances mean he could leave the investment virtually untouched. Like most folks I’ve profiled so far Russ Gremel did not marry and he did not have any children. He lived a frugal life, though in his case it seems that he did not use the savings from his frugality to finance stock investments. Instead he committed 10% of his earnings to savings, and presumably that is what partly financed his early retirement from practicing law at the age of 45.

Lastly, a comment about Russ Gremel’s age. Like nearly all of the folks that I’ve profiled so far he was blessed with remarkable longevity. According to the CDC the average life expectancy in the United States is around 78.5 years. Had Russ Gremel passed away at that age, rather than at the grand old age of 99, we probably never hear this story. It’s just the nature of compounding that the contribution of the last couple of decades is vast. That said you don’t need to rely on that kind of extraordinary longevity. If Russ Gremel managed this with the equivalent of $11,000 in today’s money then regular savers can definitely repeat the feat.

Comcast: Growth At A Reasonable Price