On Thursday morning Royal Dutch Shell (RDS) released financial results covering the fourth quarter of 2019 (“4Q19”). I think it is fair to say the market reaction has not been overly positive: as I type the stock is down circa 3.4% in New York, which follows similar trading earlier on in both London and Amsterdam.

Now, the last time I covered Shell on The Compound Investor was last summer. Barrels of Brent crude oil were changing hands for around $62.30 apiece at the time. As I type Brent is currently languishing in the $58.40 per barrel area. Perhaps unsurprisingly Shell ADSs have lost around 14% of their value over the same timeframe.

In terms of the financials here are some of the headline numbers. CCS earnings excluding identified items (basically Shell lingo for normalized net income) clocked in at $2,900m for the quarter and $16,500m over 2019 as a whole. On a per-ADS basis (remember one ADS trading on the New York Stock Exchange represents two underlying ordinary shares over in Europe), Shell reported CCS earnings excluding identified items of $0.74 in 4Q19 and $4.08 for the year as a whole.

Usually when it comes to Shell most folks want to hear about one thing and one thing only: the dividend. Alongside its quarterly results announcement the oil & gas giant declared a static $0.94 per ADS quarterly cash dividend. Readers will no doubt notice that quarterly net profit came in lower than its dividend commitment in the fourth quarter. Over the year as a whole, the $4.08 per ADS that Shell made in net income just about covers its dividend obligation with a tiny amount of change left over.

The cashflow picture looks a bit better. Shell generated around $47,000m last year from all of its business lines (excluding $5,000m in negative working capital movements). After spending just under $24,000m on cash capital expenditures, the company retained around $18,000m in surplus cash. Of that figure, the annual dividend took up just over $15,000m. The company also spent a further $10,000m on stock buybacks last year as part of its wider $25,000m buyback plan.

When you process all of those numbers, you should arrive at the conclusion that Shell cannot afford to self fund its current rate of dividend spending and large scale share repurchases. It can do one or the other in the current macro environment. Obviously this excludes taking on more debt, or even including receipts from the sale of assets. Shell expects to raise $10,000m from the latter by the end of 2020.

I’ve mentioned this previously but the $25,000m buyback program that Shell announced in 2018 makes financial sense for two reasons. (It also plans to return circa $125,000m via additional buybacks and dividend repayments in the 2021 to 2025 period). Firstly, Shell diluted its shareholders when it completed on the BG Group deal back in 2016. That is because it paid part of purchase price with freshly minted stock. Secondly, the company cancelled its scrip dividend program at the end of 2017. (That is the process of paying dividends with freshly minted shares in lieu of cash). As a result of both of these points, the annual cash dividend bill has gone through the roof in recent years. 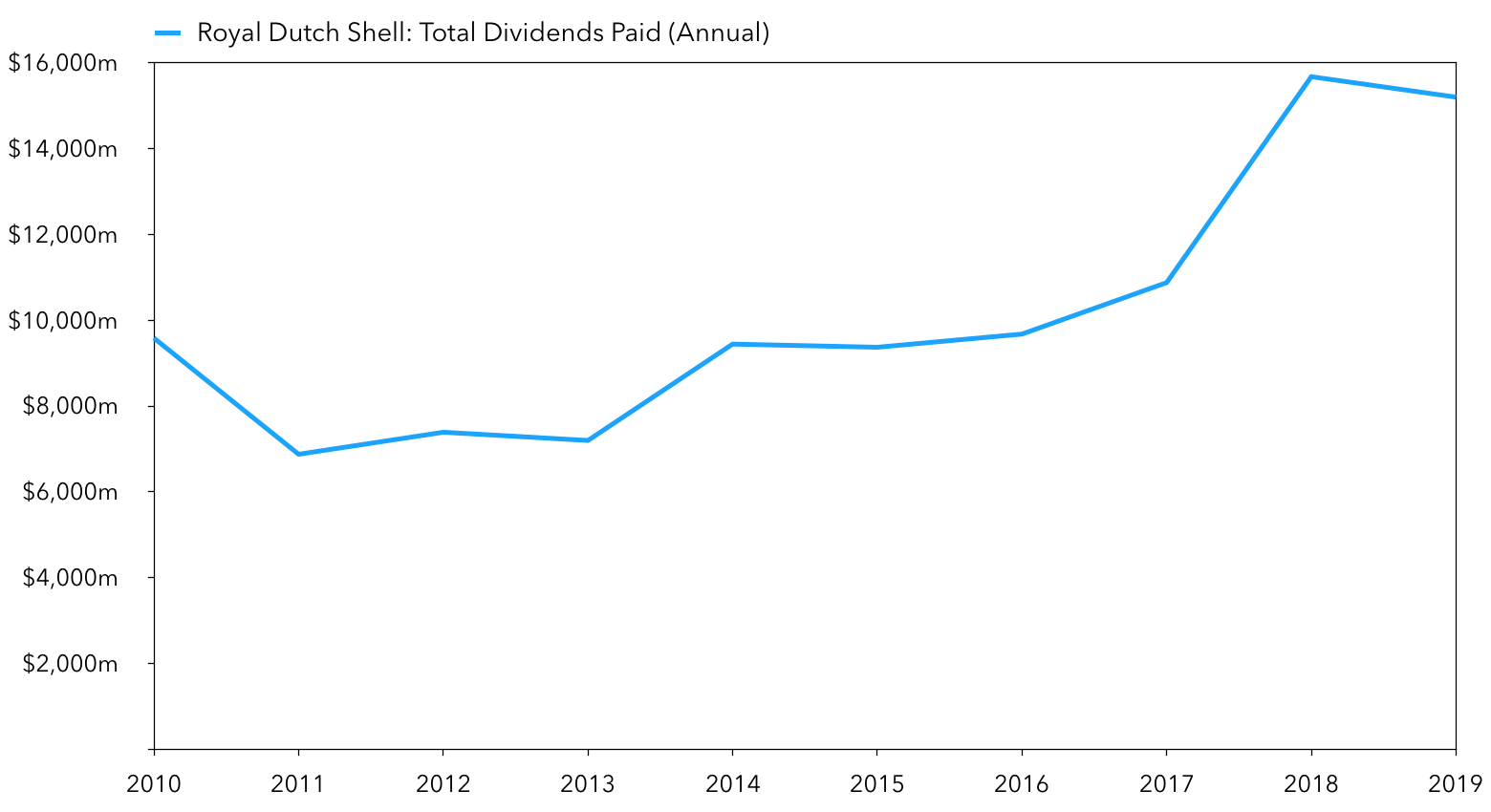 At its current stock price, every $1,000m spent on share repurchases reduces the annual dividend bill by circa $70m. That saved cash then represents a recurring source of retained profit for Shell to use as it sees fit. It could even decide to increase the per-share dividend via buybacks, thereby growing the income stream without actually spending more cash.

Unfortunately, this relies on commodity prices and trading conditions playing ball. Shell realized a liquids price of $57.76 per barrel last year, down around 10% on the $63.85 per barrel it realized over the course of 2018. (Bear in mind that many of its gas sales contracts are also linked to the price of oil). Furthermore, its Downstream operations haven’t picked up the slack, primarily due to poor macro conditions. Shell made $15,200m last year through refining, chemicals and so on. That was around $2,400m lower compared to 2018.

So far, I calculate that Shell has spent around 60% of the $25,000m earmarked for the stock buyback program. If the company is to complete it on schedule then that means spending another $10,000m on share repurchases in 2020. Add that to $15,000m annual dividend bill, and we would potentially be looking at another $25,000m in total 2020 shareholder returns. Just to put that figure into some context, it represents over 10% of the company’s current market capitalization.

Now, Shell also plans to spend around $24,000m on CapEx this year according to management guidance. If it is to self-fund its shareholder return plan, it would need to generate almost $50,000m in cash from operations over fiscal 2020. (Bear in mind it will also raise some money from the sale of non-core assets). Given macro conditions and Shell’s level of gearing it would not surprise me to see the buyback program delayed somewhat, but let’s see.

Shell ADSs trade for just under $54.50 apiece as I type. If math is correct that puts the stock at 13x last year’s profit with a prospective dividend yield of 6.9% based on a $3.76 annual distribution. Call me crazy but I think that is a fair deal. I mean in the current oil price environment the dividend is pretty secure. In a $60-plus oil environment, the stock starts to throw off significant levels of excess cash again. If you share my view that a $65/bbl oil price represents a reasonable long-term forward average estimate then it seems more than possible that Shell could deliver at least high single-digit annual shareholder returns.