written by The Compound Investor November 23, 2019

Like a lot of folks I enjoy owning Procter & Gamble (PG) stock because it epitomizes Peter Lynch’s ‘buy what you know’. Off the top of my head I can think of a bunch of the company’s brands that between them make up a sizable chunk of our shopping bill. In fact I doubt there has been more than a two-week stretch in which we didn’t need to buy the likes of Head & Shoulders, Fairy Liquid, Olay and Gillette razor blades. Put a gun to my head and force me to choose one of my twenty dividend stocks that will definitely be around in forty years time and I probably plump for Procter.

The best part of those recurring sales? They attract a net profit margin approaching 20%. Now, in one year that would be impressive in its own right. But Procter does this year in, year out. It does this when the economy is booming, and when it is in the doldrums. As a result the company is in position to constantly shower its shareholders with cash. Procter has now racked up 129 years of consecutive dividends and 63 years of consecutive annual dividend growth. It has also spent around $100,000m on stock buybacks in its history. (Some criticize the company for this but I only mention it to illustrate how much discretionary cash it generates).

By my count, the company has generated around $18,500m in post-dividend free cash flow over the past five years. Bear in mind, this was a period which many folks would characterize as a poor one for Procter. Assuming a similar performance over the next five years, the company would generate enough surplus cash to reduce its current net debt balance to zero. (It could also retire ~1% of the float per annum at its current share price if it spent the sum on share repurchases). As far I’m concerned any defensive stock that throws off that kind of firepower in a bad spell is worth a look.

Regular Procter & Gamble followers on Seeking Alpha will know the company has copped a fair bit of criticism in recent years because growth has been anaemic. If you look at the last six decades’ worth of dividend data (i.e. covering 1959 to 2019), you will find that the most recent one saw the lowest annual average growth. I see that as a rough indication that sales and profit growth has also come in relatively low in recent years.

The explanation for that is a probably a bit of a mixed bag. First, it does face some secular headwinds in terms of competition from store-owned brands and the changing advertising landscape. In terms of the latter, online advertising is a different ball game to the old linear-TV domination previously enjoyed by the likes Procter & Gamble. For a company that spends ~$7,000m on advertising each year that is probably a legitimate concern.

In terms of the hard figures these are what concern me as a stockholder. First, and this corresponds to the past five years, average annual organic volume growth (i.e. excluding divestments/acquisitions) clocked in at just 0.8%. The annual contribution from price increases over that period averaged just 0.6%. In other words the company has both struggled to shift more goods and raise prices to offset this.

That said, these issues have a way of getting way overblown. More recently, foreign currency fluctuations have wreaked havoc on the dollar denominated top and bottom line. For instance, in Procter’s fiscal 2019 the strong dollar knocked a whole 8% off underlying core earnings per share. Back in the 2014-2016 period the situation was even worse. Any analysis that highlights the lack of growth recently has to take this into account.

The good news is that recent results have been better. In its fiscal first quarter covering the three months ended September 30th (remember P&G financials run from June to June) the company reported organic volume growth of 4%. Organic sales were up 7% excluding a two percentage point hit from foreign currency movements and the impact of divestments/acquisitions.

The million dollar question: What will Procter & Gamble stock do for me going forward? Last year (i.e. its fiscal 2019, ended June) the company posted core earnings per share of $4.52. The current share price is around the $120 mark, or roughly 26.5x that number. The current annualized dividend – around $2.90 per share – represents a yield of 2.5% as things stand. 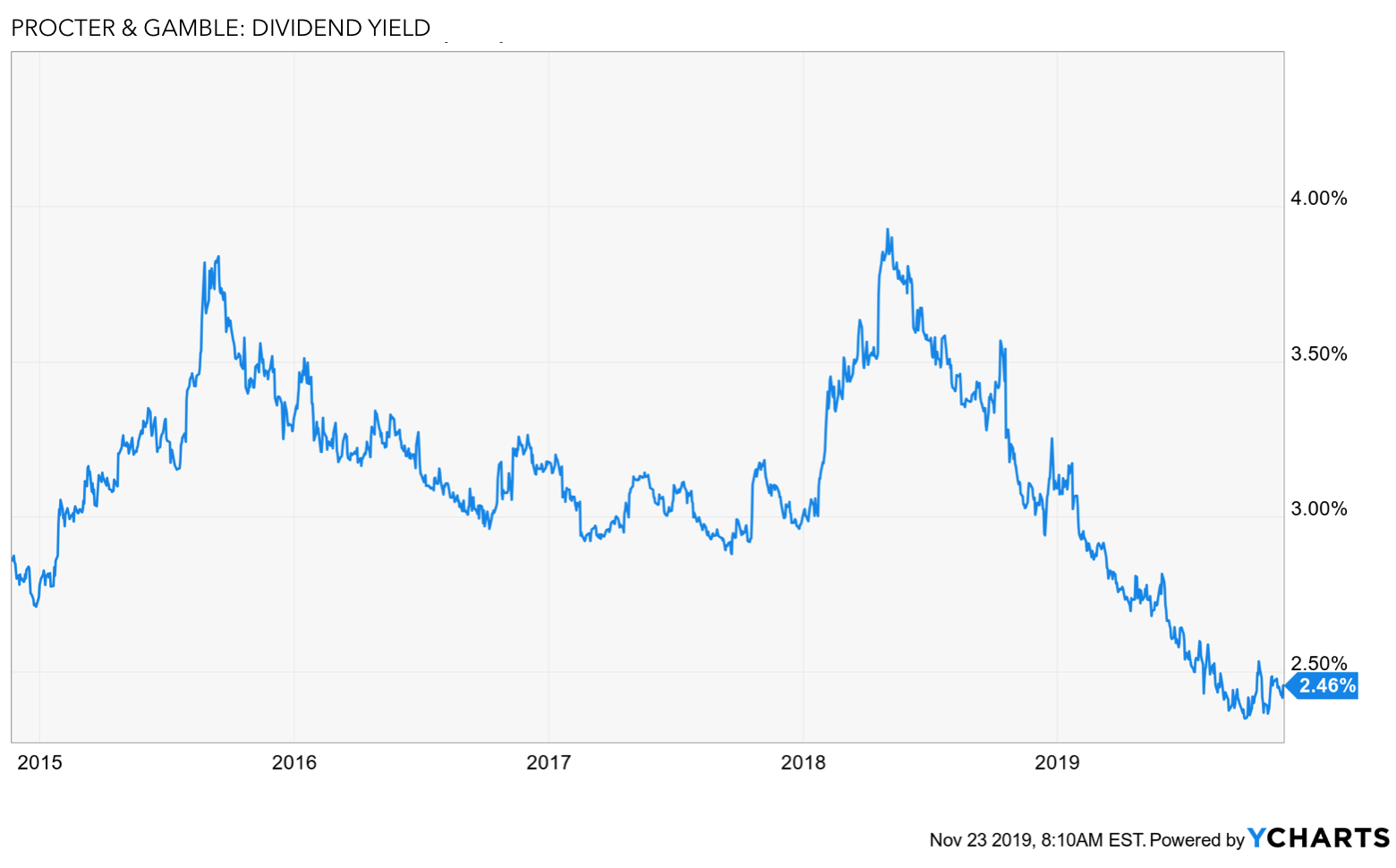 Where does that leave us? Well, management’s long-term target is for “mid-to-high single-digit” core earnings per share growth. On top of a 2.5% dividend yield that implies average annual returns of somewhere in the 8% to 10% range absent changes to the valuation multiple. That last part is obviously the kicker. A 26.5x earnings multiple is a problem unless management’s long-term goal proves too conservative. Averaged over a suitably long time frame, I’d expect that to amount to a headwind of around 2% per annum. If your goal is to compound wealth at a double-digit clip then this is not the time to be making a big lump-sum commitment to Procter & Gamble stock.

Disclosure: I own shares of Procter & Gamble via the company sponsored dividend reinvestment program.