By now most readers will be very familiar with the profiles of our typical ‘dividend millionaires‘. Almost without exception they had a few things in common. First, they lived very long lives. Indeed the majority profiled so far were nonagenarians, with a couple possibly making it past the big one-hundred. Second, they typically remained unmarried and childless. Finally, they lived modest and fugal lives – often to an absurd degree.

The latest edition – the story of Phyllis A. Stone – ticks most of those boxes. For one, Stone was 91 years of age when she passed away in early-2013. She had never married and had no immediate family. From her Chevy Cavalier and modest home in Albany, New York you would never have guessed her true net worth, which ran north of six million dollars when she died.

What I like most about Stone’s story is its simplicity. Judging by reports it seems that most of her net worth was tied up in Exxon Mobil (XOM) stock, a result of the late-1990s merger between the two oil giants. Prior to her retirement, Stone had worked in Mobil Oil Corporation’s real estate department in Albany for over thirty years.

Time In The Market

The fact that a large chunk of Phyllis Stone’s estate was comprised of Exxon Mobil stock provides an interesting case study. When Mobil merged with Exxon the stock price was roughly $35 or so. Stone was described as possessing “tens of thousands” of shares of the stock when she died. It looks like she reinvested most of her dividend income along the way too.

Using that information, plus a little guesswork, it seems likely that her Exxon Mobil pot was probably worth a couple million dollars by the late-1990s. Now, between that point and when she passed away Exxon’s stock price increased from $35 to around $85, or more than double. Great, but the kicker is that Phyllis Stone was already around 77 years old at the time of the merger. The fact that she managed to live another fourteen years was, ultimately, worth millions of dollars to her. If she had passed away in her late-70s, we may never have heard her story. (That said her estate would still have been a worth a few million dollars, which is still very impressive!).

The dividend income situation is equally extraordinary. Exxon was paying quarterly dividends worth around 21¢ per share in 1999 (after adjusting for subsequent stock splits). Given the size of Stone’s stake at the time, it is likely that the company was cutting her a check for over $12,000 every single quarter. That is the equivalent around $18,500 in quarterly income today after adjusting for inflation.

Pretty impressive, but it gets better. Thanks to dividend reinvestment, Stone basically got a double whammy in terms of income growth. First, Exxon spent the next fourteen years using its free cash flow to annihilate the share count. I have Exxon Mobil retiring somewhere in the region of 2,500m shares between year-end 1999 and the start of 2013, equivalent to around 35% of the initial outstanding total. Those share repurchases ultimately contributed to total per-share dividend growth of 8% per annum, on average, during that period. 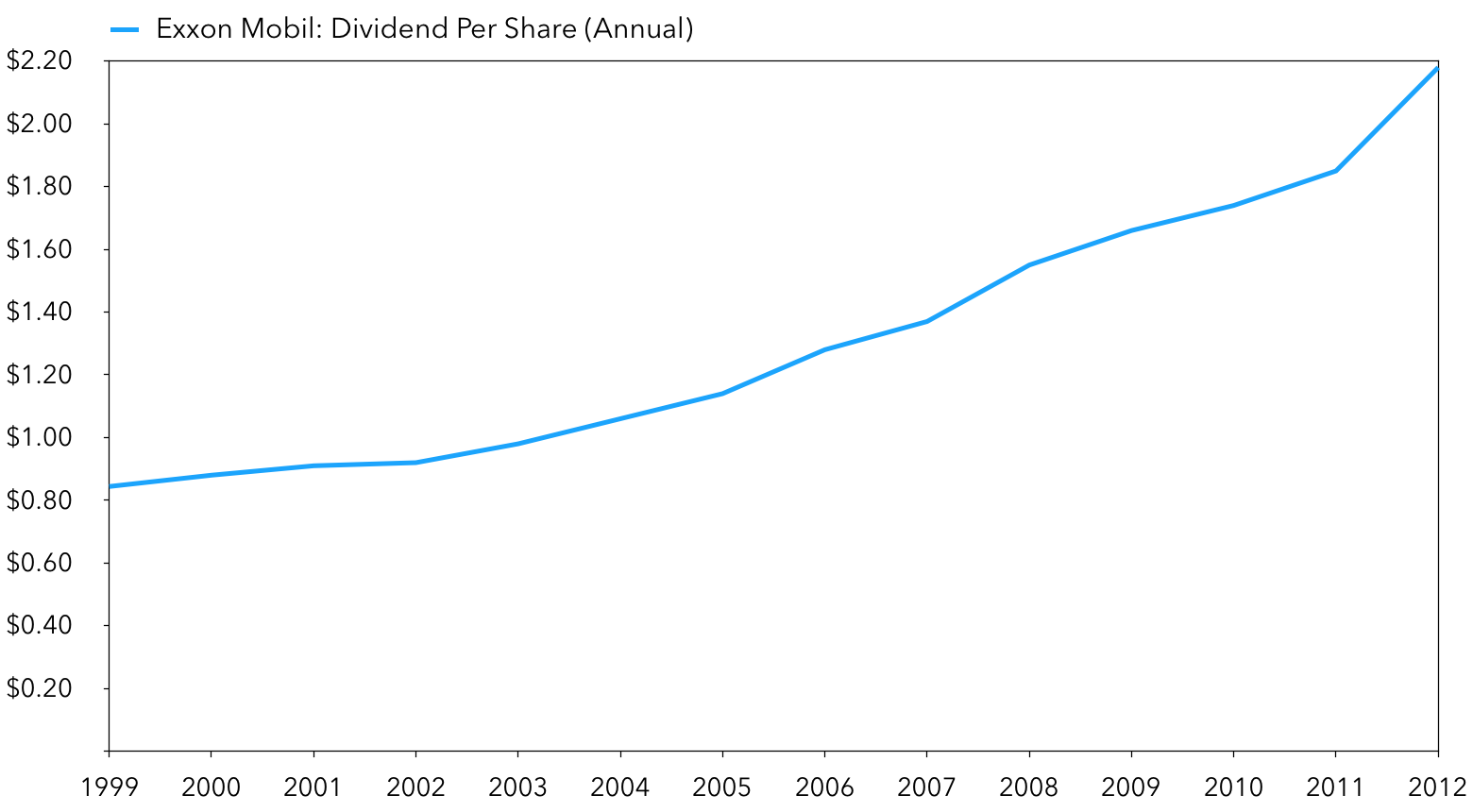 In addition, Stone was writing her own growth by reinvesting dividends at a rate of around 2.5% per year on average. Or put another way, Stone was compounding her Exxon income stream at a double-digit annual clip. Just to reiterate, that was around $12,000 in starting income every three months growing at circa 10.5% per year.

If you run the math on that it seems possible that her Exxon income could have quadrupled between 1999 and 2013. It depends to a large extent on how much she actually reinvested, and where she reinvested (she owned other stocks and bonds according to reports). At a minimum it tripled. It seems possible that she was collecting anywhere between $40,000 and $50,000 from Exxon Mobil each quarter by the time she passed away.

As amazing as that is let’s not just concentrate on the last fourteen years. Granted, it is where the compounding ‘magic’ happened, but the road to get there was long. For instance, imagine being in a position to construct a $1,000 annual income stream from stock investments at age 20. Assuming 7% per annum real growth that income stream would be worth around $27,000 by age 70. If you delay the start point to age 30 – i.e. by just one decade – the ending amount drops in half to around $14,000. Of course most folks don’t deal in one-off lump sums. They will save as they earn. But the point still stands: the longer you can be invested, the better.

Catching Up With The St. Agnes Stock Portfolio (2019)