At the end of the third quarter of 2019 the cumulative retained earnings of PepsiCo (PEP) stood at just over $61,500m. What the heck does that mean, I hear you say. Well, put another way, even after paying out what must amount to tens of billions of dollars in cash dividends over the years, PepsiCo has still managed to net itself over $60,000m in excess profits during the course of its lifetime. Not too shabby.

I mention this point in relation to fears regarding the future of soda firms in an increasingly ‘anti-sugar’ era. Indeed, just check out what has been happening with the company’s domestic beverage operations in recent years. In the sprawling web that is PepsiCo’s global snack and beverage empire, the North American beverage unit represents the historical source. That is where the show began. From that came the profits to acquire the likes of Taco Bell, Walkers, Tropicana, KFC, Pizza Hut and Quaker Oats. (The restaurants have long since been spun off, generating even more riches for PepsiCo shareholders).

Something I find interesting about the North America beverage unit is that it hasn’t grown much in recent years. For instance, between 2014 and 2018 the mean annual volume growth clocked in at just 0.1%. It seems that folks in North America barely consume more Pepsi, Gatorade and Mountain Dew than they did a few years ago.

Bear in mind that figure encompasses the entirety of PepsiCo’s beverage range in North America, not just sodas. The situation is worse if you restrict it to the carbonated soft drinks (CSDs) like Pepsi and Diet Pepsi. The company saw CSD sales decline by an average of around 2.5% per year between 2014 and 2018.

So far, the company has managed to stem this decline because regular price hikes have contributed net revenue growth of circa 2% per annum on average. All-in-all, the upshot is a situation in which annual revenue for the segment has been essentially static around the $20,500m mark. Operating profit has also kind of bobbed around in the $2,250m to $2,750m per annum range.

Unsurprisingly, this trend has caused some consternation among financial media commentators. Although soda volumes in North America may have slumped, take a look at what the overall business managed to do over the same time frame. Core earnings per share of $4.63 in 2014 increased by over 20% to $5.66 by the end of fiscal 2018. The annual cash dividend grew from $2.53 per share to $3.59 per share over the same timeframe. 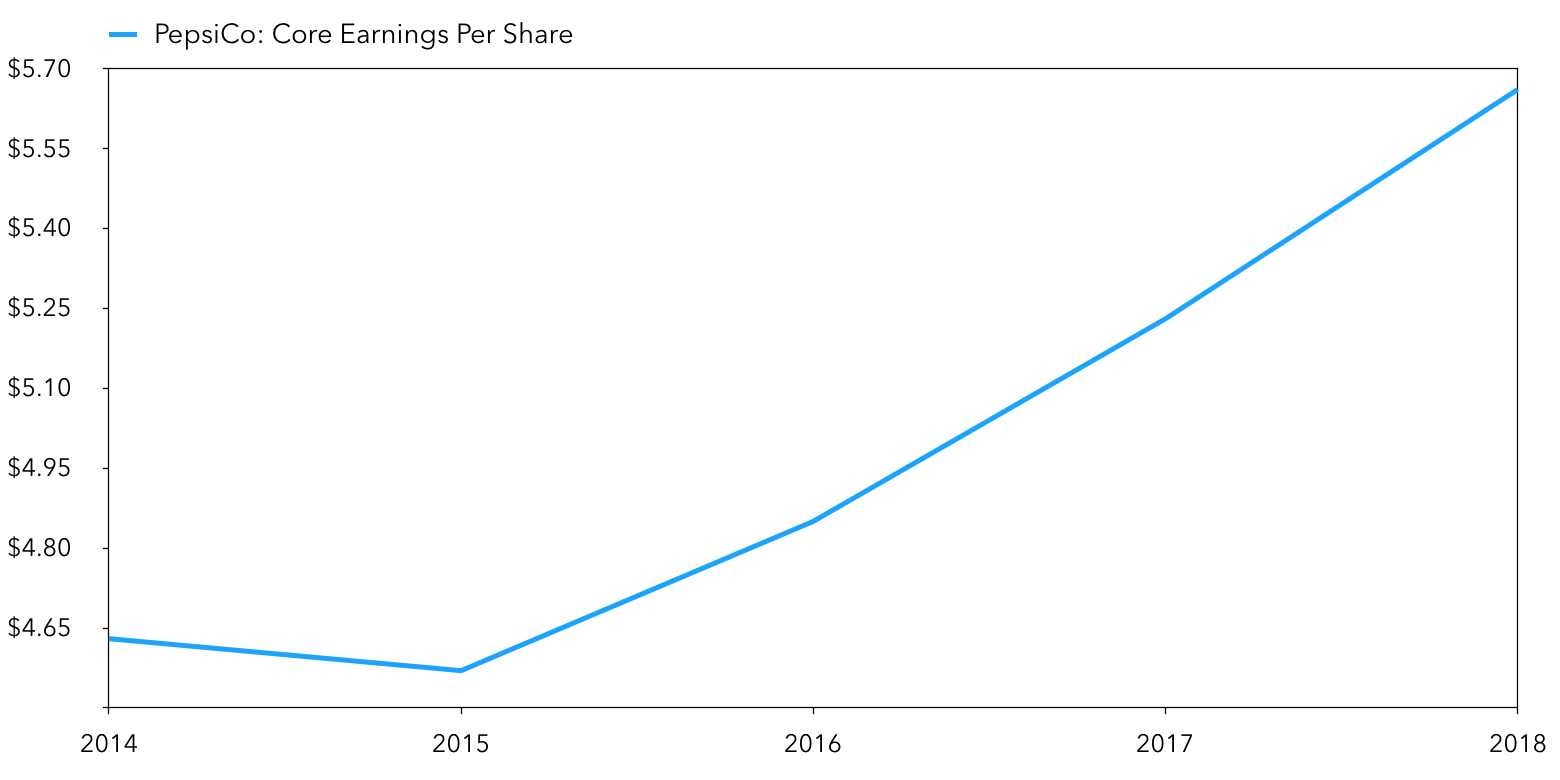 In fact, the profit figures are probably understated due to significant adverse foreign exchange effects over the past five years. Strip those out, and you find the underlying business has hummed along nicely, posting circa 9% annual underlying earnings per share growth along the way.

My own view is that the retained earnings figure is the one to watch. At the start of 2014 PepsiCo had racked up $49,000m in retained earnings over the course of its corporate life. As mentioned right at the top of the piece, that figure now stands at just over $60,000m. It will rise further when PepsiCo reports its FY19 earnings at the end of the month.

If you are somebody who is concerned that PepsiCo’s core business faces secular headwinds, then that should give you comfort. I say that because the post-dividend retained profit represents the source of funds for international expansion, business acquisitions, stock buybacks and so on.

PepsiCo’s current annual earnings power is somewhere in the $8,000m region as things stand. The dividend takes up around $5,250m of that based on 1,394m shares outstanding. That means circa $225,000,000 worth of excess profit is flowing into PepsiCo coffers every month. When company executives talk about high single-digit earnings-per-share growth, that is where the engine is. My guess is we will continue to see long-term compounding in the 10% per annum range as a result.

Coca-Cola: Not Done Yet