I note that PepsiCo (PEP) released quarterly results earlier this week. COVID-19 aside, the snack and beverage giant looks in great shape. We shall get to the virus later, but for now let’s appreciate the numbers the company put out last quarter. Revenue came in 7.7% higher than in 1Q19, or 7.9% on an organic basis (i.e. after stripping out currency issues and the like). Pretty much every geographic area and business line (snacks and drinks) saw growth.

Anyway, core earnings per share came in at $1.07 for the quarter. That represents 10% growth on the figure reported a year ago. The company has pulled its 2020 guidance in light of the coronavirus, though it still expects to spend $7,500m on shareholder returns this year. The lion’s share of that figure will go on cash dividends, with a couple billion left over for share buybacks as well.

Now, I imagine the COVID-19 situation played a small part in last quarter’s results. I don’t know about you, but our cupboards are loaded with PepsiCo products – Doritos, Quavers and Walkers being the most obvious ones I can think of. That said, I’m not sure the positive impact of stockpiling has had that much of an effect. I think management mentioned that the stockpiling tailwind only showed up in the last few weeks of the quarter. Or put another way, its quarterly numbers are good figures in their own right.

As mentioned above, guidance for this year has been pulled in light of the current situation. I don’t care much about that for one simple reason: the Fed. Well, I say the Fed, but the monetary response has been global. I read some pretty angry pieces and comments on Seeking Alpha bemoaning this and the current state of the stock market. How can these names go for 20x earnings, sometimes more, faced with such nightmarish conditions?

Fair enough, but it is still stocks for the long run based on those valuations. When PepsiCo plunged back in March, along with everything else, it went down to the one-hundred bucks per share area. That put the stock at a shade under 19x earnings, with that valuation based on last year’s net profit.

Now, earnings may well take a hit this year, but that has been true in every downturn. The best time to buy has rarely presented itself as a low P/E ratio based on current profit. We have to look a bit further out than that. On that basis, we have a circa 5% earnings yield (even if it is based on 2021 earnings) for PepsiCo stock, versus current corporate bond yields. The current spread favors the former all day long.

Actually, there’s another reason I don’t much care about COVID here: it strikes me that PepsiCo will recover relatively quickly in any case. The quirks of this crisis, the lockdowns and such, are obviously public health related. It seems likely that this will resolve itself in the near future, and by that I mean a small number of quarters. Even if we are then left with a sluggish economy, well, PepsiCo has never been too dependent on that anyway. 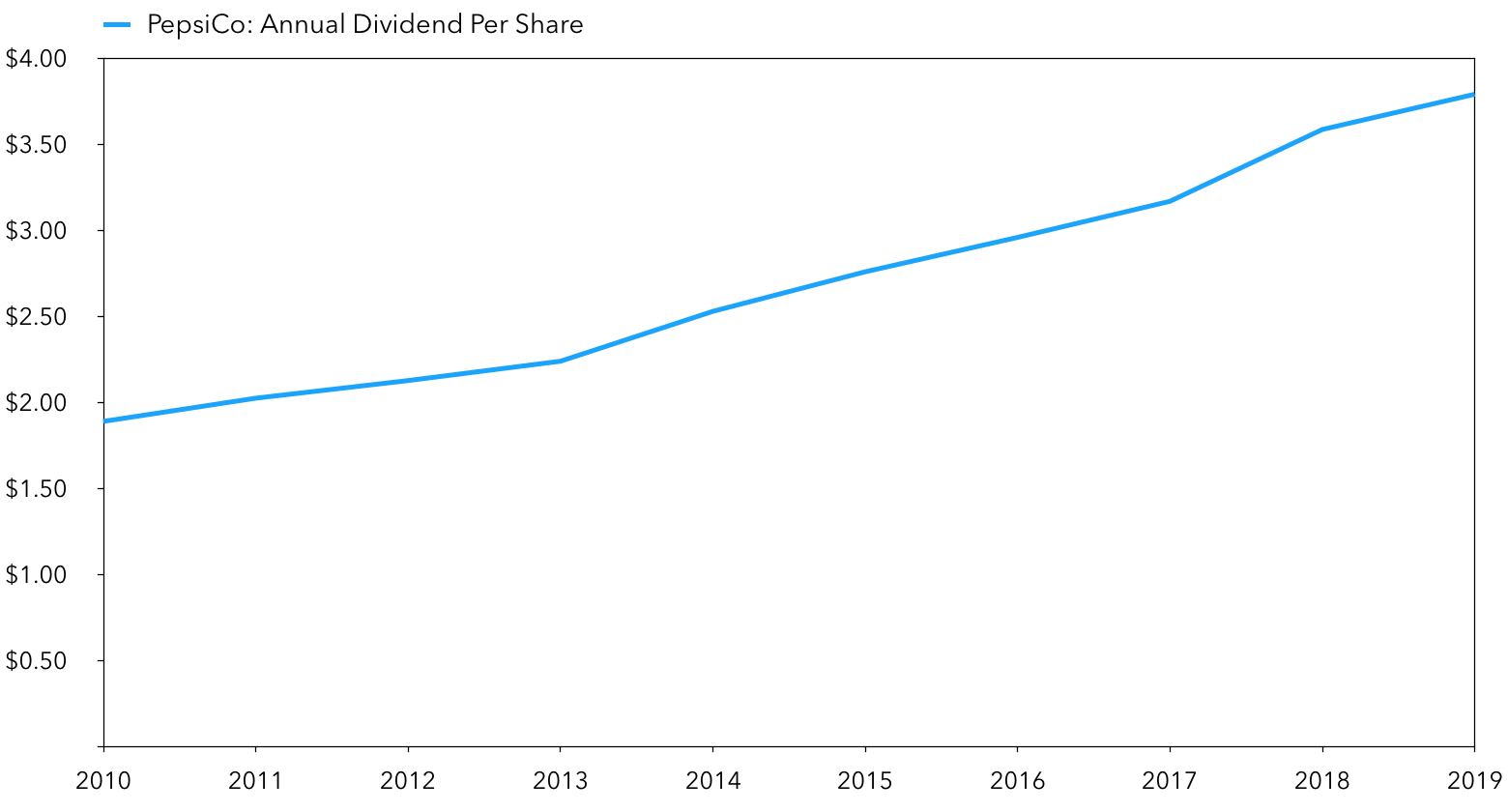 Right now, the shares change hand for around $132 apiece. I make that equivalent to a dividend yield of 2.9% based on an annualized distribution of $3.82 per share. COVID-19 aside, its business looks like it is humming along quite nicely in terms of growth. PepsiCo claims that the $5,500m it will spend on shareholder dividends this year represents a 7% increase on last year. Once things return to normal, that means it would still retain $3,000m or so in annual profit for other purposes.

Let’s say the company carries on in much the same vein as it has recently. That mean’s circa 7% dividend growth, with PepsiCo using its retained earnings to fuel growth in the future. On that basis, you might reasonably expect the stock to pay out somewhere in the region of $55 per share by way of cash dividends over the next decade. At a $132 per share stock price, that is an okay deal given the current interest rate environment.

Exxon Mobil: How Not To View This Crisis