So, we can add Molson Coors (TAP) to the list of companies forced to cut their dividends. The brewer announced it was suspending 2020 distributions on its two classes of common shares last week. The shares remain beat up, and currently sit less than 10% above their March lows. In contrast, the S&P 500 is now around 35% above its 1Q20 low point.

Now, regular readers will know I have been bullish on Molson for some time know. Principally, that outlook revolved around debt reduction following its buyout of the MillerCoors joint venture. That deal saw it consolidate its position in the stodgy US beer market, though net debt ballooned to circa $11,500m at the end of FY16. At the time, that figure was worth somewhere in the region of 4.5x annual EBITDA.

We have obviously had a bit of a mixed bag here since then (and that’s putting it kindly). On the down side, the firm has struggled operationally due to declining beer volumes and stagnating sales. On the plus side, it is generally a money spinner that throws off plenty of cash. I have cumulative free cash flow at $4,250m between FY17 and FY19. It paid out circa $1,100m by way of cash dividends in that time, leaving plenty left over for debt reduction. Indeed, net debt fell by the implied $3,000m between the start of FY17 and the end of FY19.

The COVID-19 pandemic obviously makes things slightly more complicated, at least in the short-term. When I last covered the stock in March, I made the claim that Molson represented a solid defensive play. I based that statement on the fact that 70% of its sales come from the United States, where the impact of lockdowns on beer sales should be less of an issue for the company. I also claimed that folks could enjoy a 5.4% dividend yield, comfortably covered by underlying cash profit. Those statements don’t look so clever right now, though I remain bullish at the current share price.

Since that piece, the company has released financial results covering its fiscal first quarter. The numbers were pretty ugly, with revenue down 8.7% and EBITDA down 17%. In constant currency terms, those figures improve slightly to 8.2% and 15.8% respectively. Global brand volume clocked in at 17.865 million hectoliters, down 1.8% on the equivalent period last year.

Quite a lot is obviously going on within those figures. In the United States, the company suffered a tragic shooting at its Milwaukee brewery toward the end of February. Management stated it had a material impact on sales to wholesalers in late-February and early-March. Over In Europe, COVID-19 lockdowns hurt its on-trade business, which accounts for circa 50% of net sales in the region. In the UK, its most profitable European business, on-trade is more like 75% of net revenue. In the United States, which represents 70% of Molson’s total business by net sales, less than 20% of net revenue comes from on-trade.

The good news is that off-trade is indeed picking up some of the slack from on-trade. Folks that can’t buy a beer in a pub can still buy one in a grocery store. The bad news is that it is not enough to offset the overall disruption. That means this quarter probably represents the really ugly one, given it shoulders the full brunt of the lockdowns, but things should pick up after that.

Anyway, let’s get back to the dividend cut. The pressing situation is that its debt hovers precipitously above junk rating, and a big slug of it due over the next couple of years. It is currently rated BBB-/Baa3, with management determined to maintain investment-grade credit. It didn’t really have much of a choice there.

I was too blasé about the debt situation in the last article (though I stand by the value case). Liquidity isn’t great, even though the company generates enough cash to deal with its debt in normal operating conditions. It still has $900m undrawn on its revolving credit facility as per the most recent 10-Q, but $2,000m of debt is due before the end of FY21.

Now, the company already paid its first quarter dividend prior to the cut, so the dividend suspension saves it around $370m over the rest of the year. It also announced $200m of capital spending cuts as well, so that’s around $570m in saved cash outflow this year. That means only $275m or so is headed out the door over the rest of the year, while it also expects $150m to come in from the sale of its Irwindale brewery to Pabst Brewing.

The stock is cheap in my view. In a vaguely normal world, Molson would make around $1,000m in annual profit with excellent cash conversion. Though some patience will be required over the next few quarters, I don’t see why this can’t be a solid value pick over the next few years.

To put some numbers on that statement let’s look at a potential recovery here. By my count, Molson has $3,500m worth of debt due prior to FY25. If FY20 EBITDA suffers a 50% drop, I think Molson will essentially breakeven on the cashflow front this year. I base that statement on pre-COVID-19 estimated EBITDA of $2,100m, and $775m of combined interest expense and capital spending. (This isn’t a prediction, more of a ‘what if’).

After that, I don’t think it’s a stretch to assume it could generate $3,500m in cumulative free cash flow over the period in question. I’ll just assume it pays down debt with that, so no shareholder dividends. This is not realistic as I expect the firm to resume distributions with some refinancing of debt, but bear with me. Anyway, that scenario would see net debt fall to under $5,500m at period-end. If it returns to being a $2,100m annual EBIDTA business by then – which was its initial FY20 forecast – then it sports a net debt-to-EBITDA ratio of 2.6. Much healthier. 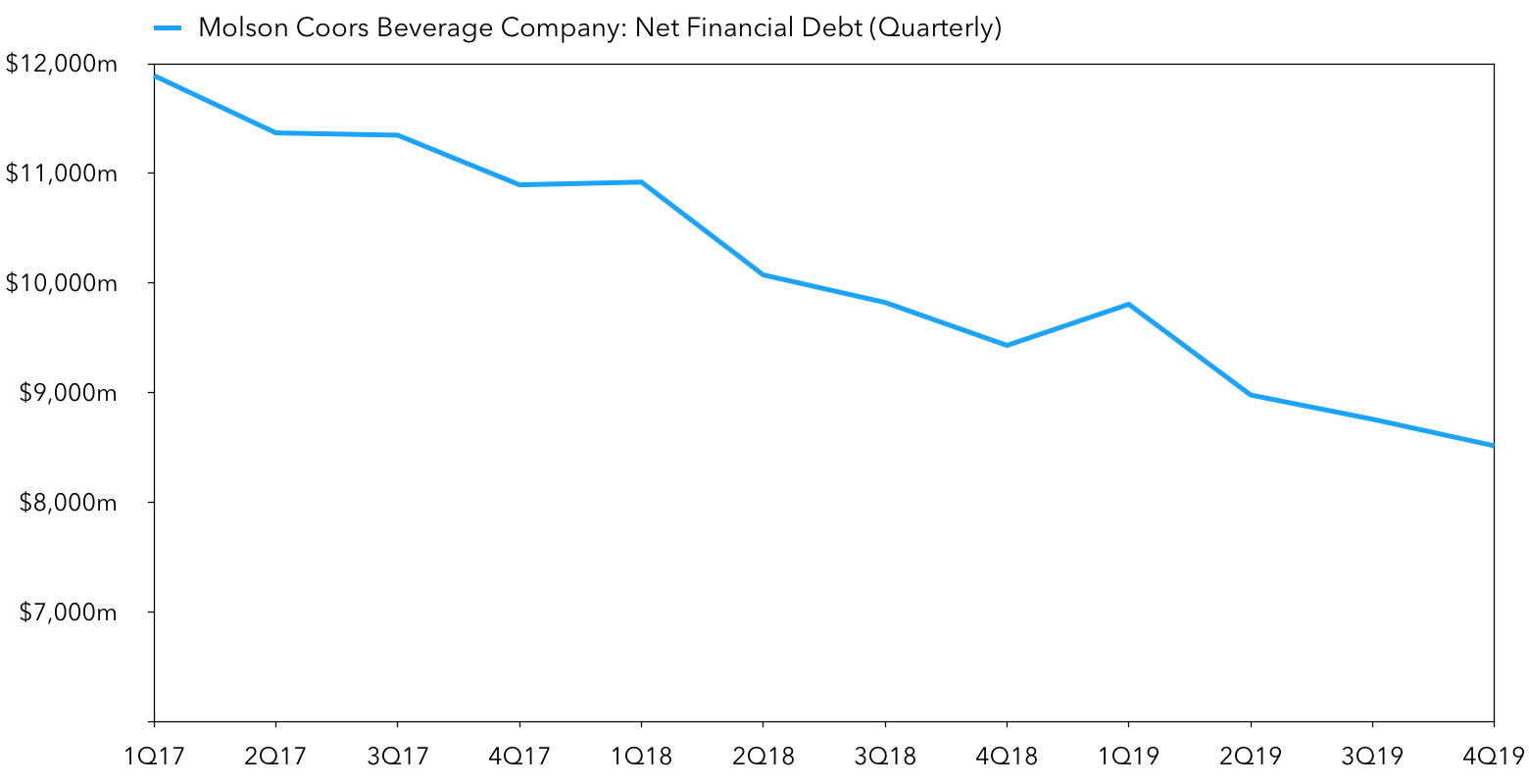 Anyway, let’s assume Molson trades at 9x its EBITDA, which works out to an enterprise value of $19,000m. Subtracting $5,500m of net debt leaves $13,500m for the equity. With 217m shares outstanding, I make that equivalent to a share price of over $60. Quick math suggests comfortable double-digit annual returns from the current $38 stock price.

Note that the thrust of the argument doesn’t change if we assume Molson elects to resume dividend payments. Let’s assume a rapid rebound in FY21, and a resumption of its previous level of dividend spending. That works out to circa $9 per share in cumulative dividend cash through FY24. Deleveraging would be slower in this case, with net debt only falling to $7,500m by the start of FY25. Based on the above assumptions regarding EBITDA and so on, I have the terminal stock price at around $53. Throw in dividend cash, and you end up in the same place.