Whilst skimming through Christopher Mayer’s book – 100 Baggers: The Stocks That Return 100-to-1 And How To Find Them – I was pleasantly surprised to see that the case of Ronald Read got a pretty big mention. For those who haven’t heard of Read’s story, he was another high profile example of a ‘secret’ buy-and-hold millionaire.

As far as I can tell, the original story cropped up in a Wall Street article by Ann Prior – The Frugal Man Who Left An $8m Estate. It’s a pretty awesome tale full of neat little tidbits that will naturally appeal to long-term investors. The best thing about it? The utter simplicity of his strategy. Here’s a guy that spent his life as a janitor and gas station attendant in Vermont. This is pretty much the polar opposite to most people’s idea of a route to significant wealth creation.

This is the beauty of Ronald Read’s case. Whether he was aware of it or not, he was deliberately saving in exceedingly high quality output. The article describes him as being a good stock picker but this is a really simplistic treatment.

Consider his portfolio, which at the time of his death contained a total of 95 stocks. The largest positions included $510,900 worth of Wells Fargo stock; $364,008 worth of Procter & Gamble stock; $252,104 worth of Colgate-Palmolive stock; $199,034 worth of American Express stock; $189,722 worth of J.M. Smucker stock; and $183,881 worth of Johnson & Johnson stock. His portfolio also contained large positions in stalwarts such as Dow Chemicals and General Electric.

To you and me, that just looks like regular blue chip dividend investing. It’s not like these companies didn’t already have illustrious histories even when Ronald was acquiring them in his heyday. By working backwards from his age and date of death, we can deduce that Read was born in 1923. Let’s say he makes his first stock investment in 1941 at the age of 18 (this is entirely hypothetical on my part). 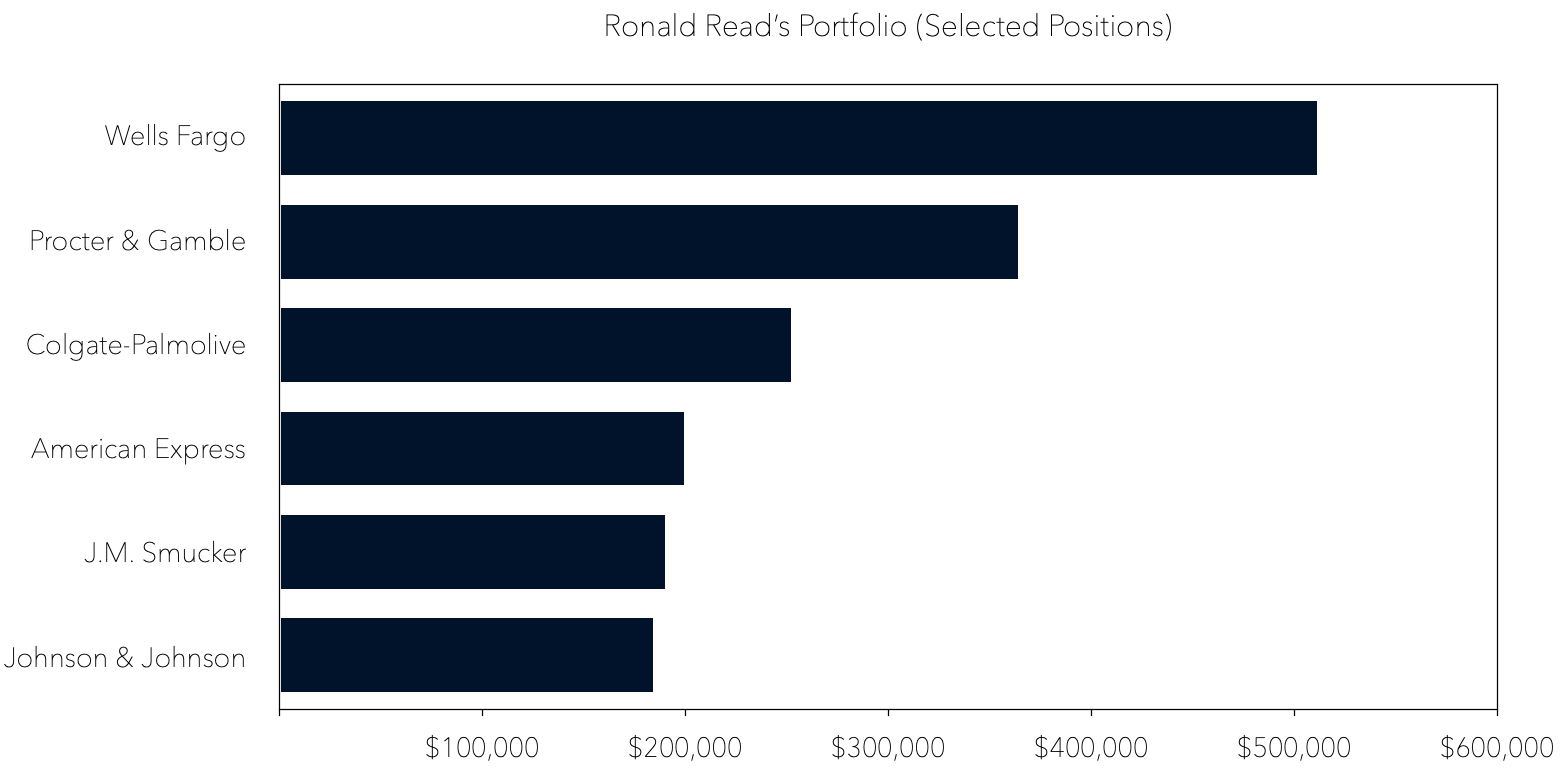 Procter & Gamble had already paid a dividend for fifty straight years at that point. Colgate-Palmolive had been doing so for 46 years, surely qualifying it is a stodgy blue chip stock and not requiring much “stock picking” ability. In fact, the only evidence of any kind of stock picking process appears to be that he was familiar with the businesses and that they also had a habit of paying dividends to shareholders. That’s it.

The portfolio contained its share of losers – including total zeroes such as Lehman Brothers. That didn’t matter though, because within Read’s treasure chest (which contained a grand total of 328 stock ownership certificates) there were more than enough winners to make up for the big losers. Even in the cases that ended up like Lehman Brothers, it is likely that he collected a significant sum of dividend cash before they went bust. Not only does that make the losses look better, but that cash funded other positions that carried on compounding.

If his $8m stock portfolio had an average dividend yield of just 2%, then it would have been throwing off over $13,000 a month in dividend cash. Not bad for a man who worked as a janitor, maintenance man and gas service attendant!

Suffice to say, this a long game. I mean, a spare $1,000 in Coca-Cola stock only gets you about $33 in dividend cash this year. That’s not even enough for a single share if you wanted to reinvest it. No, this approach only starts to pay off big time years down the line. The more you save and the earlier you start can obviously speed up the process.

Granted, this particular case represents a pretty extreme example of frugality. A big element of that just comes down to individual life choices. Striking a balance between spending and saving is a matter of judgement and personal taste more than anything else. I imagine there are relatively few folks who have the proclivity to carry on saving right up to the end like Read did.

That said, there are doctors and lawyers in Read’s peer group who will have died with only a fraction of his wealth having earned significantly more than he ever could. What he lacked in earnings power, he made up for by allocating his savings to some of the highest quality businesses on the planet. Overall, it is a brilliant example of compounding in action.