Early on Wednesday McDonald’s Corporation (MCD) released financial results covering the fourth quarter of 2019 (“4Q19”). Among the headline results were the following. First, the company sold over $100,000m worth of food and drink last year across its global empire. I make that the equivalent of around $2.65m per restaurant on average based on 38,695 restaurants worldwide. That is big. I mean just compare that to, say, Wendy’s (which I covered a few days ago). In 2018 the Ohio-based burger chain generated around $10,500m in annual systemwide sales, roughly equivalent to $1.55m per restaurant.

Second, growth is still coming in strong. The company posted comparable sales growth of just under 6% in 4Q19 – the highest in a decade. Total systemwide sales were up 6% in US dollar terms, and 7% after accounting for foreign exchange movements. Normalized operating income increased by 7% in US dollar terms and 9% in constant currencies. So far, so good.

The third point: shareholder returns. Last year, and as the final part of a wider $25,000m three-year shareholder return program, McDonald’s returned $8,600m to its stockholders via dividends and share repurchases. The company generated just over $13,600m in cumulative free cash flow over the same three-year timeframe (of which roughly $5,700m came last year). I’m sure I don’t need to remind anyone where the difference came from.

More On The Debt Load

Those large scale returns, funded by debt, have caused a fair amount of consternation among a number of commentators. Indeed I’ve written more than my fair share of cautious pieces about McDonald’s here on The Compound Investor. I even read one piece recently that sounded the alarm bells over the fact that, technically at least, the company now has a negative book value. Or put another way, because it has taken on so much debt the company’s liabilities outnumber its assets. 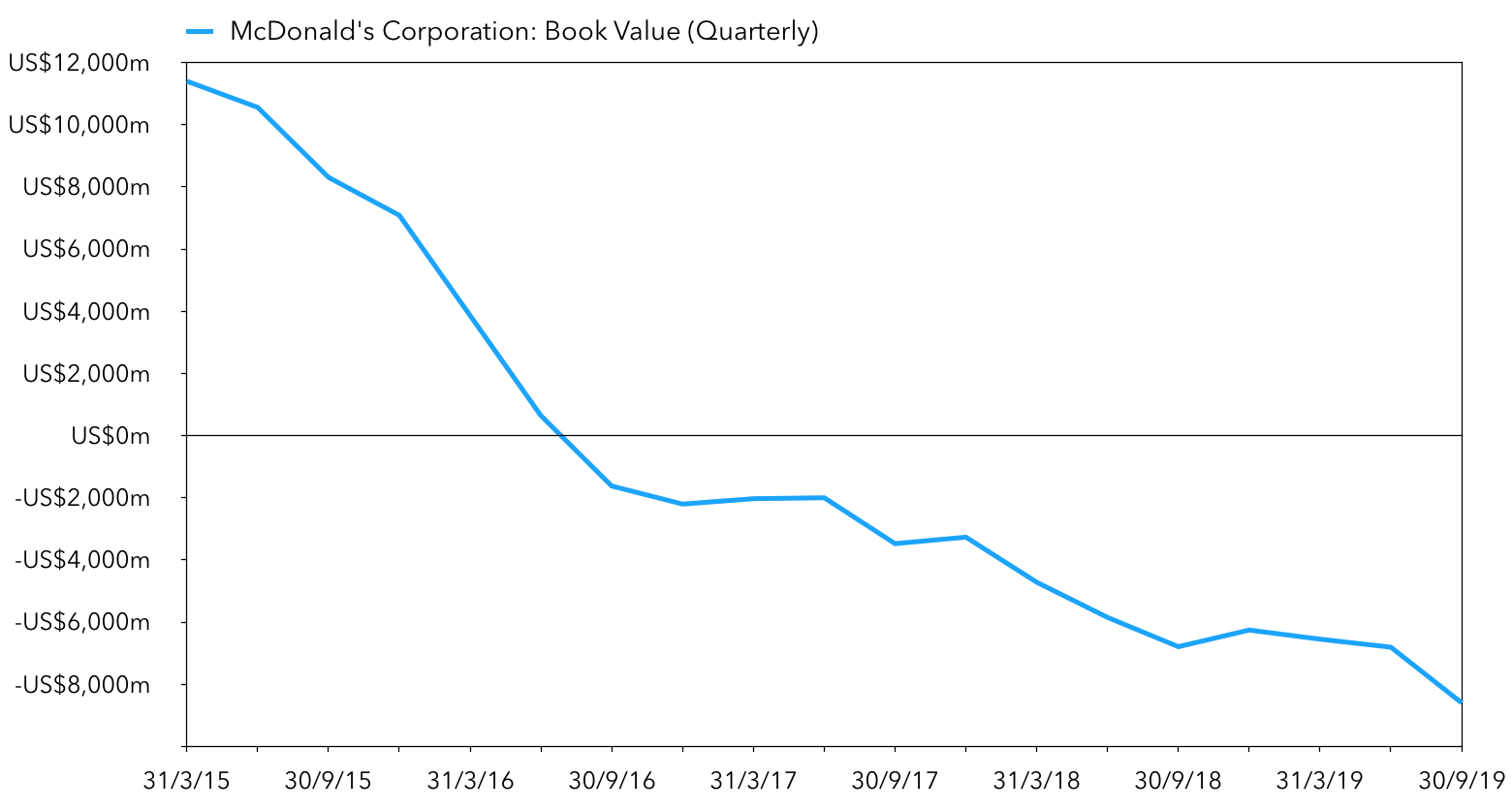 Just to recap, these are the reasons why I think McDonald’s can carry that debt load. Firstly, let’s start with that quirk of the balance sheet: the negative equity. Now, to you and me the term ‘negative equity’ rings alarms bells. Usually in everyday talk it means somebody has an outstanding mortgage that is worth more than the underlying piece of real-estate (usually when property prices have tanked in periods of high leverage).

In McDonald’s case we have something similar. In theory, if it liquidated its business the resultant cash would not cover its liabilities. That, and I stress this bit, is only in theory. The real story with the company’s negative equity is that its assets are massively understated. For starters look at its property and equipment line. McDonald’s reported something like $25,000m worth of net real estate and equipment at the end of last year. However this is valued at cost. Given that McDonald’s acquired a lot its real estate many years ago, there’s probably a lot of price appreciation that’s not being recorded anywhere. That’s before we even think about trying to value the brand, which of course is totally unaccounted for.

The second reason has to do with the subtle shift in the company business model. These days McDonald’s operates well over 90% of its restaurants under various ultra-profitable (for McDonald’s) franchise agreements. The franchisees pick up most of the headline costs – ingredients, paper, and so on. They pay rent, and also have to pay a few percentage points out of that $2.65m per-restaurant annual revenue stream in the form of a service fee. Even in the cases where McDonald’s doesn’t own the land outright, it will lease it from the landowner and then sublease it back out to franchisees at a massive markup. Unless business really drops off, this revenue stream will prove to be very stable and reliable. As a consequence, McDonald’s can carry more debt (and at ultra-low interest rates to boot).

For those reasons I do not worry too much about the debt load here. That said, increasing leverage is not something you can do indefinitely – even when you possess one of the greatest businesses on the planet. Here’s the thing though: McDonald’s is still on track to grow it’s current $1.25 per share quarterly dividend by high single-digits per annum. 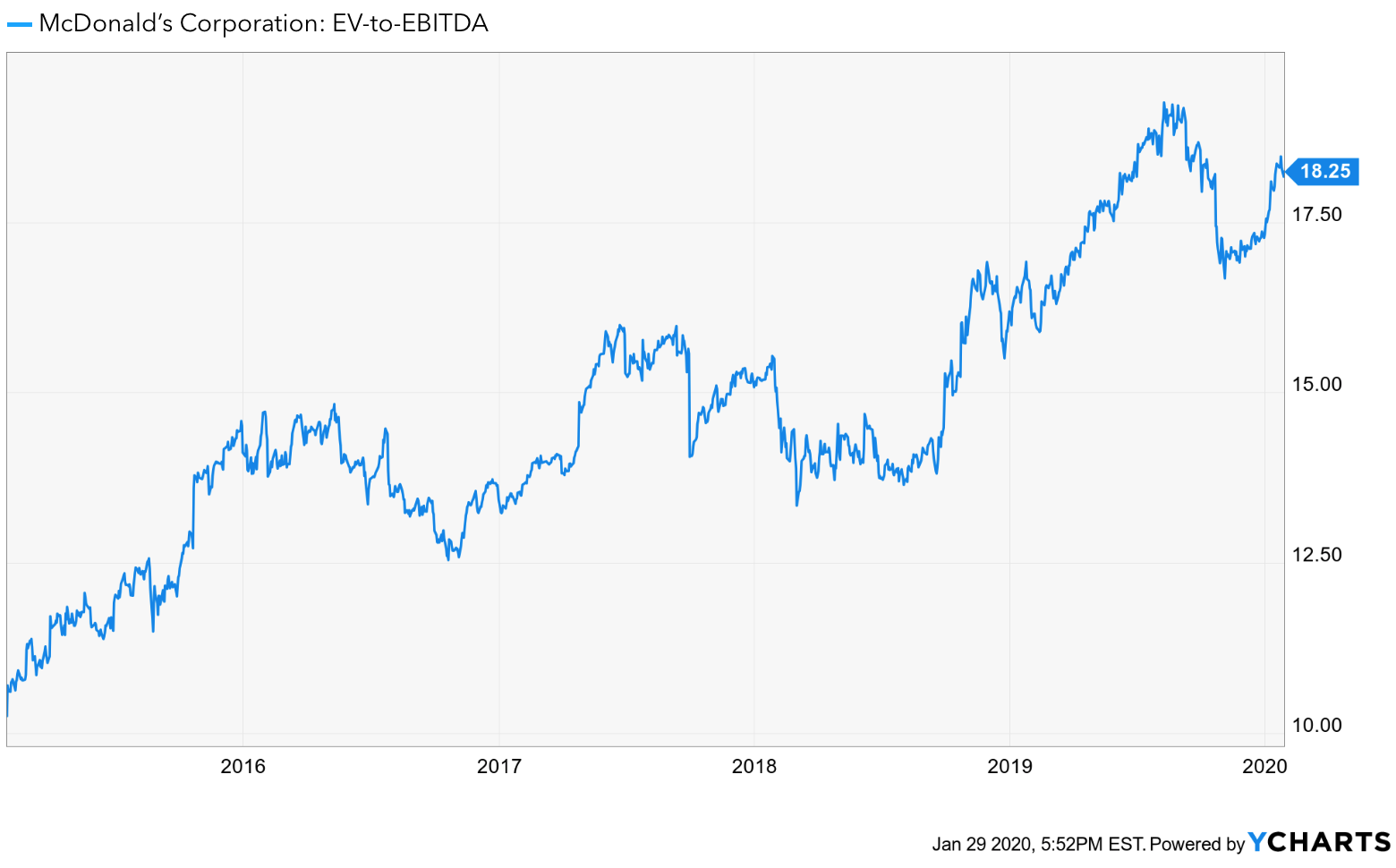 Now, at 27x earnings you might think this is problematic (it’s even more expensive in debt adjusted metrics such as EV/EBITDA). But in this low interest rate world I wonder whether that is actually the case. For instance imagine if McDonald’s stock moved down its historical average of circa 18x earnings. It would yield a cash dividend in excess of 3.6% versus 10-year Treasuries at circa 1.6%. Although I’ve called McDonald’s expensive before, I just can’t see that kind of big downward move happening.