written by The Compound Investor October 24, 2019

On Tuesday morning fast food giant McDonald’s (MCD) released its third quarter results. The headline grabber was a rare earnings miss, though beneath the surface the numbers actually looked fairly positive. Suffice to say the market did not respond particularly well. As I type McDonald’s shares are changing hands for under $198 apiece, down around 6% on Monday’s closing price. 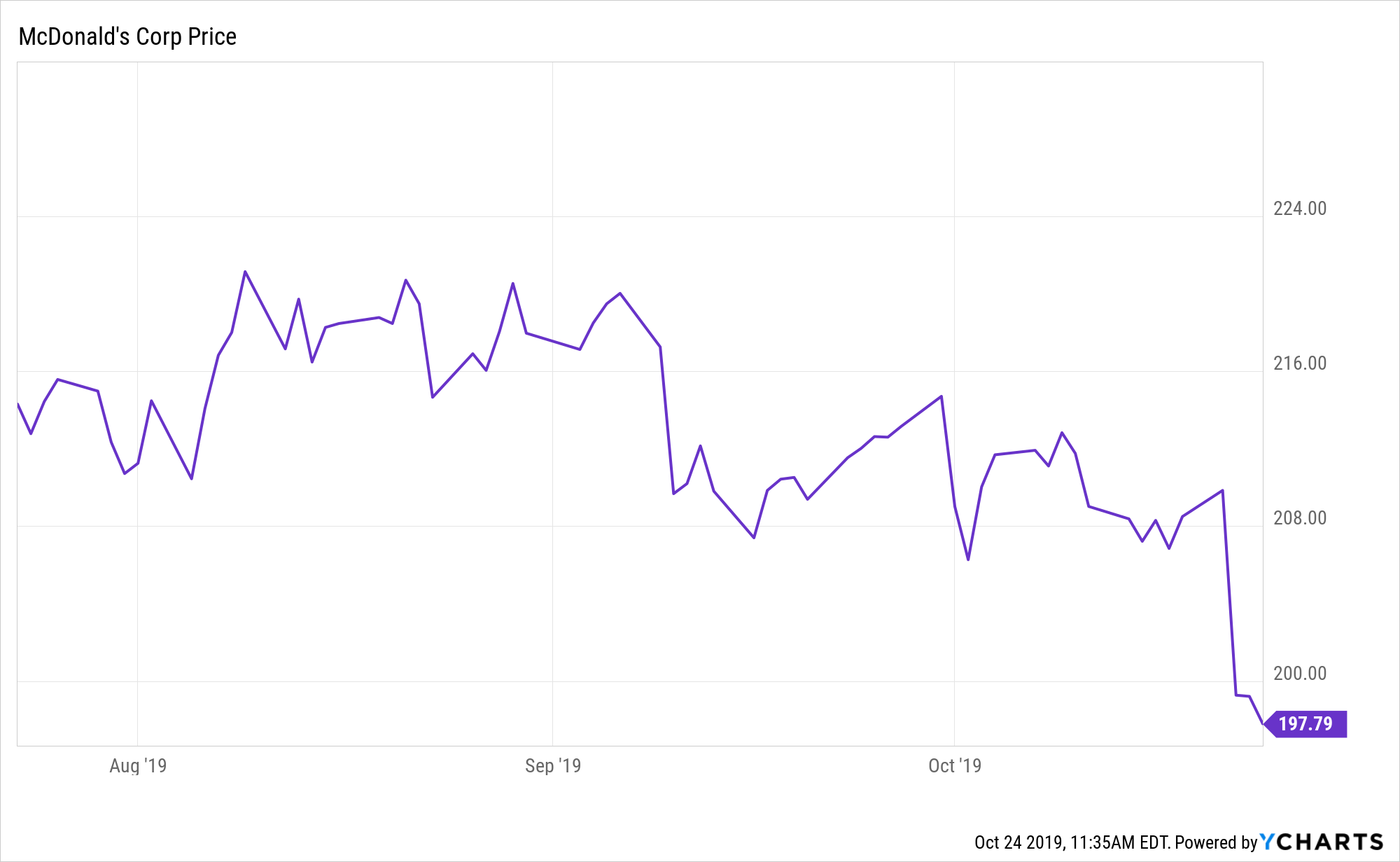 First, let’s get that headline miss out of the way. Earnings per share for the three month period ended September 30th came in at $2.11. That was around $0.10 lower than the consensus estimate of Wall Street analysts and barely above the $2.10 per share reported in 3Q18. For the nine-month period ended September 30th the company reported net profit of $5.80 per share, around 1.5% higher than the $5.72 per share earned over the first three quarters of 2018. And there you have it: almost $9 billion wiped off the company’s market value on the basis of those figures.

In actual fact there are a few things going on here; some positive, some negative. I’ll start with the former. Firstly, global same-store sales growth looks quite solid. In terms of both the third quarter and first nine-months of the year comparable sales were up 5.9% vis-a-vis their respective 2018 periods. Furthermore, that growth was fairly broad based in terms of the company’s operating geographies. Even the relatively stodgy domestic U.S. market managed comparable sales growth of 4.8%.

Secondly, and not unrelated to the point above, total systemwide sales continue to advance in the right direction. As the name implies this is literally the sum of all the dollars that get spent in the company’s restaurants over a given period. Of all the metrics to monitor this is probably the killer one in terms of brand health.

Globally, systemwide sales increased by $1.3 billion to $26 billion in 3Q19: call that growth of around 5% versus 3Q18. Over the first nine months of 2019 system wide sales were up 4%. Both of those numbers jump to around 7% after stripping out negative foreign currency movements caused by the strong dollar. (Speaking of foreign currency movements, they took off around $0.03 from the $2.11 earnings per share figure I quoted above.)

The key shareholder takeaway from all those points? The springboard for future profit growth looks solid. The earnings miss has some one-offs in it that won’t particularly bother anyone with a long-term outlook. If systemwide sales growth carries on in that vein then management’s long-term goal of high-single digit earnings-per-share growth looks very doable.

As for the negatives, two things spring to mind. First, domestic traffic growth is still negative amid a fiercely competitive environment. (In other words fewer folks are visiting McDonald’s in the USA). At the moment that trend is more than offset by existing customers simply spending more per visit. That said, there’s only so much you can actually spend in a fast food joint, so that trend continuing isn’t something you particularly want to rely on going forward.

Around 36% of the roughly 38,250 McDonald’s stores worldwide are located in the United States, so domestic traffic growth is definitely something to keep an eye on. On the flip side, once you factor in the the strong international performance I mentioned above, global guest count growth actually came in positive.

The second point I’d highlight is the valuation. Before third quarter earnings hit the newswires McDonald’s stock traded somewhere in the $210 per share range. Full year net profit per share should come in at around the $8 mark, while the stock currently pays an annualized cash dividend of $5 per share. Let’s call that a forward price-to-earnings ratio of 26.25 and a dividend yield of 2.4%. Viewed in isolation that looks fairly expensive to me; more so given McDonald’s also carries around $58 per share in net debt on its balance sheet. Shaving 6% off the stock price from that level is a drop in the ocean.

If you enjoyed this article please hit the “heart” button below. This gives me a rough indication as to what kind of content is popular. If you would like to get new posts delivered directly to your inbox, feel free to enter your email address in the sidebar and hit the subscribe button. Thank you for reading!