Finding a company that regular sports a zero net-debt position on its balance sheet has not been easy over the past few years. The big technology firms look like the obvious exception to that rule, as do the large payment processors. That brings me to Mastercard (MA) stock, which ended the first quarter around 20% lower than it started. Aside from the insane profitability metrics, the state of its balance sheet ought to give anyone seeking a save haven some comfort.

To expand on those two points, let’s just consider the raw numbers. Firstly, the profit machine. Every time somebody uses one of its branded cards, the New York state-based Mastercard ends up taking a tiny cut of the transaction volume. Its network facilitates the transaction between you, your bank, the merchant that you are buying something from, and their bank.

Last year, the cumulative effect of these transactions resulted in a $16,000m net revenue business to Mastercard. Around 40% of that top line figure ended up as net profit. That makes it one of the most lucrative money spinners listed across global stock markets. Furthermore, and owning to the nature of its business, it will likely see strong future growth for a long time to come. 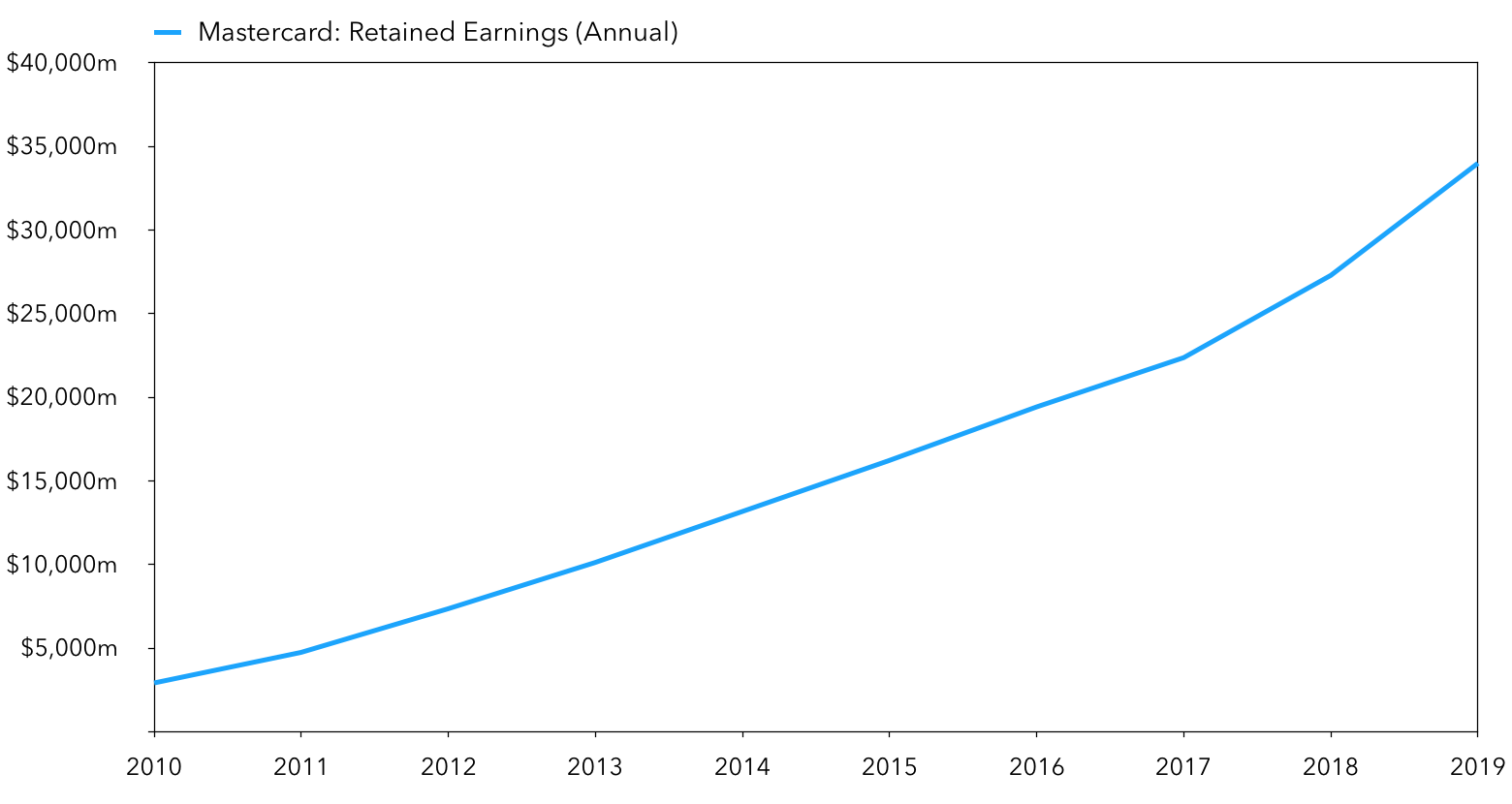 Only two things stop this from being a complete slam dunk. Firstly, technological changes may make this lucrative business obsolete. For various reasons I consider this threat overhyped and very unlikely to materialize in the medium term. The second, and more real threats, are regulatory and legal challenges. Mastercard always seems to face lawsuits and regulatory probes in some place or other. That will never go away, although it hasn’t stopped the growth juggernaut to date.

That leads me to the second point: the balance sheet. Perhaps because of these dual threats, plus the sheer amount of cash it generates, Mastercard has maintained a fortress-like balance sheet. A quick look at the numbers tells you all you need to know. At the end of last year it reported gross debt of around $8,500m, which falls to just $850m after stripping out almost $7,700m worth of company cash and short-term investments. That resulting net debt figure works out to around six weeks’ worth of post-tax profit here.

Some other tidbits to consider. Firstly, Mastercard assumes no liability when it comes to the financial health of the consumers that carry its cards. I mean if I default on my credit card debt, that’s a problem between me and the issuing bank. All Mastercard really does is facilitate transactions. Most folks know this, but it’s still worth pointing out, especially if we do enter a nasty recession.

Secondly, its future obligations are limited. I mean, it will pay just under $300m in interest payments to service that gross debt figure this year. Even tacking on other commitments – sponsorship payments for sporting events, operating leases for offices, and so on – it’s less than a billion dollars in 2020. No big deal, because even if the global economy suffers a slowdown, Mastercard will still mint money due to how fat its profit margins are. As a result of the above points, it just managed to raise an extra $4,000m in debt at cheap interest rates. 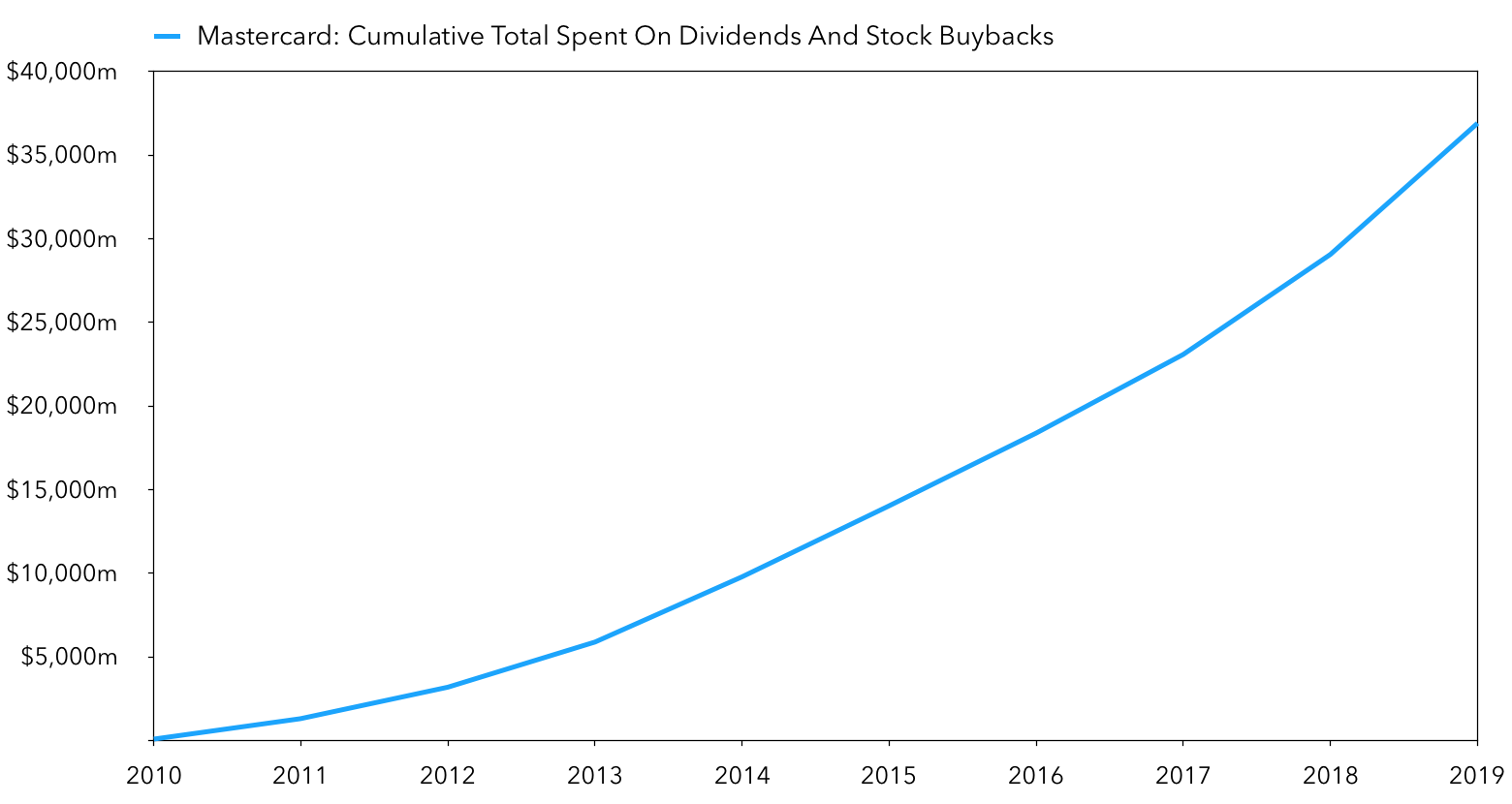 Finally, Mastercard can afford to carry on absolutely showering its shareholders with cash. Heck it has already returned nearly $40,000m to shareholders by way of dividends and stock buybacks since 2010. It spent all of that money and still sports a virtually zero net-debt position. The annualized dividend takes up less than 20% of net profit. Or put another way, Mastercard looks set to carry on growing its retained earnings regardless of what happens this year.

At time of publication Mastercard stock trades for just under $230 per share, having hit as low as circa $200 per share last month. Before the coronavirus pandemic took off the company guided for mid-teens profit growth this year. For obvious reasons, we should probably junk that. Indeed the company released updated guidance about a week ago. In its statement, management revealed that net revenue growth will come in at a low single-digit pace in the first quarter. On that basis, let’s call underlying profit growth as being virtually flat this year.

Now, the company reported net income in the $8,000m range last year. We can therefore put net profit at the $8.00 mark on a per-share basis given just over 1,000m shares outstanding. That works out to a current valuation of around 28.75x annual earnings. Though it may not sound like it, that is a decent deal assuming you put a ten-year timeframe on it. By that point I fully expect Mastercard to report in excess of $30.00 per share in annual net profit (having also paid out over $20.00 per share by way of cash dividends).

How you did the valuation of MA stock? I did not understand this part:

“Though it may not sound like it, that is a decent deal assuming you put a ten-year timeframe on it. By that point I fully expect Mastercard to report in excess of $30.00 per share in net profit, having also paid out over $20.00 per share by way of cash dividends.”

The 30 EPS is the cumulative EPS at year 10? Same for dividends per share?

No no, not cumulative EPS. Standalone, as per your calculations at the bottom. Maybe it’s too aggressive, we will see.