McDonald’s: Returns Since The Millennium

There have been countless articles in financial media discussing the future of McDonald’s (MCD) over the last few years. Sales growth has been pretty flat, and this has led to the usual doubts about whether the company still has a place in the ‘new world’ of health conscious consumers. For what it’s worth, I think the situation has been overblown – something that seems to be confirmed every time I walk past a busy McDonald’s outlet.

What I find interesting are the similarities with the early-2000s, a period when an investment in McDonald’s shares could well have delivered a 70% loss. The stock was flying high at the end of the 1990s, along with most others in the dot-com boom. Its value had pretty much doubled in the space of two years, and the company was growing sales and profit at a double-digit annual clip. As the millennium came to a close, McDonald’s shares traded at something like 30x annual earnings.

The rest, as they say, is history. Revenue growth slowed, while reported earnings per-share dropped by half over the following three years. The stock went on to lose over 70% of its value in the bear market of the early-2000s. That tough environment produced exactly the same concerns regarding the company’s long-term future as we hear today.

What do shareholders do in the face of difficult trading conditions and a torrent of concerns about their company’s place in an ultra-competitive industry? Many would have undoubtedly bailed as the stock price continued to decline. Some were probably unfortunate enough to sell right at the bottom, which meant a 70% drop from the peak.

The underlying business, however, was actually pretty stable. The stock may well have been overvalued, but revenue and free cash flow were rising. Headline earnings had dropped due to one-time impairments, but the core earnings power of the company was intact. 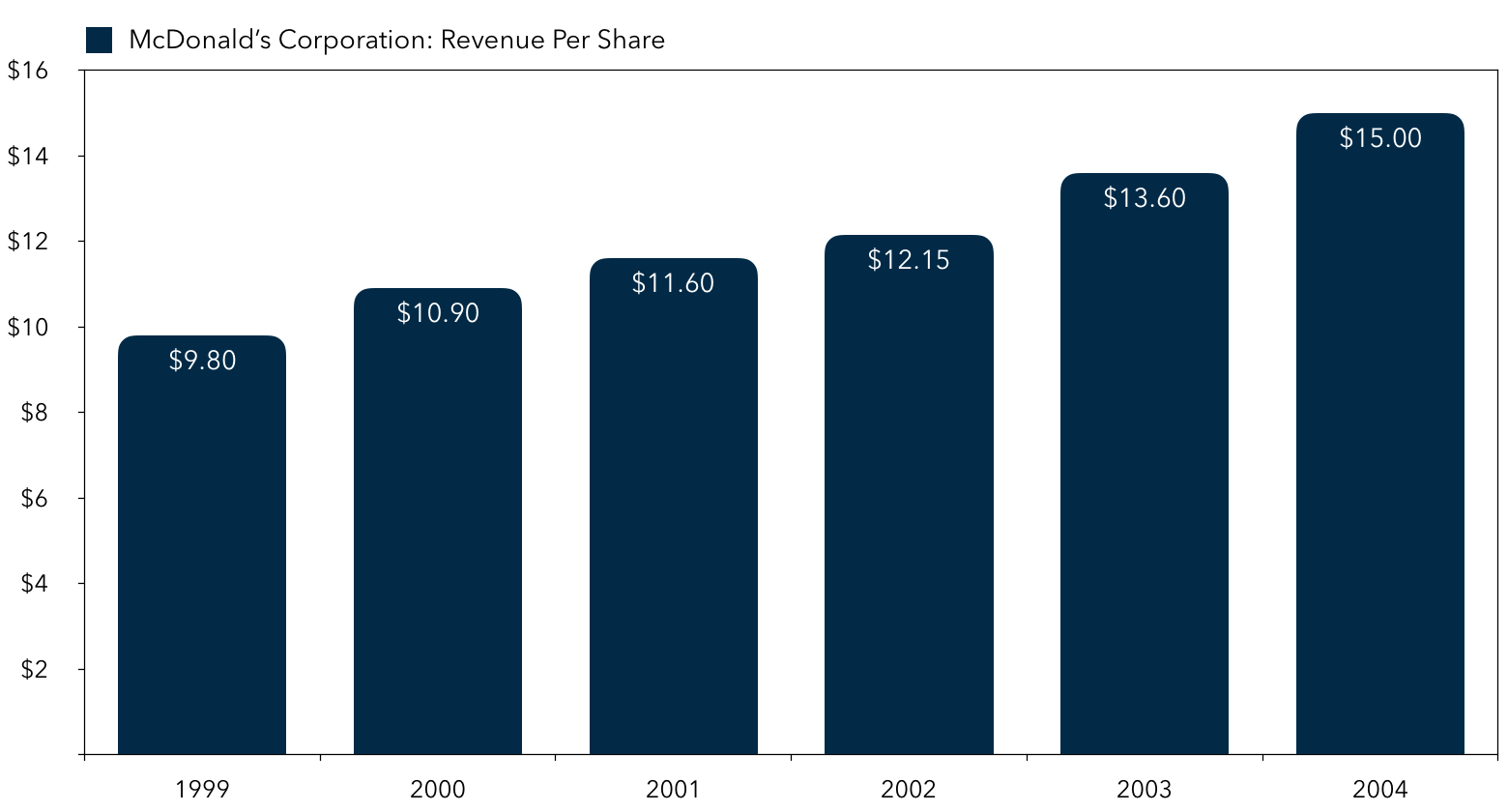 More importantly, the McDonald’s moat never showed any serious signs of coming under pressure. What investors did see, though, was a brutal compression of the stock’s earnings multiple; something that was entirely down to its market valuation during the bubble. An earnings yield of 3% in late-1999 doesn’t scream value given that risk-free 10-year U.S. Treasuries were offering a yield around the 6% mark. Either the market was baking in some amazing growth for McDonald’s going forward, or the stock was overvalued. It was the latter that proved to be the case.

The malaise of the early-2000s also set the stage for the huge returns that came next. McDonald’s stock finally bottomed sometime in 2003 when it was trading at just under $13 per-share. It had traded for over $45 per share just four years earlier. The valuation multiple had fallen to about 10x forward earnings at the bottom. 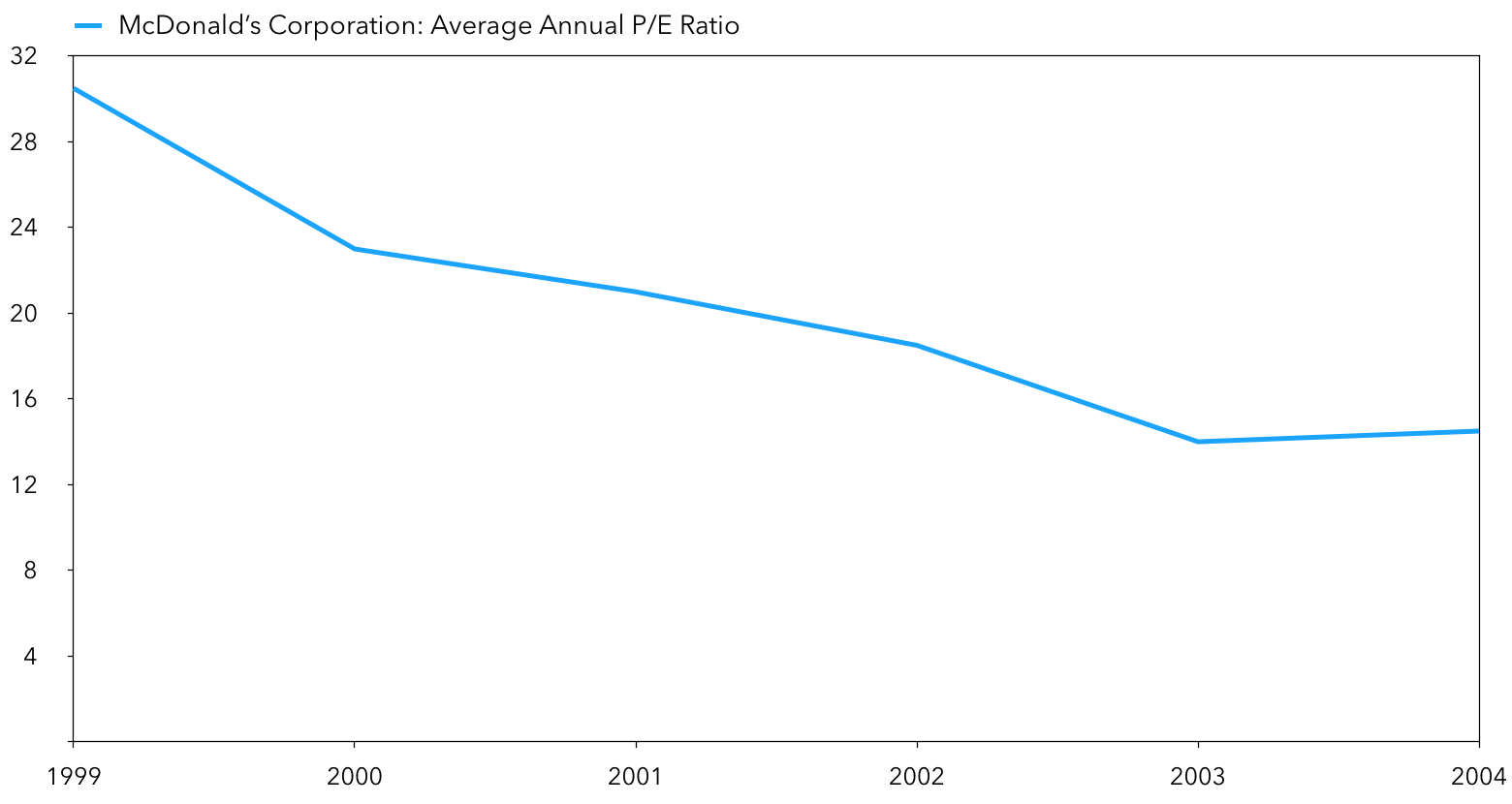 Perhaps it was due to investor burnout at having seen the stock collapse 70% during the bear market. Or maybe investors were really buying the narrative that competition and healthy eating would kill McDonald’s. Either way, the fact is that at those prices McDonald’s stock was showing serious value. I know it is easy to say in hindsight, but being able to invest in the shares at that kind of valuation was a gift, especially given the quality of the company’s underlying profitability.

It is almost inconceivable that picking up McDonald’s shares with a 7% earnings yield will not deliver good returns over any reasonable time frame. And that’s pretty much exactly what happened over the last thirteen years. Whilst the Dow Jones Industrial Average recovered from the bottom with 5.4% annual gains, McDonald’s stock destroyed it with gains closer to 20% per annum over the same period. To borrow a Peter Lynch phrase: that’s a ten-bagger in under fifteen years.

Let’s look at the actual returns that an investor in McDonald’s stock would have seen over that entire period. A $10,000 investment would have bought you 218 shares of the company’s stock at the peak back in late-1999. Assuming you held for the entire period, those shares would be worth $28,000 today. That’s despite seeing the value of those holdings decline all the way to about $3,000 at one point.

What keeps you in the game when you’re looking at those kind of losses? Two things in my opinion. Firstly, and as mentioned above, the underlying business keeps doing well. The company’s earnings have risen from roughly $1.45 per-share in 2000, to around $5.50 today. Secondly, the company has paid out cash dividends worth around $26.88 per share. That works out to around $5,860 on the initial $10,000 investment. 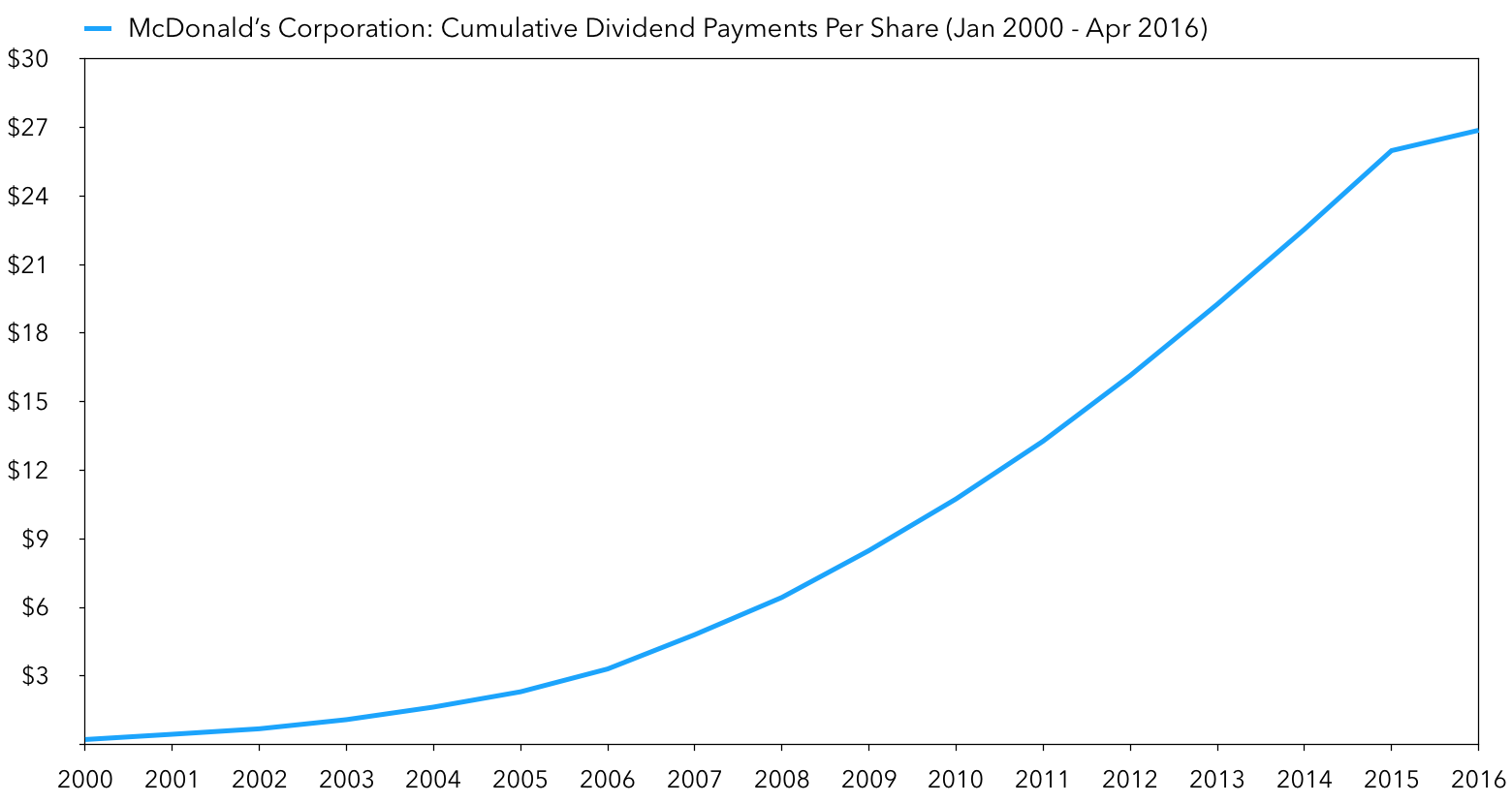 The total return, and this assumes not reinvesting dividends, would have been $33,860. What if those dividend payments were continuously reinvested into more McDonald’s shares? Well, in that case the total return would have grown to approximately $46,700. That’s equivalent to an average annual return of 10%.

In a scenario in which those dividends were not reinvested, the returns would have been 7.9% compounded annually. Those aren’t bad returns for buying in at the peak, all things considered. Above all it’s a good lesson in how a high quality company with decent earnings growth can make up for some poor investing decisions given a suitably long timeframe.

Stock Market Returns From The Crashes Of The 1920s