Exxon Mobil: The Past Twenty Years

There was a great research note going around last year comparing the twenty-year returns of various asset classes to the returns of the average investor. Somewhat unsurprisingly, the latter ended up performing quite poorly against this basket. (I think the average retail investor came away with annual returns of 2% during the period of the study, with only Japan, emerging markets in Asia, and good old inflation performing worse than that).

What was interesting, though, was not the worst performing asset class, but the best. Had I guessed beforehand, I would have probably gone for something like technology or maybe the Russell 2000 Index. The winner turned out to be energy, which delivered total returns of just over 12% per annum. (I should add that this was before the crash in oil prices started in mid/late-2014). Given that oil prices have been in the grip of a brutal bear market ever since, let’s go over the shareholder returns of the cream of energy stocks: Exxon Mobil (XOM).

To get some idea of how high quality Exxon’s business is you just need to know one fact: the company is one of only three that has a credit rating above that of the United States government (the other two being Microsoft and Johnson & Johnson in case you are wondering). Regardless of whether you think that is a fair reflection of the company, or indeed of the USA, it is a remarkable statistic. It underlines the wide-moat business that the company has built up over the years; a business which runs from oil & natural gas exploration, all the way to production, refining, chemicals, and the end consumers at gas stations.

Two key advantages have made that business the powerhouse that it is today. First, the huge economies of scale it enjoys, giving it a lower cost basis on reserves compared to smaller producers. The second is the strength of its balance sheet. Exxon will be the last man standing in a downturn, allowing it to snap up reserves and do M&A activity at a time when low prices are hitting others hard.

Let’s take a look at Exxon Mobil’s stock returns, starting with the share price. Imagine an investor buying the stock back in April, 1996. At the time, Exxon shares changed hands for somewhere in the region of $21 each. Our investor decided to purchase 475 shares (adjusted for the various stock splits over the years), for a total consideration of around $10,000.

He witnesses numerous oil booms and slumps in the years that follow. In 1998, he saw the nominal price of oil dip below $12 per barrel. A decade later, he saw the price rise to a record high of around $147 per barrel. It crashed back down to a low of $30 per barrel just a few months after that. The broader stock market underwent similar booms and busts along the way.

Today, Exxon shares are going for around $80.30 apiece, leaving our investor with around $38,140 worth of stock. Or put another way, he has seen 7% annual share price appreciation over the past two decades. Given the recent oil price crash has wiped 40% off the 2014 share price, I’d say that is a pretty good performance overall.

Now, it is crucial to appreciate the degree to which share buybacks have contributed to those returns. If you dig up the annual report from fiscal 1995, you will see that the company reported 4,968m shares outstanding (split-adjusted). That figure is masked by the 1998 merger between Exxon and Mobil; the result of which meant the combined entity having 6,950m shares in issue. By the end of 2015, the figure had fallen to 4,183m shares outstanding. In other words, Exxon annihilated a whopping 40% of the float over that period.

This is the great thing about companies that tend to generate tremendous amounts of free cash flow. Those compounding gains from buybacks, fully funded from surplus profit, will add up a lot over long timeframes. What about dividends? Well, the per-share dividend has almost quadrupled in that timeframe. Exxon paid a split-adjusted annual dividend of $0.78 per share back in 1996. By 2015, that had grown to $2.88 per share.

In total, Exxon has paid out around $13,680 in cash dividends on our investor’s initial $10,000 investment. (That’s assuming they accumulated in a broker account and were not reinvested into more shares). In total, our investor therefore comes away with around $51,820 worth of stock and cash. I have that being equivalent to average annual returns of approximately 8.5%. 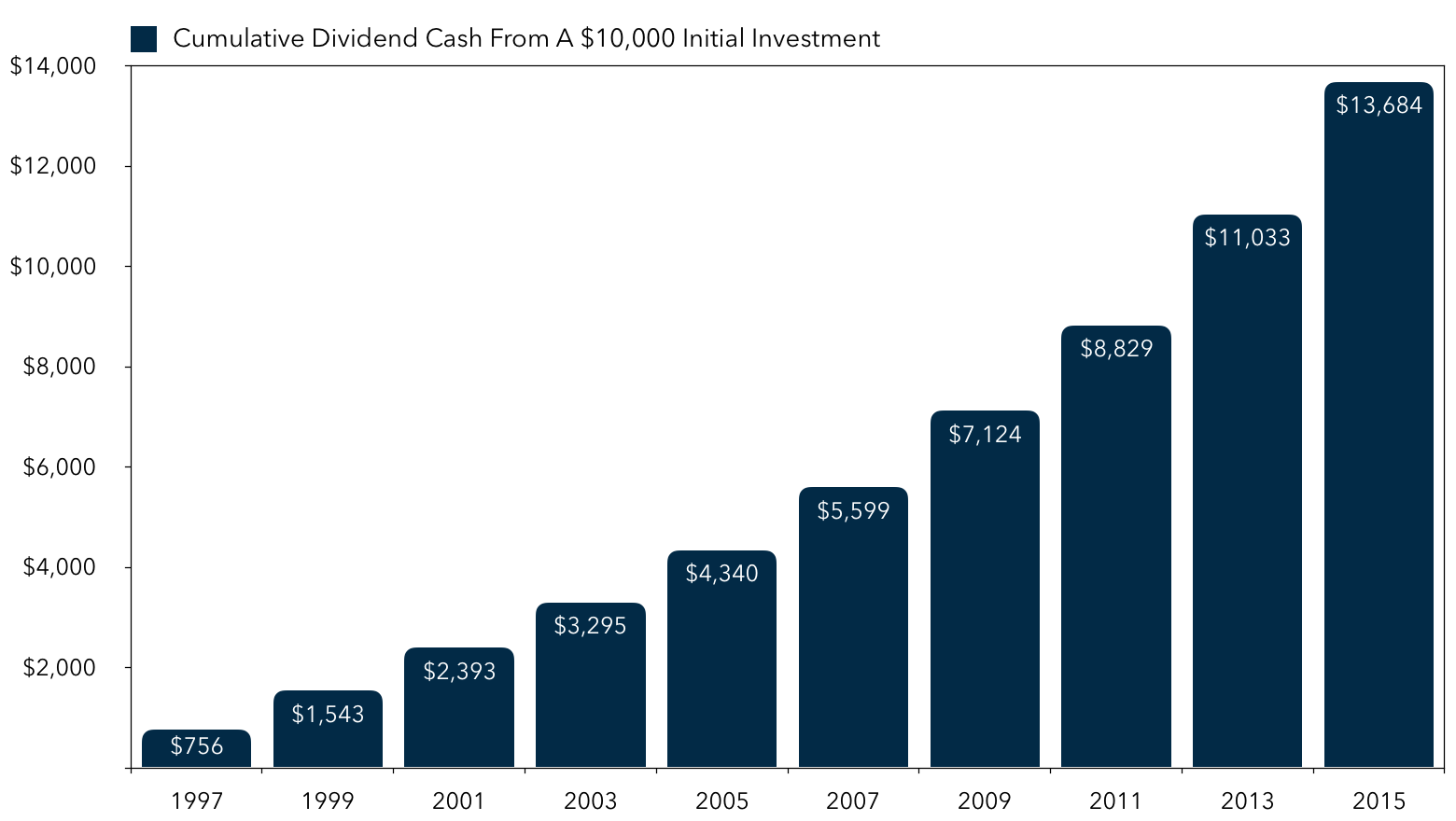 What if those dividends were automatically reinvested into more stock? Well, as you can imagine, the returns would have been even greater in that case. The DRIP calculator shows a total return of $63,650 on the $10,000 outlay, equivalent to annual returns of 9.5% over the past two decades.

It’s a great performance, especially considering the following two points. Firstly, those returns have obviously been reduced by the carnage in the energy sector over the past 18 months. Secondly, Exxon was already one of the world’s largest corporations back in the mid-1990s. Assuming cheap valuations, size becomes less relevant with high quality stocks. By that I mean you can see great returns simply via dividends and stock buybacks. And where does Exxon derive its quality earnings from? Huge economies of scale that allow it to operate at a fraction of the cost compared to smaller peers.

Stock Market Returns From The Crashes Of The 1920s