I have generally been quite optimistic on the prospects of Kraft Heinz (KHC) stock. That may sound odd given what a disaster zone it has been, but 3Q19 showed improvement and with the stock in the 12x annual profit area any kind of turnaround would do wonders. Anyway, the company released its latest set of quarterly results a couple of days ago. The market reaction was overwhelmingly negative, and the stock heads into the weekend well below its pre-results level.

Most of the headline numbers continue to look poor. Net sales declined around 5% in dollar terms, improving to a 2% drop after stripping out currency movements and divestitures. Volume dropped a pretty alarming 5.8% in the United States, though that was partially offset by a 3% price gain. Quarterly adjusted earnings per share came in at $0.72, down just over 14% on the $0.84 per share it made last year. For 2019 as a whole the company posted adjusted profit of $2.85 per share, down around 18% on fiscal 2018.

Put simply: declining sales and rising costs. For one, the company has experienced cost inflation in terms of things likes packaging and freight which it has struggled to offset. On the revenue side its product offering has been a bit of a mess. The ‘Kraft’ portion of the business has a lot of very weak brands that are struggling due to falling demand and cheaper store-owned alternatives. It booked an additional $215m impairment charge to its Maxwell House coffee brand on top of billions already booked against the Kraft and Oscar Meyer brands.

On top of that, the company’s more recent innovations have not contributed positively to offset any of this. The parts of its business that are strong (e.g. sauces & condiments – led by the iconic Heinz Ketchup) are not a sufficiently big enough piece of the total empire. The overall effect has been a noticeable drop in revenue and profit margins. I mean a few years ago the company was posting gross profit margins in the 37% range. That has fallen to around 32.5% as of last year.

The executive team plans to combat this by simplifying the company’s stable of brands and via greater cost control. Management also plans to concentrate more on its stronger brands, which will hopefully lead to greater pricing contributions and therefore more stable sales figures. The media budget is going up 30%, paid for by slimming down its new product offerings. The company plans to reveal more on its strategy in New York later this year.

The above issues have been exacerbated by the state of the company’s balance sheet. The size of the debt load isn’t news to anybody, but it has made the whole situation a lot worse than it otherwise would be. Anyway, at the end of 2019 the company reported total financial debt of just under $27,000m net of cash and equivalents. That was down around $3,000m on where it started the year, primarily a result of the cash raised from divestitures along with around $800m worth of post-dividend free cash flow. 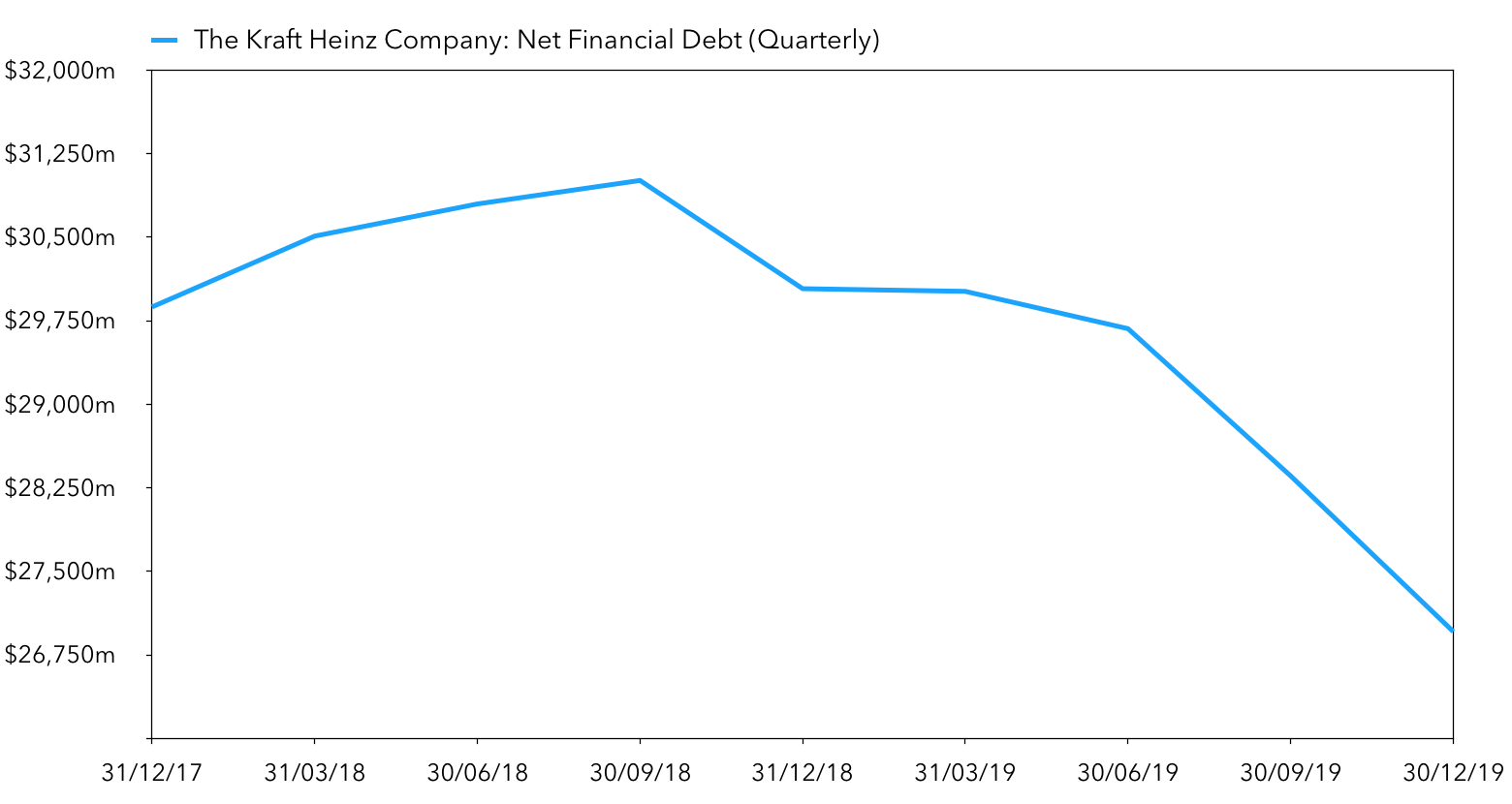 Speaking of the dividend, management seems oddly optimistic on it. It remains at its current quarterly rate of 40¢ per share despite predictions of a cut. Management claims the policy reflects confidence in its turnaround plan. It also reckons those turnaround efforts won’t require much by way of extra cash.

Management’s position aside, I doubt I’m the only shareholder wanting it to be cut right now. I mean in cash terms the dividend costs Kraft somewhere in the region of $500m each quarter. Call it $2,000m per annum. Assuming it went to zero we’d be looking at circa $600m in retained earnings each quarter. Obviously Kraft could use that for more rapid debt reduction and to invest further in its brands. Savings from interest expenses alone would also be fairly significant right now (Kraft spent $325m on interest last quarter and $1,360m over the year as a whole).

Post-dividend cash generation will only come in at around $500m next year, equivalent to just under 2% of its total net debt pile. Okay, so the company only has $1,000m of debt due this year. It can easily meet that with cash on hand (circa $2,280m, plus the $500m of excess cash generation pencilled in for this year), but things really need to pick up again after 2020. I note that Fitch Ratings has just lowered the company’s status to junk. (S&P Global Ratings has just followed suit as I type).

The shares closed the week at just under the $26.90 mark. As far as 2020 goes, it looks set to be another tough year. The company is guiding for around $2,500m in free cash flow on the back of a $750m capital spending budget. Quick math puts the shares at around 12x expected 2020 free cash flow with a current dividend yield approaching the 6% mark. If your view of Kraft is that 2020 represents the nadir, then that is a decent long-term deal. That said, and given the uncertainties here, I understand why a lot of folks will be staying clear for the time being.

The Actual Dividend Millionaires Of America