Tracking the fortunes of Kraft Heinz stock reminds me of a well known investing article penned by Warren Buffett for Forbes. The title – You Pay A Very High Price In The Stock Market For A Cheery Consensus – seems pretty apt given what we know about blue chip stocks. I mean it is rare for very good businesses to get cheap for no apparent reason absent wider market trends.

In the case of Kraft Heinz we certainly have something that seems to tick all those boxes right now. Firstly, it is (or rather it remains) a good company with a solid underlying business. For instance in the first nine months of 2018 it generated $15.78 per share worth of revenue on the back of selling brands like Heinz Ketchup and Velveeta. Of that number, $2.67 flowed straight to the bottom line as post-tax net profit. In the equivalent period last year those numbers were $15.65 and $2.65 respectively. In other words despite its problems the company remains a fairly stable money spinner.

Speaking of problems, yes the company has its fair share. A lot folks are worried about the rise of store-owned brands and the impact this will have on certain Kraft branded products. As you can see the upshot is that growth figures are sluggish to say the least. In the United States, which accounts for around 70% of Kraft’s revenue, sales were down 1.2% in the first nine months of the 2018 compared to the equivalent period in 2017.

That said the stock is certainly starting to look pretty cheap. Indeed it has lost around 35% of its market value over the past year or so and shares are currently changing hands for around $51.50 each. That is on the back of 2017 reported adjusted net profit of $3.55 per share. Let’s call that a P/E ratio of 14.5 based on prior year profits; equivalent to an earnings yield of around 6.90%. The current dividend yield is topping 5%.

The catch, insofar as there is one, is the state of the balance sheet and the aforementioned growth situation. Kraft Heinz currently sports a net debt position of around $30 billion. Annual interest on that is running at approximately $1.2 billion – equivalent to around 20% of operating profit. If you look at things in a debt-adjusted way, the valuation suddenly doesn’t appear so modest. Indeed the debt-adjusted P/E ratio is around 21.7x earnings if my math is correct. 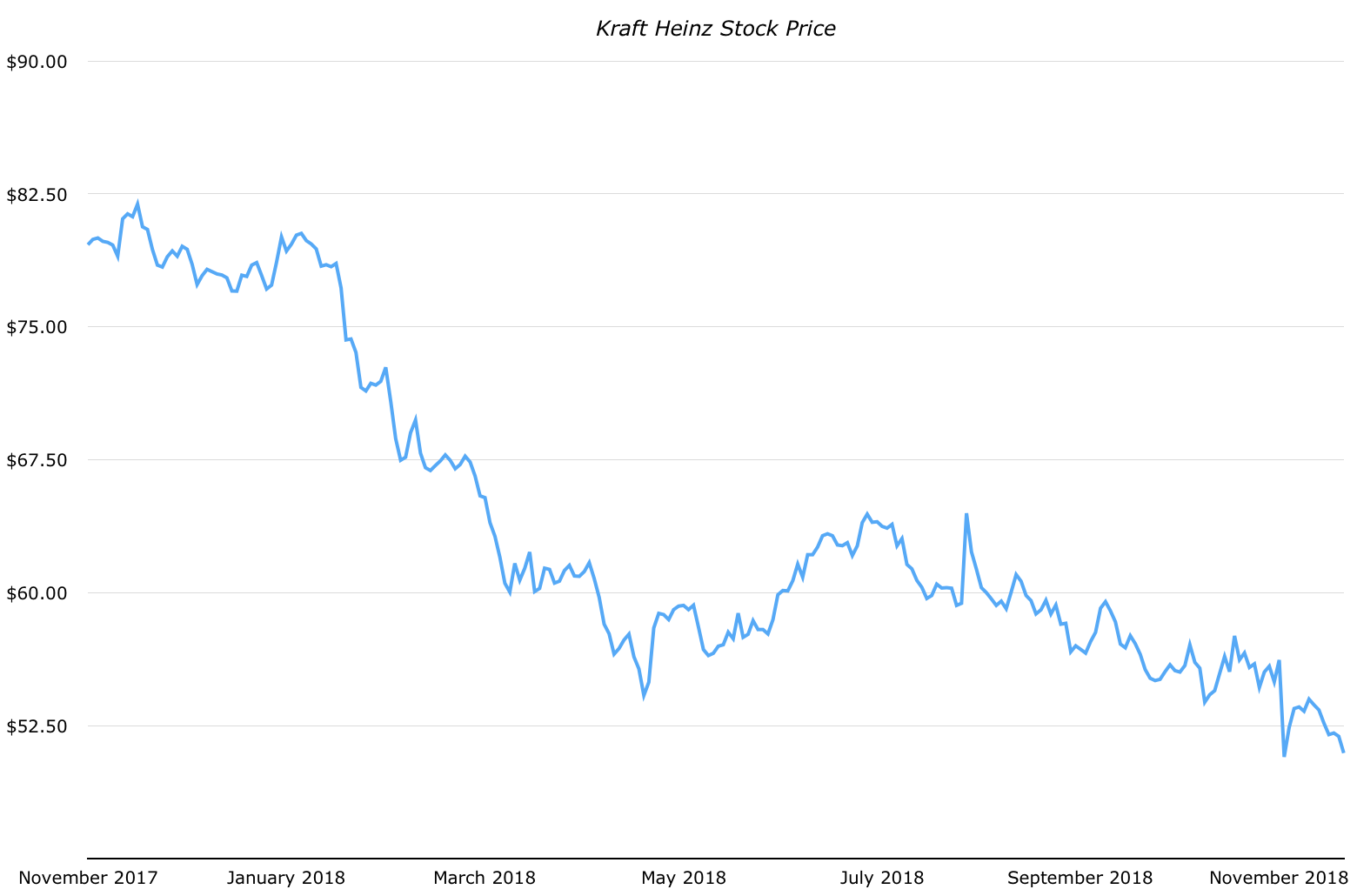 Now the good thing about not having the cheery consensus that Buffett spoke of is that market expectations are markedly more realistic. To understand what I mean by that let us just run though the numbers as they apply here. The stock price as mentioned is currently around the $51.50 mark. This year the company will likely earn net profits of around $3.60 per share.

Imagine a scenario in which the company manages to grow those profits at an annual clip of around 4.5% over the next decade. That would only be percentage point or so ahead of the average historical rate of inflation. By 2028 that level of performance would imply net earnings per share of something like $5.60 per annum. If we apply the current 14.5x earnings multiple to that figure we get a share price of over $80 a decade from now.

On top of that, it is likely we will see a tidy pile of cash dividends accumulate over that period. As it stands Kraft’s annual payout is worth $2.50 per share. Let’s assume that figure rises in tandem with our hypothetical earnings projection. On that basis the total cumulative dividend cash would equal around $32 per share after a decade. In other words we could be realistically looking at a total return of somewhere in the region $115 per share – equal to compound average annual returns of around 8.50%. That is a figure that assumes the dividend cash just accumulates some place earning 0%. The projection would be higher if it were put toward some productive investment.

Okay, what about the real risk of a dividend cut? Well, the flip side to that is the extra cash would pay down debt and thus boost earnings per share. Either way I don’t think it impacts the total return assumption too much. In any case the risk-return tradeoff looks pretty good as far as I can see. Sure, the company has its issues to face going forward. But it still earns tonnes of cash every year off the back of some very stable brands. Pick any timeline you want you’ll still find Heinz Ketchup flying off supermarket shelves at the end of it. Plus, there’s reason we are looking at Kraft stock at 14.5x earnings rather than 20x earnings. As Buffett said, you pay a higher price in the stock market for a cheery consensus.