Kraft Heinz (KHC) shareholders have been put through the wringer over the past few years. The stock has been an absolute disaster zone in terms of wealth destruction and underlying business results have been desperately poor. To compound matters the company slashed its quarterly dividend by some 36% in order to shore up the balance sheet. Against that backdrop the company recently released its third quarter financial results. While not exactly stellar, the good news for long-suffering stockholders is that there are some tentative signs that things may be beginning to settle down.

Kraft sold $6,076m worth of goods last quarter, down around 5% on 3Q18. That looks pretty dire at first glance, though the company is slightly smaller nowadays and has also had to grapple with the effects of a stronger US dollar. Sales dropped 1.1% after stripping out the effects of divestments and foreign currency movements. Adjusted earnings per share came in at $0.69 for the quarter. Wall Street analysts were so pessimistic on Kraft’s prospects that this actually represented a pretty big beat compared to consensus estimates of $0.54 per share.

Some other points to consider. First, volumes continue to decline. Kraft sold fewer products last quarter compared to the equivalent period last year. That trend was marginally offset by the company raising its prices. Volume fell 3.2% in the United States last quarter, while elsewhere in the world the situation looked fairly static. Second, management sees 4Q19 being roughly similar to the third quarter in terms of financial performance. While the third quarter wasn’t exactly brilliant, the numbers are not totally disastrous either. Another quarter in the same vein would be a small sign that business is starting to stabilize.

The health of Kraft’s balance sheet has been in focus for some time now. The profit collapse investors have witnessed here has been bad enough in its own right, but $30,000m worth of net debt makes it a lot worse. On that basis the 36% dividend cut announced earlier this year was a no brainer. I mean at $2.50 per share it was costing Kraft pretty much the entirety of net profit.

The current payout amounts to around $1.60 per share on an annualized basis. Needless to say that appears much more manageable, though a lot analysts (and ratings agencies) think the cuts need to go further. When questioned on the prospect the new CEO had this to say:

But now we are going to a very deep strategic review of the business, understanding how we’re going to see the future performance of the company. And in this analysis, in this review, a capital structure is going to be a very important chapter.

That sounds like it could be on the cards to me. The good news is that debt is indeed making its way down, albeit at a slow pace. I have net debt at around $28,300m as of the end of last quarter, equivalent to around 4.5x annual adjusted EBITDA. By way of comparison net debt clocked in at around the $31,000m mark at this point last year. 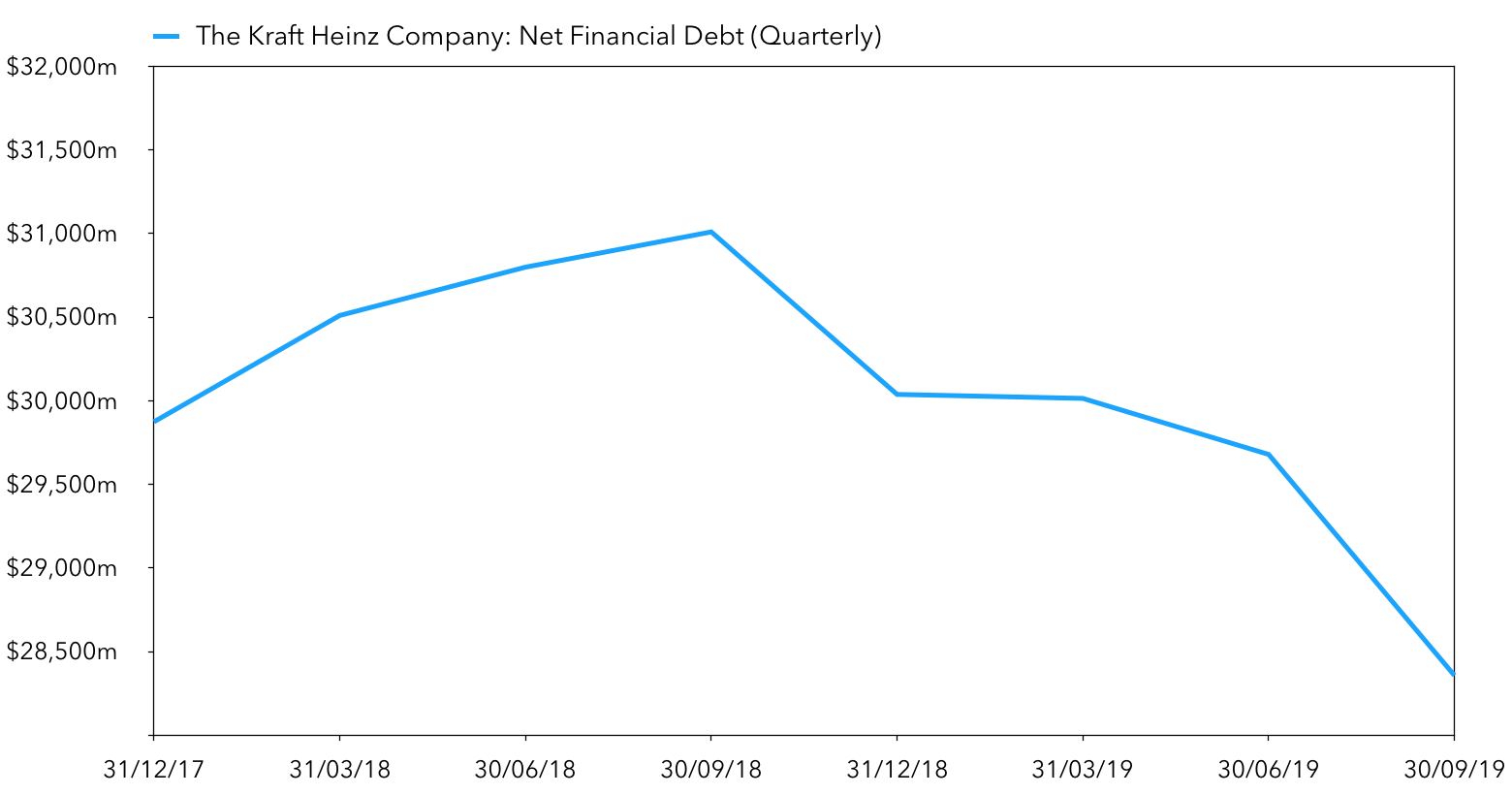 Given Kraft raised around $1,200m by selling its Canadian cheese business, not all of that reduction is a result of surplus free cash flow. As things stand the company probably pumps out circa $1,250m on an annual basis after subtracting its dividend bill. Slashing that figure to zero would free up close to $2,000m more per annum. Time will tell if this is necessary but don’t be surprised if another cut is announced next year. Right now a healthy balance sheet and operational stability take priority over cash distributions to stockholders.

It is a measure of how low expectations here were that Kraft stock jumped after the earnings figure hit the newswires.  Before the announcement on Thursday morning the shares stood at around the $28.50 mark. By close of play on Friday Kraft stock was changing hands for around $32.60 per share.The company has generated underlying earnings per share of $2.13 so far this year. With one quarter left to go in 2019 we could reasonably put annualized earnings per share somewhere in the $2.85 region. On that basis, Kraft stock currently trades at around 11x forward earnings estimates. Call that an earnings yield of 9%. Granted, the company is not completely out of the woods just yet. But with signs that business is beginning to settle down I continue to think it represents decent long-term value.

Exxon Mobil: Shareholder Returns Out To 2025