An article looking at the extended bull market in consumer stocks appeared in The Telegraph recently. While high quality consumer stocks are certainly in vogue right now, that was not the most interesting thing about the piece. What did catch my eye, though, was that the author cited The Nifty Fifty as an example of what happens when investing in periods of high valuation.

The original Nifty Fifty was a group of large cap stocks in the 1960s and 1970s that were billed as perfect buy-and-holds. Combine that sentiment with a raging equity bull market, and you had the recipe for some really lofty valuations. We are taking valuations of like 60x profit for certain household stocks such as Johnson & Johnson. Anyway, the implication of the article was that investing in the euphoria of that bull market was a bad idea due to the poor returns that followed.

Now, it is true that an investment The Nifty Fifty performed poorly in the early-1970s. However, the article is also guilty of cherry picking to make its point. In reality, The Nifty Fifty is a good example of how high quality blue chip stocks will yield great returns over the long run.

Turn the clock back to August, 1972. Richard Nixon was finishing his first term as POTUS, and ground combat troops were withdrawing from Vietnam. Grocery chain Walmart had also just started trading as a public entity on the New York Stock Exchange.

Imagine a $100 investment in each of The Nifty Fifty shares. Among the holdings are companies such as Coca-Cola, Walmart and McDonald’s. In total, the investment amounts to $5,000 in 1972 money, which is equivalent to around $28,000 today after inflation.

There is no official list of the original Nifty Fifty as far as I can see (each publication differing slightly in the composition), but for the purposes of this demonstration it doesn’t matter too much. It is fair to assume that there were exactly fifty companies and that our investor evenly distributed his $5,000 starting capital among them.

The first theme that is evident from the history of the Nifty Fifty is diversification. No matter how high quality a company is, there is always a risk that one day it will go bust. That might be down to industry disruption, poor management, financial crises or anything else for that matter. The risk is always there.

The best example of this from the original group of Nifty Fifty stocks is Eastman Kodak. Kodak’s business was once every bit as stodgy as some of the high quality blue-chips trading today. After all, the camera brand was known in households across the globe. Eventually, though, the advent of digital technology made its business obsolete; an extremely profitable and high quality stock reduced all the way to nothing. Other Nifty Fifty stocks met the same fate, but the diversification among other high quality names more than offsets that damage.

In fact, let’s just examine the returns of the three stocks mentioned above: Coca-Cola, Walmart and McDonald’s. Let’s completely ignore the performance of the other shares that made up the list and see how that $300 did. Let’s start with Coke. One-hundred bucks invested in Coca-Cola stock in 1972 would be worth $6,110 today. The same investment in McDonald’s stock would be worth around $8,990. In the case of Walmart, the comparable figure is a massive $107,429. That’s not a typo by the way – Walmart returns really have been that spectacular. 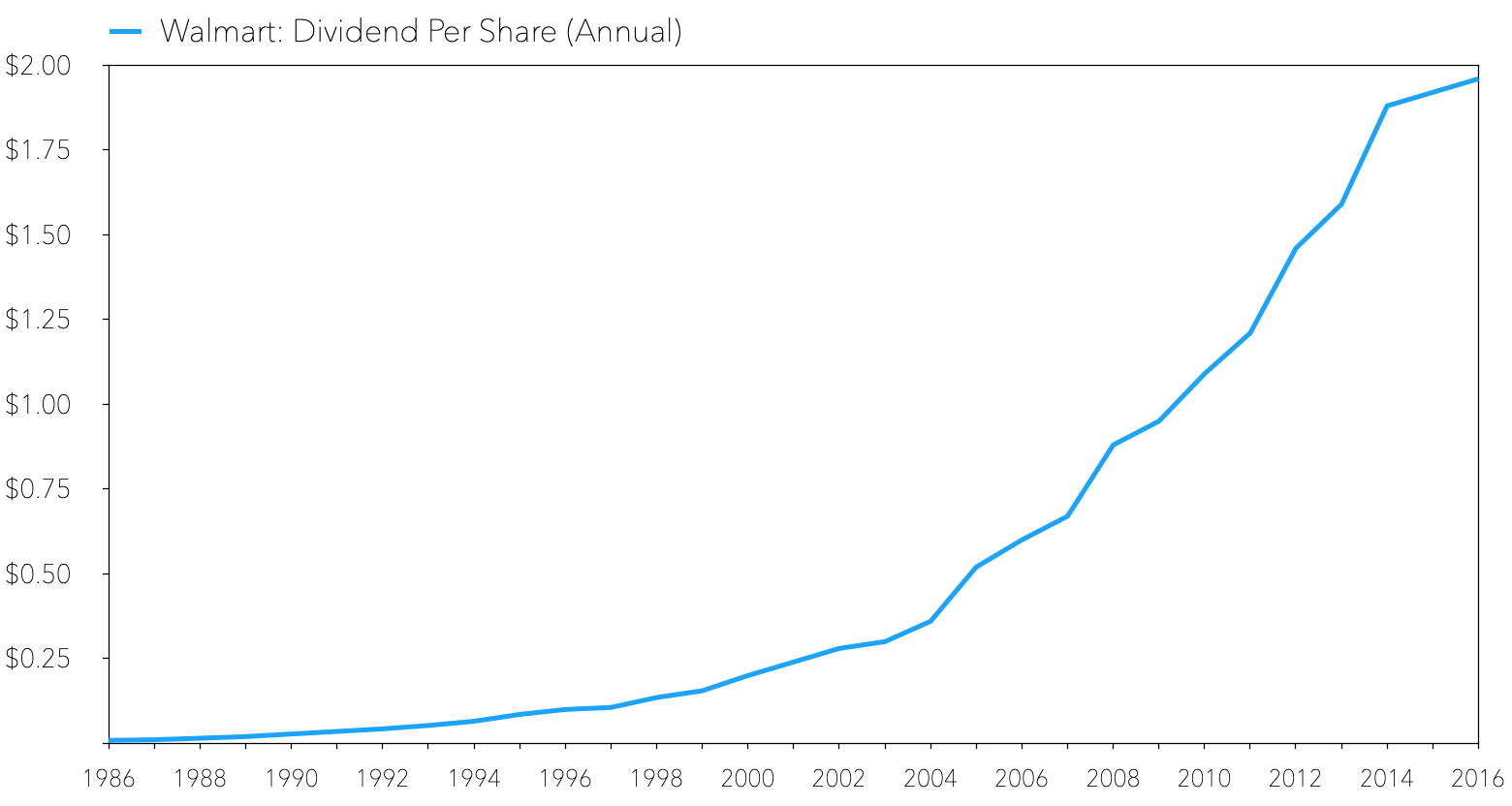 The after-inflation return factor on the $5,000 starting capital is 4.5 fold. That’s excluding the other 47 stocks and excluding the contribution of thousands of dollars in dividend cash that got paid out over the years. The 137 shares of Coca-Cola stock would generate $189 in annual dividend income this year alone. The 70 shares in McDonald’s would throw off $240.80 in annual dividend cash. Amazingly, the 1,552 shares of Walmart stock would pump out dividend income worth $3,041.

That’s just three stocks out of the fifty that we started with. That’s ignoring some great names such as Walt Disney, Procter & Gamble, Philip Morris and PepsiCo. Suffice to say, they enhanced the returns even more. Heck, it ignores all of the dividends that would have been paid over that nearly 45-year timeframe too. Of course there are some bad performers, even some total wipeouts like Kodak. Picking up a few big winners more than makes up for it.

This is partly why investors shouldn’t fear the kind of nasty bear markets that affected the Nifty Fifty back in the 1980s, or the financial crises of 2000 and 2009. As long as there is a good degree of diversification among high quality companies, the risk of permanent capital impairment is minimal.

What is also interesting is the role that value played in the subsequent returns. Nifty stocks traded as high as 60x their earnings during the bull market. Growth rates were obviously higher back then compared to today, but it shows that very high quality holdings will ultimately deliver strong returns if left for a long enough period of time. Needless to say, returns would have been magnified if investors bought even more shares when the valuations dropped in the following years.

On average, those fifty or so stocks did end up justifying their high valuations. Yes, there were a few big losers. But they were ultimately dwarfed by the big winners like Walmart. There will always be very volatile periods with equities, as any investor who witnessed the 70%-plus loses on some of those Nifty Fifty shares will know.

The overall lessons, though, are clear. Stick to high quality blue chips and ensure you are adequately diversified. Most importantly, hold for the long haul. Investors who follow those principles can still generate the substantial wealth that the original Nifty Fifty are now famous for.

McDonald’s: Returns Since The Millennium