Hershey: It’s Been A While

I last covered Hershey (HSY) back in August of last year. At the time, its shares traded at the rather lofty looking price of $153.20. That put the stock’s valuation at circa 26.5x annual earnings, with that figure based on underlying FY19 profit of $5.78 per share. For that reason, I argued that an investment in the famous chocolate company might require a little bit of patience.

A lot has obviously happened since then, but the good news on that front is twofold. Firstly, Hershey retains a solid defensive tag. It made circa $270m last quarter, and that figure was inclusive of some non-recurring items too. It still covered its $160m quarterly dividend with a health dollop of retained earnings to spare. The current quarter will obviously be a tricky one; around 23% of its sales come via convenience and drug stores, and management reckons those are the softest parts of the business in terms of COVID-19 impact. It pegged the decline from convenience stores at around 10% on the 1Q20 earnings call.

The second point to like: its stock price is down to more reasonable levels. At $130.25 per share, I have the shares at 21x previously estimated FY20 profit. It goes without saying, but that is a slightly more attractive long-term proposition than the one on offer last August.

Growth, or rather lack of it, has been a major sticking point for some investors here. The headline figures don’t immediately appear to support this. I mean, the company made $1,200m last year – some $370m more than it did five years ago. Per-share profit has increased at a higher clip as a result of stock buybacks. I have earnings per share growth coming in at circa 8.2% per annum between 2014 and 2019.

So, what’s the problem with that? I mean, it doesn’t exactly look ‘low growth’ does it? That’s true, but this mostly comes via a lower tax expense. With Hershey pretty much being an entirely US-based business, it benefited enormously from the Tax Cuts and Jobs Act of 2017. That’s the bill that lowered the headline corporate tax rate from 35% to 21%. For that reason, the stock was probably a no-brainer back in 4Q16. I mean, a forward P/E ratio of 16x for Hershey? Yeah, there’s a good chance you will do very well from that level.

Debt is another thing I’ve seen raised as a concern here. It’s true that the company has taken on more leverage in recent times, though it’s hardly a scary amount. I have total debt at just under $5,100m, or $3,985m net of the company’s cash pile. Based on Hershey’s current level of cash generation, it could clear that in under six years (if it wanted too, though its debt is very cheap) via post-dividend free cash flow.

Anyway, take taxes out of the equation, and growth doesn’t look nearly as good. I’m not so worried about that so long as the business remains an absolute profit machine generating relatively large amounts of retained income. For instance, reported net income earned over the past five fiscal years clocks in at $4,300m on a cumulative basis. The company paid out a total of $2,600m via cash dividends to stockholders over that period, leaving 40% of its net profit left over. 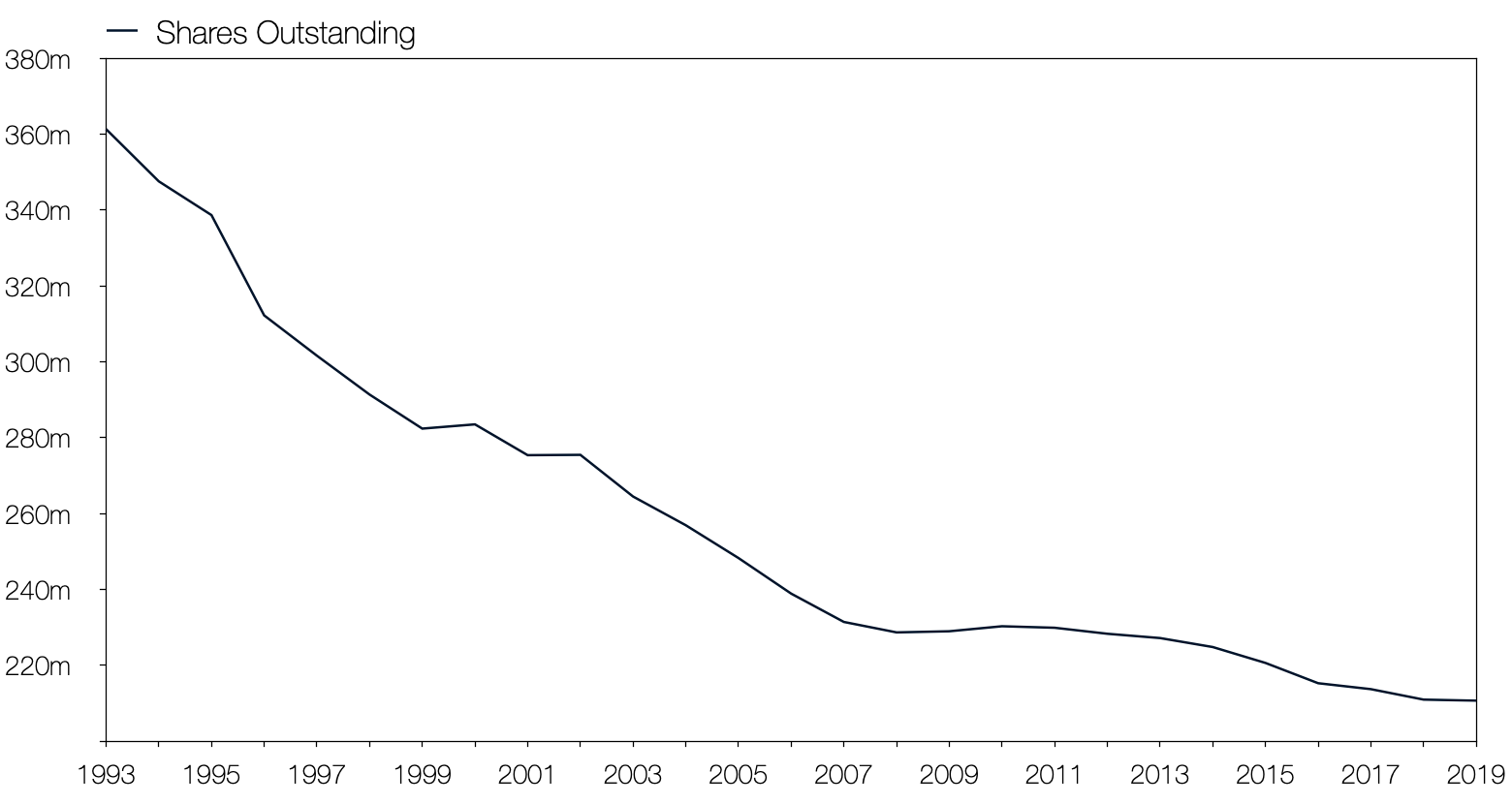 This is the beauty behind an investment in something like Hershey. It doesn’t show up when you just look at the retained earnings line on its balance sheet, but that’s because it retired almost 140m treasury shares last year. This thing has generated billions of dollars of post-dividend retained profit down the years.

Speaking of treasury shares, buybacks have been an integral part of the shareholder returns story here. I have Hershey retiring around 40% of its share count going back to the early-1990s. Quick math puts the contribution to earnings per share growth from stock buybacks at around 2.75% per annum during that period .

That brings us to situation going forward. COVID-19 is clearly a short-term blip to the business, but I’m not sure this lasts longer than a quarter or two as far as Hershey is concerned. It has withdrawn 2020 guidance, which initially pointed toward circa 3% revenue growth and circa 7% earnings per share growth, though management reaffirmed long-term targets in the same area. On that basis, I think Hershey stock is probably reasonably valued right now.

To put some color on that last statement let’s go with management’s low-end target. At 6% average earnings per share growth, Hershey could easily afford to bump its dividend by an extra percentage point per annum. It would still pay out less than 65% of profit after twenty years at that rate – fine for a stable defensive company. Reinvesting that income stream at the prevailing yield gets you close to a double-digit income compounder. For someone looking for a longer-term investment, that strikes me as just about okay for such a conservative business.

Very nice write up about HSY. The metrics are not quite there for me to invest today, unfortunately. The P/E ratio is slightly too high and the yield isn’t high enough. Their debt is concerning to me. But maybe that is my distaste for debt after seeing so many dividend cuts from companies with high debt. The one big positive is that I love the company, their product, and the industry they dominate.

Thank you! Yes, it doesn’t look very compelling at this level, but I think it will do okay long-term. Its debt is very manageable, I don’t expect any issues there at all.