written by The Compound Investor August 3, 2019

Without doubt the big story in the media space last year was Disney’s $70 billion purchase of 21st Century Fox. Indeed I think I’m right in saying that it was one of the ten largest deals of the decade across all sectors of the market. Much of the post-deal focus has been on Disney’s side of things; unsurprising when you consider the sheer scale of the enlarged Disney’s asset base. That said the rump of Fox left behind, now listed as Fox Corporation (NASDAQ: FOX, FOXA), is a pretty interesting company in its own right (and possibly worth a look for blue chip hunters).

What stands out with Fox is how the asset base revolves almost entirely around live programming like news and sports. The major money spinner is the Fox News Channel, followed by the various Fox cable sports channels. The Fox Network and the 28 regional Fox Television Stations make up the rest of the asset stable.

When you consider that many media investors are terrified of the likes of Netflix ruining their stock’s underlying business model these are good assets to own. Why? Well, consider how Fox makes its money. Generally speaking it generates half its revenue from affiliate fees and the other half from advertisements. (Affiliate fees are the payments that TV-service providers such as cable companies pay to Fox in order to show its channels to subscribers). Television assets susceptible to having their viewership stolen by Netflix will see both of those revenue streams suffer. The kind of ‘live’ content pumped out by the Fox News Channel, or the Fox Business Network, or NFL on Fox is inherently more immune to ‘on-demand’ shifts. 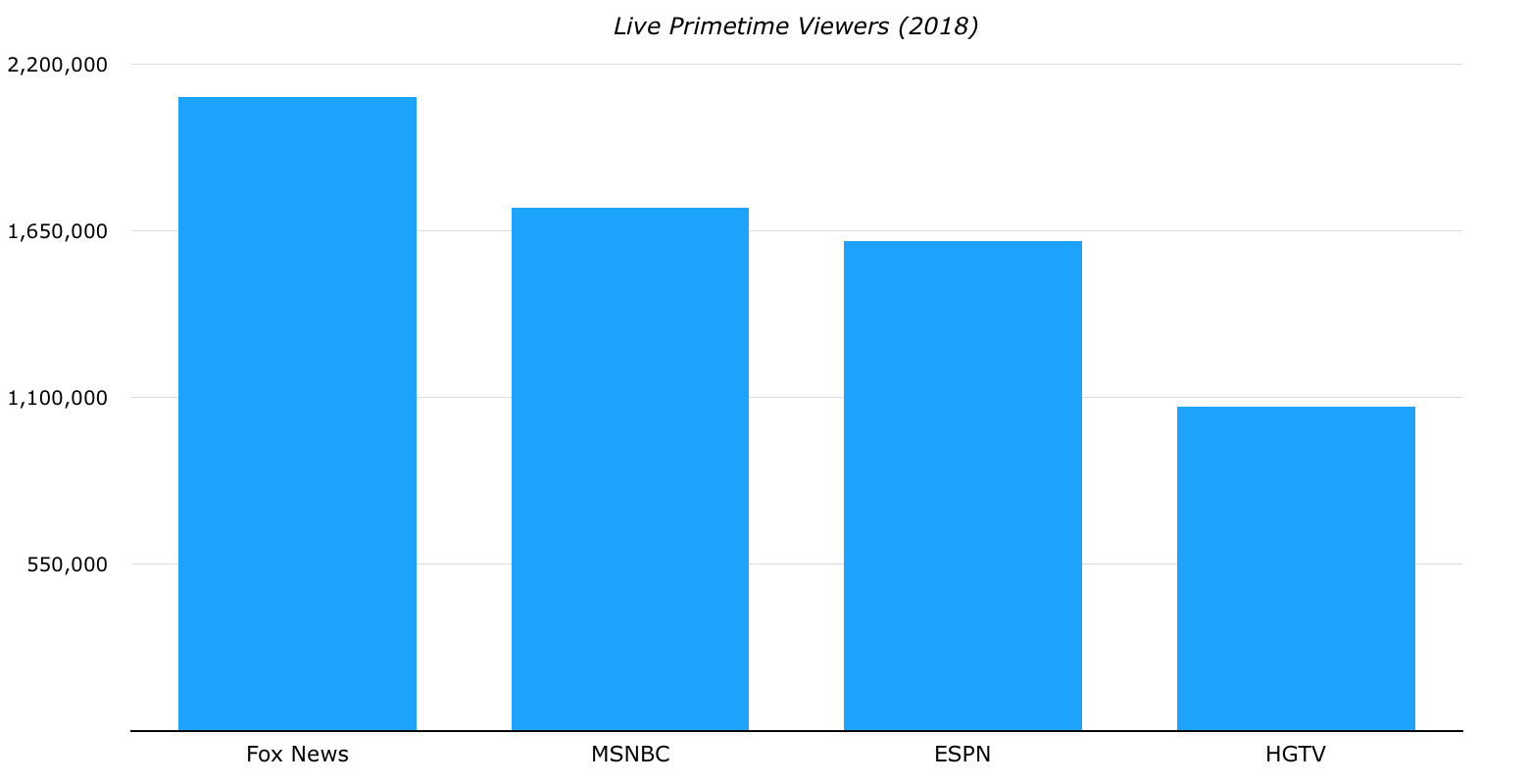 The Fox News Channel in particular is the company’s stand-out asset. It is, quite simply, a money spinner. According to some analysts it will generate around $2.75 billion in combined affiliate fee and advertising revenue in 2019, almost a quarter of company total. Not only it is popular with viewers – 8pm to 11pm EST (“prime-time”) draws around 2-2.5 million on average – but Fox owns the content outright. Said content is also relatively cheap to produce. I mean prime time shows like Hannity or Tucker Carlson Tonight bring in a few million views each night on average with the only major cost being the wage bill of the host. Fox doesn’t break down the Fox News Channel’s finances but it wouldn’t surprise me if it was responsible lion’s share of total company profit.

Sports broadcasting is the other money maker for Fox. As with Fox News the big plus point is that this is real time, live unscripted content. In other words the traditional TV set-up retains a decent grip on sports vans. The upshot: affiliate fees and advertising remain fairly solid.

Just to illustrate that final point take a look at this snippet of advertising data from Fox. Back in 1998 an advertiser purchasing one ad-unit in one episode of every comedy and drama nominated for an Emmy Award was buying themselves around 330 million ad-impressions. That is to say its advertisements would have shown up 330 million times on TV screens across the USA. By 2018 that figure had collapsed to just over 30 million. Sports viewing, on the other hand, has held up fairly well. In 1998 an advertiser buying one slot in twenty major sporting events was buying himself around 465 million impressions in total. By 2018 one slot in the same twenty events still generated over 435 million impressions. 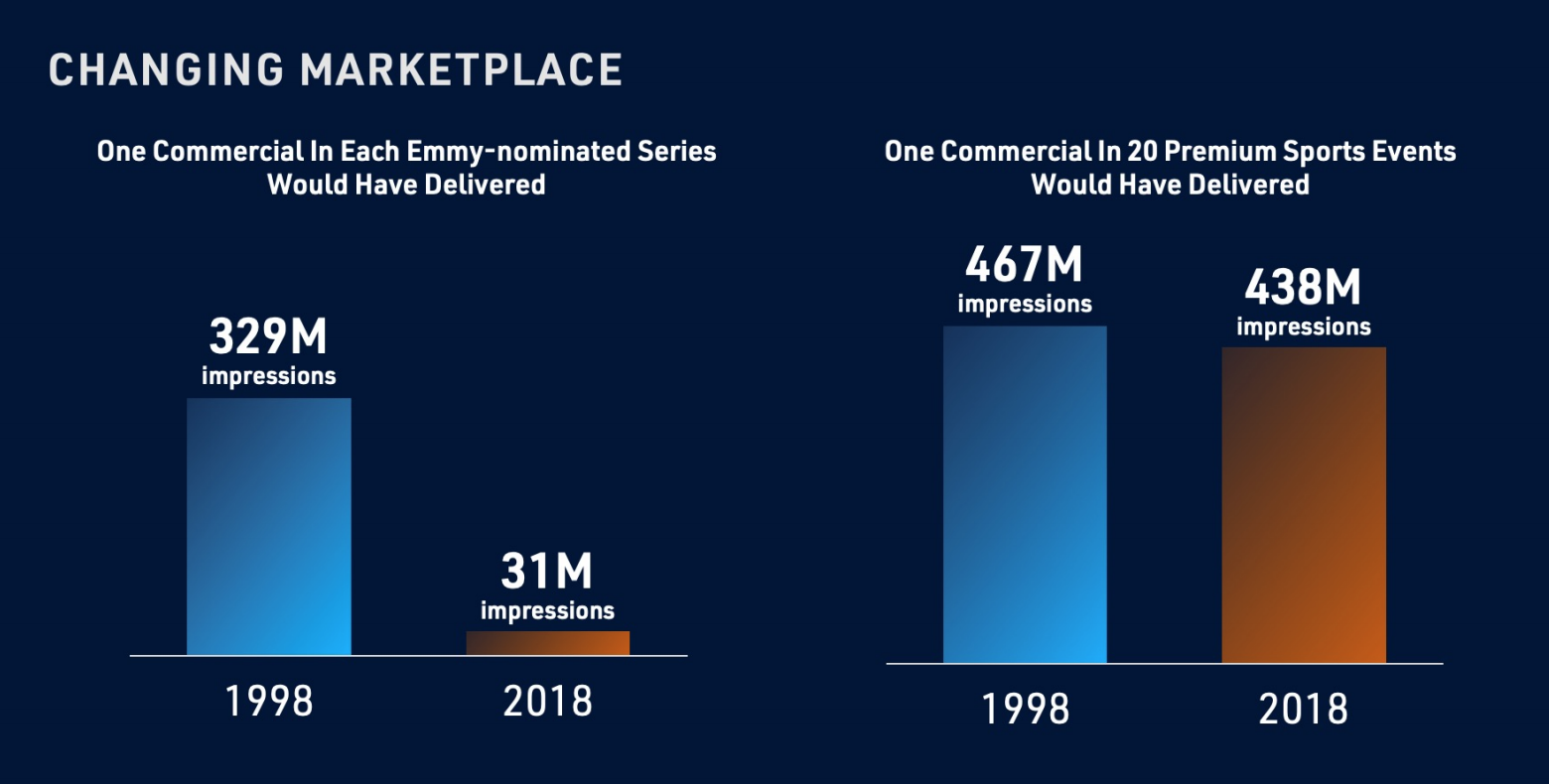 That only real downside to live sports broadcasting is that the content is owned by a third-party, which means that Fox has to pay in order to license it. Not only that, but sporting broadcast rights are expensive. For instance programming costs take up around 75% of Fox’s total expense bill. Sports take up around two-thirds of said programming costs. In other words almost half of the company’s entire expense bill rests on the costs associated with sports programming.

In the first three months of 2019 the company generated total revenue of $2.75 billion. 20% of that, or $530 million, ended up as after-tax net profit for Fox’s stockholders. The company is a cash cow, plain and simple.

As it stands the shares are trading for around $36 apiece. If my numbers are correct then the market is valuing Fox’s equity at around $22.5 billion. The company also has around $4 billion worth of net debt on the balance sheet, so let’s call Fox’s total enterprise value $27 billion. Backing that up is around $2.5-$3 billion worth of annual EBITDA.

Ordinarily you’d be hesitant to call an EV/EBITDA ratio of 9 particularly cheap. That said there are a couple of mitigating circumstances here. Firstly, the earnings quality is extremely high and justifiably worth a premium. Secondly, the balance sheet is in good shape. (Those two points together imply stocks buybacks and acquisitions are on the table). Finally, the new company is exhibiting some decent growth. Both EBITDA and net profit grew in the mid-to-high single digit range compared to 2018. Given how hard it is to find any value in the blue chip space, paying $36 for a stock (with $6.50 per share in net debt) that could well earn over $3 per share next year doesn’t strike me as too bad a deal.