As far as this site is concerned, boring is great. Even more so when it comes to bank stocks. Unfortunately, they often don’t fit that mould. It is far easier for a bad management team to ruin a bank than it is to ruin a Coca-Cola, and I’d wager that a few of the site’s readers won’t touch them for that reason. On that note, I’d like to introduce you to this neat little stock – Farmers & Merchants Bank Of Long Beach (FMBL).

This particular bank has a very cool history. It starts back in the Knickerbocker Crisis of 1907, when a combination of events basically led to good old-fashioned bank runs nationwide. Charles J. Walker, the man who would go on to found the bank, was faced with the prospect of satisfying anxious depositors in Long Beach, California. Armed with a police escort, he had circa $500,000 in gold bullion and coins transported to the First National Bank, of which he was a director. Walker personally assured the bank’s depositors that he would satisfy their withdrawals in gold, if they so wished.

Walker went on to open Farmers & Merchants Bank Of Long Beach around a month after that. A century on, and you can see that the ethos hasn’t really changed much here. Indeed, this is still very much a family affair. Members of the Walker family own a big chunk of stock, and the bank is very conservatively run. It has also notched up well over 500 consecutive dividend payments according to its most recent annual report.

As mentioned above, this is a pretty tiny company compared to the stuff that usually gets covered on the site. The bank runs twenty-five branches in Southern California, and sports around $7,950m in total assets on its balance sheet. Compare that to Wells Fargo – the last bank covered on the site – which currently has circa $2,000,000m in assets. That said, and given how conservatively it is managed, I don’t think Farmers & Merchants Bank Of Long Beach is out of place on the site. 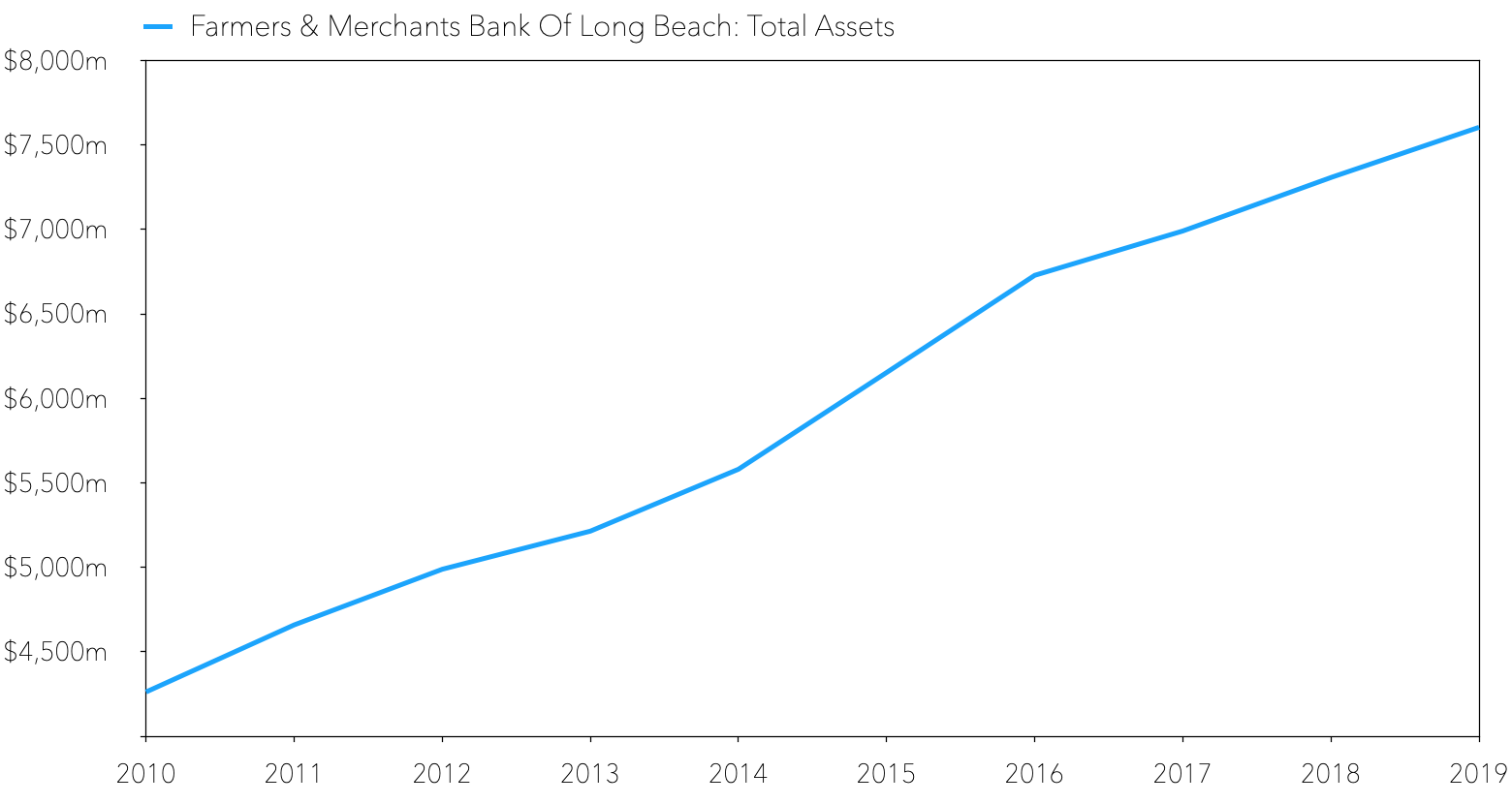 Anyway, let’s delve a little deeper into the bank. According to its website, the value of its loan book clocked in at circa $4,400m at the end of 1Q20. Most of that is in commercial real estate and residential mortgages. It set aside $800,000 for bad debt in the quarter, with that figure standing against pre-provision net interest income of circa $61m. All said and done, the bank still reported total net income of $18m last quarter. That was around $4m lower than it earned in the equivalent period last year.

A lot has obviously happened since last year. The COVID-19 induced downturn needs no further commentary, while interest rates have also tanked. Nearly all of its net revenue generation comes from net interest income, but it still managed to sport a net interest margin of 3.28% last quarter. Granted, this quarter will probably be much worse than the last one, though the bank is absurdly well capitalized. Its CET1 ratio clocked in at 19.65% at the end of 1Q20, while its leverage ratio came in at around 14%. I think this one will be around for a while.

From reading the above, I think you could safely say that this must be one of the safest banks in America. (Its slogan is “California’s Strongest, Since 1907”, though I think you could make a case to extend this nationwide). This, plus the fact that its shares trade over-the-counter, makes it an intensely boring stock. Liquidity is almost non-existent here in terms of trading. If you buy it, it is probably because you want to own an ultra-conservative bank stock for the long haul.

On that note, we get to its current valuation. The bank looks pretty darn cheap to me. A quick look at its history suggests it manages to make returns of circa 1.1% on its assets. Let’s lower that a notch, just to err on the side of caution, and put normalized earnings power in the $80m per annum area. I make that equivalent to around $625 per share based on circa 128,600 shares outstanding. The current stock price is $5,875 – down around 25% year-to-date. Quick math therefore puts it at around 9.4x annual earnings. The current share price is also well below tangible book value of circa $8,400 per share.

The bank is also a pretty reliable dividend payer. Any bank stock that kept its distribution steady during the last financial crisis is a good one, and Farmers & Merchants Bank Of Long Beach passes that particular test. The current ordinary quarterly distribution stands at $27 per share, which only works out to a yield of circa 1.8% on an annualized basis. Not much to write home about, but it only pays out a fraction of its profit. I think it can afford to bump that up a bit, though it does typically pay a special dividend each year too. That brought last year’s payout up to the $123 per share mark. There is also a $20m stock buyback program in play.

Here’s the thing. This is very much a slow and steady stock – total assets have grown at circa 6% per annum on average over the past decade or so. That’s more than okay when you trade at 9.4x annual earnings. On that basis, I expect the shares to generate double-digit annual returns from this level. If you want an ultra-conservative and boring bank stock, then you may want to give Farmers & Merchants Bank Of Long Beach a closer look.

Reminds me a bit of Bank of Granite, which was a Buffett favorite, until the founder stepped down and new management went on an ill advised expansion spree.

Ah yes, I remember reading about that one a few years back. Clocked up fifty odd years of consecutive dividend payments as well. All lost.