As I type, authorities in China have placed tens of millions of people in a de-facto state of lockdown in an effort to contain the spread of a novel coronavirus. Shops have been shuttered, public transportation cancelled and even the Shanghai Disney Resort has been closed. The price of oil has also been hit hard, which is hardly surprising given the dampening effect this will have on economic activity in the world’s second largest oil consumer. As I type, Brent crude trades for just under $59 per barrel, down around ten dollars per barrel on where it started the year.

As you’d expect, this has done nothing to boost Exxon Mobil’s (XOM) flagging stock price. In fact the stock just closed below the $64.75 per share mark as I type, down some 2.4% on the day. By my count, Exxon shares are actually lower than they were during the early-2016 lows. That was when the price of Brent crude oil was around $28 per barrel. Though I don’t have precise data to hand, I think the current $64.74 stock price may be among the lowest since 2010. By way of comparison the S&P 500 has pretty much trebled over that timeframe.

That statistic is eye-opening for a couple of reasons. First, it is obviously not great news for Exxon Mobil stockholders from a capital appreciation point of view. Although commodities have their own cycles, Exxon shares have basically missed out on the greatest equity bull market of all time. Secondly, take a look at the dividend situation. At this point in 2010 Exxon Mobil paid out a quarterly dividend of 42¢ per share. Today the figure stands at 87¢ per share. Based on the current stock price, Exxon is now shipping off 1.35% to stockholders every three months.

Unfortunately it is the first point that tends to catch the attention of the investment community. Check out Exxon Mobil articles over on Seeking Alpha, for instance. They now run to hundreds of comments, many of them bemoaning the stock’s lackluster decade. In my view this is short-sighted given how much Exxon plans to invest in its capital spending program. I mentioned this briefly a couple of months ago, but the numbers are staggering. This year the figure will clock in around the $35,000m mark. After that, the oil giant plans to spend anywhere between $30,000m and $35,000m per year out to 2025. 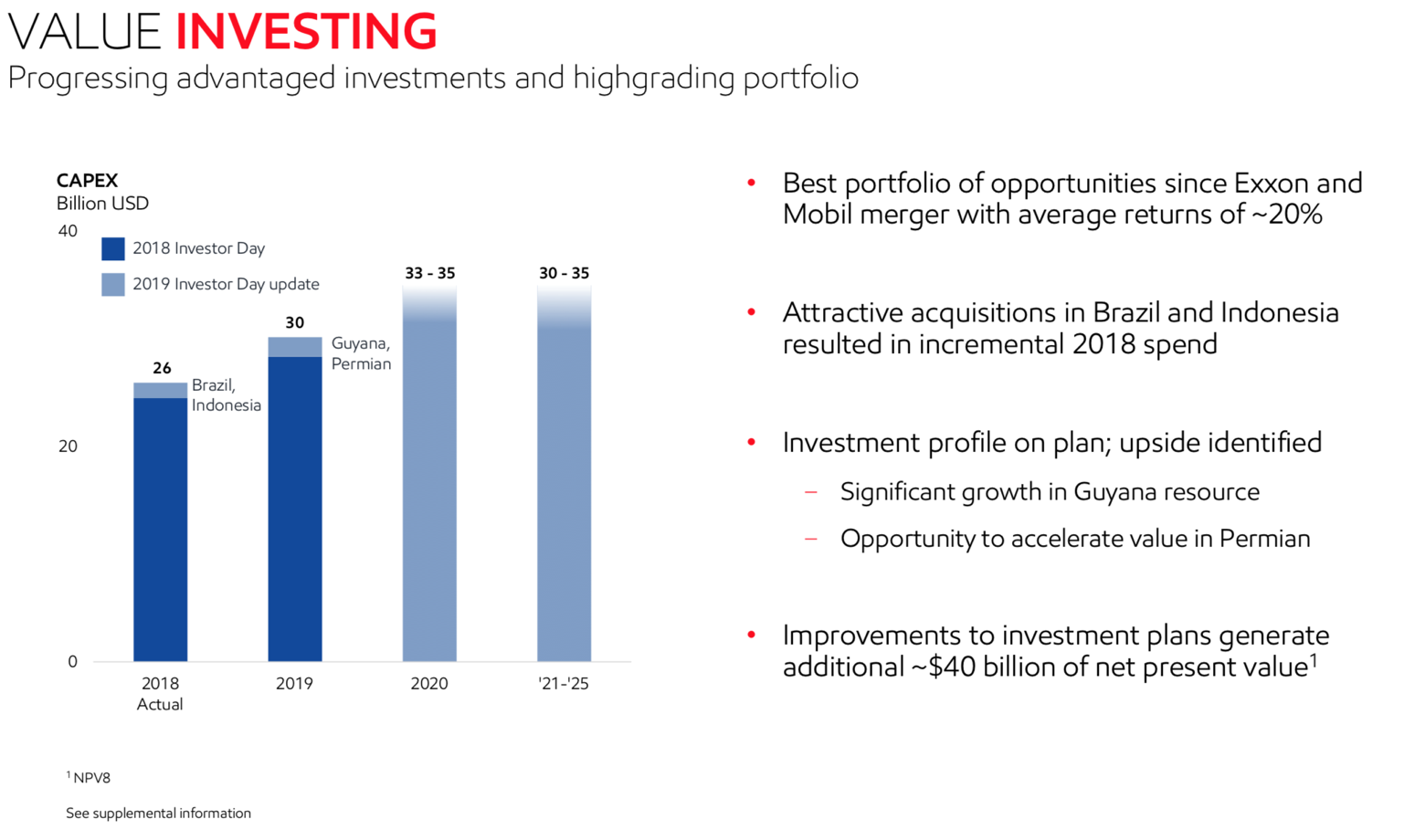 To give those figures some context, they represent a circa $15,000m per annum step up from the $17,000m Exxon was spending per year (on average) between 2016 and 2018. That is absolutely phenomenal. Just to provide some further context, the annual depreciation bill runs at somewhere in the $20,000m range. Or put another way, Exxon is investing for growth in a big way. We are talking tens of billions of dollars in incremental growth CapEx here.

As mentioned in the November article this investment will be spread right across the spectrum of Exxon’s empire, from new oilfields in Guyana and Texas, right the way to new chemical plants and refineries. If you just focus on the Upstream operations, we are looking at around 1,000,000 barrels per day in incremental production by 2025.

This is where it gets interesting for those prepared to take a medium-term view on the stock. Exxon’s $60 per barrel oil price scenario (real terms, 2017 prices) will see the company generate total free cash flow of $190,000m over the 2019-to-2025 period. Based on 2018 dividend spending levels (~$14,000m per annum), around $100,000m of that figure gets earmarked for cash dividends. Just think about that for a moment. We are potentially looking at around $90,000m in surplus cash. That could annihilate the current net debt level (~$40,000m) while leaving $50,000m for stock buybacks. At the current stock price that would be enough to retire almost 20% of outstanding shares. 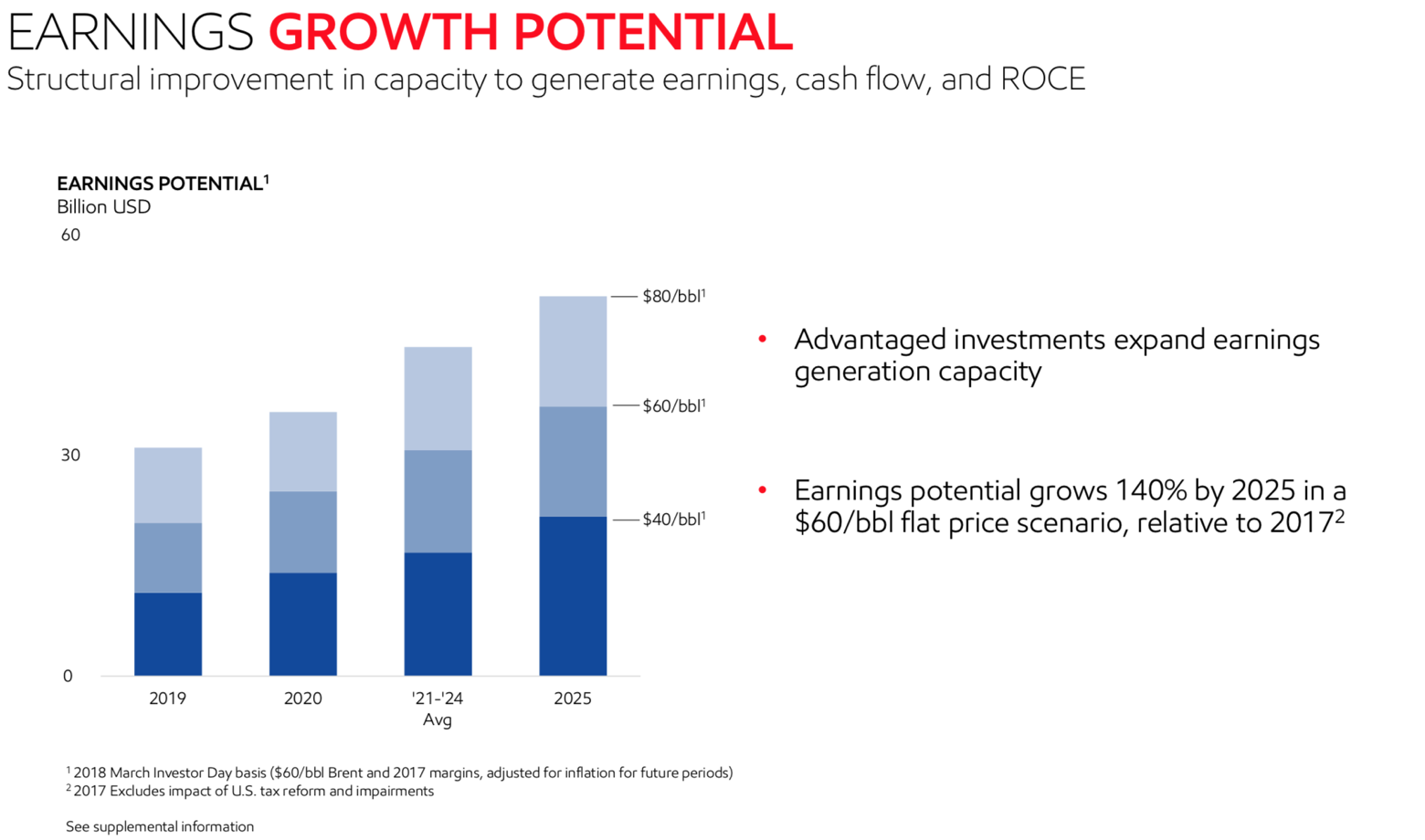 The implications of all of this with respect to the current stock price are eye-opening. Realistically, it means we could be looking at around $40,000m in annual free cash flow by 2025. That is equivalent to almost $9.50 per share based on the current 4,270m share count. All other things being equal, Exxon will trade comfortably over the $100 per share mark by that point, and my guess is that folks will look back at the current dip as a great long-term entry point.