Exxon Mobil: Shareholder Returns Out To 2025

Exxon Mobil (XOM) is copping a lot of flak from investors right now. An awful lot of folks out there don’t appreciate the fact that the stock price hasn’t done anything for more than a decade. Compare that to its peer Chevron, which has put on over 50% in capital appreciation – not to mention the boat load of cash dividends paid out on top – in that time. A cursory “side by side” analysis would suggest that Exxon has seriously underperformed. Putting the merits of that statement aside, I’d go out on a limb to say now is not a bad time to pick up the stock for long-term oriented investors.

Financial numbers year-to-date don’t paint a pretty picture. First, earnings and cash flow are down in what is obviously a tougher macro environment compared to 2018. In its fiscal third quarter the company reported earnings of $3,170m, down a massive 49% on the $6,240m made in 3Q18. For the nine-month period (i.e. year-to-date), earnings clocked in at $8,650m versus almost $15,000m at this point last year. As far as I can see that relative performance is the worst out of the “big five” oil majors.

Unsurprisingly, the chief driver of that has been the decrease in oil and natural gas prices. In the third quarter Exxon realized an average liquids price of $54.51/bbl in the United States. At the same point last year it realized an average price of $64.06/bbl in the US. Natural gas followed an even steeper downward trajectory, down over 25% in 3Q19 year-on-year. The company reckons lower liquids prices hit profit by ~$1,500m in 3Q19 versus this point last year.

A couple of other points to note. First, earnings in Exxon’s other operating segments are weaker too. For example, Downstream profit is down around $2,000m so far in 2019 versus last year. Its chemicals business is down around $1,500m on the same basis. Second, Exxon has ramped up capital expenditures at the same time as cash flow has weakened. The company spent $7,719m on CapEx in 3Q19, around 17% higher than the $6,586m spent in 3Q18.

The upshot is that free cash flow is being squeezed big time. Over the first nine months of the year the company reported cash flow net of CapEx of around $4,500m, not even enough to cover the dividend. Needless to say that is not what we expect to see from Exxon given all of the other majors are safely covering their distributions in the current environment.

The good news is the company isn’t increasing its CapEx for no reason. In its Upstream division it has five big strategic projects in development: the Permian Basin in Texas; offshore Brazil; offshore Guyana; Mozambique LNG; and Papua New Guinea LNG. The company see Upstream CapEx over 2019 and 2020 coming in at around $48,000m.

The LNG projects in Mozambique and Papua New Guinea decent returns at natural gas prices equal to around $5/MBtu. Likewise, oil production in the Permian, Brazil and Guyana make money at prices well below $50/bbl. At $60/bbl Brent (2017 price, inflation adjusted) the company reckons they will help contribute to an incremental $7,000m in annual profit by 2025.

In addition, Exxon is spending another $17,000m over 2019/2020 on investments in its Downstream and Chemicals units. Total CapEx spend over the two-year 2019/2020 period is expected to total around $65,000m – way higher than the current rate of depreciation. In other words, the underlying cash generating ability of the company is not currently reflected in the cash flow numbers. A “steady-state” Exxon, spending enough to keep operations ticking over, would throw off more than enough cash to cover its dividend.

Long-term followers of Exxon will probably be aware that the current 5% dividend yield is historically interesting. In fact as far as I can see it represents a near twenty-year high. Granted, stock buybacks don’t form part of the shareholder returns equation as they used to, but when Exxon offers up 5% of your investment in hard cash in the first year you tend to sit up and take notice. 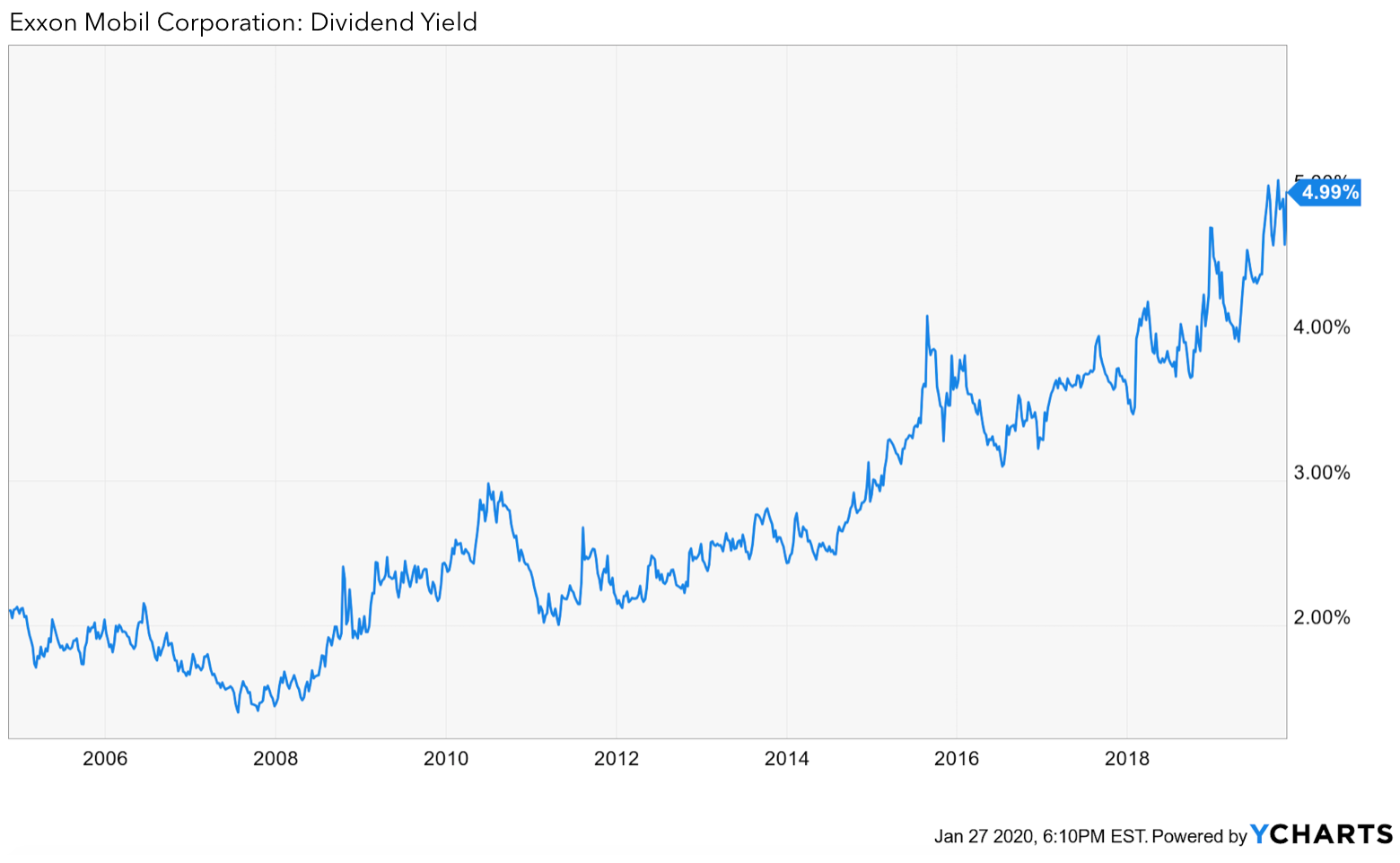 Given how much profit the company thinks it can throw off at $60/bbl oil I’d say that makes for an interesting value proposition. According to its projections, Exxon will generate over $30,000m worth of annual net profit by 2025 as a result of the investments it is making now. Based on the current share count that would put earnings per share at around the $7.15 mark by the middle of next decade. Slap a 15x multiple on that and you end up with a share price north of $105. I’d expect Exxon to pay out a further $25 per share in dividends through 2025 on top. That strikes me as a decent deal for a stock currently trading below $70 a share.