written by The Compound Investor December 15, 2019

Last week The Walt Disney Company (DIS) declared a semi-annual dividend of 88¢ per share, unchanged year-on-year. Since Disney switched to paying twice-yearly back in 2015 (as opposed to one annual distribution) the December one has always represented the “raise”. In other words it looks increasingly likely that Disney’s fiscal 2020 (remember its financials run on a September to September calendar) will not see a rise in the annual dividend. Granted, it could raise its payment in July, but don’t bet on it. Assuming no change next summer means 2020 would represent Disney’s first annual dividend freeze since back in 2009. 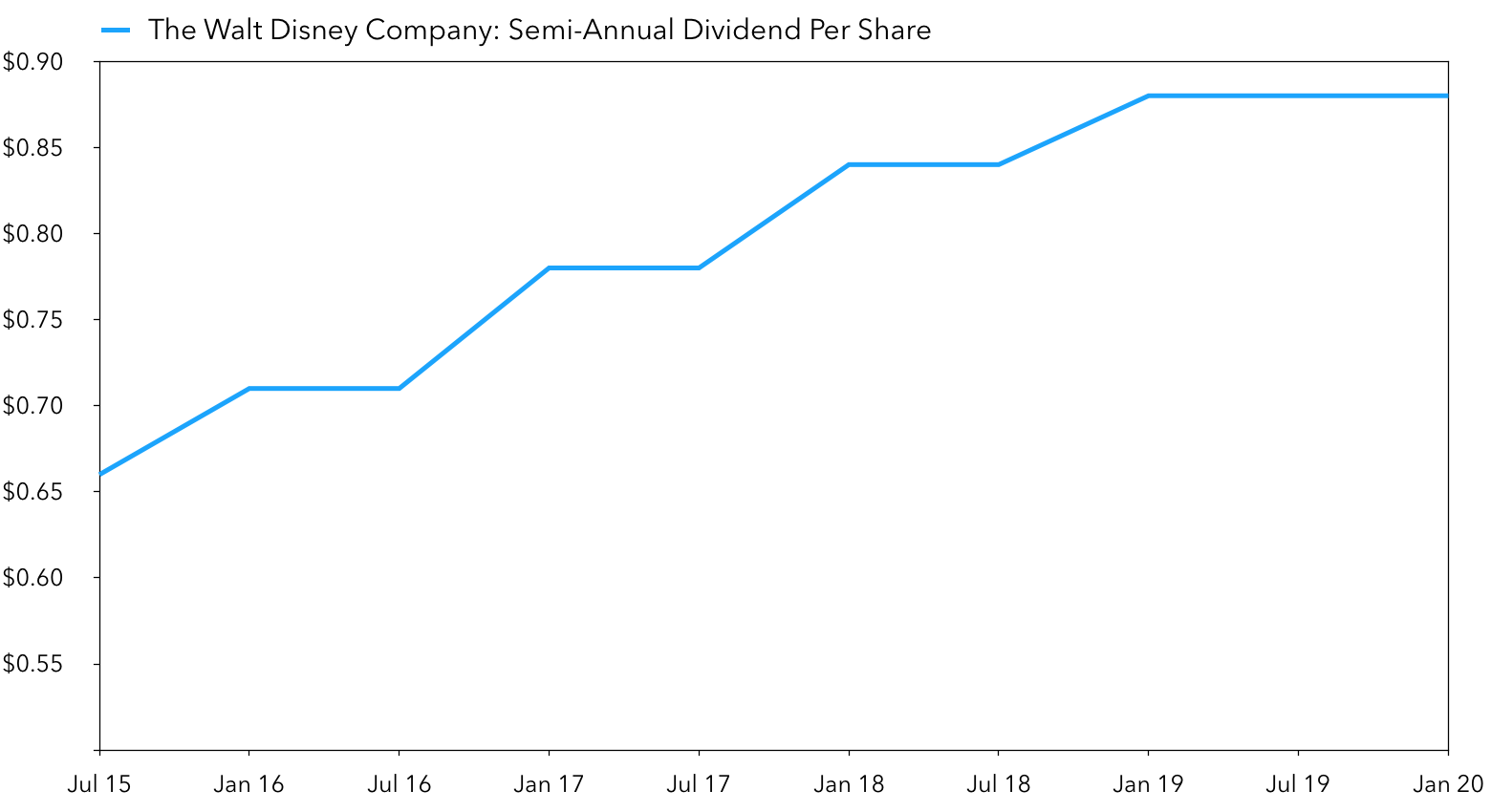 Truth be told I was slightly surprised by this. Judging by the reaction on financial media sites it seems I was not alone. (Like a lot of folks I expected a token dividend bump in the low single-digit range). That said, Disney taking a pause on the dividend growth front makes sense. In fact there are probably two things driving that decision by management, and I’ll touch on both briefly below.

Net Debt After The Fox Deal

Unsurprisingly the circa $70,000m acquisition of the lion’s share of 21st Century Fox has stretched Disney’s finances a little. As it stood at the end of September the company reported total borrowings of around $41,500m net of its $5,500m cash pile. The bad news is that a big chunk of that debt is due within the next twelve months – roughly $8,850m as of the end of September to be a bit more precise.

In terms of cash inflow, Disney generates somewhere in the region of $10,000m in annual free cash flow as things stand right now. Even after backing out the $1.76 per share annual dividend commitment (worth circa $3,200m per annum in cash terms), it’s clear that the business throws off plenty of surplus cash. Quick math suggests Disney could eliminate its entire net debt position in around six years should it so choose.

On that note significant debt reduction is easily achievable. The bad news is Disney needs pretty much all its excess cash generation to meet near-term maturities. So why doesn’t it just refinance its debt? Well, the short answer is that management is committed to keeping Disney’s current credit rating. That requires debt to come down to around 1.75x EBITDA, which Disney will achieve in 2020 if it pays off those short-term debt maturities from excess free cash flow. For that reason the dividend freeze makes strong financial sense.

The 21st Century Fox deal comes at an interesting time for Disney. As most readers will probably be aware the company recently launched its much anticipated streaming service, Disney+. That now sits alongside existing direct-to-consumer products such as ESPN+ and Hulu.

Now, in all honesty, streaming could present something of a double-edged sword for the company. On the plus side it has two potential things going for it. Firstly, and most obviously, it represents a new revenue (and potential profit) stream in its own right.

For instance, by the end of fiscal 2024 the company expects somewhere in the region of sixty to ninety million global Disney+ subscribers. Assuming they each pay the full $6.99/month subscription price (too optimistic but let’s go with it for the sake of simplicity), that creates a revenue stream worth several billion dollars a year at the low end. Even after subtracting expenses that should result in a profitable new business line for Disney.

Secondly, Disney+ can drive consumer dollars to other parts of its business. Imagine a new movie based on Disney+ content, or a new line of toys hitting its retail stores. Indeed as far as Disney management is concerned this is probably the bigger prize.

On the flipside there are two potential issues as far as I can see. First, streaming undoubtedly eats in to existing lines of (very) profitable business. For instance, cable channels like Disney Channel (which has around 225 million global subscribers) are bound to take a hit. If folks start consuming that content via Disney+, what happens to the advertising revenue and affiliate fees paid by pay-TV providers? Most likely that money source gets eroded.

Similarly the money that Netflix (and other third-party streaming services) pays to license content also gradually disappears as Disney takes its content to its own service. Bear in mind this is a multi-billion dollar revenue stream for the company, and at a 100% gross margin to boot.

Second, it will obviously take a few years for Disney+ to reach its subscriber targets. In the meantime it loses money for Disney on a standalone basis. Alongside losses from the other streaming ventures – i.e. ESPN+ and Hulu – the hit could be worth a few billion dollars per year.

So, the short version is that Disney has some chunky debt repayments just as it enters a period in which new ventures may take a chunk from its bottom line. Given how strong the profit machine is Disney can take that in its stride fairly comfortably. That said, it will have an effect on the shareholder returns program. Over the past five years Disney has spent a cumulative total of around $38,500m on dividends and stock buybacks. Needless to say buybacks look completely off the table for a while. Furthermore I would expect modest dividend growth to only resume in fiscal 2021.

Disclosure: I own shares of The Walt Disney Company held with the company’s transfer agent.

The Case For Comcast Stock

AT&T: Debt Reduction Should Lead To A Rerate