Things look crazy out there. Whole industries: commercial airlines, hospitality and so on, look like they could go to the wall absent bailouts. Remember that Wendy’s piece I published when it was trading at $22? That was just two months ago. The stock now trades for under $11 a share. Meanwhile, Walmart stock hit an all time high earlier this week. Bizarre times.

I figure I will stick to defensive stocks offering good long-term entry points right now. I covered Molson Coors a few days back, and today Discovery (DISCA) popped up on my radar. On the face of it, the owner of pay-TV channels like Discovery Channel, TLC and Food Network may seem an odd choice. I mean a bunch of revenue obviously comes from advertising, which is usually one of the first things to see cutbacks in a recession.

The above notwithstanding, I think Discovery will prove a less turbulent option. For one, it held up really well during the global financial crisis. It generated $1,428m worth of ad-revenue in 2009, up around 2% on its 2008 level. Gross profit for the year came in around 1.3% higher than in 2008. That does not look as cyclical as I expected it to. In fact, and if you only looked at Discovery’s numbers, you’d struggle to see the recession there. Compare that to the experience of CBS Corporation over the same timeframe. CBS generated around $8,170m in terms of advertising revenue over the course of 2009. That was $1,050m lower than in 2008, and around $1,900m lower than in 2007.

So, how to explain those contrasting fortunes? Well, if you are in control of a marketing budget, and the guys upstairs tell you to cut it by 20%, what would you do? Indiscriminately slash across the board, or focus resources on prime slots? My guess is that Discovery’s assets are among the most valuable to advertisers in the entire media industry. That’s why it held up well last time we had a dire economy. Obviously we can’t simply extrapolate that to the current situation. I mean there are unique uncertainties here. For instance, the 2020 Summer Olympics, which Discovery has broadcast rights to in Europe via its Eurosport channels, is currently up in the air in terms of whether it will even go ahead.

These days, Discovery is a much bigger business than it was just over a decade ago. Its acquisition of Scripps Networks Interactive in 2018 gave it ownership of cable channels such as Food Network, Travel Channel and HGTV. Of the $11,144m in revenue that the enlarged Discovery generated last year, $6,044m came from the sale of advertising slots on its channels.

The remainder came from what the company calls ‘distribution’. Essentially, this is composed of the fees that pay-TV providers (e.g. cable and satellite-TV companies) pay in order to be able to show Discovery’s channels to consumers. This ought to be less choppy than advertising revenue as contracts typically run on a multi-year basis.

Anyway, here’s the thing: $3,000m of that $11,144m headline number ended up as cold hard free cash flow. The business is an absolute money spinner. Furthermore, Discovery has no dividend obligation. Now, the lack of a distribution here irks some people, myself included. However, it does mean that the company could use all of its free cash generation to bolster its balance sheet. 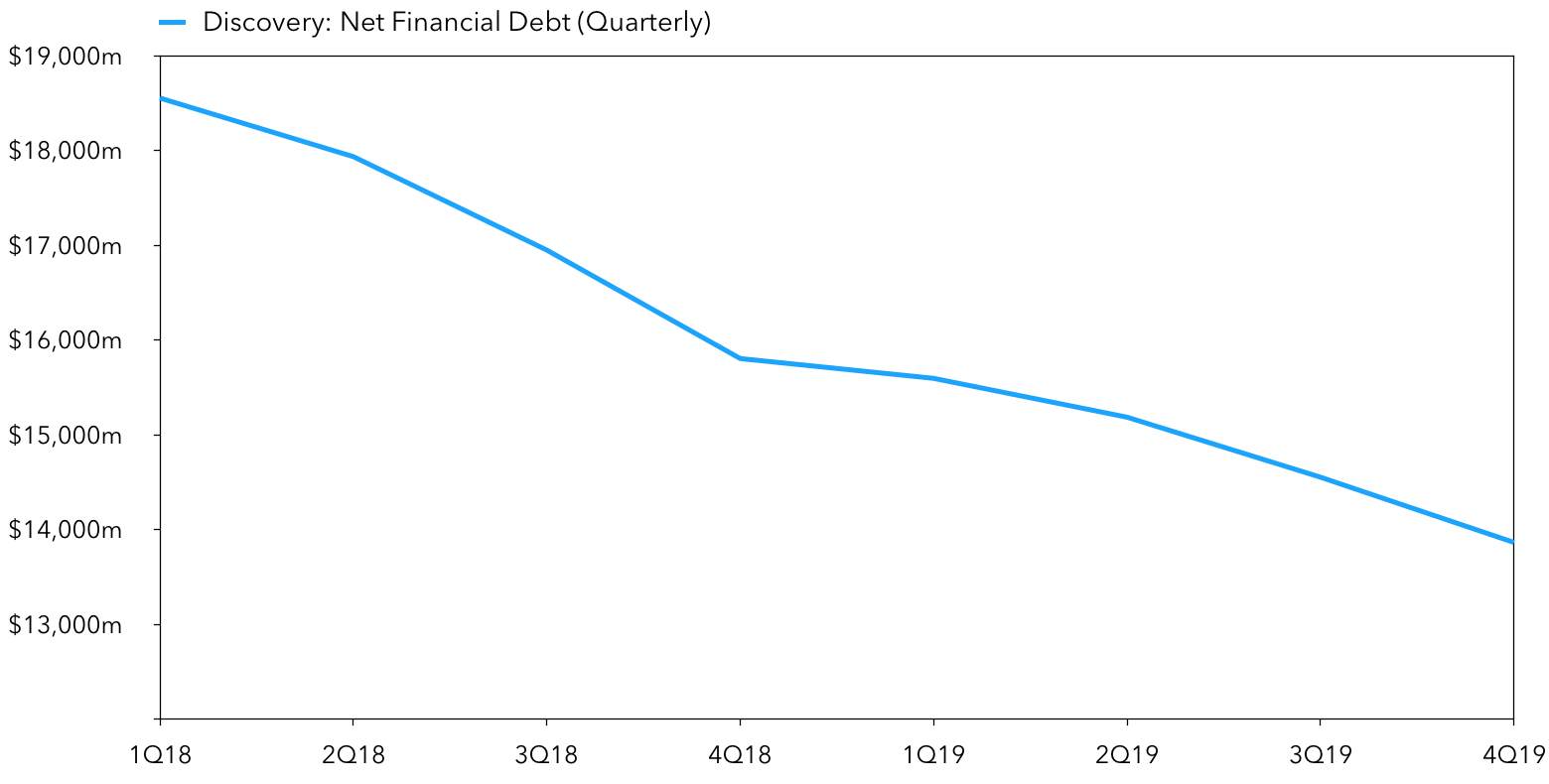 The stock is cheap right now. At time of writing the shares have just closed the week at around $18.75 apiece. At the start of the year, they traded over the $32 per share mark. In terms of profit guidance, the company expected somewhere in the $2,800m range in terms of annual free cash flow this year. Quick math puts that at around the $3.95 per share mark, which is equivalent to a current valuation of just 5x free cash flow. 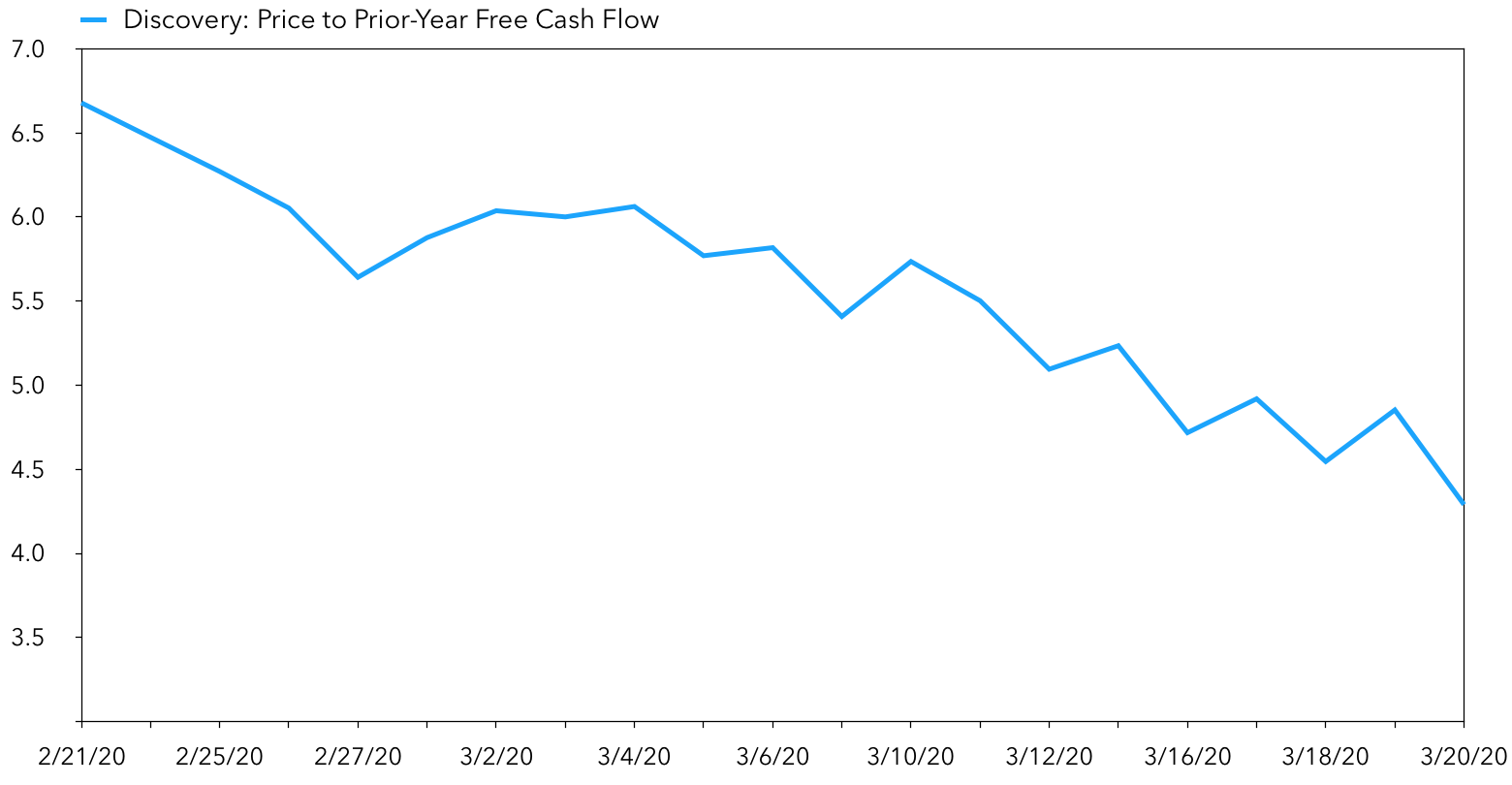 Even if that free cash flow number gets cut down to $2,000m in a recession, Discovery has plenty of leeway. Imagine if it spent $600m on debt retirement and the rest on stock buybacks. The debt retirement portion would obviously save it a small amount of future annual interest expense, and that figure would then drop straight down to the pre-tax income line. Great.

In terms of potential stock buybacks, $1,400m spent at the current share price reduces the share count by over 10%. Just think about that for a moment. The company could see free cash flow drop by 30%, while still meeting its debt obligations and reducing the share count by 10%. That’s how cheap this stock is right now.