From a long-term perspective, purer play oil & gas production companies make me a bit nervous. The reason for that is simple: they require constant vigilance in a way that other companies do not. Occidental Petroleum seems a good example of that in the current crisis. As a result of its ill-timed purchase of Anadarko Petroleum Corporation, it enters this downturn holding north of $35,000m in net debt on its balance sheet. For an even worse example, check out the bankruptcy of Whiting Petroleum.

That brings us nicely to ConocoPhillips (COP) stock. A few years back, the company spun off its downstream and midstream assets into a separate entity: Phillips 66. That’s the company that now deals with things like refining crude oil into end products such as jet fuel and gasoline. Nowadays, that means Conoco is a simple exploration & production company, albeit the largest listed one in the world. Its reservers totaled around 5,200m barrels of oil equivalent (BOE) at the end of last year.

Though I’d prefer it to remain a diversified business, there are still a couple of good things about the ‘new’ Conoco. Firstly, its operations look inherently low cost. Across all of its geographies, from Alaska to Asia, its cash production costs (including production taxes) came in at around $12.75 per BOE on average last year. My guess is that, right now, Conoco realizes an average price of around $25 per BOE.

Now, the company produced around 1.3m BOE per day on average last year. Management guidance points to a similar number this year. Quick math therefore suggests the company still generates somewhere in the region of $16m in gross profit every single day based on current commodity prices. Pretty impressive, all things considered.

The second, and more important thing to like, is its debt position. Conoco offers a textbook example of how to enter an energy price downturn in correct share. I mean, at the end of last year it sported around $14,900m in gross debt on its balance sheet. Though this number doesn’t look particular interesting, the company’s cash position is strong. It held around $5,100m in cash & equivalents at the end of last year, plus a further $3,000m in short-term investments maturing within a year (time deposits, Treasury Bills, and so on). Net debt therefore stood at the $6,800m mark at the end of 2019.

Furthermore, Conoco has virtually no debt due until the middle of the decade. In fact, a quick glance at last year’s annual report reveals that only $590m or so is due before 2024. It does have around $1,500m in additional asset retirement liabilities, though this doesn’t strike me as too onerous. Conoco can meet all of this with cash on hand quite easily.

How To Enter A Downturn

Conoco generated just over $11,000m in cash from its oil & gas production operations last year. It then spent $6,600m of that on capital expenditure in order to replace lost reserves. At an average realized oil price of around $60 per barrel, that translated into around $4,500m worth of free cash flow; a figure that easily covered last year’s dividend bill – around $1,500m – and left a chunk of change left over for share repurchases. 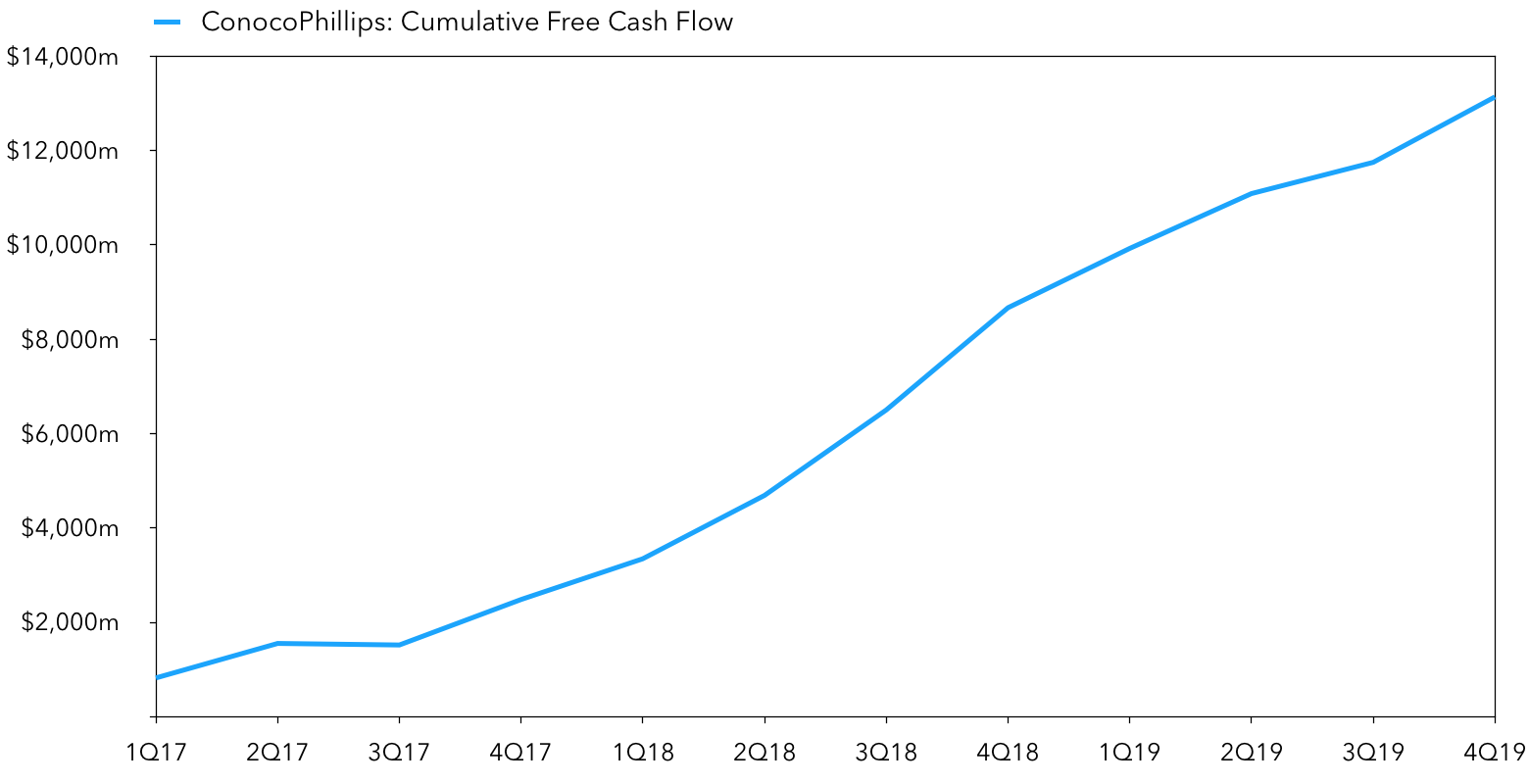 In a nutshell, that sums up why Conoco is in a relatively strong place right now. Since the end of the last downturn, it has realized an average price of circa $47.25 per BOE and generated around $31,000m in cash from its oil & gas operations. It also raised a further $17,500m or so from net asset sales. In the outflow column: a combined $31,500m on capital spending, dividends and stock buybacks. The net impact has been a circa $17,000m reduction in net debt. Put simply, that’s how you want to enter a downturn.

This year will clearly be much tougher. The price of oil currently trades around thirty bucks per barrel lower than Conoco’s 2019 realized average price. Demand has collapsed due to COVID-19, with some estimates putting the fall as high as 30m barrels per day. To put that figure into some context, it is roughly equal to the combined daily production of Saudi Arabia, Russia and the United States.

Getting a handle on how that impacts Conoco’s finances clearly depends on how the story plays out. Fitch, for instance, reckons average prices for 2020 will land in the $35/bbl range. Assuming that holds true, then back of the envelope math (plus some guesstimates on my part) puts Conoco’s realized price at around $25 per BOE for the year.

Using some very rough calculations, I reckon that hits it to the tune of around $7,000m in terms of annual cash flow. Based on its current capital spending budget, that means we’d be looking at annual cash outflow of around $1,800m. The dividend consumes another $1,800m, while it plans to spend a further $250m per quarter on stock buybacks. Let’s call it annual cash burn of around $4,500m based on the oil price forecast above. On that basis, I actually think the company can manage this downturn much better than most. If it lasts no more than a few quarters, Conoco should be fine.

The stock closed the week at just over the $32.90 per share mark, having closed as low as $22.65 a few weeks ago. Its $0.42 per share quarterly cash dividend currently yields just over 5%. Oil looks almost certain to head lower, which would no doubt drag the stock down with it. That said, I expect ConocoPhillips stock to return 100% within the next few years. Fortunately, the company can withstand lower prices for longer than most owing to its prudent management since the last downturn.