written by The Compound Investor January 14, 2020

In recent years it has been common to cite Coca-Cola (KO) stock as an example of blue chip dividend investing’s limitations. This argument typically comes in two forms. First, the lower level of shareholder returns realized over the past couple of decades. Second, the seemingly low level of revenue and earnings growth. Of course these points are often connected (i.e. the former being blamed on the latter).

My own view is that it would be a mistake to write off Coke stock on this basis. Firstly, let’s grapple with the ‘Coke stock has seriously underperformed’ point. Although I’ve discussed it on here before, it is periodically worth revisiting how insanely expensive Coca-Cola stock got in the late-1990s. I mean the headline figure looks bad enough. At its peak, the valuation reached somewhere in the 60-70x annual profit area. Turning that figure on its head gives us a peak earnings yield of just 1.5%.

It actually gets even worse once you take the interest rate environment into account because when the stock hit peak mania you could get 5% just through purchasing long-term US government debt. Compare that to today. Coke stock trades at an earnings yield of circa 4% versus the 1.82% you can get on Uncle Sam’s 10-year debt. Much more reasonable.

That leads nicely onto the second point: business growth. Analysts estimate that Coca-Cola made around $2.10 per share in net profit in 2019. Assuming that figure proves accurate, it would mean that the company earns just 40% more than it did a decade ago. Expressed as an annual average that works out to around 3.75% growth.

As I’ve written about before, foreign currency issues have plagued certain US blue chips for a while now. Although Coca-Cola now generates most of its sales outside of the United States, everything is reported through the prism of the US dollar because Coke is HQ’d in Atlanta and listed on the New York Stock Exchange. That prism includes its profit numbers and those dividend checks mailed out to your Aunt Mildred. 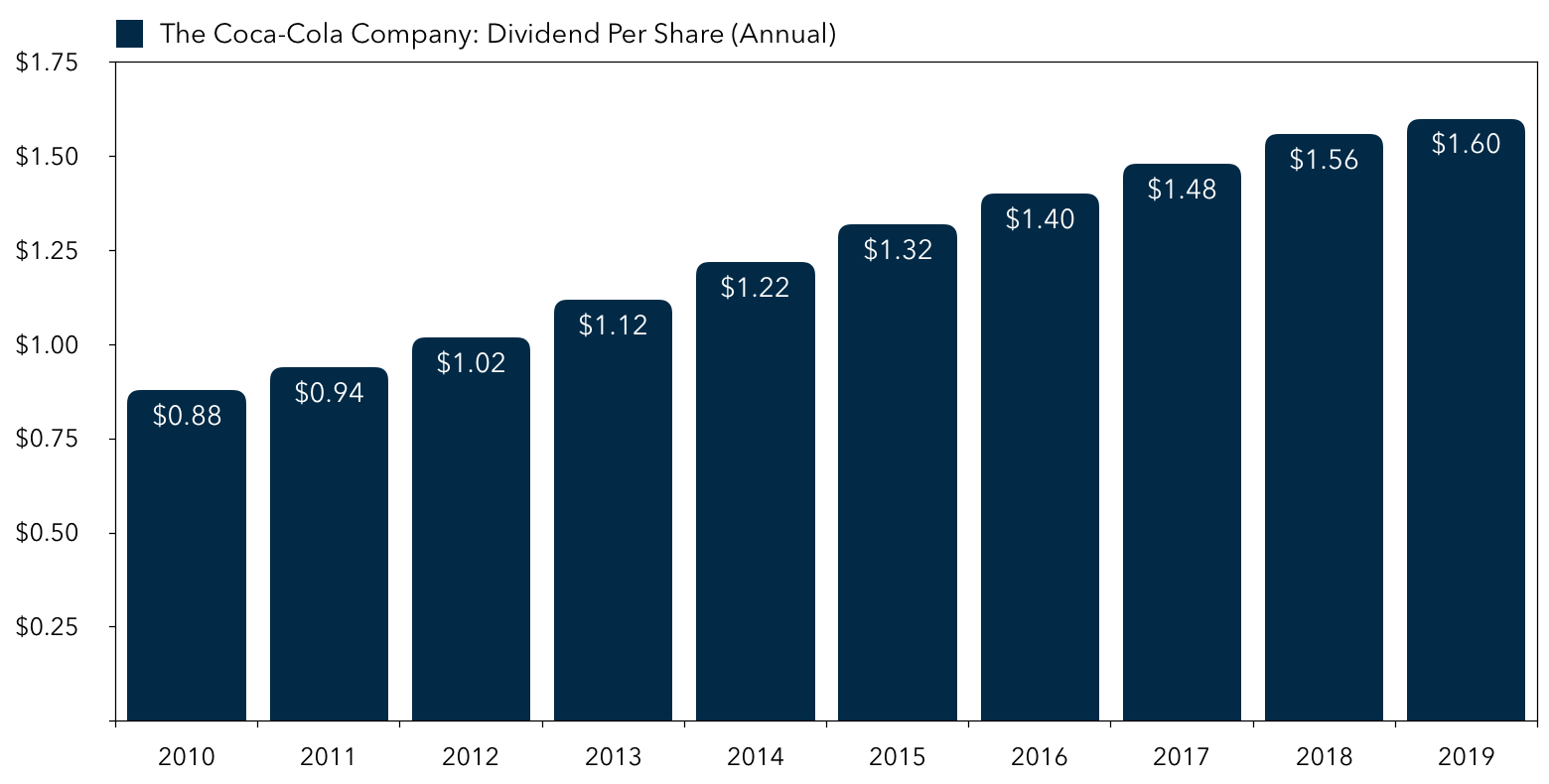 Now, while Aunt Mildred typically got to enjoy annual dividend growth in the 9% to 10% area, the last couple of years saw that fall to more like 5%. Although it looks and feels like the company is doing badly, the true underlying performance of the business is probably a good deal better. To cut a long story short, once you strip out negative foreign currency movements Coke’s figures improve noticeably.

The yardstick which I measure that statement against is Coca-Cola management’s long-term average earnings-per-share growth target range of 7% to 9% per annum. In order to meet that, the company has multiple streams that could chip in. I covered some of these in a post on Trademark Coke back in 2018 but I’ll recap the most obvious ones below.

First, it can grow sales via selling more of its product. This might come simply through population growth, per-capita increases in consumption, or some combination of both. For instance back in 1992 the average person consumed 46 Coca-Cola Company beverages per year. By 2012 that figure had climbed to 94. Over the same period an additional 1.5 billion people inhabited the planet. Needless to say these trends added a lot of dollars to Coca-Cola Company coffers. 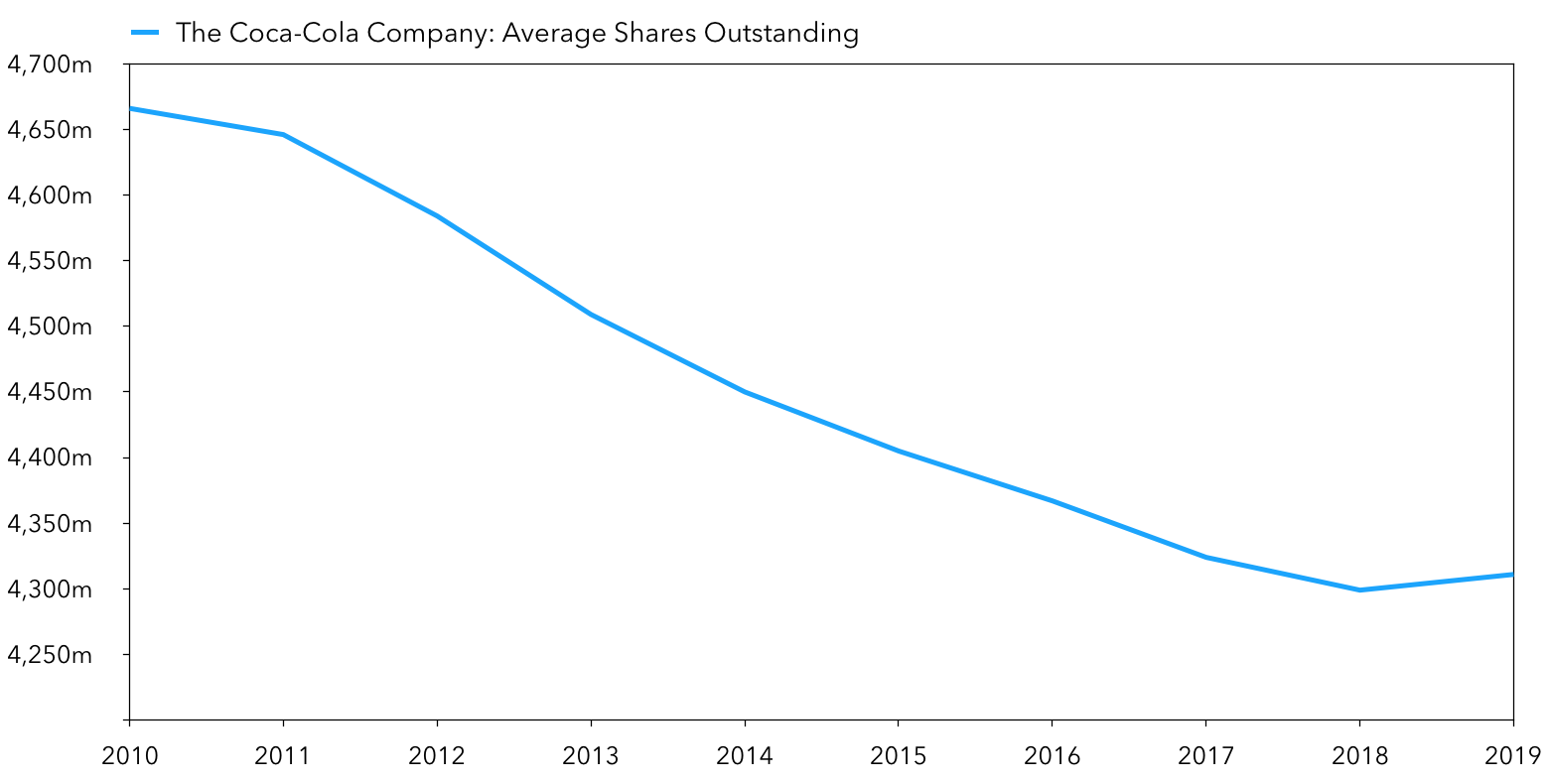 Second, it can use its free cash flow to acquire new businesses. The acquisition of British firm Costa Coffee for $5,000m (less than one year’s free cash flow to Coke) would be a recent example. It could also use the same to repurchase its own shares, thereby increasing per-share earnings and dividends for stockholders. Since it first started buying its own stock in the 1980s the company has spent circa $50,000m in total on net share repurchases. My math might be wrong but I have the company acquiring over 30% of its shares in that time frame.

There’s much more to say on the growth front but you get the point. Anyway, right now Coke stock trades at an earnings yield of approximately 4% and a dividend yield of circa 2.9%. 10-year Treasury Notes trade at a yield of 1.85%. Unlike the latter, the former can realistically grow in the 7% per-annum region notwithstanding the lower levels of growth in recent years.

That spread is interesting for all the folks out there that don’t like Coke’s current valuation. I’ve called these type of stocks expensive before but in relative terms they aren’t. Think Coke stock will yield a 4% dividend while growing at high single-digits a year? In my view it just ain’t gonna happen in this environment. If it did, it would probably be time to back up the truck. Contrary to popular opinion I don’t believe that now is an obviously bad time to buy shares of Coca-Cola stock for long-term investment accounts.

Disclosure: I own shares of The Coca-Cola Company.