As I type, Chevron (CVX) stock has just ended the day down 3.9% after posting its fourth quarter 2019 results. Exxon Mobil looks like it was in the same boat having also released quarterly results on Friday morning. Given Royal Dutch Shell also dropped 3% on Thursday’s open (again after releasing financial results), we now only need BP to drop by a similar amount when it reports next week in order to score a full house.

In many ways I think California-based Chevron is currently where Exxon Mobil will be at in a few years’ time. That is to say it is now pumping out a fair bit of surplus cash having gone through a period of very high capital spending a few years ago. By my count Chevron has now generated circa $35,600m in cumulative free cash flow since the beginning of 2017 (having spent around $41,000m on CapEx over the same timeframe). Nevertheless it has just taken a beating in a what has been a brutal day for the markets.

Anyway, onto 4Q19 results. In terms of the headline numbers the company made a rather ugly looking $6,600m quarterly loss, albeit one that was heavily impacted by non-cash asset impairment charges. Net income over 2019 as a whole clocked in at just $2,900m for the same reasons. To provide some color to those numbers Chevron booked a total of $10,400m in impairments & write-offs, most of which came from impairment charges in related to its Appalachian shale gas assets and its Big Foot project in the Gulf of Mexico.

It’s no secret that natural gas prices in several prolific producing basins in North America (including Canada) have been absolutely crushed in recent years. The situation got so bad last year that prices actually went negative in parts of the Permian Basin in Texas. Similarly, a lower oil price outlook forced the impairment over at the Big Foot project. Stripping those charges out of the equation gives us quarterly net income of circa $2,900m (around $1.55 on a per-share basis) and annual net income of $11,900m for 2019 (approximately $6.35 per share).

The macro environment has also played its part. The situation with oil and gas prices is obviously pretty well known and commented on. Last year Chevron realized a liquids price of $47 per barrel in the United States, down around 15% on 4Q18. At $1.10 per thousand cubic feet, its realized natural gas price tanked nearly 50% in the United States compared to the same point in 2018.

Something you hear slightly less about are the conditions facing refiners and chemical producers. Although Chevron is a lot more Upstream than Downstream, that latter still contributed around $1,500m to company-wide profit last year. Anyway, refinery margins are pretty poor across the board at the moment. In 2018 the company posted full year Downstream profit of just over $2,000m, or some 33% higher than the 2019 figure.

Here’s what I like about Chevron stock. As it stands it looks like the earnings power of the company is somewhere in the $12,000m per annum region. Call that $6.40 per share based on the weighted average share count of 1,872,317,000 in 4Q19. At $5.16 per share, its annualized dividend commitment runs to about $9,600m in cash terms. Or put another way, Chevron is covering its dividend – even in the current macro environment. 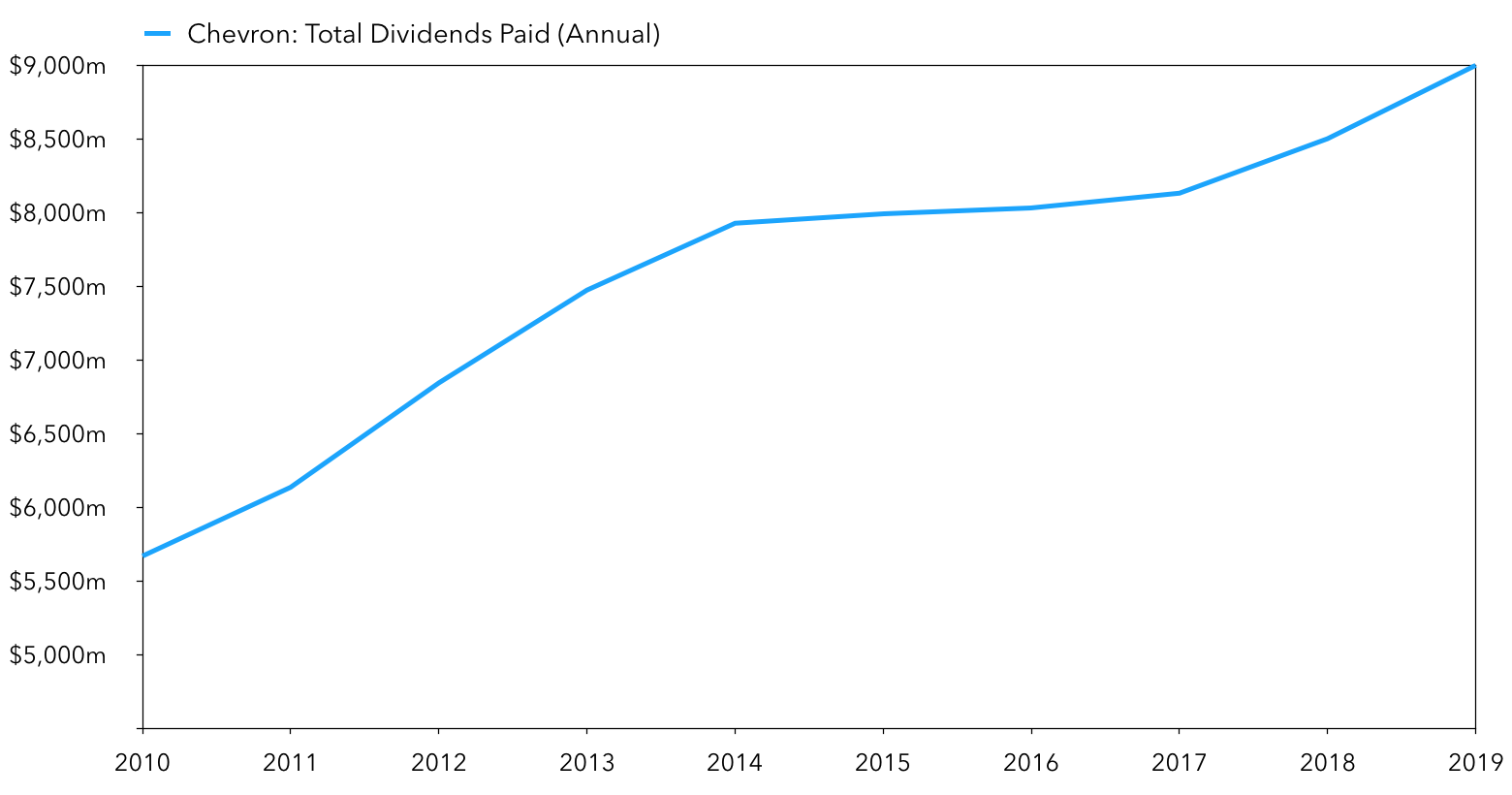 Last year Chevron put that surplus cash toward share repurchases, retiring somewhere in the region of 40m shares from the float if my math is correct. As I said in a piece covering Royal Dutch Shell’s results, self-funded stock buybacks make financial sense for certain oil majors right now. In Chevron’s case the balance sheet is in pretty conservative shape (it could probably annihilate its net debt position within a few years at current oil prices if it wanted to), and buybacks have the added benefit of potentially putting the dividend bill on a more sustainable footing.

As it stands Chevron stock trades at just under $107 per share. Based on earnings of around $6.40 per share the stock trades at just under 17x annual profit. Being an oil & gas company, we then have to compare that P/E ratio to prevailing commodity prices. For instance when oil prices are high, the P/E ratio might be deceptively low (because the “E” in that equation is very large). Conversely, when prices are low the P/E ratio might be negative or infinitely large. Counter intuitively it is the latter that usually represents the more attractive entry point.

On that note, where do we stand right now? As a general rule of thumb if an oil major trades at a ‘normal’ looking valuation in a period of unremarkable oil prices it is probably an okay deal. On the basis of a 16.7x earnings multiple and a 4.8% dividend yield (and with Brent crude in the $58 per barrel range) I would put Chevron in that bracket right now.

Disclosure: I own shares of Chevron stock.

Apple Stock Returns Over 100% In A Year