Catching Up With The St. Agnes Stock Portfolio (2019)

It has been just over three years since I wrote about the hypothetical returns from the St. Agnes stock portfolio. This story featured in Peter Lynch’s early-1990s book, Beating The Street, and was basically a  classic ‘buy what you know’ portfolio. The remarkable simplicity of the stock selection process is best illustrated by telling you that it was developed by seventh graders. You can take a guess at the kind of names they were churning out (and yes, it did include Disney).

Anyhow, it turned out these kids could intuitively pick big long-term winners. By my count the portfolio had nearly ten-bagged in 27 years (N.B. I assumed equal-weighted starting investments). Not only that, but I based that calculation on just five stocks: Disney, Nike, IBM, Walmart and PepsiCo. I ignored the likes of Mobil and Gap, as well as the portfolio’s losers (including Chapter 11 names like L.A. Gear). That aside, it strikes me as impressive that even after writing off 65% of the starting constituents those kids picked a portfolio that would compound away at double-digit clip. Good job.

I got to thinking how the last three years would have impacted the portfolio. Obviously the ripping bull market has been good to those names from a capital appreciation perspective. When I signed off on that article the value of those five stocks would have been worth around one million dollars based on a $50,000 initial block investment in 1990 ($10,000 per stock).

Quick math suggests the $50,000 starting capital has compounded at around 12.5% per annum on average over the past thirty years. What about the value of the other constituents? Well, the reason I wrote them off initially was to make the following point about diversification and compounding: you only need a few big winners to more than make up for the odd 100% wipeout.

Just to really hammer home the point, I wrote off nine out of the fourteen starting names even though stocks like Mobil (now part of Exxon Mobil) would have contributed significantly to the outcome. By my count the $140,000 capital outlay (i.e. fourteen positions initially worth $10,000 each) has compounded away at a rate of 9% per year, with that figure based only on the returns from IBM, Nike, Disney, PepsiCo and Walmart stock.

Believe it or not it actually gets even better for a couple of reasons. First, I haven’t (yet) included cash dividends. If you let them pile up in a broker account you’d be sitting on around $200,000 as I type. Second, I haven’t included any spin-offs such as Tricon Global Restaurants from PepsiCo. (Note: Tricon is now called Yum Brands! and owns KFC, Pizza Hut and Taco Bell).

As far as I am concerned, the income potential of the portfolio is actually more interesting. Let’s face it, a big chunk of the capital appreciation is due to expanding valuations, which works both ways. (Imagine we entered a bear market in 2019 which wiped out all of the stock price gains from 2016. Suddenly, things wouldn’t look so impressive).

Here’s where it gets interesting. Between them, Nike, IBM, Disney, Walmart and PepsiCo have increased per-share profit by an average of 10% since 2016. Some have obviously done better than others, but on the whole they earn more now than they did three years ago. 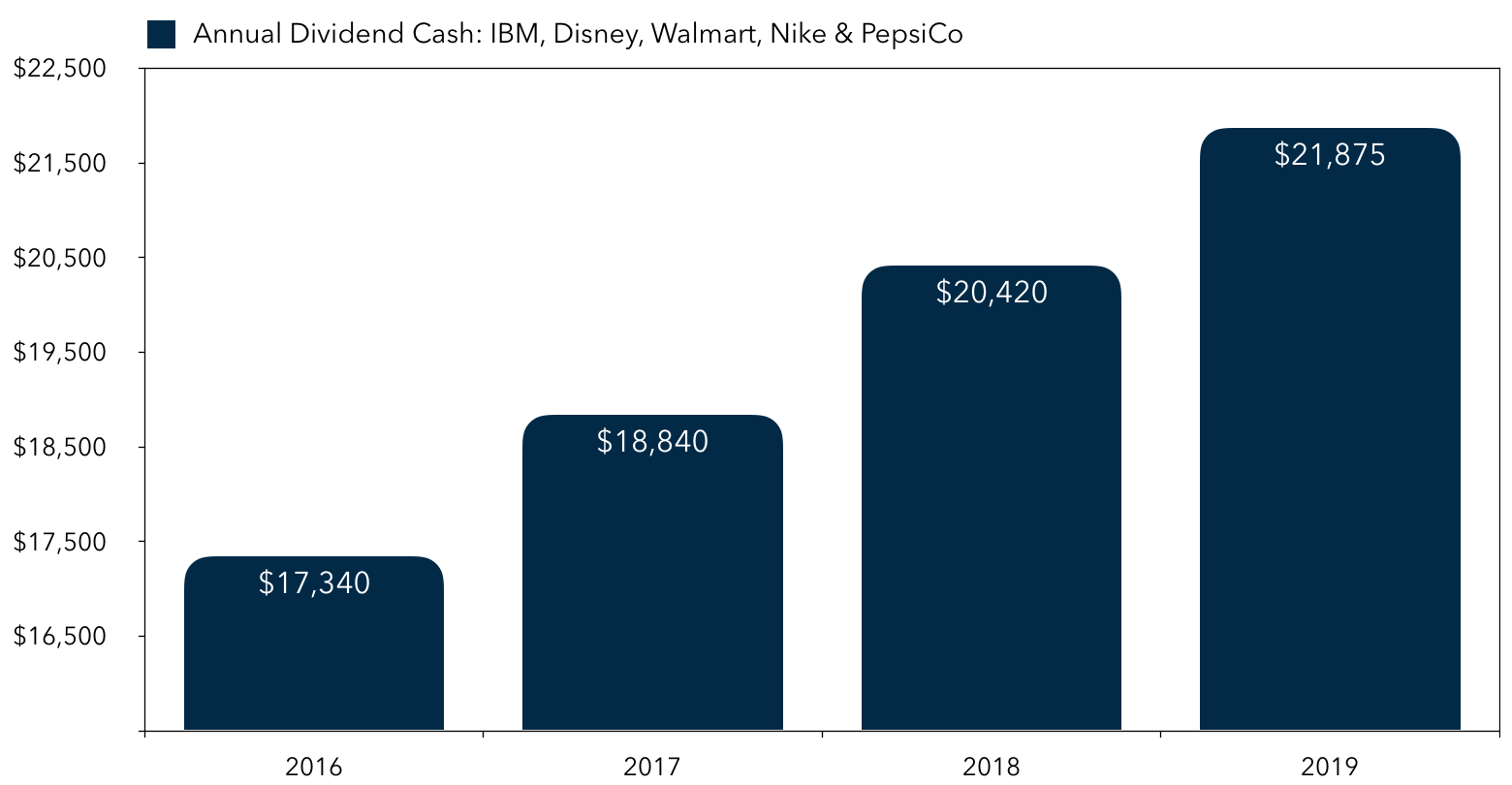 In the last post, looking at the remarkable story of Phyllis Stone, I referred to this as the ‘magic of compounding’. Maybe I should have called it ‘late stage’ compounding instead. I say that because nobody gets excited when their dividend income starts out as little more than beer money. But when you combine the trio of underlying dividend growth, dividend reinvestment and regular savings (directed from your labor to asset ownership) with a couple of decades’ worth of stewing time, you can end up with a life-enhancing income stream at the end.

What If All You Did Was Regularly Buy Procter & Gamble Stock?