One reason I find Peter Lynch’s books so enjoyable to read is because they have thoroughly stood the test of time. There’s nothing like diving into stuff written thirty years ago and finding many of the principles apply just as well today as they did back then. Take the St. Agnes portfolio for example. This story featured in his 1993 book Beating The Street and covers a stock portfolio constructed by students at the namesake school in Arlington, Massachusetts.

Now, I’ve deliberately chosen this as a reference for two reasons. One, the students who built the portfolio were seventh graders. I guess it is unlikely that they will have been poring over balance sheets and stressing about profitability metrics. Or put another way, it really is just about buying ‘what you know’. Two, the story dates back to 1990, the year I was born. On that basis, it offers a pretty neat guide as to what could have been achieved during my life to date.

The actual composition of the portfolio consisted of 14 stocks: Walmart, Nike, Walt Disney, PepsiCo, IBM, Mobil, Gap, NYNEX, Topps, L.A. Gear, Food Lion, Savannah Foods, Pentech International and Limited. I deliberately ordered them like that since readers will be much more familiar with the first half of the group. I’m sure Walmart, Nike, Disney and PepsiCo need absolutely no introductions whatsoever. Mobil is of course now part of Exxon Mobil, and its history goes all the way back to John D. Rockefeller’s original Standard Oil. IBM has been a blue chip for decades, and Gap is a well known apparel chain.

The second group of seven stocks is probably less well known. I won’t dwell on them too much but among the businesses are manufacturers of sneakers (L.A. Gear), pens & markers (Pentech International) and trading cards (Topps). You can see why seventh graders might choose them on a ‘buy what you know’ principle. Oh, and neither can it be said that this portfolio suffers from any survivorship bias. This was real time stock picking back in 1990, and the portfolio contains its share of duff investments as proof of that. I’ll focus specifically on the first five names on the list: Walmart, Nike, Disney, PepsiCo and IBM.

Let’s assume as an investor that you decided to mirror the St. Agnes portfolio back in 1990. That would have meant those five names accounted for just over one-third of your starting capital assuming equal-weighted investments. Call it $10,000 for each stock, or a total portfolio value of $140,000, of which those five make up a $50,000 block. At the time, that would have meant you picked up 1,724 shares of Walmart stock, 11,534 shares of Nike stock, 1,036 shares of Disney stock, 967 shares of PepsiCo stock and 408 shares of IBM stock. (Note: All figures adjusted for subsequent stock splits). 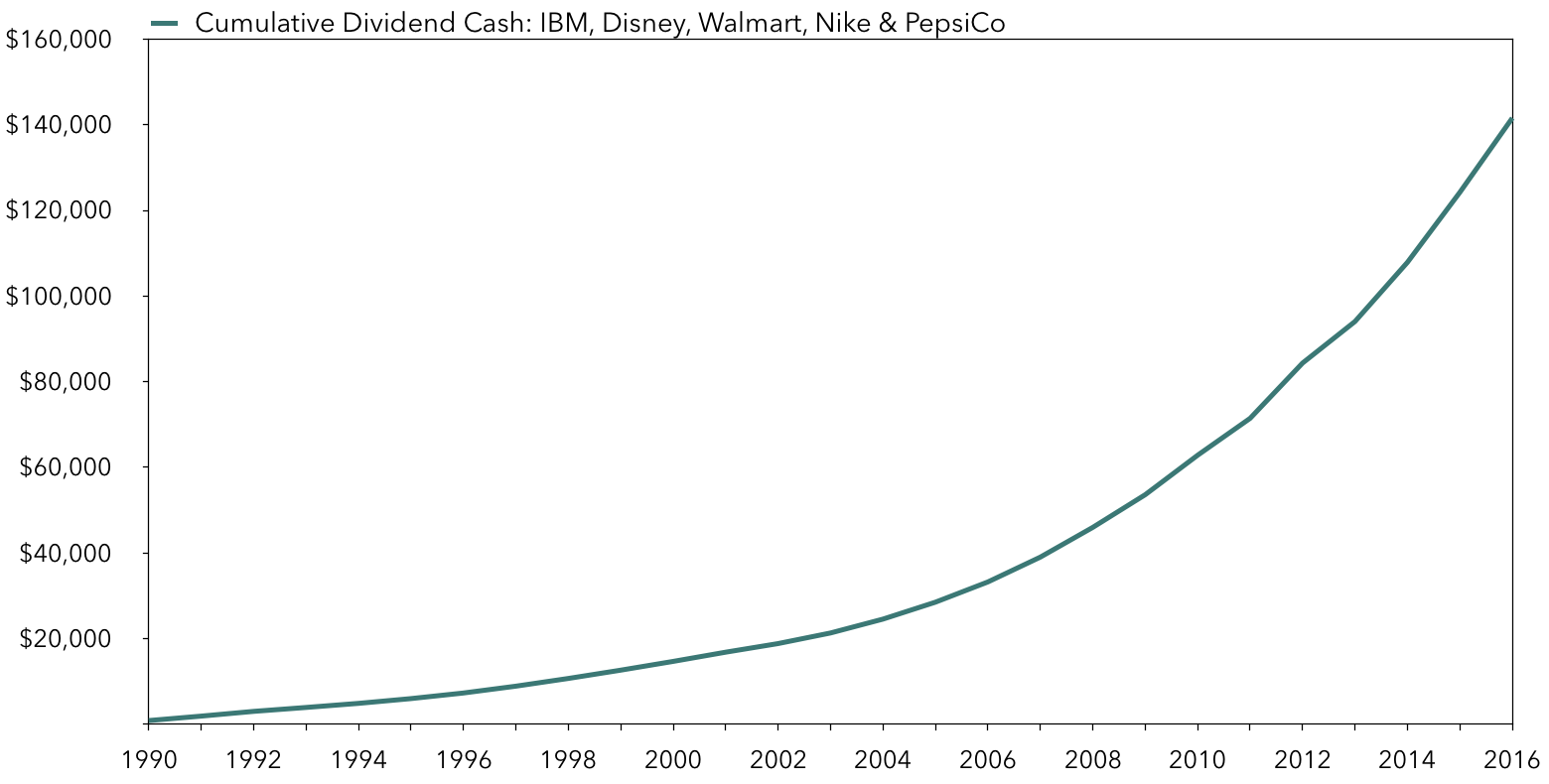 Remember, that figure only covers the five stocks mentioned above. It doesn’t take into consideration the returns from any of the other nine. It doesn’t take into account all the cash dividends and current value of what would now be a chunk of Exxon Mobil stock, for example. Nor does it include shares in Gap stock, which would currently be worth around eleven times what they were at the start of 1990 (plus a nice pile of dividend cash).

It doesn’t take into account any spin-offs, such as Yum! Brands, which was spun-off from PepsiCo back in 1997. Finally, it says nothing about the effect of reinvesting dividends along the way. Needless to say, that adds quite a bit extra to the total return figure.

When you read comments sections on Seeking Alpha articles you often get the impression that far too many folks are trading these blue chips over the short-term. If we were talking exclusively about stocks in cyclical industries that would be perfectly understandable.

Take General Motors and the car industry for example. Now, General Motors is a company that probably everybody has heard of. It has ubiquitous products, has been around a long time and would qualify for a ‘buy what you know’ portfolio. Despite that, if you held the stock over the past five decades then you’d have barely seen post-inflation wealth creation. That is just the nature of automobile manufacturing.

You can’t really say that about the likes of PepsiCo. This is why it’s strange to see comments of folks who have held, very often for rather short periods of time, saying that they have sold up because of fears surrounding healthy eating (to use a common reason right now). As the St. Agnes portfolio aptly demonstrates, even a small number of “winners” will more than make up for the losers over the long-run.

Computershare Is Great For Long-Term Investing