written by The Compound Investor November 13, 2016

With regards to quality blue chips Kimberly-Clark (NYSE: KMB) stock sums up the current market situation quite well. Back in 2010 the company generated $19.75 billion worth of sales from brands such as Kleenex and Huggies, of which $1.85 billion ended up as after-tax net profit. On a per-share basis those figures work out as $48.05 and $4.45 respectively based on a total number of 411 million shares outstanding in 2010. In the last full full financial year, that’s fiscal year 2015, the company reported $18.59 billion in sales of which $2.11 billion ended up as net profit (I’ve adjusted for one time charges here). On a per-share basis that translates to $50.75 and $5.76 respectively.

So to sum up you’ve seen relatively flat sales and income, boosted on a per-share basis by the company retiring their own shares. To be more precise that boost worked out to an extra 2.65% a year in terms of the bottom line earnings-per-share compared to actual company income. Now let’s look at the shareholder returns.

At this point in 2010 Kimberly-Clark stock was trading on the market for $59.50 a share, with $2.58 per-share in dividends paid out over the year. Right now those shares are going for around $113 apiece, whilst a further $19.30 per-share in dividends has been paid out in between. Even without calculating the specifics you can see that a huge chunk of those returns must have come from the change in valuation applied to the stock. And sure enough when you break it down you get total returns of approximately 15% a year, of which around 8.50% came from earnings growth and dividends with the rest coming from multiple expansion.

This has obviously been a common theme with these kinds of blue chip dividend stocks. We came off the back of a monumental economic crisis and market crash to a point where valuations started to look very attractive again. If you break the valuation figures down for Kimberly-Clark stock then at this point in 2010 you were looking at a P/E ratio of about 13.5x earnings and a 4.3% dividend yield.

Considering it’s a company that basically sells tissues and toilet roll you could pretty much dump the stock into the high quality buy-and-hold forever category if you were buying at those prices. It always reminds of that running gag in the film Demolition Man where Sylvester Stallone wakes up years in the future in a world that’s managed to replace toilet roll with three seashells. Unless that somehow becomes a reality I like Kimberly-Clark’s chances of staying around for the next few decades.

I mean it’s a company that has already registered 144 years on the clock as it is, with a stock that has paid a dividend in each of the last 82 of them. Oh, and it has increased those distributions in each of the last 44 years in a streak that goes back to the early 1970s. What’s not to like? Well, the only thing you don’t really get to say is that there’s going to be a lot of organic growth. But that was the great thing about being able to pick it up at 13.5x earnings and a 4.3% dividend yield covered easily by earnings, as was the case back in 2010. Even better if you managed to do so during the financial crisis where, over the course of 2009, the stock averaged a valuation that was around 12x earnings with a 4.3% dividend.

The compounding nature of businesses like that mean they can write their own growth. Just check out how many of their own shares the company have retired over the years. A decade ago there were a total of 456 million shares outstanding. As of the third quarter of 2016 there were 361 million. When you combine that kind of synthetic growth with a dividend yield of 4.3% it only needs very modest earnings growth to get double figure annual returns quite easily. 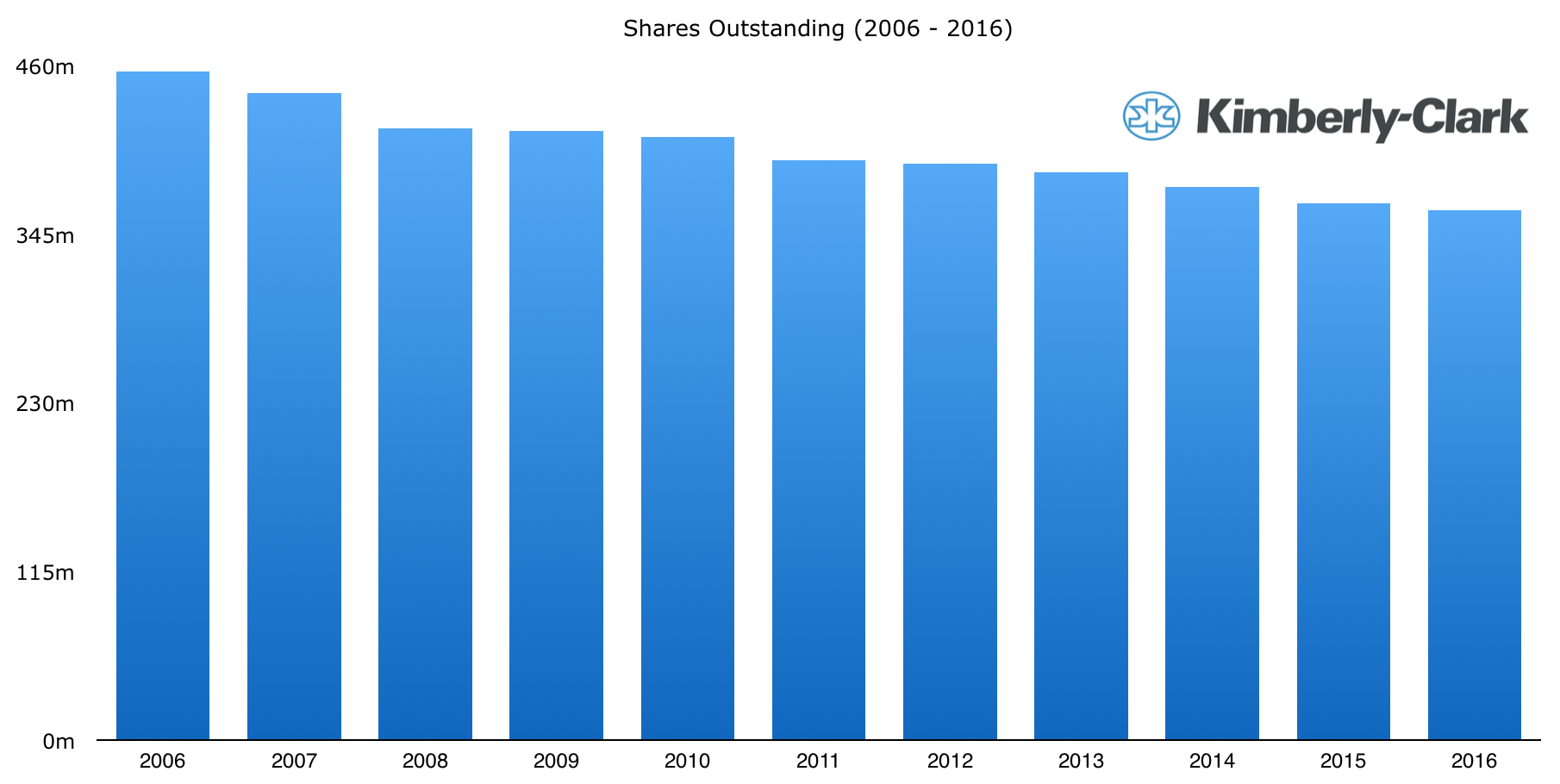 Okay, so that was the lay of the land back in the value days of 2009/2010. What about now? Well we’ve seen the valuation multiple applied to the stock expand from 13.5x earnings to around 19x. That has boosted returns enormously. When you’ve got a company that’s struggling to post growth that becomes a bit of an issue for anyone buying the stock today. It’s not an issue for the business per se; as you can see above a great quality business that has low growth can be extremely attractive at the right price. But it is an issue for the stock, which is basically where we find ourselves with Kimberly-Clark today.

A few months ago the share price hit an all time high around the $138 mark. This year the company are on course to earn around $6.00 per-share in net income, which would have therefore valued those shares at about 23x annual earnings. If, or rather when, the valuation reverts to something closer to the historical average (which since 2000 has been about 17x earnings) then it’s obviously going to negatively impact shareholder returns. Since then the share price has dropped close to 20% and is now trading at around $113, which would put the shares at just under 19x earnings.

Okay the growth situation probably isn’t great, but a decent portion of that is due to the foreign exchange issues brought on by the strong dollar. When that clears up, and given that the annualized dividend is around the $3.65 mark (3.25% yield), then eventually there’s going to be some kind of floor to the price decline. The stock may not be screaming value right now but it’s getting there, and given how high quality the earnings are then it’s certainly one to keep on the radar.